Lt. Col. George Nichols, the 86th Civil Engineer Squadron commander at Ramstein Air Base, Germany, talks to families at a town hall, Monday, June 11, 2018, on Vogelweh. Thirty-one families in two multistory housing complexes on Vogelweh are being directed to move after the collapse of the drywall ceiling in a housing unit. ()

Lt. Col. George Nichols, the 86th Civil Engineer Squadron commander at Ramstein Air Base, Germany, talks to families at a town hall, Monday, June 11, 2018, on Vogelweh. Thirty-one families in two multistory housing complexes on Vogelweh are being directed to move after the collapse of the drywall ceiling in a housing unit. () 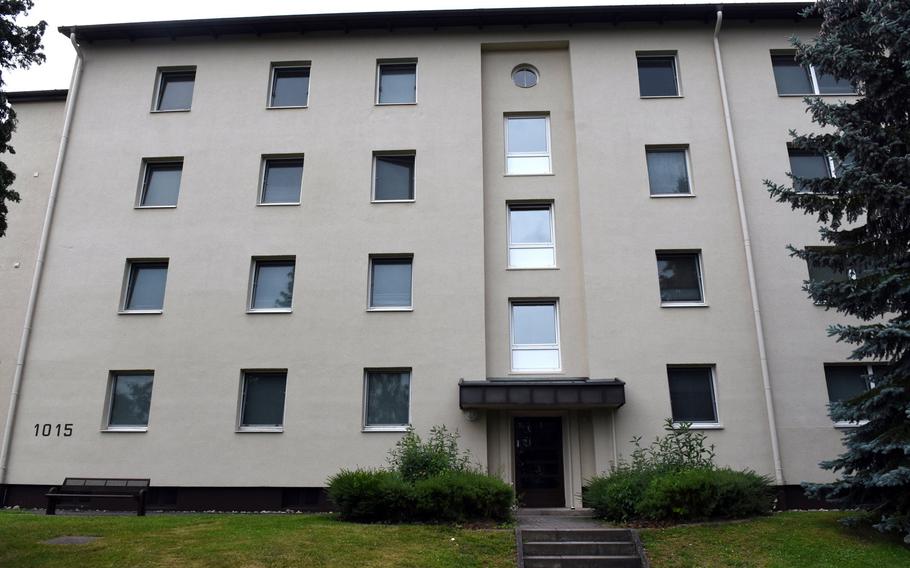 The drywall ceiling inside this family housing building on Vogelweh near Kaiserslautern, Germany, collapsed on Tuesday, June 5, 2018. No one was injured, but 31 families in two multistory housing complexes on the base are being directed to move after last week's collapse. ()

KAISERSLAUTERN, Germany – Air Force housing officials are preparing to move 31 families from two Vogelweh multistory housing complexes as quickly as possible after an apartment ceiling collapse that brought down a fan and lighting fixtures.

Twenty-one Army families and 10 Air Force families living in Buildings 1015 and 1019 will be relocated, officials said Monday at a town hall meeting at the Kazabra Club on Vogelweh. They’ll have the choice of moving to a similar apartment on Vogelweh or off base, at government expense.

“There’s no imminent danger,” Lt. Col. George Nichols, the 86th Civil Engineer squadron commander, told six families at the meeting. But “we recognize a ceiling has collapsed and we need to do something about it.”

Nichols did not have any estimates of the cost of repairs.

No one was hurt in the June 5 incident in Building 1015. But civil engineering officials believe the plastic fasteners used to anchor the drywall ceiling to the concrete floor above it may be the reason it didn’t hold.

Civil engineer experts found following the collapse that plastic anchors were used to attach the ceiling drywall throughout Building 1015 and in Building 1019.

It’s believed the plastic anchors have been in place since 2001, when the two buildings were renovated by the same contractor, officials said.

“The chances of having another (incident) we hope are slim; however, no one knows,” Nichols said. The anchors “lasted 17 years … there are so many factors that are unknown as to exactly why it occurred.”

Buildings 1015 and 1019 were the only ones known to be renovated at the time by the same contractor, he said. In Building 1016, by contrast, metal ceiling anchors are in place. The contractor has since gone bankrupt and is no longer doing work on base facilities in the Kaiserslautern Military Community, Nichols said.

“We have zero indication that we have this issue systemic across Ramstein, in all 2,000 homes,” he said.

The Air Force is consulting with Landesbetrieb Liegenschafts und Baubetreuung, or LLB, the construction management and contracting agency of the state of Rheinland-Pfalz that oversees “the German side of construction” on bases, Nichols said. Officials are going “to explain to them what we think is the issue. They may come out and do their own testing,” he said.

Families will immediately be moved to temporary housing on Vogelweh within the next week or so, where vacant units will be outfitted with loaner furniture from the government. They’ll have about five days to move personal belongings to the new units, though that time frame could be extended on a case-by-case basis. They can choose to remain in those apartments or move off base.

Officials said Monday that movers would be able to move the rest of their belongings in July. Families also have the option to move their own furniture sooner and get reimbursed.

Army Sgt. Jalessa Knighton is already in temporary lodging. The ceiling collapse occurred in her apartment in Building 1015. She and her 1-year-old son weren’t home at the time.

“We were gone for maybe 30 minutes,” she said Monday. “We went to the commissary so I could get him some milk and then we came back.”

When Knighton returned, “it looked like the ceiling was snapped in half,” she said. “I had to turn back around and come back in and make sure I was in the right place.”

Knighton, a transportation management coordinator for the 21st Theater Sustainment Command, said that she feels “overwhelmed” but that housing officials have been helpful, ensuring her expenses for temporary lodging are covered. She’s moving into a townhouse on Vogelweh later this month.

Other residents of Building 1015 at the town hall Monday said they were home at the time of the ceiling collapse but didn’t hear anything.

Khristin Marmolejo, an Army spouse who lives above Knighton, said the last week has been stressful, as she’s been alone with her two children while her husband is away on a mission.

Air Force officials said they gave residents the option of leaving their apartments for temporary lodging but no one chose to do so.

Katryna Camacho, also an Army spouse, said she’d like to see the Air Force provide additional compensation to cover incidental expenses. “If you’re moving from one house to another, there’s a lot of extra things that you have to do,” from additional cleaning to meals out, she said.

She and her family haven’t been in their apartment for very long, having received their household goods in February.

“I’d rather move,” she said. “I mean, it sucks, but knowing what could happen, I’d probably rather move.”