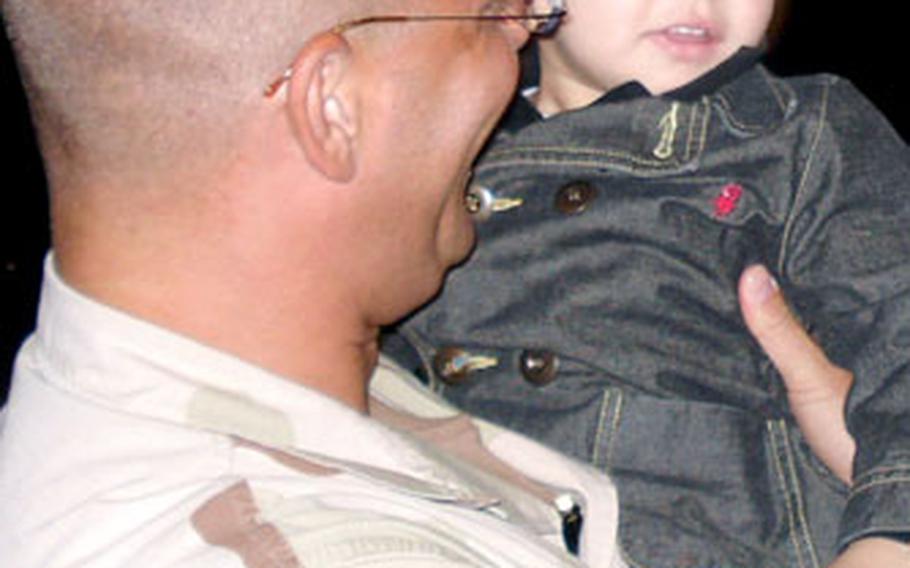 Master Sgt. Donald Villars of the 23rd Fighter Squadron holds his son, Daniel, on Saturday at Spangdahlem Air Base in Germany after returning from a 2½-month deployment to the Persian Gulf region. (Diane Weed / U.S. Air Force)

Master Sgt. Donald Villars of the 23rd Fighter Squadron holds his son, Daniel, on Saturday at Spangdahlem Air Base in Germany after returning from a 2½-month deployment to the Persian Gulf region. (Diane Weed / U.S. Air Force) 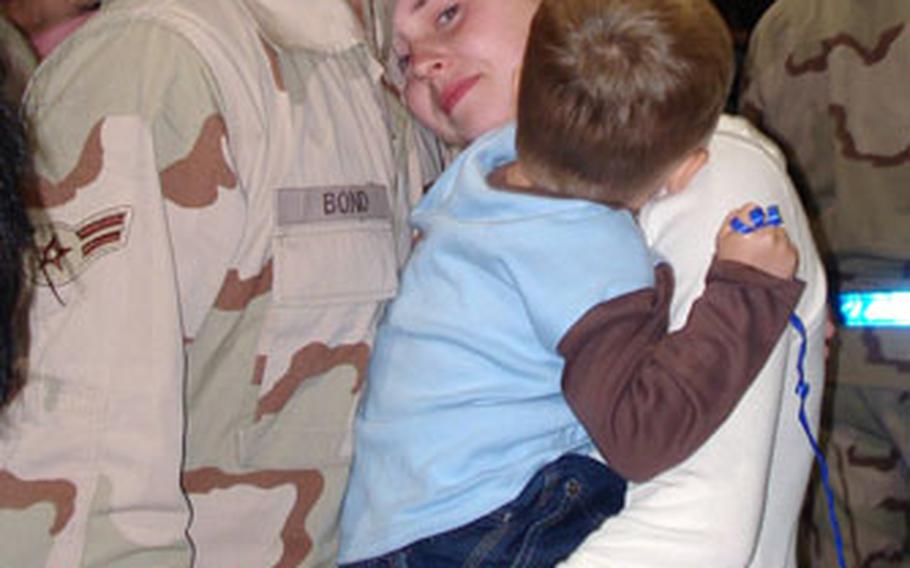 KAISERSLAUTERN, Germany &#8212; The remainder of the 23rd Fighter Squadron returned home to Spangdahlem Air Base on Saturday after a 2&#189;-month deployment to the tiny Persian Gulf nation of Qatar.

About 230 airmen greeted family and friends just before midnight after an eight-hour flight from the Middle East, said Air Force Capt. Diane Weed, a spokeswoman for the 52nd Fighter Wing, the base&#8217;s host unit.

After arriving at Spangdahlem by military transport plane, airmen lined up outside Hangar 3 as anxious family members waited inside. When the large hangar doors opened, family members rushed to greet the returning airmen, Weed said.

The F-16 squadron deployed to a base in Qatar and provided close air support for U.S. and coalition ground troops in both Iraq and Afghanistan. Six of the unit&#8217;s pilots and F-16s were the first to come home from the deployment, landing at Spangdahlem on Labor Day.

The bulk of the unit arrived Saturday night. Many of the airmen will be taking time off before returning to work.

Master Sgt. Donald Villars held his son, Daniel, on Saturday in the emotional return. He planned to take the family to Disneyland in Paris on his leave, Weed said.

Senior Airman Cody Bond and his wife, Kristy, will be planning for another child. His wife found out during his deployment that she is pregnant.

Most of the airmen are expected to be back at work by the end of October, Weed said.

Spangdahlem has other airmen who are still deployed, but most of them will return soon. The 81st Fighter Squadron and the 606th deployed earlier this year and are scheduled to return later this month, Weed said.

The 81st, which flies the A-10 Thunderbolt II, is in Afghanistan. The 606th is at an undisclosed location in Southwest Asia.