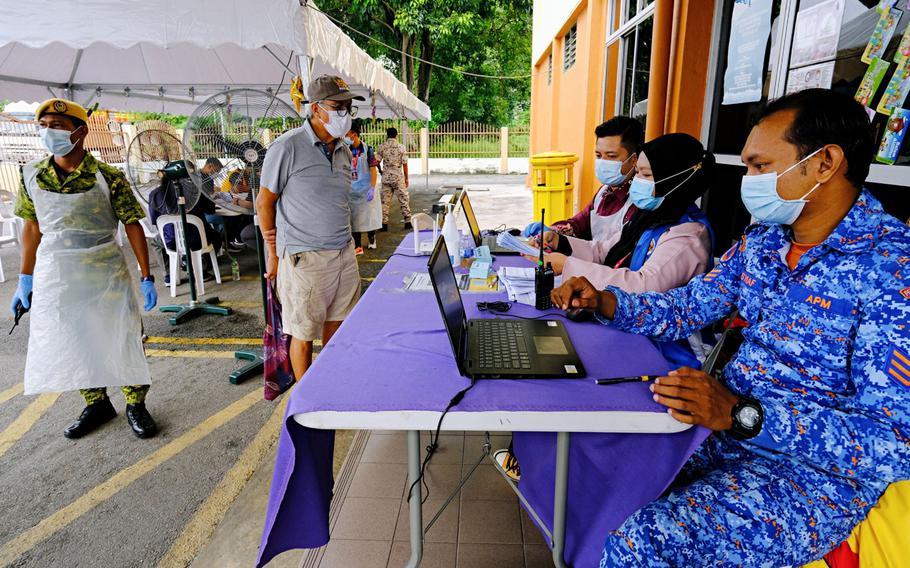 Health workers register people to receive a dose of the Sinovec COVID-19 vaccine at a vaccination center set up at the Pandamaran Sports Hall in Port Klang, Selangor, Malaysia, on May 20. (Samsul Said/Bloomberg)

Malaysia on Saturday detailed further restrictions on movements to contain a record surge in COVID cases.

Businesses will only be allowed to operate from 8 a.m until 8 p.m. daily from May 25, Defense Minister Ismail Sabri Yaakob told a briefing. About 80% of government officers and 40% of private sector employees will work from home, with the move affecting 7 million to 8 million workers.

High-risk places will be shut immediately and usage of public transportation will be limited to 50% capacity, Ismail said. The Trade Ministry will announce further guidelines for the economy, he added.

The moves are an attempt by Prime Minister Muhyiddin Yassin to tamp down new infections without derailing the nascent economic recovery by imposing a nationwide lockdown. Malaysia's economy lost about 700 million ringgit ($169 million) a day when only essential sectors were allowed to operate in January.

"Life is important; I also don't want the economy to collapse," Muhyiddin said in an interview with state-owned RTM television on Sunday. "If the economy collapses, I may have to spend half a trillion now. That's what we have learnt over time. We have to balance. The government's decision is based on the situation."

Finance Minister Tengku Zafrul Abdul Aziz estimated that the curbs could result in a 1% hit on the nation's gross domestic product, according to a report from Bernama.

The Southeast Asian economy contracted for the fourth straight quarter in the first three months of the year, albeit at a slower pace. The government and the central bank expect the economy to grow 6% to 7.5% this year after a 5.6% contraction in 2020.

"Downside risks to the overall 2021 outlook are building despite stronger-than-expected 1Q GDP and oil prices holding up," Tamara Mast Henderson, Asean economist for Bloomberg Economics, wrote in a report Friday. "Herd immunity from vaccines appears unlikely until next year. Meanwhile, more infectious variants of COVID-19 have emerged, threatening to prolong outbreaks and lockdowns."

New cases in Malaysia neared 7,000 on Sunday, a fifth straight day that infections have remained above 6,000.

"We will see how long this crisis continues," Zafrul was quoted as saying. "If there is a need, then we will have to look at supporting (the economy) from a very targeted approach to the industries that are most affected by the pandemic."

Less than 3% of Malaysia's population have been fully vaccinated. That tally trails neighbors such as Indonesia and Singapore, and puts Malaysia at risk of falling well short of its inoculation goals for the year, according to data compiled by Bloomberg.

The government has said the pace would accelerate from June with more supplies coming in from Pfizer, Sinovac and AstraZeneca.

"Our procurement deal is to cover more than 100% of Malaysians; the question is when the supplies arrive," Muhyiddin said in the interview. "We have more than 600 centers and we should be able to vaccinate 150,000 a day, but we haven't reached there yet."

Muhyiddin said supplies of all booked vaccines will arrive by the year-end, helping the country achieve herd immunity or 80% vaccine coverage sooner than the 2022 target.

Meanwhile, intensive care unit beds for COVID-linked admissions are at 84%, Health Director-General Noor Hisham Abdullah said in a Facebook post Friday. The nation's healthcare system is under huge stress and people should adhere to virus protocols, he said.

"We have to stay safe and it's safest to stay home and follow the SOPs," Muhyiddin said. "We should all practice self-lockdown."