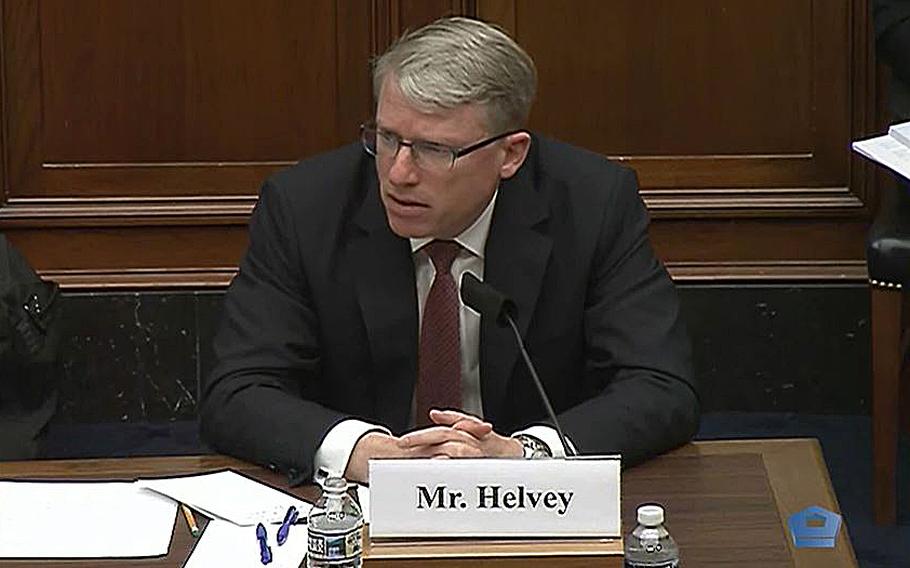 A video screen grab shows David Helvey, acting assistant secretary of defense for Indo-Pacific affairs as he testifies Wednesday, May 12, 2021, during a hearing on Capitol Hill in Washington. (Defense.gov)

WASHINGTON — Defense officials on Thursday remained confident the United States can fight terrorism in Afghanistan without troops on the ground in the country, yet some senators were skeptical that the Pentagon’s plan to conduct counterterrorism operations from bases outside the region will be effective.

David Helvey, acting assistant defense secretary for the Indo-Pacific region, and Brig. Gen. Matthew Trollinger, deputy director for political and military affairs on the Joint Staff, testified to the Senate Armed Services Committee that the Taliban’s ability to execute attacks against the U.S. from Afghanistan has diminished, and U.S. forces can fight terrorism there from a distance.

“I absolutely believe we can,” Trollinger told Sen. Mike Rounds, R-S.D., in response to a question on the U.S. ability to continually combat threats posed by the Taliban, al-Qaida and other terrorist organizations using an “over-the-horizon” operations strategy.

However, some senators, including Sen. Jim Inhofe of Oklahoma, the top Republican on the committee, expressed a lack of faith in the over-the-horizon operations — the details of which remain unclear — to defend against future attacks.

U.S. Central Command said in a statement this week that it has completed between 13-20% of the withdrawal from Afghanistan, and without any major Taliban attacks. The deadline for a complete withdrawal of U.S. troops is Sept. 11, a date that President Joe Biden set last month to coincide with the 20th anniversary of the 9/11 terrorist attacks that started America’s longest war.

Marine Gen. Frank McKenzie, the commander of CENTCOM, warned in testimony to the committee last month of the greater risks once the U.S. pulls out its troops. He also said shortly after his testimony that “the war on terror is probably not going to end.”

Invoking McKenzie’s comments, Inhofe said in his opening statement Thursday: “Over the horizon counterterrorism does not work.”

McKenzie told reporters from The Associated Press and ABC News as he traveled to the Middle East this week that he will make recommendations to Defense Secretary Lloyd Austin in early June on the specifics of how to monitor and fight terrorist groups from outside Afghanistan.

The commander also said this will be a “taxing time” for the Afghan military and “the risk is high.”

Helvey said later in the hearing that “discussions are ongoing” on finalizing plans to “provide the type of intelligence, surveillance and reconnaissance and other necessary elements to maintain an appropriate CT, or counterterrorism capability.”

Strengthening regional and local partnerships to drive terrorism out of the region is also key to ensure that Afghanistan does not become a safe haven for terrorists, Trollinger said.

Sen. Joni Ernst, R-Iowa, grilled the defense officials on U.S. adversaries’ ability to plan for and conduct attacks on America from bases in Afghanistan after troops have departed.

“I can say with confidence that the ability of international terrorist groups to plan, recruit, train, organize and execute attacks against the United States from Afghanistan has been significantly reduced,” Helvey said.

Ernst, an Army veteran, shot back: “Significantly reduced because we are there and we’re enabling efforts on the part of the Afghan National Defense and Security Forces, correct?”

“Our presence has had a significant impact on that,” Helvey replied. Ernst said while the threat against troops remains low now, she is still concerned terrorism will flourish once U.S. forces leave the country.

Sen. Joe Manchin, D-W.Va., also expressed fear that the withdrawal from Afghanistan will create “a power vacuum in which terrorist organizations can recruit, train and operate from.”

The senator asked what guarantees there are that the Taliban will not get its hands on U.S. military equipment that is left behind.

“I don’t think there are any guarantees,” Trollinger said.