‘Sense of duty’: As the military battles vaccine hesitancy, sailors at Great Lakes line up to get shots 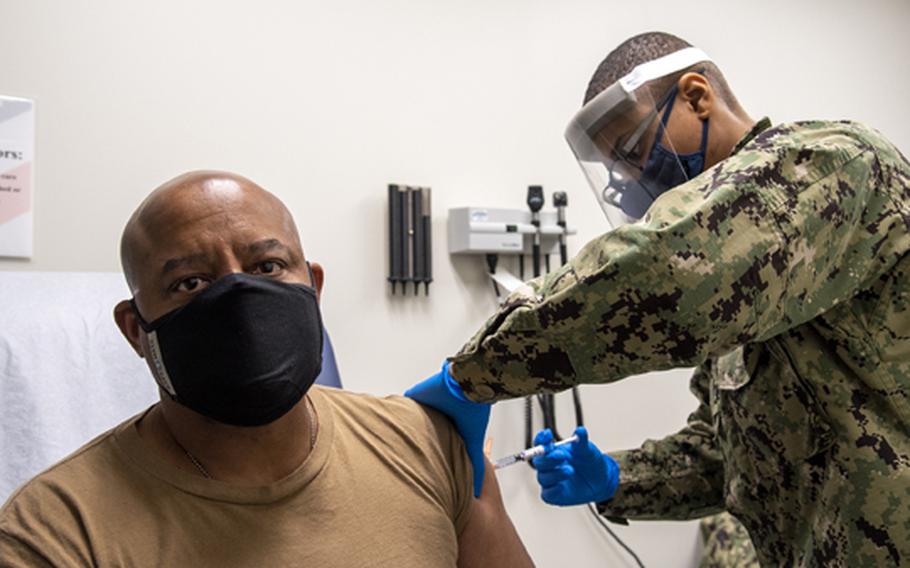 (Tribune News Service) — The sailor removed the green-and-brown camouflage shirt of his uniform and smiled a little as the needle quickly jabbed his left bicep at a COVID-19 vaccine clinic held recently at Naval Station Great Lakes.

It was Seaman Peter Muscott’s second dose of the Moderna vaccine, and the 19-year-old from Gratiot County, Michigan, said he was grateful to finally be fully vaccinated.

“Not everyone in the world gets this opportunity,” he said. “I feel I can be part of the solution, getting vaccinated.”

Muscott was one of hundreds of sailors getting immunized on a recent weekday at the roughly 1,600-acre naval station in Lake County, about 30 miles north of downtown Chicago. The vaccines were administered in a red brick building typically used for technical training, and the line of uniformed men and women awaiting their shots snaked outside and spilled out onto the manicured lawn of the naval station, with Lake Michigan in the backdrop.

Yet not everyone serving in the military has been so eager to get vaccinated. As the Defense Department tackles the arduous mission of getting shots in the arms of some 2.2 million troops across the globe, a major battle is vaccine hesitancy, with early indications that service members are turning down the shots in droves.

Roughly a third of military personnel were declining the vaccine as of February, according to congressional testimony by Defense Department officials. A December report from the nonprofit organization Blue Star Families found 40% of military personnel surveyed planned to get vaccinated against the coronavirus, while 49% said they were not and 11% were undecided.

Unlike other immunizations such as the annual flu shot, the military can’t legally mandate COVID-19 vaccines because they’re administered under an emergency use authorization. However, the Pentagon could require the COVID-19 vaccine once the U.S. Food & Drug Administration grants full approval.

But the policy has come under fire amid the pandemic, with some lawmakers recently urging President Joe Biden to issue a waiver requiring the COVID-19 vaccine for military personnel, calling unvaccinated troops “harmful to our national security.”

While the president has said he would not rule out mandatory vaccinations, he described the decision as a “tough call” that he would leave to the military for now.

So far, around half of the U.S. armed forces have taken at least one COVID-19 shot, with more than a million active duty personnel, reservists and National Guard either partially or fully vaccinated, according to the most recent Department of Defense statistics.

Of all service branches, the Navy has had the greatest percentage of personnel to take the vaccine, with more than half of all active-duty members and reservists partially or fully vaccinated.

But some military leaders fear service members — much like the rest of the nation — have hit a plateau of vaccine enthusiasm, as many of those most eager to get vaccinated have already done so.

At Great Lakes, about 65% of the 8,000 active-duty personnel, civilian staff and contractors have received at least one vaccine dose. This is predominantly Navy personnel, but also includes some members of the Air Force, Army and Marines who are also based there.

Those statistics, though, don’t include Navy recruits in boot camp and students who are training in technical skills at Great Lakes, a total of about 49,000 individuals over the course of the year who cycle in and out of the naval station.

Great Lakes has the Navy’s only boot camp in the nation, and its recruits — a generally younger, healthier and a less-prioritized population — just began getting vaccinated in late April. Since then, more than 2,000 recruits have received their first vaccine dose, and officials expect to administer another 700 or more doses this week. The naval station is also the Navy’s largest training installation; of the student population there, 1,200 personnel have received the first dose.

So far, more than 75% of recruits who have been offered the vaccine have taken it, according to the health care center. The naval station is continuing to offer weekly vaccine clinics for those interested in getting inoculated.

Capt. Tom Nelson is the deputy director and commanding officer at the Captain James A. Lovell Federal Health Care Center in North Chicago, which serves Veterans Affairs patients, active-duty military and their dependents. Nelson described the process of getting COVID-19 vaccines into the arms of all these different patients as a “herculean effort.”

While storing, administering and tracking the new vaccine have been challenging, he said sometimes the toughest and most critical part is often convincing people on the fence — military and civilian alike — to get the shot.

“One of the hardest things to do is to get people to want to get vaccinated,” he said. “While some people might look at not getting vaccinated as an individual right, I’ve tried to appeal to people’s sense of duty. I think we have an obligation to our fellow man to get vaccinated, our fellow men and women, to protect them.”

Preparing for their mission

She said she chose to get vaccinated against COVID-19 in part to prepare for this mission: The berthing area on a ship is a tight space, and she’ll be sleeping in Navy racks, shipboard bunk beds stacked several atop one another — close quarters with a higher risk for contracting and spreading a contagious virus.

Malinowski added that she was drawn to the Navy because she desired to travel and experience the world, and the COVID-19 vaccine will make it safer for her to do so.

“I want to explore new things, see some cool places,” she said, shortly after getting her second shot. “The vaccine will help with all of that.”

Since the pandemic began, the U.S. armed forces have had more than 190,000 COVID-19 cases, and 26 service members have died of the virus.

The Navy in particular has struggled with operations during the pandemic, most notably an outbreak in late March 2020 aboard the USS Theodore Roosevelt aircraft carrier that killed one sailor, infected about 1,200 others and led to the resignation of the Navy’s top leader.

Since then, the Navy introduced a slew of new protocols aimed at preventing outbreaks, from masking guidelines to social distancing onboard ships to restrictions of travel at ports.

Great Lakes has also had to change some of its operations, often in creative ways: In spring 2020, hundreds of new recruits were quarantined at a temporarily closed nearby indoor water park, Great Wolf Lodge in north suburban Gurnee; military officials noted that recruits had no access to “resort amenities.”

In August the Navy began quarantining new recruits at Fort McCoy, a western Wisconsin Army base, before shipping them to Great Lakes, though this practice ended last month.

Sailors say boot camp has also changed in many ways, from cleaning protocols to masking to distancing. Some lamented that traditional large-scale boot camp graduation ceremonies had to be suspended, and family members and friends could no longer be present for this major milestone. Instead, smaller ceremonies have been videotaped and posted on the Facebook page of the U.S. Navy Recruit Training Command.

On Mother’s Day, there was a special message on the social media site, reflecting the fears and anxieties moms of recruits have endured during the pandemic.

“Some of you had to have your hearts crushed when you received a call from (your) son or daughter stating they had to go into another quarantine or tested positive for COVID,” reads part of the post, which received more than a thousand likes. “As a mother, you feel helpless as you cannot be here for them.”

“It’s a hard journey to go through as my daughter is one of the ones that has to go back into quarantine,” one mom responded. “Mother’s Day this year is definitely very different and hard but we are proud of her for serving our country.”

Seaman Preston Woodrum said he decided to get vaccinated in anticipation of an upcoming trip home to the Columbus, Ohio, area, so he can safely visit his parents, grandparents and others who are at higher risk.

“It helps out everyone around us,” he said, just after getting his second dose.

“We have heard anecdotally that, and also through surveys, such as Blue Star Family surveys, that younger people may feel that they’re not as vulnerable to COVID and that perhaps the risk of getting vaccination is higher than getting the disease, which of course we know not to be true,” said Dr. Terry Adirim, acting assistant defense secretary for health affairs, at an April news briefing. “We’ve also heard that people want to allow those who may be more at risk to get vaccinated. So there’s all kinds of reasons ... and this is an area where I think we could focus and we could do a lot better in focusing on that population, to help them get educated because the message really is that you’re doing it not only to protect yourself but also your colleagues and teammates, your family and your community.”

Social media sites offer a glimpse at some of the fears of service members who are on the fence or plan to decline vaccination, despite the tested safety and effectiveness of all three vaccines available in the United States.

“I (don’t) want a rushed vaccine that could potentially be harmful to my long-term health,” one person posted on a Reddit site for Marines. “Simple as that (don’t) want or need to go much deeper into it than that.”

Another Reddit page titled “Why are soldiers so afraid of the COVID vaccine?” received more than 200 comments.

“They offered a couple to my unit and no one wanted it except me,” one person replied.

In mid-2000, a federal court ordered the Defense Department to suspend compulsory anthrax vaccinations, largely over questions as to whether the immunization was effective against the inhalation of anthrax as opposed to exposure through touching the contaminant. But after the FDA reaffirmed the safety and effectiveness of the vaccine against all forms of anthrax, the military eventually resumed its use in some cases, making it mandatory for personnel at high-risk but voluntary for most others.

Congress in 2003 passed a law requiring informed consent before military personnel receive vaccines under emergency use authorization. Under the National Defense Authorization Act, the president can waive informed consent in the interest of national security.

While the Defense Department can’t force service members to get immunized without that waiver, military leaders across the country have been combating vaccine myths and conspiracy theories with their own education campaigns.

Senior officers have been vaccinated publicly, to show they believe the shot works and is safe. Several Army bases have offered extra incentives for getting vaccinated, like additional days off or gym access, according to CNN.

The clip was posted on Facebook in January and has been viewed at least 5,000 times.

“Really, everybody should be getting this vaccine to cut out this coronavirus,” Lovell said in the video, as he got his shot. “Let’s get rid of this terrible virus that has taken over the entire country.”