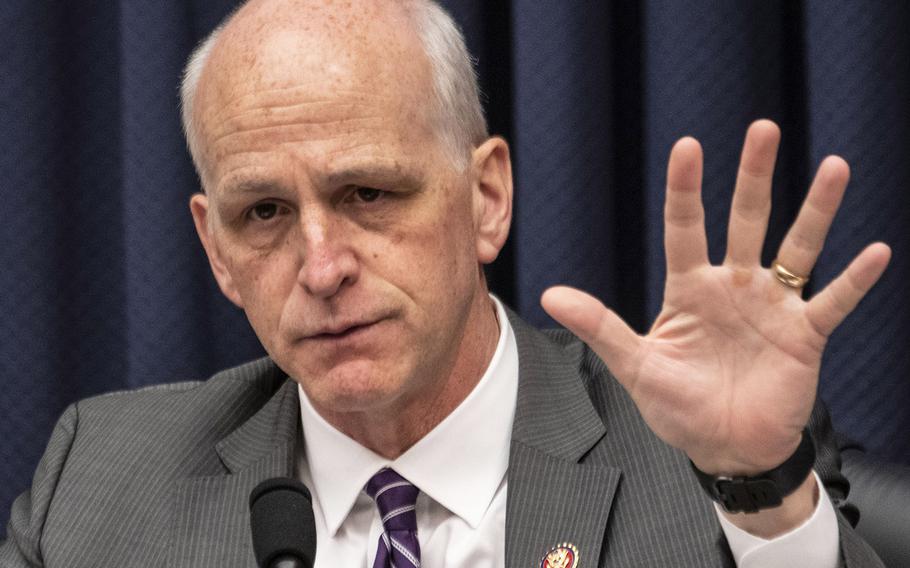 WASHINGTON — House lawmakers on Wednesday called for an immediate increase in the amount of special immigrant visas available for thousands of Afghan interpreters and translators who aided American forces and are now scrambling to escape their country in the midst of the U.S. drawdown.

But lawmakers also said they were uncertain whether they could take the needed action ahead of the annual defense bill that is typically used to boost the number of visas that can be issued.

During a hearing of the House Armed Services Committee, lawmakers grilled Defense Department officials David Helvey, acting assistant secretary of defense for Indo-Pacific affairs, and Brig. Gen. Matthew Trollinger, the Joint Staff’s deputy director for politico-military affairs, on how the Pentagon is working with the State Department and other agencies to help Afghans who are waiting for a visa that would offer safe passage to the United States.

“It doesn’t sound like we have a sufficient plan to protect” Afghans and their families, Rep. Adam Smith, D-Wash., said at the hearing on the military's plan to depart from Afghanistan.

The visa program has long been criticized for bureaucratic inefficiencies and problems with the application process that make it difficult for people to provide necessary documentation.

Yet lawmakers have stepped up calls for President Joe Biden’s administration to protect interpreters, as well as other contractors, since he announced a plan to pull out the remaining U.S. forces from Afghanistan by Sept. 11.

“The DOD needs to do some work. Whether it's temporary protective status, whether it's upping the visas. It has to be a higher priority in these next four or five months as we head to September,” said Smith, chairman of the House committee.

Military translators and other contractors can apply for the visa out of fear that insurgents could target them and their families for working with Americans since U.S. troops invaded Afghanistan in 2001 following the 9/11 terrorist attacks.

Smith said the Special Immigrant Visa program requires “mandatory spending” that is not normally set by annual appropriation legislation. Mandatory spending programs require that Congress must “cut something else” in order to fund the program, the congressman said.

“Every visa costs a certain amount of money, and every year we go searching for mandatory money. Mandatory money is not easy to find,” Smith said.

In the past few years, Congress has waived that requirement, something that the chairman said must be done again to push through the 18,000 pending visas that remain in the queue.

“If we're going to get [to that number], we are going to have to waive that requirement. We are not going to find the money to accommodate all the Special Immigrant Visas that are needed. I would bet on that,” Smith said.

Rep. Jason Crow, D-Colo., a former Army Ranger who served in Iraq and Afghanistan, asked Helvey to identify who the interagency lead is for the SIV program.

Helvey responded he believes the State Department would be the lead, though he is not certain.

“We are several weeks into this drawdown. We have no time left. … And, you don't know who the interagency lead is,” Crow said.

Helvey committed to advocate for an “interagency lead” for the SIV program, and he also said the establishment of an interagency task force to help speed up the process would be beneficial.

“We are working with the National Security Council to work through these issues, having interagency meetings multiple times a week to address this specific question,” he said.

“If it requires our committee to move with some type of enabling legislation, maybe ahead of NDAA, I think frankly, that's our responsibility,” he said.

Rep. Michael Waltz, R-Fla., a former Army Green Beret who served multiple deployments in Afghanistan, said one of the interpreters with whom he worked was executed along with members of his family for having documentation that he needed to get the visa.

“We need to evacuate them out,” he said.

Waltz asked Helvey what is preventing the Defense Department from evacuating interpreters, along with others, such as politicians and schoolteachers who “have stood with us.”

“We are continuing to work with our Afghan partners,” Helvey responded.

But Waltz pressed for a commitment from Helvey to make U.S. allies a priority.

“These people who have stood with us, are being hunted down as we speak. They are being executed. Their family's lives are on the line,” the congressman said.

Helvey said the Defense Department is working with other agencies to provide support to interpreters and translators, but he offered no clear answer on an evacuation plan.