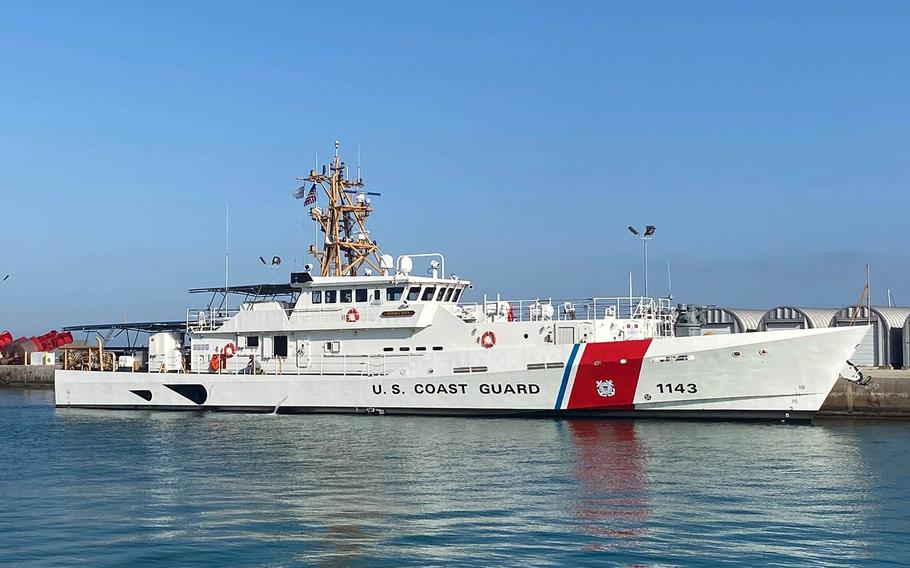 The 154-foot Sentinel-class cutter Frederick Hatch is expected to arrive at the U.S. island territory in early July, according to a Coast Guard statement provided to Stars and Stripes. It will join two similar cutters — Myrtle Hazard and Oliver Henry — that arrived there in the latter half of 2020.

The Frederick Hatch will make port calls along the way for maintenance, refueling and resupplying, the Coast Guard said.

The trio of fast-response cutters replace the service’s 110-foot patrol boats previously stationed on Guam and possess advanced technology in communications and surveillance systems, the Coast Guard said in a statement in February when it took delivery of the Frederick Hatch from the builder, Bollinger Shipyards.

The fast-response cutters are designed for missions beyond the traditional search-and-rescue work for which the Coast Guard is best known. They can reach speeds up to 28 knots, remain at sea for five days and cover over 2,500 nautical miles during that time, according to the Coast Guard.

Armed with four .50-caliber machine guns and a remote-controlled 25-mm cannon, the cutters can be used for drug interdiction, defense operations, maritime law enforcement, search and rescue and environmental protection.

The Coast Guard’s beefed-up fleet in the Pacific is aimed in part at countering China’s growing sea power.

In December, the Navy, Marine Corps and Coast Guard issued “Advantage at Sea,” a tri-service naval strategy responding to China’s “revisionist approach that aims at the heart of the United States’ maritime power.”

“Since the beginning of the 21st Century, our three services have watched with alarm the growing naval power of the People's Republic of China and the increasingly aggressive behavior of the Russian Federation,” the report said.

China’s strategy hinges on the use of a multipronged deployment of ships from its navy, coast guard and maritime militia “to subvert other nations’ sovereignty and enforce unlawful claims.”