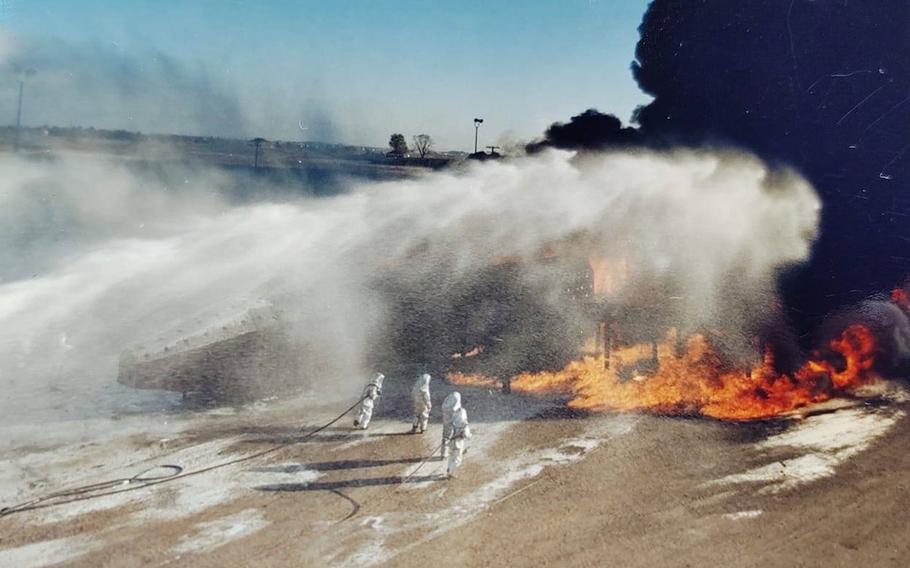 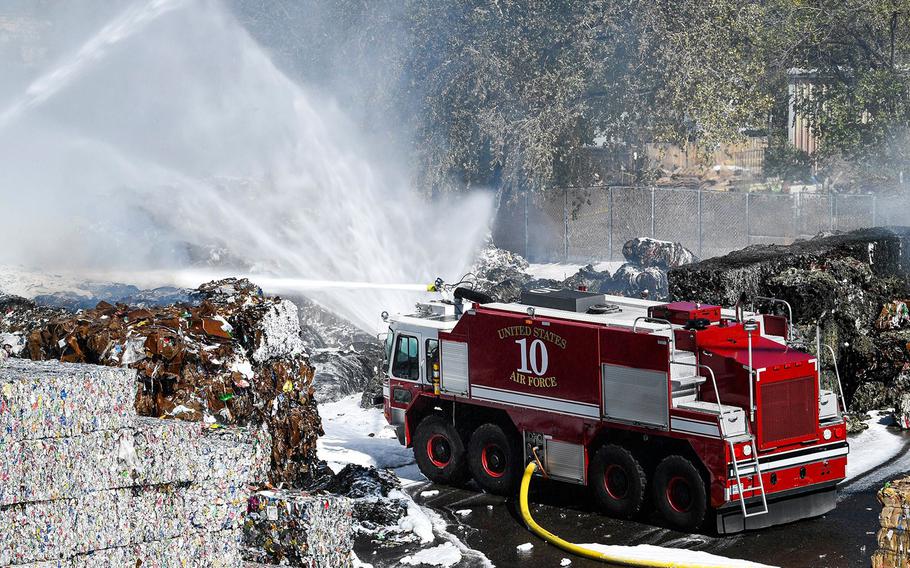 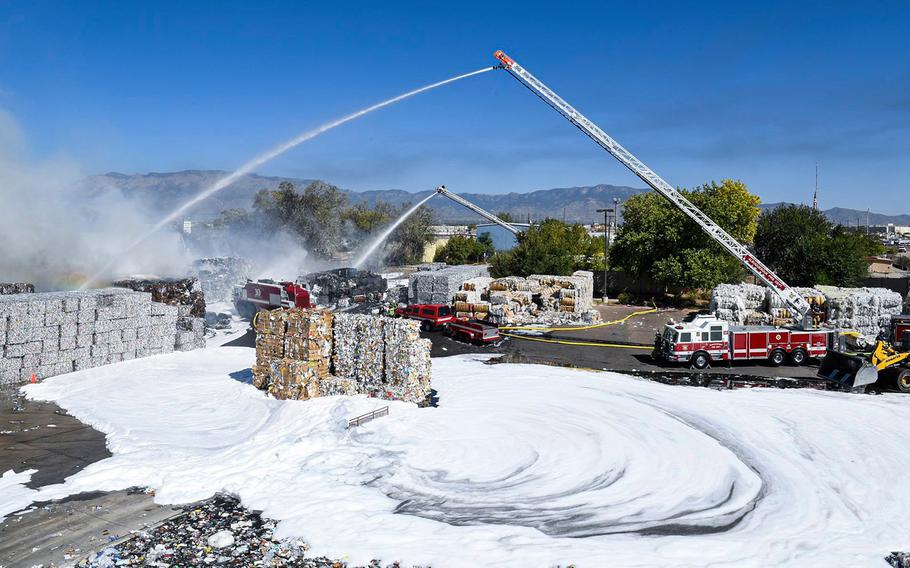 WASHINGTON — Neil Hogan and Jason Linta have something in common beyond their five years of service together as military firefighters at Eglin Air Force Base in the mid-1990s. Both men have been diagnosed with terminal cancer and are fighting for their lives.

Linta, medically retired after nearly 24 years in the military, was diagnosed in December 2017 with adenoid cystic carcinoma. The rare cancer has spread from his tear gland to other parts of his body.

Hogan medically retired after spending his entire career as a firefighter with the Defense Department. Now 48, he’s battling brain and prostate cancer.

Linta and Hogan are among many service members coping with health conditions that doctors believe are tied to years of exposure to highly toxic, cancer-causing chemicals found in firefighting foam.

“Some people say, ‘Oh, they’re firefighters. They know the risk.’ [But] we didn’t sign up to get cancer. We signed up to be firefighters,” Linta said in an interview Thursday.

Linta said he knows of six other firefighters who served at Eglin who have been diagnosed with cancer, and some have died.

“It’s time for [the government] to step up and take care of our firefighters and our veterans that have defended our nation,” he said.

This week, a House sub-panel met to address implications of exposure and cleanup efforts, and the message was clear: For too long “little to no action” has been taken by the government.

Decades of exposureService members use foam for a range of military activities and to extinguish aircraft fuel fires. For decades, that foam was described as safe, just like “soap and water,” veterans said in interviews this month.

The chemicals, per- and polyfluoroalkyl substances, are more commonly known as PFAS and are present in aqueous film forming foam, or AFFF. The chemicals have been dubbed “forever chemicals” because they do not readily break down and last for a long time in the environment and in the body.

The first Defense Department study that found firefighting foam used on military bases was toxic came out in the 1970s. But its use continued.

The military has argued that using AFFF was necessary because of its effectiveness to fight fuel fires. More than 40 years later, Congress demanded that the foam be replaced, after a growing body of scientific research revealed its lasting health risks.

A provision in the 2020 National Defense Authorization Act was the first sweeping effort from Congress to address the issue. The measure required the Defense Department to phase out the dangerous foam by Oct. 1, 2024.

Not enough actionA House Appropriations Committee sub-panel held a hearing this week with Defense and Veterans Affairs Department officials and experts to discuss the impacts of exposure to forever chemicals, the pace of cleanups on contaminated military sites and progress to remediate the issue.

Subcommittee Chairwoman Debbie Wasserman Schultz, D-Fla., said in her opening statement that for too long “little to no action” has been taken by the government. In 2016, the DOD began to clean-up the harmful chemicals “after decades of concern over exposure to PFAS,” she said.

“However, the department is still not doing enough, citing a lack of evidence. DoD has been slow to spend and execute hundreds of millions of congressionally appropriated cleanup funds,” Schultz said.

The role of the subcommittees, including military construction and veterans affairs, is to fund the cleanup of former military bases and provide oversight on how appropriated funds are spent.

DOD officials said at Wednesday’s hearing that they are continuing work started under the department’s PFAS task force. The Defense Department created the task force in July 2019 to deal with the chemicals found on military bases and in surrounding water sources.

The task force has three goals: mitigate and eliminate the current use of AFFF, fulfill cleanup responsibilities and understand the impact of PFAS on human health.

Paul Cramer, principal deputy assistant secretary of defense for sustainment, said at the hearing that the department has identified 108 closed bases as places where DOD might have used or released PFAS. The task force is conducting a PFAS assessment at these installations, to be completed by 2023.

DOD is also investigating PFAS use or potential release at over 650 DOD and National Guard installations, according to the task force’s 2020 progress report.

The task force has not yet released its annual progress report to Congress, but Cramer said that he’s committed to sending a report in 30 days.

That was called out at Thursday’s hearing.

“Two studies do not seem like a real commitment to getting to the bottom of this. Why aren’t you doing more?” Schultz said, noting that the department has the largest budget within the government.

Cramer said that the DOD is “limited in terms of medical research” and that they rely on other agencies like the Centers for Disease Control and Prevention to do the bulk of that work.

Kicking the canVeterans and advocates say the Defense and Veterans Affairs departments are not addressing the issue in an adequate way.

Service members and their families must be alerted of possible exposure to remedy the government’s historical failure to provide information on the toxins, they say.

Environmental activist Erin Brockovich said at the hearing that military members and their families who live on or near current and former military bases reach out to her about polluted sites.

“Many of them had tried connecting with local officials, but no one was willing to listen or to help.. ..They share with me how they or their family members were sick with kidney issues, testicular cancers, or dealing with fertility issues,” she said.

Brockovich said that officials continue to ignore pleas for help from people who are affected. The DOD has not provided answers about contamination and what to do about it, she said.

Veterans Affairs official Patricia Hastings testified Wednesday that the department is using social media to inform veterans, and putting articles about PFAS in its newsletters.

“We do have a very robust website that has [information about] many of the environmental exposures of concern for veterans,” Hastings said.

Kevin Ferrara, a retired military firefighter and advocate for the community, said that he believes the government is “kicking the can down the road.”

“Who are they sending [the newsletters] out to? Because, it’s not getting out to everybody that it needs to … we have to dig for this information to get access to it,” he said.

While the Defense Department conducts research and testing, troops are still being exposed to contaminated water and foam, and firefighting gear has been found to contain PFAS, Ferrara said.

“That’s what these firefighters are worried about. ... We just want to be told what to do, how to prevent [contamination]. Our doctors need to know how to treat this,” he said. The former Air Force firefighter had been set to testify in front of the subcommittee. It’s unclear why Ferrara was removed from the panel and a congressional staffer did not return a request for comment.

Ferrara wants Congress to continue funding to remediate contamination at former military installations, and to “endorse legislation offering blood tests for former military firefighters and work with the VA to establish AFFF and/or PFAS presumptives.”

A “presumptive” service connection means that the VA “presumes” that certain disabilities were caused by military service, which can help veterans get disability compensation. For now, exposure to this class of chemicals is not on that list.

Linta says that he battles with the VA “just to get the care that I need.” But he said that he plans to continue speaking up about the issue, for him and other veterans.

“I’m fighting for that 70-year-old that probably doesn’t have the means and energy that I do.”