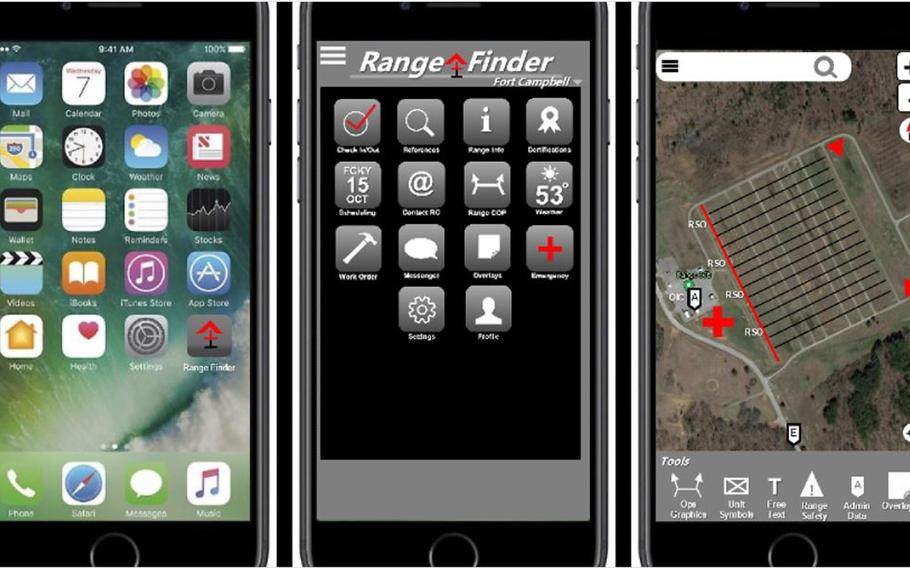 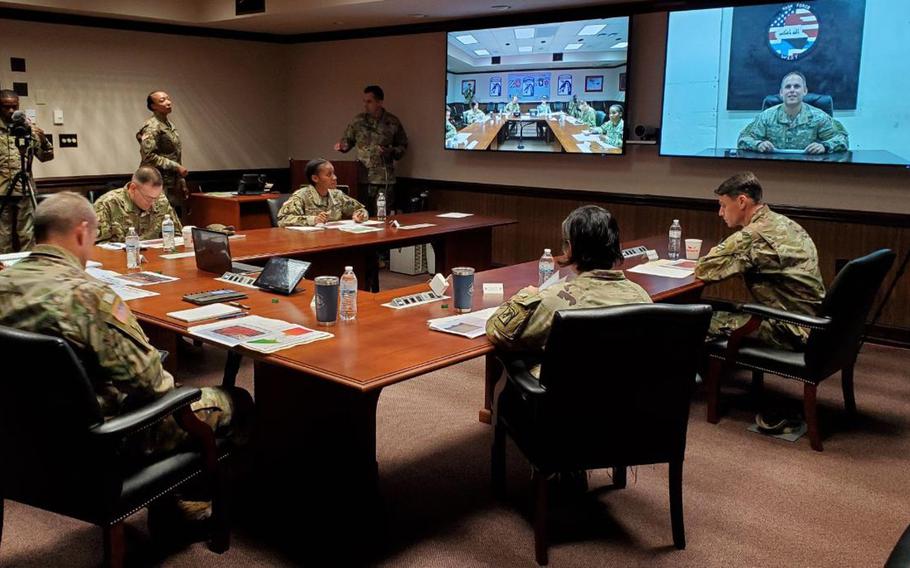 During the XVIII Airborne Corps' ''Dragon's Lair'' innovation challenge on Oct. 27, 2020, Capt. Michael Stevnik of the 82nd Airborne Division pitches an idea for adding the option to reserve training ranges for smaller blocks of time in the Army's range management system. (U.S. Army)

Winning the XVIII Airborne Corps’ first “Dragon Innovation Challenge” with an idea to improve training range management by using mobile apps earned Maj. Evan Adams his choice of any Army school. He opted for something sensible, if less action-packed.

The planning officer with the 101st Airborne Division was one of five finalists who presented problem-solving ideas via video teleconference to a panel of judges in a competition this week at Fort Bragg, N.C. All were focused on addressing headaches with training ranges.

Adams pitched a “RangeFinder” mobile application designed to help streamline the management and booking of weapons ranges, while improving communications and disseminating plans, policies and procedures. He likened it to a Gerber multitool, which would bring several functions into one pocket-sized package.

“We have all these tools, all these capabilities exist,” he told Stars and Stripes on Thursday. “It’s just, nobody’s combined them.”

For wowing six panelists with the idea Tuesday, he got a four-day liberty pass and could have also chosen to earn a shiny badge for his Army Greens by attending an elite military freefall parachute course in the Arizona desert or dive school off the coast of Florida.

“No, he wants to go to Capability Developers Course,” the corps said Wednesday on Twitter, joking that he might end up at austere survival, evasion, resistance and escape training instead.

It’s “kind of nerdy,” Adams said, but “nerds run the Army.” He said he chose that course because it would help him develop more good ideas at this point in his career.

“It would be pretty cool to have HALO wings, but at the same time, I’m a field-grade (officer) ... I’m old,” the 13-year Army veteran said, referring to the high-altitude, low-opening jump badge.

Besides, he’s already done Airborne and Ranger schools and is likely to do Air Assault and Pathfinder anyway, he said.

In addition to aiding range management, Adams said he was excited about the potential that the Army could develop user-friendly mobile apps to help with medical readiness or to replace the cumbersome Defense Travel System.

His idea beat out four other finalists that got the most votes out of the dozens of online submissions to the Dragon Innovation Challenge. The initiative, backed by the corps’ three-star commander Lt. Gen. Erik Kurilla, is aimed at spurring creative solutions from within the 3rd Infantry, 10th Mountain, 82nd Airborne and 101st Airborne divisions, as well as the 20th Engineer Brigade, 16th Military Police Brigade and 3rd Expeditionary Sustainment Command.

“Top-down leadership with bottom-up refinement,” said Master Sgt. Roy Smith, one of the panelists. “You don’t need a lot of rank on your chest to have a good idea.”

Filling out the field of finalists who entered the “Dragon’s Lair” to pitch their ideas this week were three soldiers from the 82nd Airborne Division — 1st Sgt. Daniel Murphy, Capt. Michael Stevnick, and 1st Sgt. Richard Greve — and 1st Lt. Nathan Wagner of the 10th Mountain Division.

From tweaks to an existing range management system to development of division-level marksmanship instructor training, all five proposals had some merit, said panelist Capt. Anne Blank. But Adams’ represented something “bigger” that encapsulated the spirit of the challenge.

Adams, who sees the idea as “inevitable” rather than revolutionary, highlighted several advantages to using smartphones to replace or enhance operations that mainly rely on landline phones, two-way radios, clunky websites and PowerPoint slides.

On Wednesday, the corps headquarters began working on how to implement Adams’ idea, said Col. Joe Buccino, the corps’ spokesman.

A second edition of the Dragon’s Lair is scheduled for Nov. 17.

“We know there are ideas out there and we want them in the Dragon’s Lair,” he said.