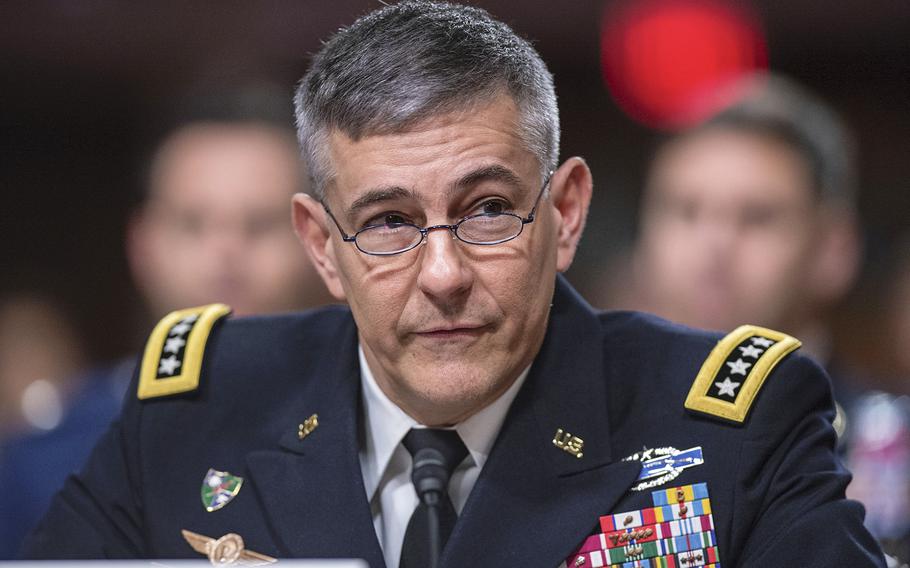 Gen. Stephen J. Townsend, commander of U.S. Africa Command (seen here at a Capitol Hill hearing in April, 2019) says he "isn't buying" that whoever shot down a U.S. drone over Libya last month, using a Russian air defense system, doesn't know where it is. Townsend said Monday, Dec. 9, 2019, the U.S. wants the drone back. (Carlos Bongioanni/Stars and Stripes)

STUTTGART, Germany — The U.S. wants back a drone that was shot down over Libya last month by a Russian air defense system believed to have been operated by mercenaries or militiamen, U.S. Africa Command said Monday.

“We believe the LNA or Russians didn’t know it was a U.S. remotely piloted aircraft when they fired on it,” AFRICOM’s Gen. Stephen J. Townsend said in a statement. “But they certainly know who it belongs to now and they are refusing to return it. They say they don’t know where it is but I am not buying it.”

The so-called Libyan National Army he was referring to is led by renegade “Field Marshal” Khalifa Hifter, who has been fighting the internationally recognized central government in Tripoli since 2011.

While it’s possible that the LNA manned the Russian system that shot down the drone, AFRICOM said it thinks foreign mercenaries, such as the private Russian military contractors who recently began collaborating with Hifter’s forces, were more likely responsible.

The downing of the drone underscores U.S. concerns about Russian involvement in Libya, which has been in a state of civil war ever since NATO’s 2011 bombing campaign helped to topple long-time dictator Muammar Gaddafi.

While numerous militia groups operate in Libya, Hifter’s army has emerged as the main threat to the U.S.-backed government of National Accord. In April, Hifter’s offensive on Tripoli forced the U.S. to pull a small cadre of troops out of Libya.

The U.S. continues to routinely conduct surveillance operations in Libya in coordination with the national government.

In September, a series of air strikes launched by AFRICOM killed more than 30 militants, at least 17 of whom were identified as Islamic State-aligned terrorists.

The U.S. has raised concerns that the ongoing conflict and overall disorder in Libya could enable terrorist groups such as ISIS to seek sanctuary in the North African country.

“U.S. Africa Command remains committed to monitoring terrorist activity in Libya for the betterment of Libya and the region,” Karns said.