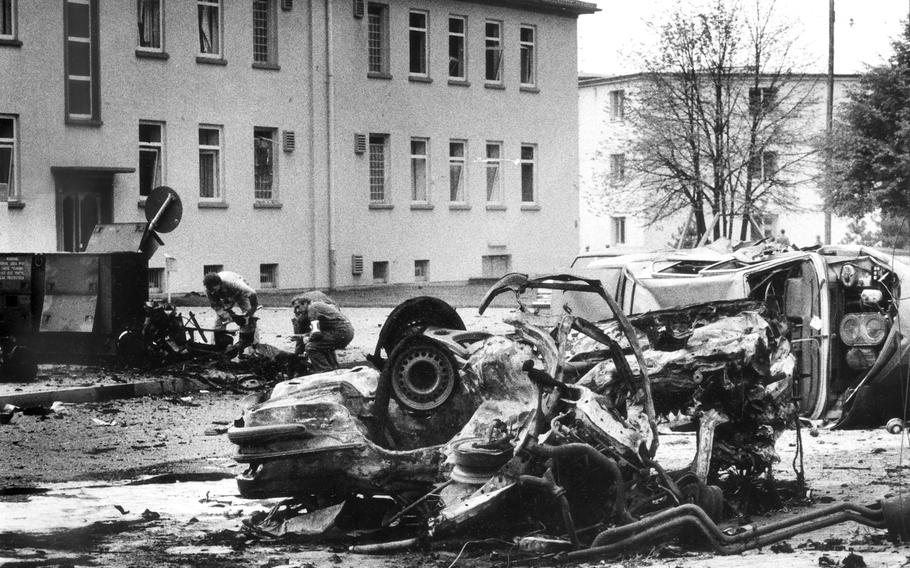 The carnage after a terrorist's bomb went off in front of the headquarters building at Rhein-Main Air Base, Germany on Aug. 8, 1985. Two Americans were killed in the blast. Spc. Edward Pimental had been murdered the night before for his identification card and the access to the base it provided. The documentary ''The Worst Thing'' is about Pimental's death. (Stars and Stripes file photo)

KAISERSLAUTERN, Germany — A soldier’s murder, a leftist militant group’s 1985 terrorist attack and a sister’s lingering questions are the focus of a documentary film being shown in Wiesbaden on Wednesday.

The film "The Worst Thing" follows several visits to Germany by Kathleen Pequeno, the sister of U.S. Army Spc. Edward F. Pimental who the Red Army Faction murdered in Wiesbaden. In it, she meets several former terrorists to discuss the attack and find out more about their motivation in killing innocents like her brother.

Filmmaker Desireena Almoradie captured the encounters and the sister’s search for answers. Almoradie will present her 84-minute documentary Wednesday evening at the Caligari movie theater.

Pimental was stationed at former Camp Pieri in Wiesbaden-Freudenberg. On Aug. 7, 1985, he went to a bar in the city center where he met Red Army Faction member Birgit Hogefeld, who lured him to a spot in the forest. There he was shot in the head.

The following day, the terrorists used his military ID card to drive a car full of explosives onto Rhein-Main Air Base in Frankfurt. The ensuing blast killed two more Americans, Airman 1st Class Frank. H. Scarton and Becky Jo Bristol, the civilian wife of another airman. Twenty-three others were injured.

A photo of Edward Pimental, an American soldier murdered by the Red Army Faction terrorist group to get his military identification card, that the documentary ''The Worst Thing,'' is about. ()

A subsequent investigation found that Hogefeld had targeted Pimental to get his ID card in order to gain access to the air base for the attack.

The Red Army Faction, also known as the Baader-Meinhof Gang, was responsible for a wave of terror attacks in Germany in the 1970s, 1980s and early 1990s in which 34 people died and hundreds were injured. It has been inactive since 1998.

Lt. Col. Paul A. Bloomquist died in a bomb blast in 1972 in Frankfurt, while Capt. Clyde R. Bonner, Spc. Ronald A. Woodward and. Spc. Charles L. Peck died at an attack at the U.S. Army Headquarter in Europe in Heidelberg.

The film’s website says that “in peeling the story’s many layers with patience and compassion, memories are retold, intentions are uncovered, and forgiveness and redemption are revealed in unexpected ways.”