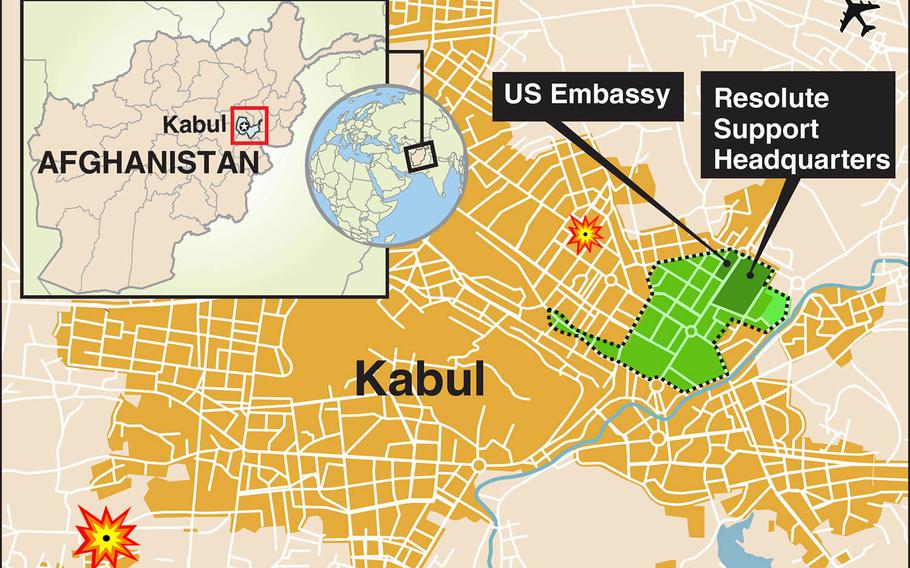 This map shows the approximate location of the of the attacks in Kabul on Wednesday. (BEV SCHILLING/STARS AND STRIPES)

This map shows the approximate location of the of the attacks in Kabul on Wednesday. (BEV SCHILLING/STARS AND STRIPES) 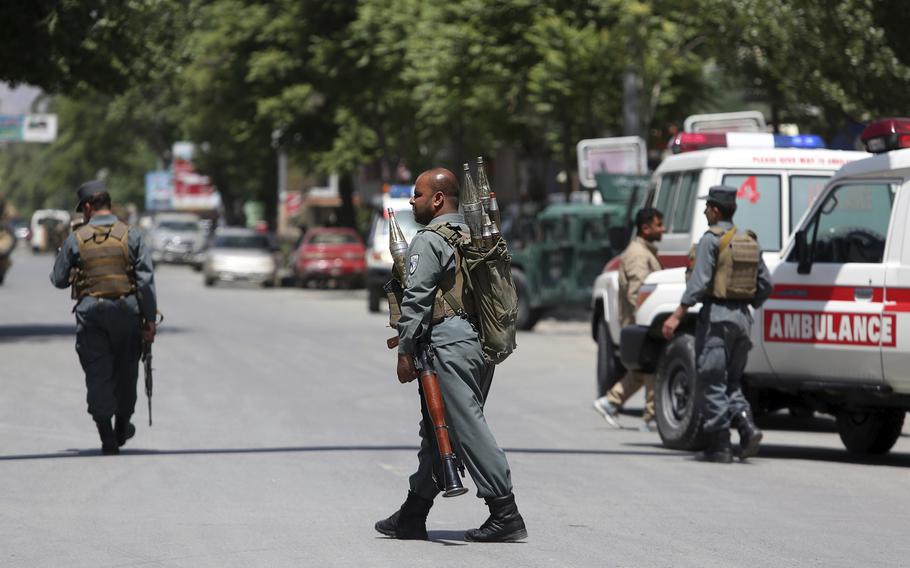 KABUL, Afghanistan — At least two police officers were killed and more than six people wounded in a series of blasts that rocked the capital Wednesday afternoon, including multiple bombings in a neighborhood near the international zone where the U.S. Embassy and NATO mission are located.

Both the Taliban and the Islamic State claimed credit for the attacks, which Afghan officials have attributed to the Haqqani network, a brutal wing of the Taliban.

The attacks occurred hours before a 6.2 magnitude earthquake along the northern border shook the country as far as Parwan province, where the largest U.S. airbase in Afghanistan is located in Bagram, and the capital. They came as Taliban insurgents have achieved further gains, overrunning two districts in separate northern provinces.

Officials said the blasts were part of complex attacks targeting two separate police stations. They appeared to be part of a rare coordinated attack in two different areas of the city.

The first attack in the western Dasht-e Barchi district of the Afghan capital, which is home to many members of the largely Shiite Hazara minority, began before noon. The Islamic State affiliate in Afghanistan, which has repeatedly targeted Shiites, later claimed responsibility for that attack. Polling places in the neighborhood have been attacked in recent weeks, killing dozens of people.

Kabul police spokesman Hashmat Stanikzai said there was a blast at the gate of the police station in that district. Police then killed two bombers who tried to enter the compound, ending the attack. Two police officers were killed and two wounded, Stanikzai said.

At least six wounded had been transported to area hospitals, The Associated Press reported.

Interior Minister Wais Ahmad Barmak blamed the attack on a lack of much-needed intelligence equipment. In a televised news conference in the late afternoon, he said the incident would be investigated.

Shortly after the first attack, there were several more blasts — also followed by gunfire — near the police station in the Shahr-e Now neighborhood, a busy commercial district near the U.S. Embassy. The area also contains several fortified compounds occupied by international aid groups and Afghan government agencies. Barmak said five gunmen carried out the assault, which lasted several hours.

An Asian Development Bank compound and the office of a telecommunications company are located near the police station.

More than a dozen blasts were heard in the area, with sporadic gunfire continuing throughout the afternoon. Interior Ministry spokesman Najib Danish said at least two suicide bombers targeted the station.

The New York Times reported that attackers had tried to enter the Asian Development Bank but were repulsed by guards. They then continued their assault after climbing a nearby building that was under construction.

Some reports claimed that guards at a travel agency that processes visas applications for India were killed in the attack. India is a rival of Pakistan, who Afghan and U.S. officials have long accused of supporting the Taliban.

In the late afternoon, the area remained cordoned off, but the shooting had subsided, Stanikzai said. He said he could not provide details about casualties at that site.

A blast was heard later, around 5:30 p.m., shortly after the Taliban took credit for the attack, claiming to have killed several police officials. Some reports claim ISIS also claimed responsibility for the attack.

A nearby hospital had received casualties, an official said earlier in the day, but he could not provide more details.

An eyewitness said he saw the bodies of two dead police officers and a dead security guard.

The capital, once a relative safe haven in the restive country, has become one of the deadliest. The Western-backed government and its security forces are a frequent target of Taliban and Islamic State violence, but several recent attacks have targeted voter registration centers and other civilian locations.

Earlier this week, a suicide bomber on foot blew himself up in Shahr-e Naw Park, near the site of Wednesday’s second attack, after police stopped him on his way to attack a blood drive for victims of a twin bombing last week in the Afghan capital.

Dual bombings on April 30, claimed by the Islamic State affiliate in the region, killed more than two dozen people, including nine journalists who had rushed to the scene of the first attack. It was the deadliest assault on reporters since the fall of the Taliban in 2001.

Elsewhere in Afghanistan on Wednesday, Taliban fighters reportedly captured the second district compound in two days when they overran the Bilchirgh district center in northern Faryab province forcing dozens of government troops to retreat, the AP said. But police spokesman Abdul Karim Yuresh told the AP that the compound was still in government hands and fighting was continuing.

A day earlier, the Taliban had captured a district compound in northern Baghlan province’s Tala Wa Barfak district, which lies on a main highway linking Bamyan province to the rest of the country.

Stars and Stripes reporters J.P. Lawrence and Phillip Wellman contributed to this report.