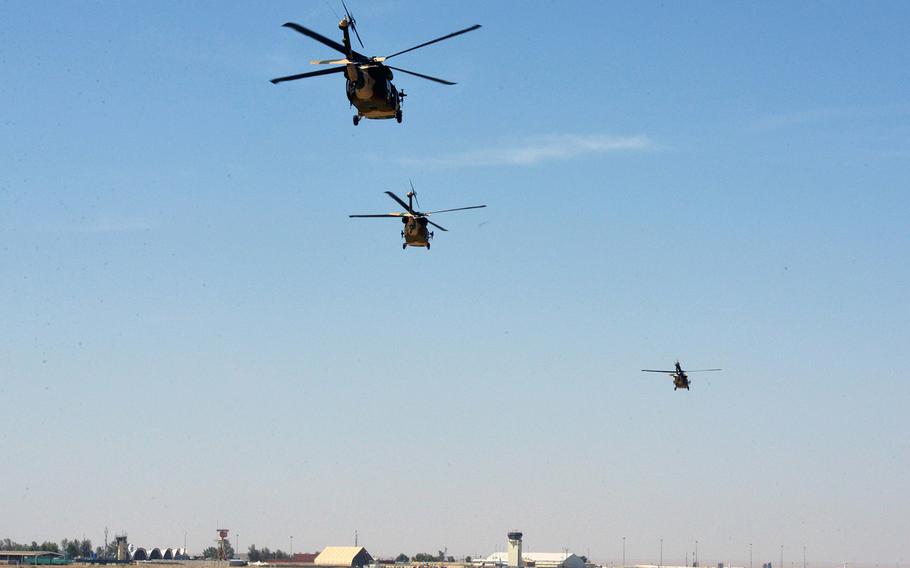 Three UH-60 Black Hawks take off to conduct the first Afghan-led operational mission on this aircraft May 8, 2018, Kandahar Air Field, Afghanistan. The mission, which was in support of the elections, occurred just one day after the crews graduated from Mission Qualification Training. (Erin Recanzone/U.S. Air Force)

Three UH-60 Black Hawks take off to conduct the first Afghan-led operational mission on this aircraft May 8, 2018, Kandahar Air Field, Afghanistan. The mission, which was in support of the elections, occurred just one day after the crews graduated from Mission Qualification Training. (Erin Recanzone/U.S. Air Force) 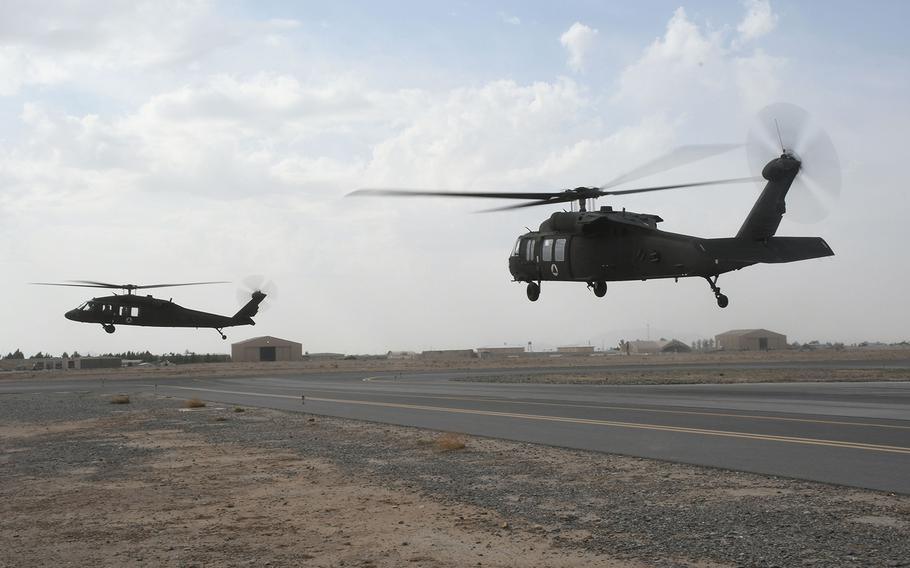 Buy Photo
Afghan pilots learning to operate the UH-60 Black Hawk fly in the aircraft for the first time with U.S. contractors at Kandahar Air Field in March. Three UH-60s conducted the first Afghan-led operational mission on this aircraft May 8, 2018. (Phillip Walter Wellman/Stars and Stripes)

The mission on Tuesday involved three choppers flown by Afghan air crews from Kandahar Air Field, as they conducted reconnaissance of voter registration centers in Helmand province. It happened a day after 15 pilots and 16 special mission operators were deemed qualified on Black Hawks.

“Not only are these aircraft and students the physical embodiment of progress, but they also represent a generational shift from the older Soviet-trained forces to the younger and more progressive Western-trained and educated fleet,” said Brig. Gen. Phillip Stewart, head of Train, Advise and Assist Command-Air.

The nation will need crews for a planned 159 Black Hawks to be added to the air force and the special mission wing by 2021.

The Pentagon predicts Afghanistan’s battle-worn Mi-17 fleet will become unsustainable by the middle of next year, largely because of a lack of parts and aging airframes. As of December, the AAF had 45 Mi-17s. This does not include about 30 Mi-17s frequently used by special operations forces.

The U.S. first introduced Mi-17s to Afghans to speed development of their air force. Sanctions against Russia after that country’s intervention in Ukraine meant Afghans could not get spare parts to keep their Mi-17s flying.

When it was first announced, the switch to Black Hawks sparked some grumbling among Afghan pilots who said the Russian helicopters are simpler to maintain and have better “hot-and-high” performance — meaning they can carry more cargo, more troops and operate at higher altitudes — a key consideration in a mountainous country like Afghanistan.

In response, Afghan Air Force commander Maj. Gen. Mohammad Shoaib said in a statement that Black Hawks are ideal for Afghanistan because they are suitable for the terrain and weather.

Recruiting Afghans with the required English-language skills to operate the Black Hawks remains a challenge, the Pentagon has stated. Security concerns have led to cancellation of multiple classes at the Afghan Air University.

UH-60 training lasts 16 weeks and includes instruction at Fort Rucker, Ala., the Czech Republic and the United Arab Emirates. The Air Force expects more than 30 crews will be qualified by next spring.