From the S&S archives: Vietnam crown of Miss America's reign 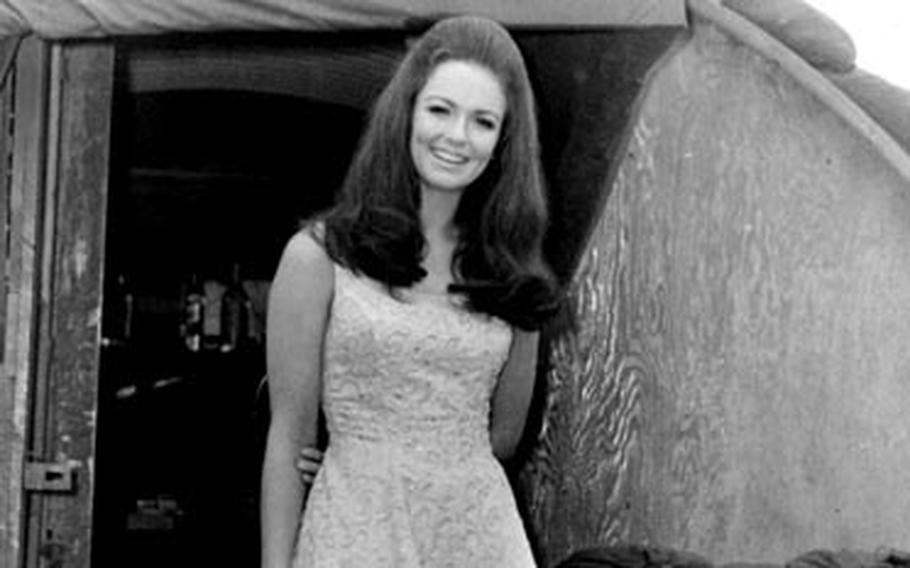 So says Miss America 1971 — Phyllis George — who called her trip to Vietnam the highlight of her reign.

But, Miss George — who turns in her crown and title in less than two weeks — expressed the hope that no future Miss America would have to visit Vietnam.

"I hope this is the last USO tour that has to come here," she said. "I hope they bring our guys home — I guess most people do."

Miss George and six state beauty pageant winners spent most of August visiting U.S. troops in Vietnam. The girls were scheduled to leave in early September.

"This has been an outstanding way to end a year," Miss George said. "The guys here have made it rewarding for us."

The 22-year-old brown-eyed brunette said this was the first time she had entertained in a combat zone.

"The best part was before and after the shows when we could rap with the guys and sign autographs," she said.

Miss George said she got a good impression of American servicemen here.

“Prom what the stateside newspapers say you think these guys are all shammers, loafers, juicers and heads — that they won’t do as they’re told. But that’s not true.

“The guys here aren’t bummers or losers. They remind me of friends at home. I met 10 or 12 people I know personally. The war hasn’t changed them.

“Some guys are bored — flat bored,” she added. “And that’s where you get the juicers and heads. They’re tired; they don’t have anything to do in a strange land.”

“Some of the men told me they didn’t know why they are over here and wanted to go home,” she said.

"Before I came to Vietnam I wondered what we had accomplished here but now that I see how poor the South Vietnamese people are, I understand why we stayed."

Miss George said the girls received the warmest reception of the tour at Phu Cat AB.

“The show lasted 15 minutes longer because of the applause. And on Fire Bases — although you don’t get as large crowds — the reaction was equally enthusiastic.”

The tour was tightly scheduled with 23 shows and a multitude of stops packed into three weeks.

But she added, “Though it may sound corny, seeing the guys’ faces light up gives us the needed energy. They are the people who keep us going.”

Being Miss America has been a tremendous learning experience, she said.

“I discovered a lot about myself, about qualities I didn’t know I had, such as self-discipline and humility. I particularly need the latter. When people meet Miss America it’s important to make them understand I’m just another human being.

“If I go out and say ‘I’m Phyllis George, Miss Anything-but-Miss America,’ people react normally,” she said. “But the minute I reveal I’m Miss America I become a figure a television screen, a character in a Cinderella story. They become scared to say hello.”

“It’s up to me to penetrate this aura,” she continued

Remarks made by the "man in the street" frequently are humorous.

“They’ll say ‘I voted for you’ or they’ll praise my singing in the pageant when I played the piano,” she said. “I should write a book about the things people have said to me.”

Miss George did not give up all the trappings that go with the position, however.

“People are going to treat me well because of the title, so why not enjoy it while I can? After Sept. 11, I’ll be a has-been.”

On that date Miss George will make way for her 1972 successor at the annual Miss America Pageant in Atlantic City, N.J.

Neither the Miss America contest nor any type of beauty competition is a bed of roses, she said.

“You just don’t pick up your evening gown and go to a pageant,” she said. “It takes a lot of hard work.

"A lot of tension, excitement and pressure is involved. We rehearse from 8 a.m. to 4 p.m. each day and compete that night. It is hard on a person — physically and emotionally.

She compared the Miss America Pageant to the Miss Universe and Miss USA competitions.

“They’re ‘brand x,’“ she laughed, adding that the Miss America contest is the only one of the three in which talent as well as beauty is judged.

"There are a lot of beautiful women in the world, but having a talent makes one an individual."

Talent counts 50 per cent in the Miss America event.

“I did it for interest and curiosity,” she said, explaining her devotion to the fine arts. “Also I had to be involved. That’s the fun of school.”

She will be a senior at North Texas State University at Denton — her home town — next fall. Her majors are speech and elementary education.

“It seemed like a good thing to me,” she said of her academic program. “I’ll have a degree even if I don’t want to work right away. After getting married I plan to teach school.”

Commenting on the "split" between young and old Americans, she predicted that there always would be a generation gap because of the constant changes in society.

"My generation wants to be heard — not only by their parents but by professors and political people as well," she said. "We want to show that we are responsible individuals.

"Our generation probably is one of the most educated, poised and sophisticated in U.S. history," she continued.

"They are outspoken, they are frank and they hate hypocrisy. They realize that injustices exist in our society, but mature individuals are working to strengthen our government peacefully without violence.

"I immediately lose respect for people who throw things and curse."

She was skeptical of 18-year-olds having the right to vote.

“When I was 18 I couldn’t have done it,” she said. “That was a transitional time for me — between high school and college — and my mind was not on national and international events.”

But she said, “I think kids are more mature today than they were when I was 18. I only hope that now that they have this responsibility they won’t take it lightly.”

Miss George said she had no objection to long hair on men as long as it is clean.

“I don’t like it touching the shoulders either,” she said. “But in general there is nothing wrong with fads. It’s part of the fun of living.”

Miss George said the three most pressing problems facing America today are civil rights, drugs and poverty. Deploring the use of drugs, she said she did not need chemicals to enjoy life.

“Turning to drugs only shows weakness in a person. if they care enough about themselves I can’t see how they could resort to this stuff.”

Miss George said she didn’t have much use for the women’s liberation movement since “I’m as liberated as any woman.”

“Nobody told me to enter a beauty pageant. Nobody told me what to study in school. No one will dictate to me — and that includes my future husband. He doesn’t know it yet, but that’s the way it will be.”