From the S&S archives: Clay shows talent as verbal shortstop 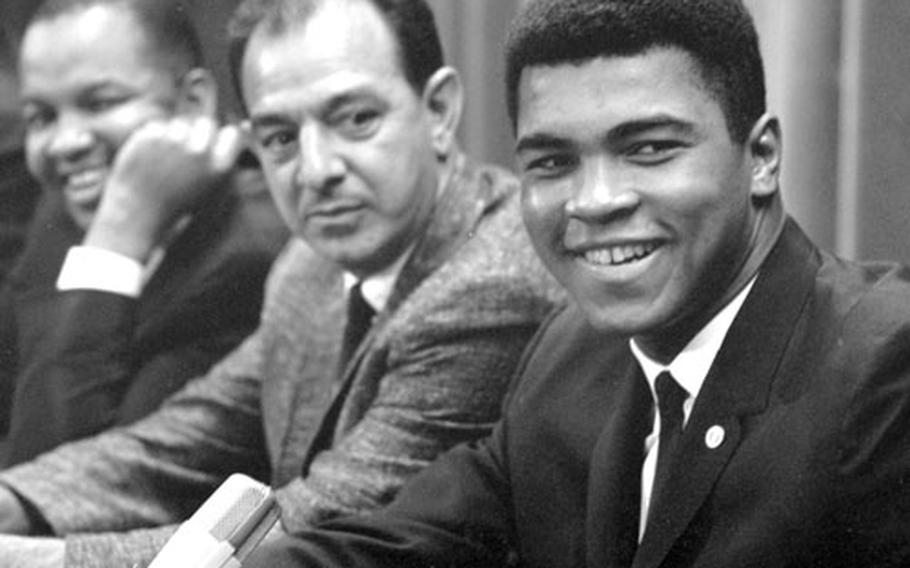 FRANKFURT, Germany — Muhammad Ali, born Cassius Clay, has the convictions of a zealot, the physical grace of a dancer, and the dexterity of a verbal shortstop when it comes to fielding questions from the press.

This latter gift was much in evidence Wednesday at the Intercontinental Hote1, where he spent 45 minutes fending off and responding to a variety of queries about his fighting, draft status and religious position.

Calm, cool and collected at the front table which was covered by a green table cloth approximately the color of money, Clay acquitted himself with a mental agility that may have surprised some.

The Intercontinental, wherein a variety of beautiful people lounge and linger, was the setting for the young man of modest background in Louisville, Ky., and he held sway in the hotel’s plush theater. 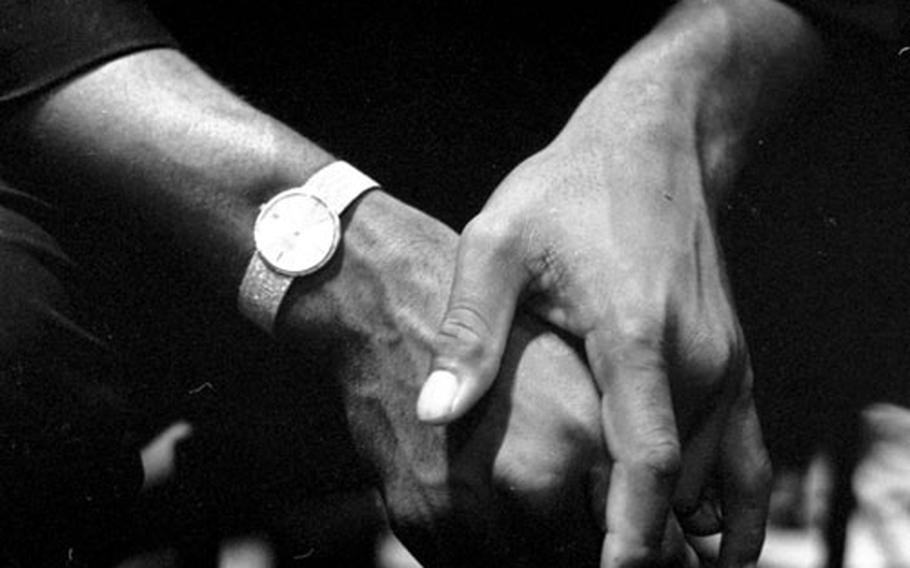 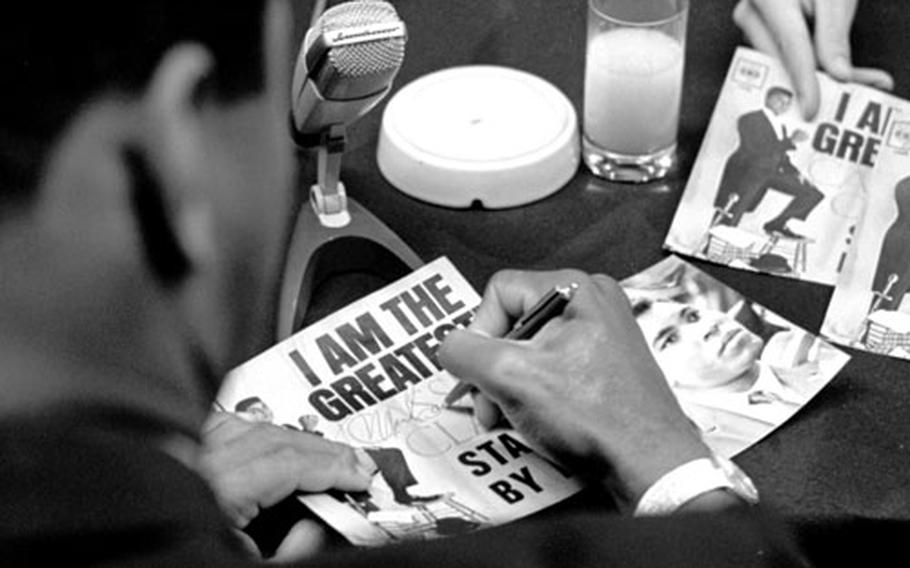 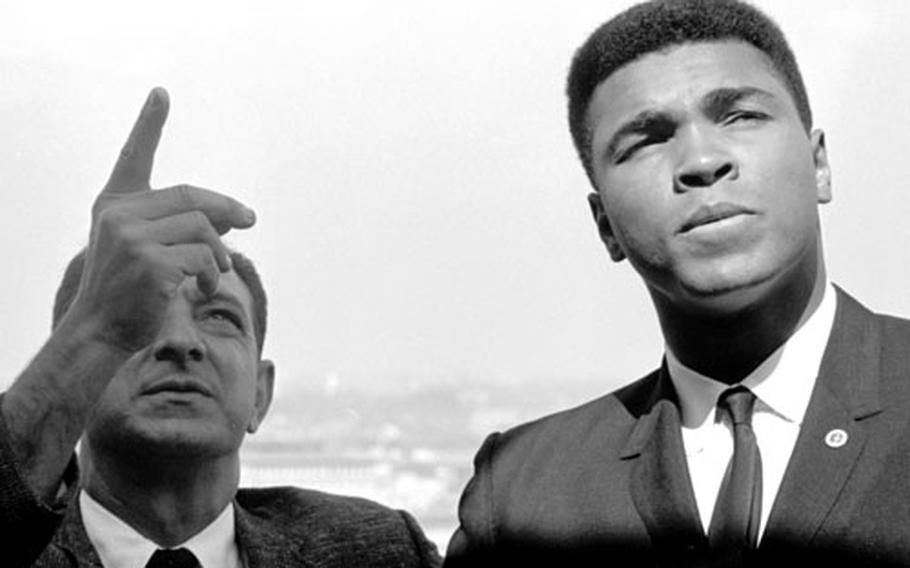 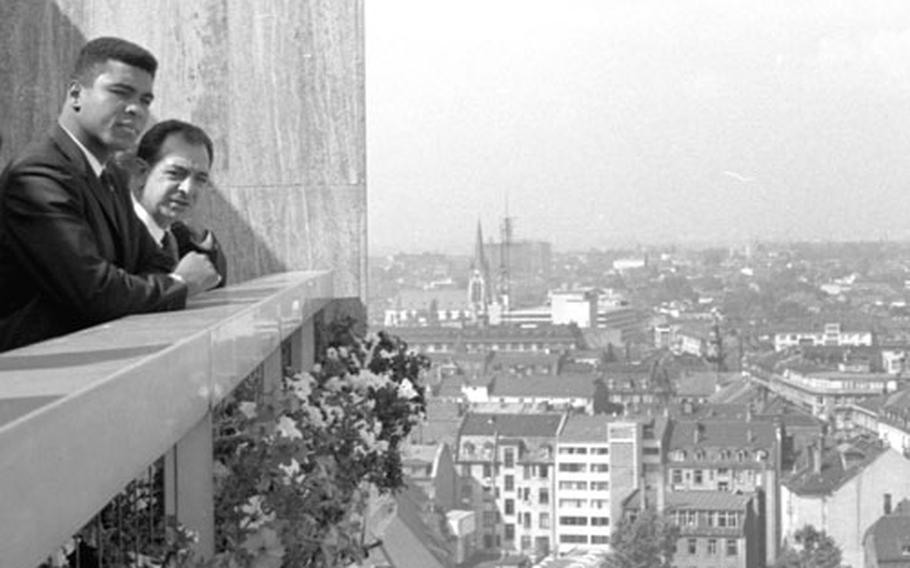 He was there by the grace of two quick feet and a pair of lethally blessed hands which have catapulted him to the crest of the boxing world — and into the limelight of controversy.

The hands might have belonged to a minister making a point from the pulpit and he moved them easily while handling such questions as these:

“Muhammad (it was always Muhammad, or Champ, or All, never Cassius or Clay), you’ve fought two bouts in England, and now this one in Germany. Do you feel more at home in Europe?

“No,” Clay quickly answered, “I’m at home in America.” Or, “May I ask are you physically afraid of anybody?” “Allah,” Clay shot back without hesitation.

“I deliberately said, ‘physically,’“ the reporter said. “Are you afraid physically of any man?”

"Allah," Cassius repeated and a voice from somewhere in the auditorium interposed, "Allah is a man."

Another questioner asked, "What special preparations are you making for the fight with Karl Mildenberger?"

Said Clay: “I’m hitting the heavy bag, working to hit harder.” Pausing, he added, “And I’m going to chop wood, cut down some of your trees here in Germany.”

"For firewood or matches?" someone asked.

On Mildenberger’s chances in their Sept. 10 heavyweight title fight at Frankfurt’s stadium, Clay said, “His chances are as good as any man on earth.”

And, on the possibilities of losing: “If I lose, I’ll retire. And, what I’m really going to do when I retire is to become a fulltime Muslim minister.”

The chaos which had prevailed at Frankfurt Airport on Tuesday when Clay jetted into town was mercifully absent during Wednesday’s session, and the trim champion seemed in much better form as he coped with questions ranging from hostile to sensible to nonsensical.

When asked if he expected to be drafted by the Army, Clay answered, “That’s up to my draft board, government officials, those kinds of people, and my lawyers.”

Along the same lines, he was asked if he thought many GI’s would come out to see him fight. “I hope so,” Clay responded.

Clay became a trifle sarcastic when reminded of Mildenberger’s earlier statements that he, Mildenberger, wasn’t overly impressed by the champion’s showing in the Brian London fight, won by Clay on a third-round knockout.

Continuing on with Mildenberger’s statement in his sights, Clay said, “He don’t have to worry about talking too much, just be ready for the fight, because I always am.”

While talking about his retirement, Clay indicated he is fighting now mainly because of financial obligations; “debts now, and obligations to those who’ve invested millions in me.”

Clay, who was calm and impassive throughout much of the questioning, livened up considerably when one reporter referred to a magazine article in which Ali had alluded to a "bum of the month" club.

“I wouldn’t call anybody I’ve fought a bum,” said Clay. “About that article, we were joking at the time. What I said was, if I run out of contenders, I might have to start a ‘bum of the month’ club like Joe Louis had.”

Suddenly directing his attention at his questioner, Clay said, “Would you call Mildenberger a bum? He’s proven he can whip any man in Europe. He’s European champion, isn’t he? You’ve got a lot of men in Europe. If he’s a bum, what does that make the average man walking the streets in Europe?”

Pivoting around to his companions at the front table, Clay smiled broadly and pointed at the man who had asked the question. "Look," Clay exulted "He calls Mildenberger a bum!"