What finished the bridge at Remagen? 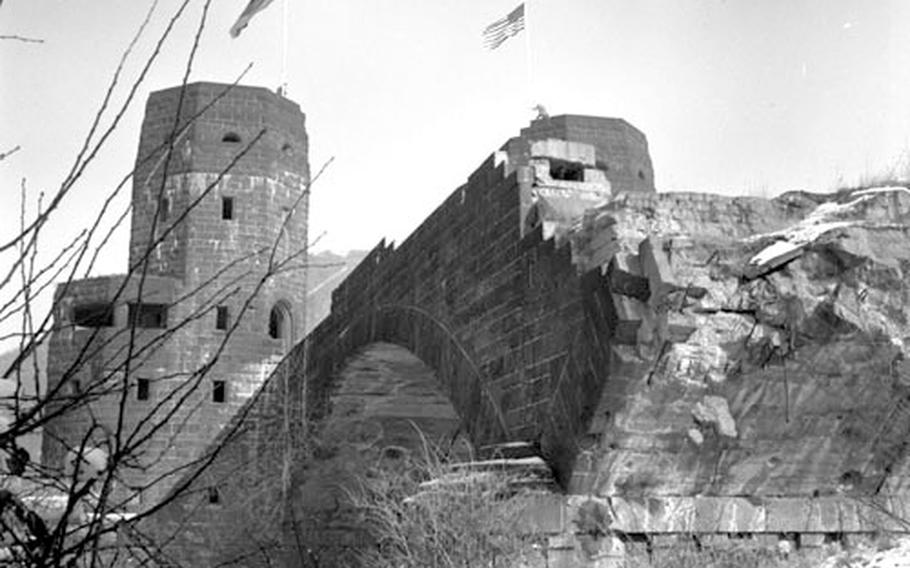 The ruins of the Ludendorff Bridge in March, 1962. (Norm Zeisloft/Stars and Stripes)

AFTER a reunion last week of the combat soldiers who were there on both sides of the lines, the question of why the Germans failed to blow the famed Ludendorff bridge still remains unsettled.

But the reunion at Remagen, Germany, did give an answer as to why the rail span eventually collapsed — 17 years ago today. It fell because of overuse, not because of attacks by the Luftwaffe, as the late Hermann Goering was so fond of claiming.

The ruins of the Ludendorff Bridge in March, 1962. (Norm Zeisloft/Stars and Stripes) 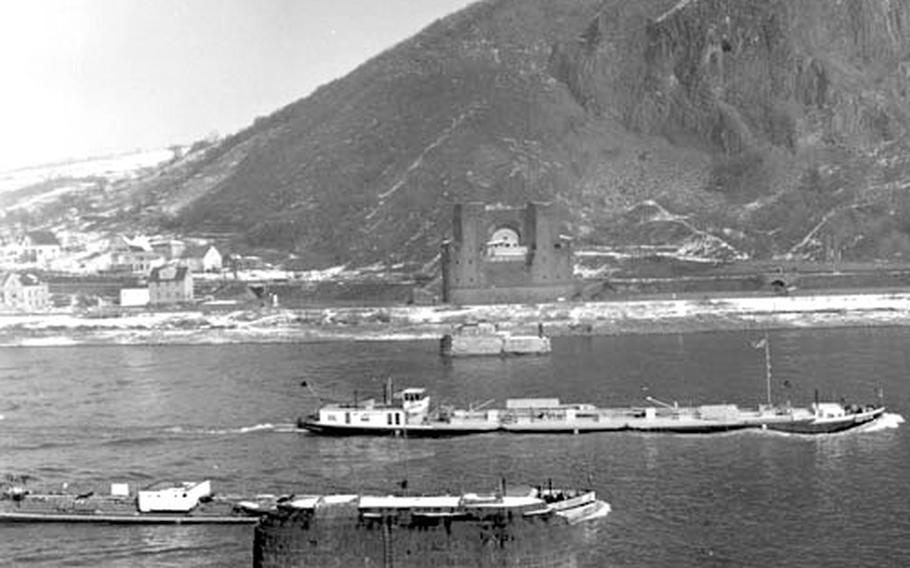 Ships on the Rhine pass the ruins of the bridge at Remagen. (Norm Zeisloft/Stars and Stripes) 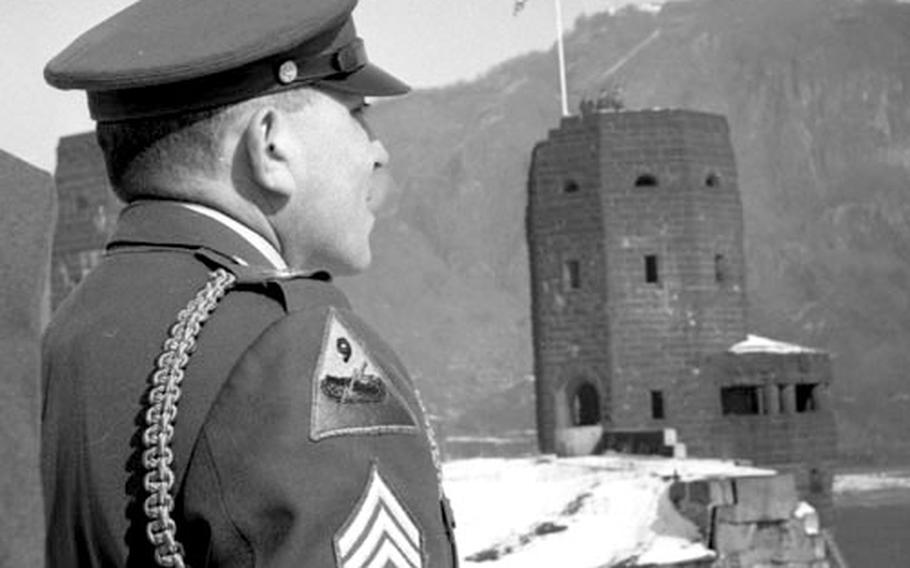 Sfc. Joseph A. De Lisio in front of the Ludendorff Bridge in 1962. (Norm Zeisloft/Stars and Stripes) 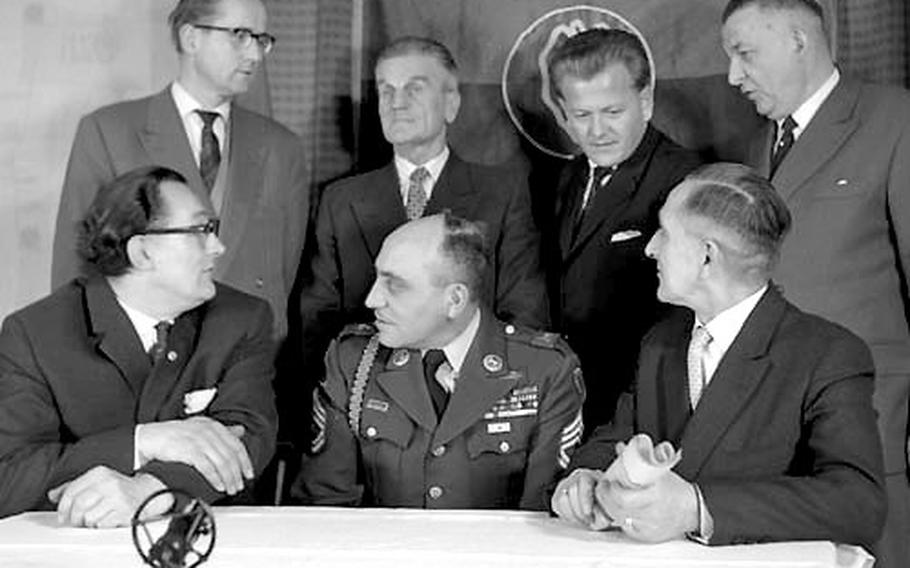 Men who fought on opposite sides during the battle at Remagen gather on friendly terms in 1962. (Norm Zeisloft/Stars and Stripes)

To recapitulate the combat situation on March 7, 1945:

Allied units were rushing to the Rhine. They were not to cross it that day, but to poise themselves for a later grand assault.

But a surprise package came their way.

A unit of American armored infantry seized the bridge at Remagen. Plans were changed, and three divisions poured over the Rhine in the biggest military triumph since D-Day.

The big question: Why didn't the Germans blow the bridge?

Hitler was so enraged he had four allegedly responsible officers court-martialed and sentenced to die. But only three were killed.

The fourth, an army captain in charge of bridge security, was tried and sentenced in absentia. He had been captured by the Americans. He now is a schoolteacher in Germany.

HIS name is Willi Bratge, 58, and he was among those present at the March 7 reunion this year at Remagen.

His comments and those of the others at the reunion on why the bridge still stood:

"I asked for 600 kilos (1,320 pounds) of army explosives; I received 300 kilos (660 pounds) of commercial explosives; they were to be exploded electrically; we activated the detonator; only one charge went off causing a crater in front of the bridge.

"The main charge did not go off; a tank round must have hit the pipe carrying the cable to the explosives."

Jacob Kleebach, 64, now a Remagen carpenter, then a sergeant of the bridge security force: "All those stories are not true. Nobody knows. It just didn't explode."

"Maybe a shell hit the wire. There was one American tank firing point-blank at the tower. It didn't do nothin' to that tower. All we know was the Germans didn't blow it, so we went across."

WILLI Michels, Coblenz newspaperman then a combat correspondent at Remagen: "A technical mistake. The soldier made an error. The war was over for al practical purposes anyway. The townspeople felt it was a good idea to save the bridge."

Anton Klute, 62, Remagen watchmaker and then an army telephone operator a the bridge: "An American grenade hit the cable."

Mrs. Karen Loef, Remagen resident, then an interpreter for city hall and one of a group of German civilians and soldiers captured in a tunnel at the eastern end of the bridge:

"Nobody really knows. There was too much confusion. I've worked with a lot of researchers on the subject, and nobody knows."

Some Germans think the bridge defenders were traitors who deliberately failed to destroy the bridge.

Whatever the cause of the initial failure, the bridge did collapse 10 days later, carrying 24 Americans to their deaths.

Goering immediately claimed that the Luftwaffe did the job. This was disputed, and still is being disputed.

At the reunion, Bratge said there were two causes of the collapse: (1) American bombing two months earlier, and (2) overuse.

In December 1944 and January 1945 American bombers scored several hits on the bridge, and it was out of service for two weeks, he said.

During the night of March 6 and up to noon March 7, seven or eight trains and a steady stream of retreating German vehicles went over the already weakened bridge.

Then, after the Americans captured it, they sent heavy tanks over it, Bratge said.

"They (the Luftwaffe) never bombed it. There was too much ack-ack. No German artillery fire hit it.

"It collapsed because it was remodeled. The engineers put heavy planking over the rails and removed some of the supports.

"It was a case of a rail bridge being converted to a vehicle bridge, and it just couldn't stand the conversion."

SMITH now is with the 50th Tactical Fighter Wing at Hahn Air Base, Germany.

"All those heavy vehicles going over it did it. It never was intended for that type of traffic. Of course, it was already weakened. Three divisions is a lot of people.

They were walking across it in broken step."

Lt Col Robert M. Dill, commanding officer of the Petroleum Distribution Comd at Zweibrucken, Germany, and then a member of the 9th Armd Div, in a recent letter to The Stars and Stripes declared:

"The bridge fell of its own accord while the 276th Engr Bn was repairing a truss which had been damaged when the Germans attempted to blow up the bridge."

The bridge fell on March 17. Its last 10 days were its most glorious.

Ironically, it was named after Gen Erich Ludendorff, German's master strategist of World War I.

And more ironically, the granite twin towers — all that remain of the bridge at Remagen — now are a lovers' trysting place.