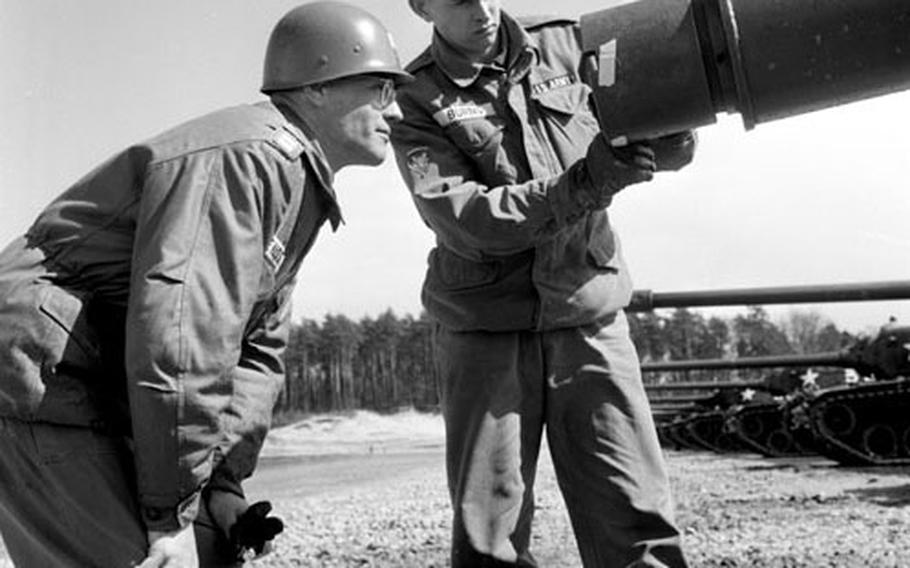 Capt. Thomas J. LeVasseur of the 2nd Heavy Tank Battalion checks out the equipment during the 1960 exercise at Bergen-Hohne. (Red Grandy/Stars and Stripes)

Take 18 powerful tanks, park them side by side on a specially designed concrete pad, set up targets about 1,800 yards downrange and fire for record. The resulting din is guaranteed to make a boiler factory seem peaceful by comparison.

This is the type of action that is taking place five days a week at Bergen-Hohne, Germany, now and through a nine-week period as the 7th Army conducts its 1960 tank gunnery program. The shoot is hosted this year by V Corps' 4th Armor Gp, commanded by Col Frank M. Muller, who is also gunnery program director.

By the end of the nine-week "big shoot," nearly 5,000 gunners of the 7th Army, including Berlin Comd, will have had a week of firing, and all combined will have used up $9 million worth of ammunition. Gunners who fire in the heavy tanks — M103 and M103A1 — will use up about $3,400 worth of ammunition per man in the five days.

The Bergen-Hohne range covers 100 square miles and was constructed in 1934 by the German Wehrmacht to accommodate 100,000 troops. During and after 1941, about 50,000 Russian, Yugoslav, Belgian and French prisoners of war were used as camp laborers at the garrisons and on the ranges.

At one time, when the ranges were in use by the Wehrmacht, there was an underground bunker where officers could observe the firing results close up and direct the tankers by telephone.

Capt. Thomas J. LeVasseur of the 2nd Heavy Tank Battalion checks out the equipment during the 1960 exercise at Bergen-Hohne. (Red Grandy/Stars and Stripes) 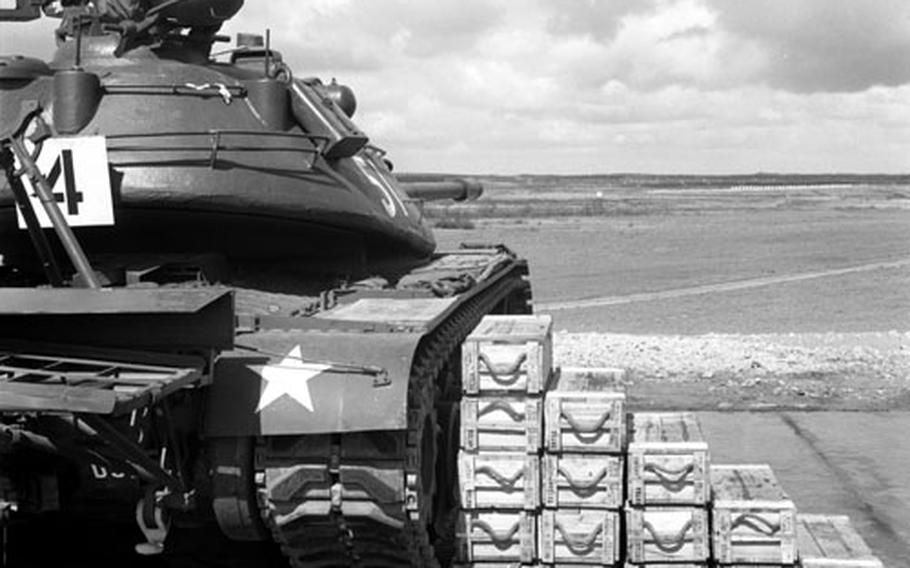 A makeshift stairway to the turret. (Red Grandy/Stars and Stripes) 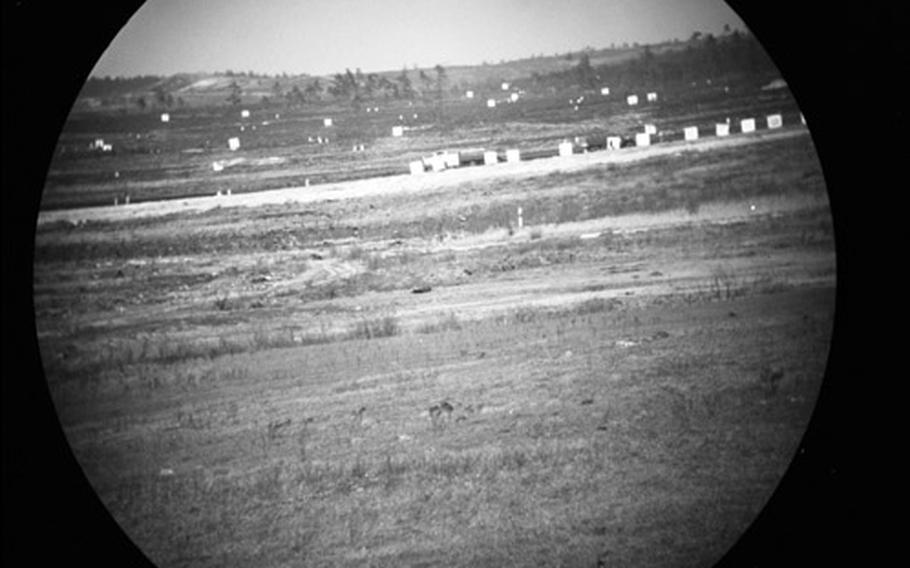 A view of the target area through the sighting scope of an M103 tank. (Red Grandy/Stars and Stripes) 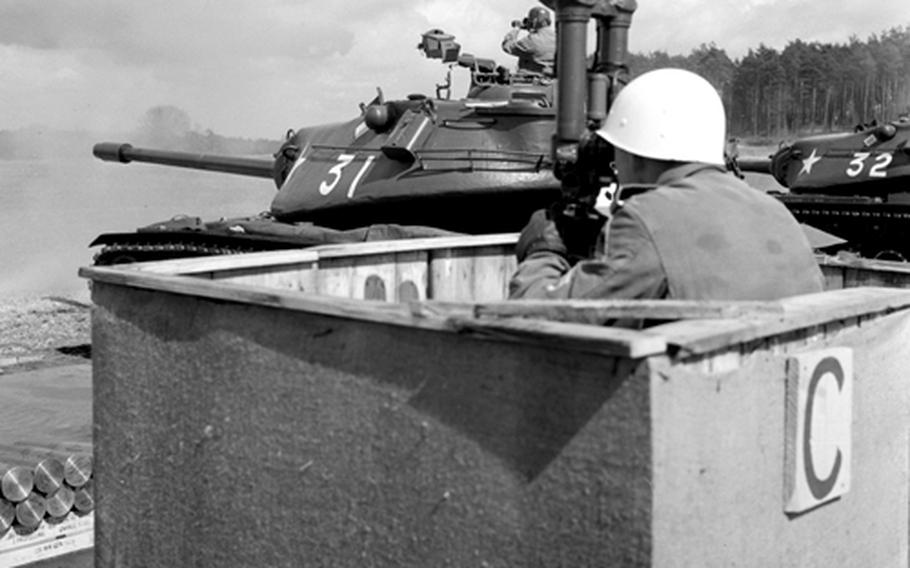 An observer keeps his eye on the target during the firing competition. (Red Grandy/Stars and Stripes) 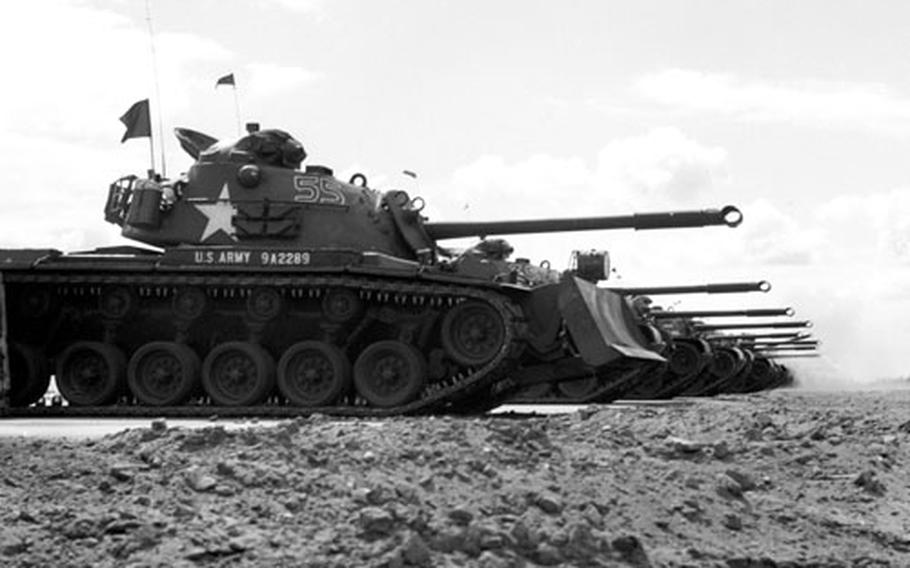 Tanks line up at the target area. (Red Grandy/Stars and Stripes)

Today U.S. Army forces use the ranges .in a guest status as the post is now a NATO installation and operated by the Northern Army Gp (NORTAG). Units from The Netherlands, Belgium, Germany and Britain also participate in training on adjacent ranges.

The range is said to be the best in the world because of its size and facilities. The range allows ample room to fire all "tables" — the categories of firing for different qualifications.

During the fifth week of firing, 3d Armd Div units took part along with tankers from the Berlin Comd. Closing out the final week of firing beginning May 23 will be gunners from the 8th Inf Div and 11th and 14th Armd Cav regiments.

Of about 2,500 men who had fired midway through the nine-week shoot, 1,132 qualified as master gunners, which means they made 375 points or more out of a maximum 400.

"We are shooting better this year than ever before," a range official said. It won't be known until the end of the exercise how many made the "400 Club," the maximum score, but a recent member was Sp4 Thomas P. Murphy of Co D, 2d Heavy Tank Bn, whose home is. in Detroit.

Murphy was with the 18 heavies, M103s, on Range 7C, firing in the rain under direction of Capt Thomas J. LeVasseur, also of the 2d Heavy Tank Bn. LeVasseur pointed out to the HE (high explosive) shells his tanks were firing that contained the stamp "X-rayed." This examination is made from time to time, he explained, to check for any defects in the shells.

Once the shell is fired, the tank recoils a couple of feet and must be moved back into position on the pad. Standing in observation towers behind the line of fire are the BC scope operators who take a reading on the six-by-six foot target panels as a tracer indicates a hit or miss. They relay the information to the tank commander for adjustment and scoring.

Getting a firing project of this size going and keeping it working efficiently is no small order, program director Muller explained. Arrangements for the range have to be worked out with our allies, billeting must be set up and all of the other logistics taken care of.

The tanks are brought to the area by trains, and the men participating for the week arrive on Sunday mornings. Doctors and dentists and technical representatives are in attendance. They even have a band to great the troops and serenade them on departure.

It's hard work all around, but some provision for off-duty recreation is provided. Tours are arranged and on Saturday morning the presentation of awards takes place. By the following Sunday a new trainload arrives and the one-week "oldtimers" board the same train for the return home.