Fast take: 'Zero tolerance means absolutely nothing in the military' 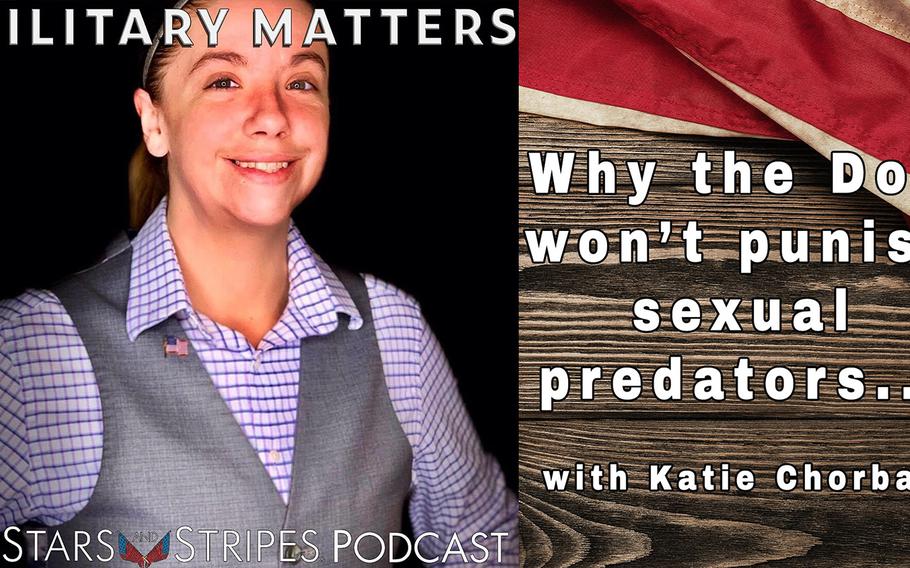 Katie Chorbak, Army veteran and founder of the Our Sister's Keeper Movement, doesn't hold back when talking about sexual assault and the military: "Zero tolerance means absolutely nothing in the military."

In this fast take episode of Military Matters, co-hosts Rod Rodriguez and Jack Murphy talk with Chorbak about why she believes the Department of Defense doesn't actually punish sexual predators, about how the "zero tolerance" policy repeatedly has been ignored and about the current status of the #iamvanessaguillen bill.

At a Senate hearing Wednesday, Sen. Kirsten Gillibrand, D-N.Y., noted that Congress has provided the military more than $1 billion, enacted 249 legislative provisions, and chartered panels, commissions and committees to address sexual assault in the military, yet the statistics from the past 15 years show little progress.

“Military leadership has come before us and said that the chain of command would solve this problem," Gillibrand said. "They're not solving the problem. They have failed.”

Is civilian oversight needed? Should veterans and service members be able to sue the DOD over negligence? Chorbak says yes.

"Outside of the military victims have rights. There's a bill of rights," Chorbak said. "Now in the military that is not the norm."

That issue, in part, is what the I Am Vanessa Guillen Act was attempting to address. Named for Fort Hood Army Spc. Vanessa Guillen, who was slain last year, the bill stalled in Congress. Chorbak and a collection of groups had some ideas on how to improve it.

"It was a collaborative of 10 different organizations and women across the country that came together, looked at the bill line by line and came up with suggestions of how to change it to be better and more beneficial to today's service members," Chorbak said. "Right now we're just waiting for a reintroduction."

Meanwhile, Chorbak said she will continue to be an activist and an advocate.

"Fighting for change so that when I have children, if they want to join, I know they're just like this much more safe," she said. "I don't have to worry about what happened to me happening to them. And if it does, it's going be taken care of properly instead of ignored."