Sarajevo's ski resorts have bounced back after war 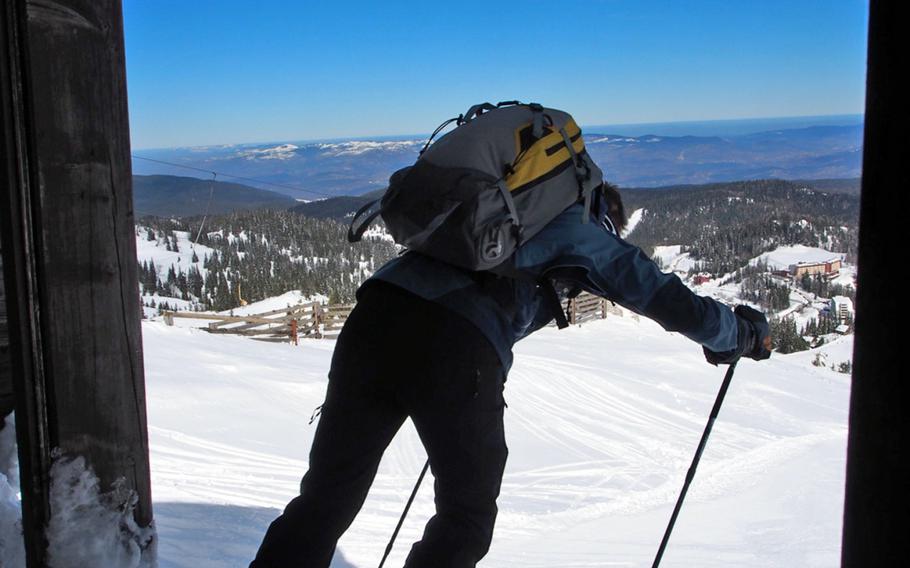 Buy Photo
Guilhem Gineste pushes out of the old ski shed that served as the starting point for Olympic ski races in 1984 at Jahorina Resort near Sarajevo, Bosnia-Herzegovina. (Heath Druzin/Stars and Stripes)

Buy Photo
Guilhem Gineste pushes out of the old ski shed that served as the starting point for Olympic ski races in 1984 at Jahorina Resort near Sarajevo, Bosnia-Herzegovina. (Heath Druzin/Stars and Stripes) 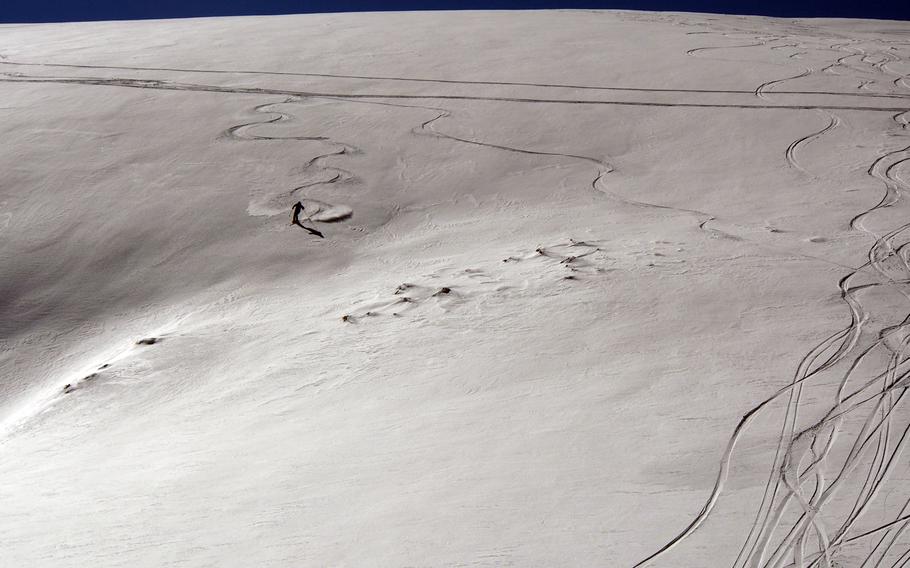 Buy Photo
Just outside the resort boundaries of Bjelasnica ski resort near Sarajevo, Bosnia-Herzegovina, skiers can find untouched powder long after storms. Beware, though. Between land mine and avalanche danger, it's best to hire a guide to explore the backcountry. (Heath Druzin/Stars and Stripes) 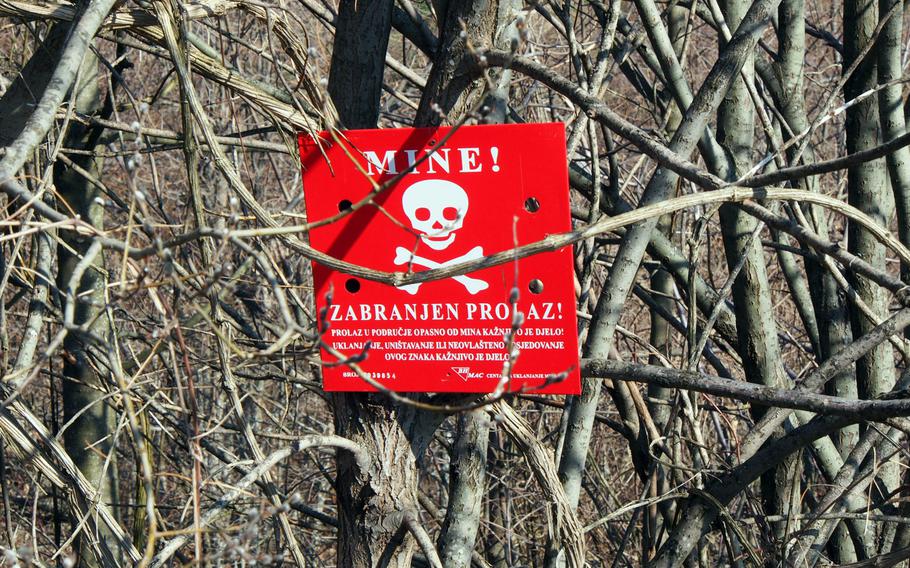 Buy Photo
Land mines still blight much of the landscape off the roads to Sarajevo's two ski resorts, Jahorina and Bjelasnica. Both resorts served as key military strongholds during the devastating Bosnian War in the 1990s. (Heath Druzin/Stars and Stripes) 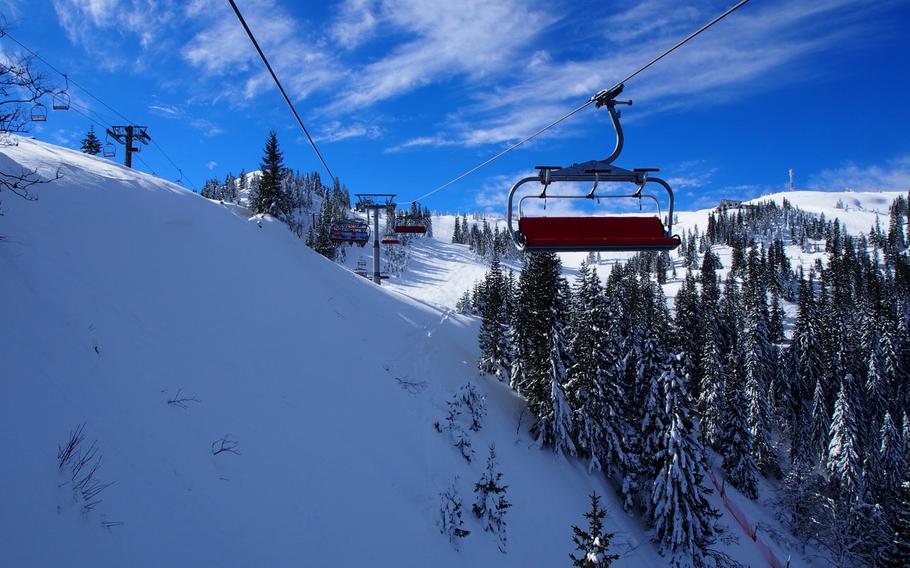 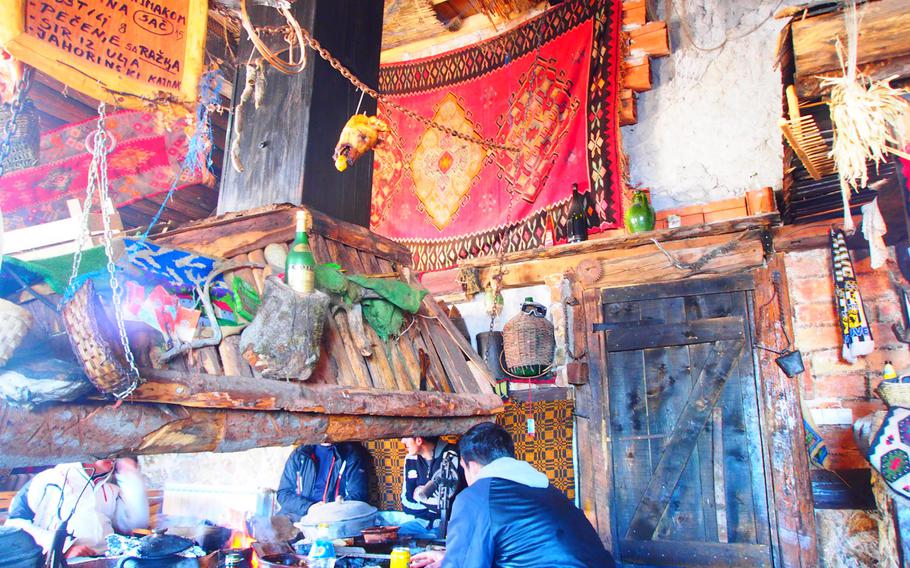 Buy Photo
A rustic bar at the summit of Jahorina ski resort, near Sarajevo, Bosnia-Herzegovina, provides skiers a respite from the snowy cold. (Heath Druzin/Stars and Stripes) 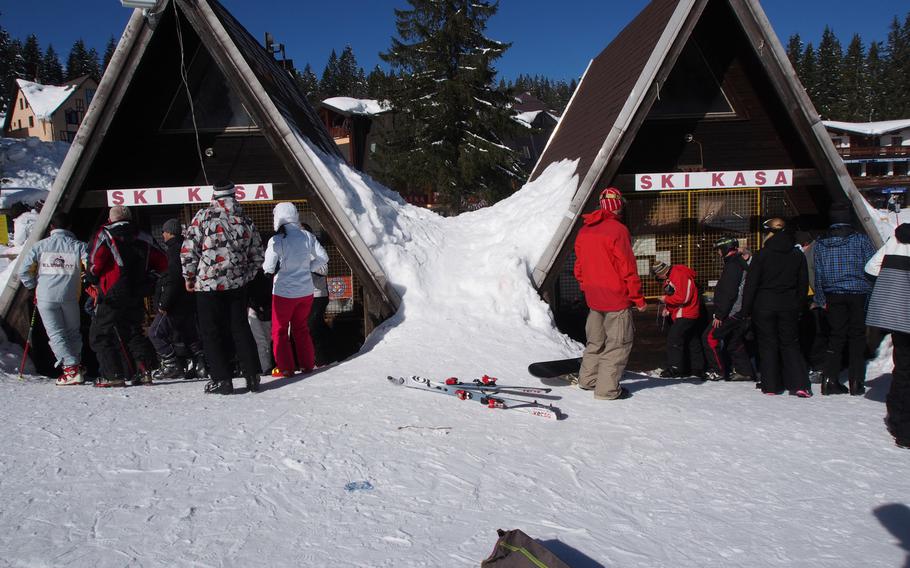 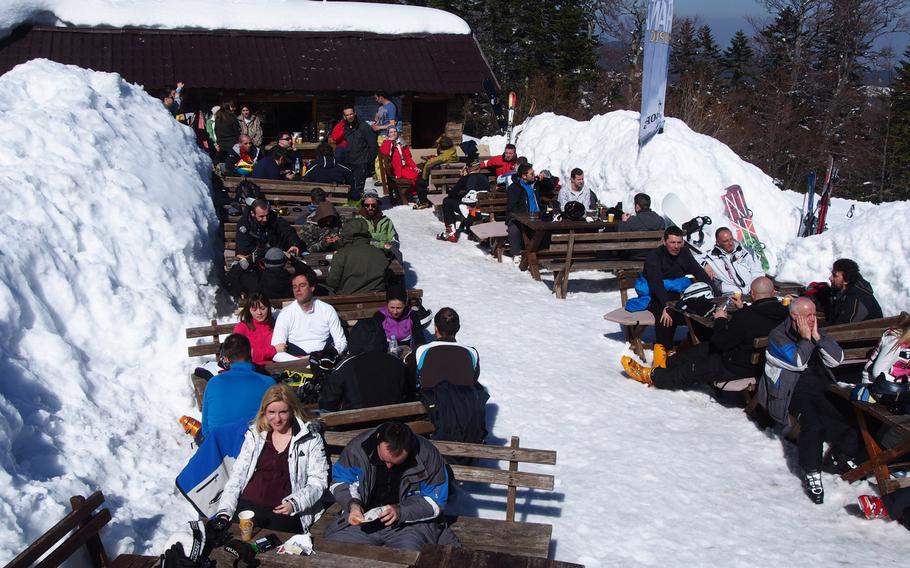 Buy Photo
Skiers and snowboarders relax and enjoy some refreshment and some sun at Bjelasnica ski resort near Sarajevo, Bosnia-Herzegovina. (Heath Druzin/Stars and Stripes) 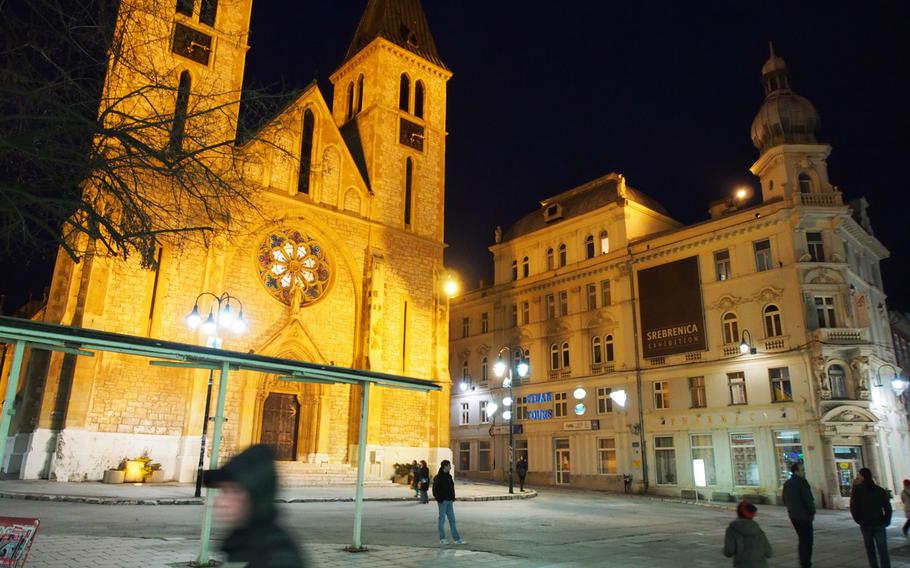 Buy Photo
Downtown Sarajevo, Bosnia-Herzegovina, is a great base for ski trips and has a buzzing, historical city worth exploring in its own right. (Heath Druzin/Stars and Stripes) 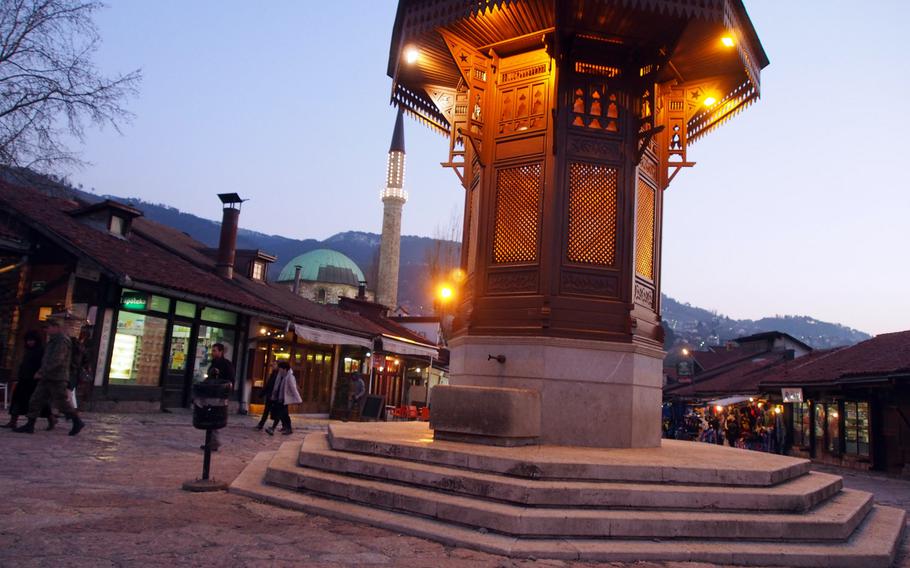 Buy Photo
The fountain in Sarajevo's Bascarsije, or Old Town, where skiers will find ancient buildings, winding lanes full of artisans, and cozy coffee shops. Sarajevo is less than an hour from Bosnia-Herzegovina's best skiing. (Heath Druzin/Stars and Stripes)

It might come as a surprise to younger readers, but Sarajevo, Bosnia-Herzegovina, was once synonymous with world-class skiing.

Before war and ethnic strife put this mountain capital in the spotlight for the wrong reasons — before it even was the capital of an independent Bosnia — it was host to the 1984 Winter Olympic Games and the winter sports epicenter of what was then Yugoslavia.

While much of the polished veneer has yet to return to the city’s main ski areas, Jahorina and Bjelasnica, the slopes are still solid. They offer some of the cheapest skiing in Europe — all just a 40-minute drive from a cosmopolitan capital where cozy coffee shops, diverse restaurants and a thriving nightlife can be found amid Ottoman and Hapsburg architecture.

Both resorts were venues for downhill skiing events during the 1984 Winter Games, which featured a dramatic, snowless run-up. Bosnians today like to regale visitors with the seemingly mythical events leading up to the games, when the mountains were nearly bare and, just one day before events were to begin, a massive snowstorm saved the day.

The resorts’ history darkened a few years later, when both became strategic spots for soldiers fighting in the Bosnian War, part of the bloody break-up of the former Yugoslavia. More than 10,000 people were killed in Sarajevo alone during a 3 1/2-year siege of the city.

Now, though, the resorts are back up and running. While amenities are basic by Western European standards, the relaxed atmosphere and ample terrain more than make up for the lack of high-speed lifts.

Some of the best skiing is at Bjelasnica, just off the groomed runs, with easily accessible back and side country, though skiers need to check avalanche conditions and land mine danger. It’s best to go as part of guided tours, which are available at both areas. On a sunny late winter day, with the main runs long since tracked out, I found plenty of fresh powder days after the previous storm.

The slopes themselves offer plenty of options, too, with long, well-groomed cruisers and some decent, above-tree-line steeps up top. The only drawback is the primitive lift system, with just one chairlift and the rest of the mountain accessible by surface lifts. It takes a while to get to the top, but it’s worth it, especially on an empty midweek day when skiers will have wide-open bowls to themselves.

Jahorina, too, has plenty to offer and its terrain is less challenging than Bjelasnica’s. It also has a more modern lift system. The slopes are well-groomed and there’s a small, well-developed village at the base with more après-ski options than its neighbor. The top of the mountain, too, offers majestic views of the Dinaric Alps and the valley below.

You can also take in a piece of Olympic history: A weather-beaten wooden shed that served as the starting point for ski races during the 1984 games still clings to one of Jahorina’s slopes. You can launch yourself out, doing your best impression of brash Bill Johnson, the chippy American who won downhill gold in the ’84 games.

Getting there: Direct flights to Sarajevo are scarce, but it’s an easy and inexpensive one-stop journey from most of Europe.

Accommodations: Both resorts have on-mountain lodging, but Sarajevo is the logical base for trips, given its proximity.

More information: It would be a shame not to take at least a day to explore the winding cobblestone streets of the old city, replete with ancient mosques, churches and buzzing coffee shops. Despite its tragic recent history, Sarajevo has emerged a cosmopolitan city with numerous lodging options ranging from inexpensive pensions to luxury hotels.