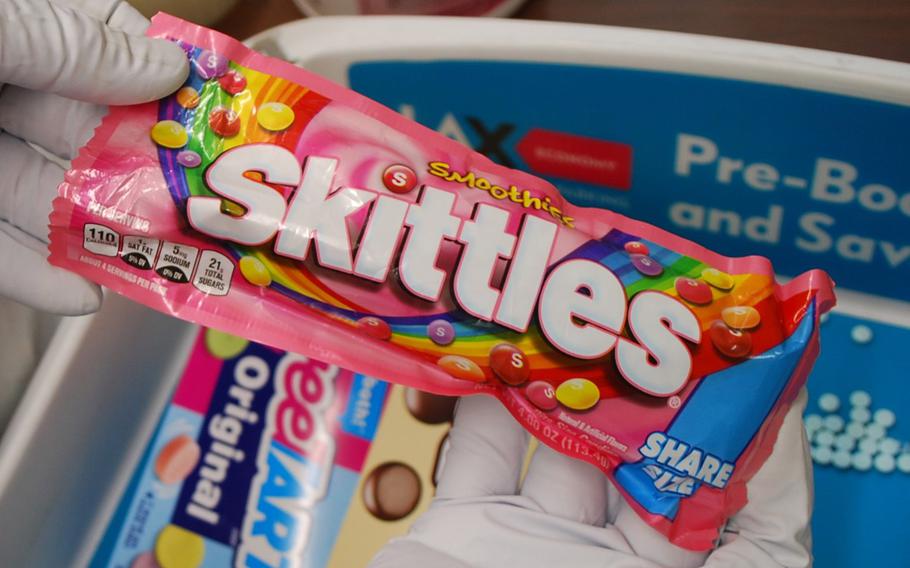 Day in and day out, Transportation Security Administration officers uncover items that are not permitted through security checkpoints. Most are removed with little fanfare, such as water bottles, tubes of toothpaste and jars of homemade preserves. However, every year a number of concealed objects — including weapons and drugs — that involve a high level of creativity, sneakiness or gall are inducted into the agency’s list of Top 10 Catches.

“These are what we call good catches,” Lisa Farbstein, an agency spokeswoman, said of the video compilation that appears on TSA’s social media platforms the last week of the year. “The list offers recognition to the TSA officers across the country, because they catch things.”

The list dates back to at least 2016, when the champions included dead sea horses in a brandy bottle from the Detroit Metropolitan Wayne County Airport, a bullet-bedazzled gas mask from Miami International Airport and a movie prop corpse at Hartsfield-Jackson Atlanta International Airport. In 2021, the honors went to a chain saw from the Louis Armstrong New Orleans International Airport, bullets stashed in deodorant at Atlantic City International and meth wrapped in a burrito at Houston Hobby Airport.

Throughout the year, TSA’s regional spokespeople share security checkpoint discoveries with the social media strategy team, which often pairs photos of the unmasked items with a snappy or dad-jokey caption. For the annual list, the team’s five judges choose the winners from this pool of posts. They weigh several other factors, such as the amount of online engagement, the quality of the photo and the range of the airports. Incidents may also earn points if they contain a certain degree of genius — or foolishness.

“The video is for the shock value,” Farbstein said, “but it also makes for great cocktail conversation.”

No. 10: Cash in crutches at El Paso International Airport

A passenger’s crutches triggered the alarm when officers noticed an unusual object in the base of the mobility aid. The mysterious wad turned out to be literally dirty money, an object that does not fall under TSA’s definition of “things that can cause a catastrophic incident on a flight.”

“Why are you trying to conceal something that is allowed through security?” Farbstein asked. “You didn’t have to do that.”

Farbstein said officers find a surprisingly high number of hand grenades. Even if it’s inactive, the weaponry is not permitted because it can create panic among passengers on a plane. She recommends stashing the explosive item in your car, handing it over to a non-traveling companion or surrendering it to a TSA officer. Or maybe just leave the hand grenade at home.

Officers extracted a pair of electric cattle prods tucked inside a guitar case. The bovine pokers ran afoul of the TSA rule that forbids tools longer than seven inches, which could be used as a bludgeon.

“They would have been fine in a checked bag,” Farbstein said. The guitar was allowed to board.

No. 7: Gun in a PlayStation at the Atlanta airport

Explosives hidden in electronics are a major concern, so finding a weapon inside the video game console was an especially gratifying catch for TSA.

“PlayStations don’t come with guns in the middle of them,” Farbstein said.

No. 6: Drug-filled scrunchies at Boise Airport in Idaho

This passenger raised more than a few hairs by trying to sneak small bags containing suspected drugs in the 1980s fashion accessory. TSA handed the perpetrator over to the police.

No. 5: Knife in a laptop at Richmond International Airport

After the passenger’s bag set off the alarm, the officers had to re-scan each item. They homed in on the laptop and, after unscrewing its covers, removed a knife from its electronic innards.

No. 4: Gun in a sling at the Greater Rochester International Airport

The X-ray machine noticed something suspicious about the man with the arm sling. Officers asked him to remove his limb support. According to Farbstein, he warned that the sling was “a little heavy.” His response to their discovery: “I forgot I put it in my sling.”

“It was inches from his skin, and he forgot?” Farbstein said.

This is why TSA checks medical equipment such as wheelchairs, canes and crutches — too many places to stash illicit goods.

This event occurred just in time to make the 2022 list: On Dec. 22, officers extracted parts of a disassembled handgun from two jars of Jif peanut butter. The passenger carefully wrapped the weapon in plastic, so that the smooth (not chunky) sandwich spread wouldn’t gum up the gun.

Peanut butter is not allowed in the cabin, even if it contains just peanuts, no armaments. Farbstein said passengers can travel with the foodstuff in their checked luggage, though officers may swab the container.

“It always triggers an alarm. It might have explosive material,” she said.

The man who thought he could get away with this nutty subterfuge was arrested.

No. 2: Gun inside a chicken at Fort Lauderdale-Hollywood International Airport

The violated fowl was a fan favorite, receiving more than 34,000 likes on TSA’s Instagram account. The passenger had jammed the wrapped gun inside the raw, pink-skinned bird.

“I can see from the X-ray that the chicken was definitely tampered with,” said Farbstein, adding, “You should not stuff your chicken with a handgun. Pepperidge Farm stuffing, maybe.”

No. 1: Pills in candy packaging at Los Angeles International Airport

Less than two weeks before Halloween, a traveler tried to disguise the drugs as candy, placing 12,000 blue pills of suspected fentanyl inside boxes and sleeves of SweeTarts, Skittles and Whoppers.