Branson, Missouri’s holiday wonderland is waiting to be explored 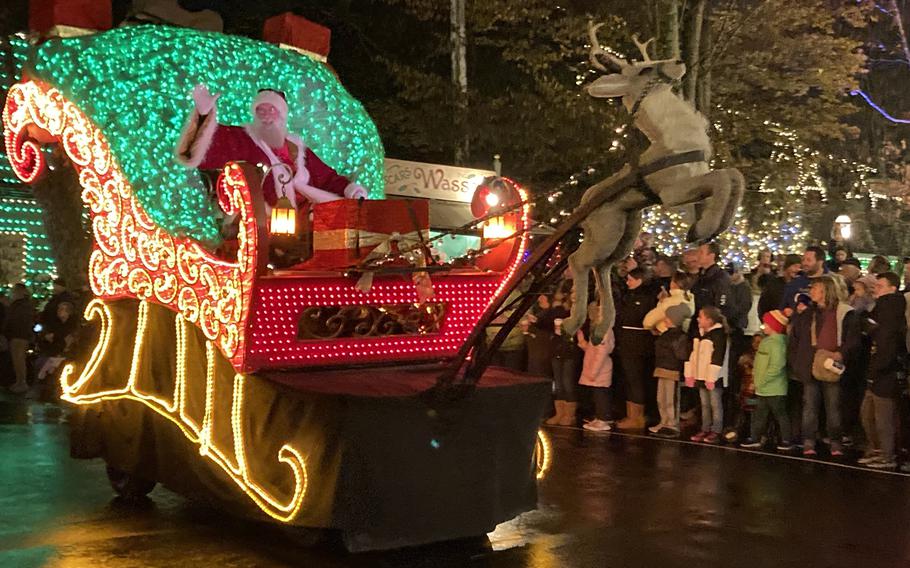 Silver Dollar City has a nightly Christmas light parade, much like those you’d see at Disney with Rudolph as the grand marshal and guest appearances by the Abominable Snowman and Santa himself. (Amy Bertrand, St. Louis Post-Dispatch/TNS)

BRANSON, Mo. — Standing in line at Silver Dollar City, waiting to see its biggest show, the dazzling “Coming Home for Christmas,” I overheard two people talking behind me.

“I wonder if the rides are even open” during the theme park’s Old Time Christmas celebrations, they said.

“Oh, they are,” I told them. “We’ve been riding for two hours, and my kids just ditched me to ride more.”

At a park known for its thrill rides, those were not the thrills this couple, likely in their early 30s, was seeking. They were there for the shows, the songs, the parade and the lights. Oh, the lights. Silver Dollar City has strung up nearly 6.5 million of them. And the place where they are most magnificent is its new Christmas at Midtown, where you’ll find animated reindeer along with stars, snowflakes and angels twinkling overhead and tunnels of dazzling lights. 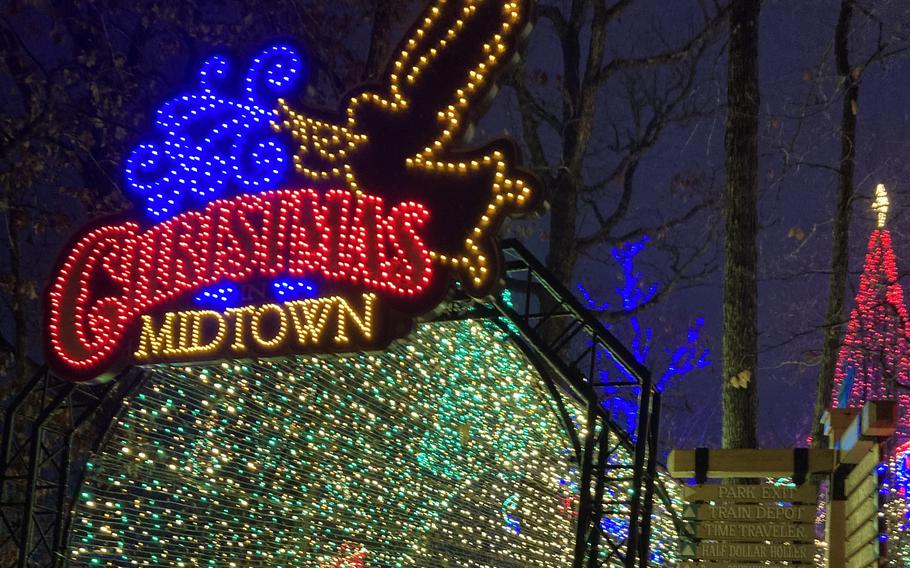 Nearly 6.5 million lights adorn Silver Dollar City, including those in the nightly parade. The lights are most magnificent at its new Christmas at Midtown. (Amy Bertrand, St. Louis Post-Dispatch/TNS)

An Old Time Christmas, which is what the park calls this celebration, runs through Dec. 30. It was named one of the best five Christmas destinations by “Good Morning America” this year, and indeed the entire town of Branson and its Ozark Mountain Christmas made the best holiday town lists at Trip Savvy, the “Today” show and Town & Country magazine.

But Silver Dollar City is the town’s crown jewel when it comes to holiday celebrations. As soon as night falls, you see it in the lights that line nearly every building, tree and path in the park. And just wait until you ride Wildfire or Outlaw Run and view the lights in the dark from above (OK, so they are kind of a blur on those fast rides, but the idea is there).

The food is festive. On the square near the entrance alone are hot chocolate, wassail and peppermint ice cream. A Christmas Tasting Passport for $32.50 gives you five tastings among about 25 restaurants and shops on site.

Shortly after dark is the Joy on Town Square tree lighting. And this is some tree — 80 feet tall and full of lights that dance and change colors in time to the music. I think I watched it for a good 15 minutes. Then I availed myself of some wassail and a cookie and waited for the parade. Guests line up along the parade route as much as 45 minutes early. The biggest crowds are at the town square, so consider following the snowflakes on the ground to a spot toward the beginning or end. But don’t miss it. It’s a light parade much like those you’d see at Disney with Rudolph as the grand marshal and guest appearances by the Abominable Snowman and Santa himself.

The parade is just part of the theatrics here. The shows are the real stars. From a hilarious show at the saloon, “The Frontier Fa La La Follies,” to the Broadway-caliber “Coming Home for Christmas” and the musical take on “A Dickens’ Christmas Carol,” be sure to make time for at least one show.

Let there be lights

You can also find a number of drive-thru light displays in Branson. Lights of Joy offers hundreds of animated scenes. Even the Promised Land Zoo has its own display, with two miles of lights plus a view of the animals, even real reindeer.

Shepherd of the Hills is the town’s longest-running drive-thru light experience with millions of lights and animated scenes as you travel up and down the winding hills. We also opted for the North Pole Adventure there, where a Santa’s Super Ticket ($32.95) gets you a ride down the alpine coaster, access to the challenge ropes course, a trip up a glass elevator to Inspiration Tower and general activities, which include mini-golf, a bounce house, Santa’s workshop, a lighted walk-thru and more. 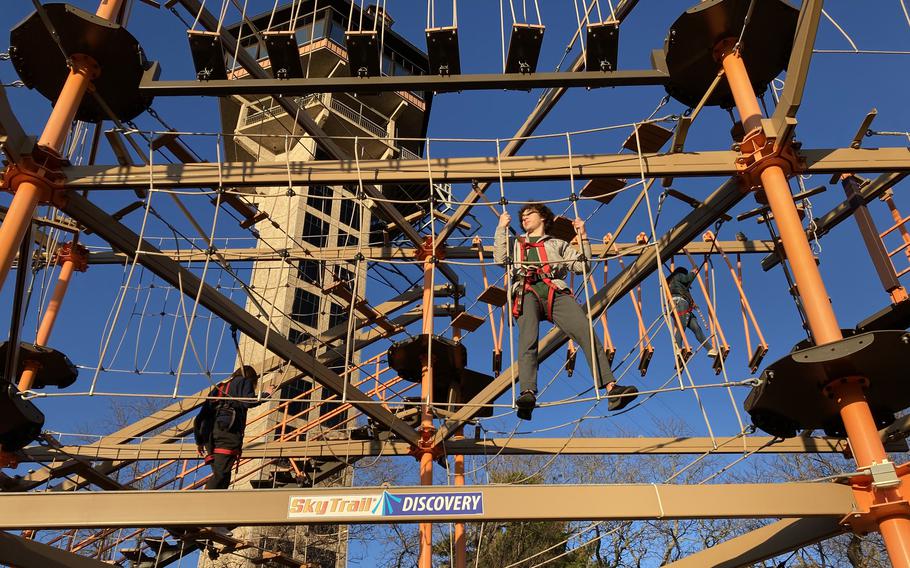 The ropes course at Shepherd of the Hills offers great views of the area. It’s part of a holiday package that includes a light trail, an alpine coaster, Santa’s Workshop and more. (Amy Bertrand, St. Louis Post-Dispatch/TNS)

After we explored the grounds, we headed to the dinner theater there to see “A Shepherd’s Christmas Carol.” We grabbed an iced tea and sat along a row of seats with a counter in front as a dinner of stuffing, turkey, mashed potatoes, green beans and more was served. Then the show started. At first, it seemed a little hokey for my skeptical teens, but by the end, they were laughing and clapping and we all enjoyed the clever spin on the Dickens story.

Let there be adventure

That alpine coaster at Shepherd of Hills is pretty thrilling, but we wanted more, so we also tried out Track Family Fun Parks.

Though there are multiple locations, the main one features a giant Ferris wheel right along the main strip of Branson, across from the Ripley’s Believe it or Not Museum and next to the Titanic Museum. The wheel was, until 2016, the same wheel that towered over Navy Pier in Chicago. It’s huge, and when you get to the top you feel like you are stuck because it does not move fast. But the view of all the holiday lights along the strip and in the Ozark hills is breathtaking.

The Track Family Fun Parks have plenty of other things to do, too: multiple go-kart tracks (including one high-rise tower), an arcade, bumper cars and more. Fuel, a new restaurant on site, serves one of the best burgers I have had — and cheese curds.

One of my favorite parts of our trip was Snowflex Park, an inner-tubing adventure at Wolfe Mountain, which is home to the ziplines you see on Highway 65 heading into Branson. Snowflex uses a synthetic surface (a “polymer composite system”) to send riders flying down a 400-foot hill to the artificial grass bottom (which slows them down). A moving walkway carries riders to the top of the hill (whew!). We saw kids as young as 3 and their grandparents going down. All had giant smiles on their water-sprayed faces.

Let there be shopping

Shopping is made so much more enjoyable by festive decorations and choruses of holiday songs piped over loudspeakers. Along Branson’s Landing, which sits across cliffs and along Lake Taneycomo, you find not only its famous dancing fountains but a 30-foot blue-lighted tree. Included among 100 shops is a moonshine store, which offers tastings and some fun gifts to take home. Restaurants abound, including Guy Fieri’s Kitchen + Bar and White River Fish House from Bass Pro Shops. A zipline flies across the lake and back, and my kids loved the arcade and other games along the brick-lined walk.

We stayed at the gorgeous Hilton Convention Center, right across the busy Main Street from the Landing. Its lobby smelled of fresh pine and its tree rose two stories tall. One night, we caught Mrs. Claus in the lobby reading stories to pajama-clad children. These weren’t the first jammie-wearing kids we saw. Dozens lined up at the train depot, which sits between the Landing and the Hilton and is the launching point for the Polar Express. The train travels to the North Pole to pick up Santa. Cookies and hot cocoa are served and every passenger gets a bell to ring. And proof that the magic of Christmas isn’t just for children: About half of the adults I saw were wearing pajamas, too. 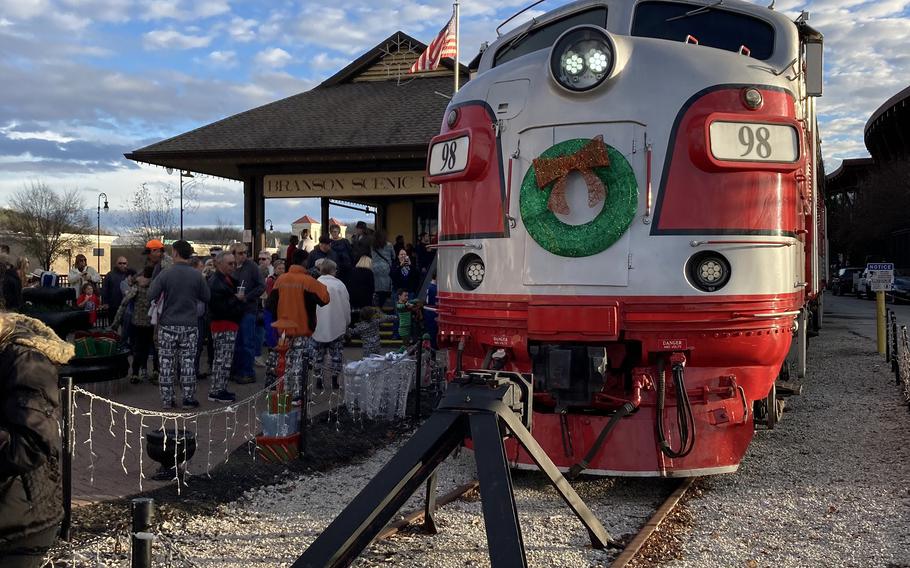 A train waits to take visitors to the North Pole on the Polar Express. (Amy Bertrand, St. Louis Post-Dispatch/TNS)

Snowflex: wolfemountainbranson.com; $34.99 per adult for one hour

Big Cedar: This is the first time I’ve been to Branson in a while without visiting Big Cedar (save for golf). Big Cedar and Top of the Rock have their own huge holiday celebration. Be sure to check them out at bigcedar.com