US airports getting a glow-up For many years, going to the airport in the United States has meant trudging through dark and low-ceilinged terminals, crowding in dreary security checkpoints and throwing elbows to secure one of the few power outlets at the gate.

“A bus depot is not a great way to describe it, but that’s kind of the methodology that a lot of American passengers saw,” said Ty Osbaugh, an architect who helps lead the aviation practice at the architecture firm Gensler.

Airports built in the 20th century were largely designed to get customers in, out and through as quickly as possible. They didn’t account for the high volume of passengers we see today or the logistical demands the age of Homeland Security would create. According to the trade group Airports Council International-North America, the average airport terminal in the United States is more than 40 years old.

That’s not the case overseas, where some of the world’s grandest airports are designed for passengers to actually enjoy their experience. In Singapore’s Changi Airport, for example, a towering indoor waterfall, forested walking trails and a glass-bottom bridge compete for travelers’ attention. It’s given many Americans “terminal envy,” Osbaugh said.

Now, U.S. airports are catching on with a wave of modernization projects. With the urgency higher than ever — U.S. airports are in need of $115 billion in improvements, according to a 2021 survey by the airport trade association — and an injection of funds from the bipartisan infrastructure law, there’s new money and momentum for version “2.0 of airport design,” Osbaugh said.

“I think we’re always going to be in a constant need to upgrade,” said Kevin Burke, president and CEO of Airports Council International-North America. “Not all airports are going to be modernized at the same time.”

To get a better understanding of the design trends that will define our airport experience in the future, The Washington Post examined renovations that are either in progress or were recently completed at six U.S. airports: Orlando International, Los Angeles International, Dallas Fort Worth International, Portland International, Pittsburgh International and New York City’s LaGuardia Airport.

Airports across the country are investing billions to help passengers “look forward to the time they spend at the airport, instead of just really hating it,” said Harriet Baskas, creator of the blog Stuck at the Airport.

At Dallas Fort Worth International, a $2 billion expansion to Terminal C that opened over the summer is supposed to help customers relax in comfort, said Khaled Naja, the airport’s executive vice president for infrastructure and development. Naja said the four new “High C” gates feature high ceilings; large, tinted windows that let in copious natural light; and seating areas designed both for solo business travelers who need a quiet space to work and families or larger groups. Every seat features a wireless charger.

At Portland International Airport in Oregon, a new main terminal set to open in 2025 as the centerpiece of a $1.5 billion project is laid out like an indoor version of a small town’s main street. It will feature wide corridors lined by trees and local shops and restaurants.

Pittsburgh International Airport’s new $1.4 billion terminal, also scheduled to open in 2025, will include outdoor terraces both pre- and post-security.

“We want people to have access to fresh air,” said Christina Cassotis, CEO of the Allegheny County Airport Authority. LaGuardia’s Terminal B opened its final two gates in July as part of an $8 billion overhaul for the airport. Developers wanted to build a space that felt more like a “nice hotel” than a transportation hub, said Stewart Steeves, chief operating officer of Vantage Airport Group, part of the group that is redeveloping and managing the terminal. That means using tile on the floor instead of the more institutional-seeming terrazzo, incorporating art in the check-in area, providing “hotel-style” baggage carts that are less loud and using sound-absorbing materials.

On the way to gates, there are indoor parks with plants and trees and children’s play areas where kids can customize a plane on a tablet, then watch it fly on a giant digital screen. These are “in-between” spaces where people feel removed from a boarding lounge, Steeves said. DFW’s new gates also feature massive digital signs that can be seen from a distance and indicate the status of a flight, meaning customers never have to rush to the gate to check on their flight, Naja said. In the meantime, they can visit the terminal’s new “smart restrooms,” which include digital indicators as to whether each stall is occupied. 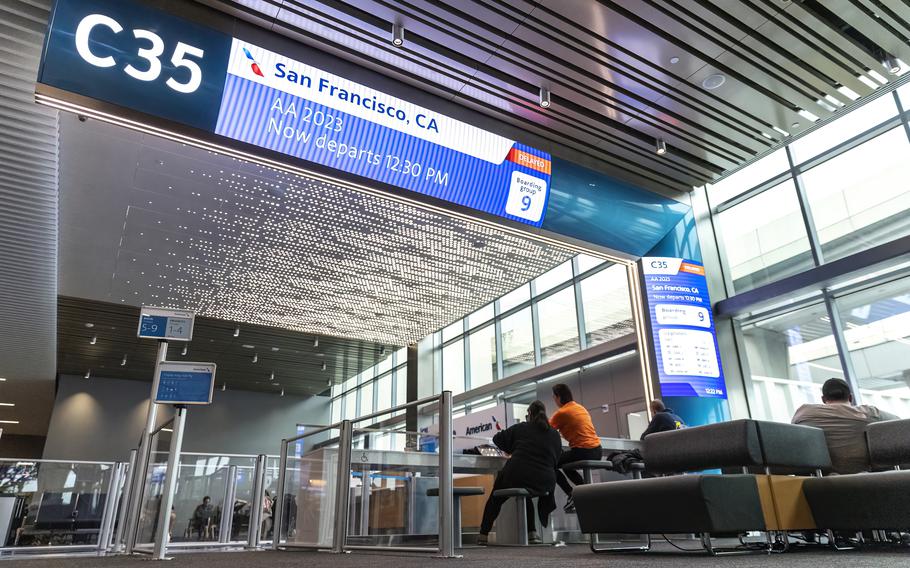 The new High C gates at Dallas Fort Worth International feature massive digital signs so that passengers can see their flight’s status from across the terminal. (Chris Bousselot/DFW Airport)

Long maligned as one of the worst parts of travels, airport bathrooms have seen significant improvements in recent years. Philadelphia International received $24 million from the bipartisan infrastructure law to overhaul 30 restrooms, and the facilities in Tampa International’s Airside C — which feature a clean, contemporary aesthetic and personal paper towel dispensers and trash cans at each sink — were recently named the nation’s best restrooms by Cintas, beating out those of spas and top restaurants.

Steeves is enthusiastic about the restrooms in LaGuardia’s Terminal B, where stalls were designed to fit a human and a suitcase without requiring a contortion act to reach the toilet.

Creating a ‘sense of place’

Several airports are focusing on highlighting the city they serve, adding some local flavor into drab facilities that may seem to exist in a kind of geographic purgatory.

In Pittsburgh, the roof has been designed to represent the area’s rolling hills. Steel columns that look like trees are meant to “provide an aesthetic sense of place, evoking the woods of Western Pennsylvania,” the airport says.

A 9-acre wood roof in Portland’s forthcoming main terminal marks a first in airport construction. Built in a lattice of exposed wood sourced from a 300-mile radius of the city, the roof is more sustainable and seismically resilient than steel, Port of Portland chief projects officer Vince Granato said.

It’s designed to be “like a walk in the forest, which is what we’re famous for out here,” he said. “It’s like a tree canopy with lots of skylights.”

At Orlando International Airport’s new $2.8 billion Terminal C, which started welcoming flights in September, an “open, airy environment” was the goal, said Greater Orlando Aviation Authority CEO Kevin Thibault. Skylights allow sun to filter through the high ceiling that towers over a portion of the terminal; below, “forever trees” using preserved material from palm and cypress trees line the walkway.

“What we did was try to create that type of environment ... so you know you’re in the Sunshine State,” he said.

Imagine an airport experience where you can go from the curb to the gate without pulling out your boarding pass or a phone, or without even slowing down.

That’s the future that advancements in technology might be able to offer within a decade, Osbaugh said. With facial recognition tech, passengers will be able to place their bag on a belt themselves, walk through security, purchase concessions and board their flight without a physical ID.

Already, the Transportation Security Administration is testing facial recognition technology at 16 airports across the country, a rollout that has generated some controversy, The Washington Post reported. In other seemingly sci-fi moves, Delta unveiled technology at Detroit Metropolitan Airport this summer that shows travelers their personalized flight information on a giant shared screen. The “Parallel Reality” has not yet expanded to other airports.

Some futuristic features are already in place at Los Angeles International as part of the airport’s broader digital transformation initiative, including self-service bag drops and boarding with facial scans on international flights, according to Justin Erbacci, the CEO of Los Angeles World Airports.

“We’re at the forefront of the use of biometrics here to make the passenger journey more secure, but also easier and contactless for the customer,” he said. 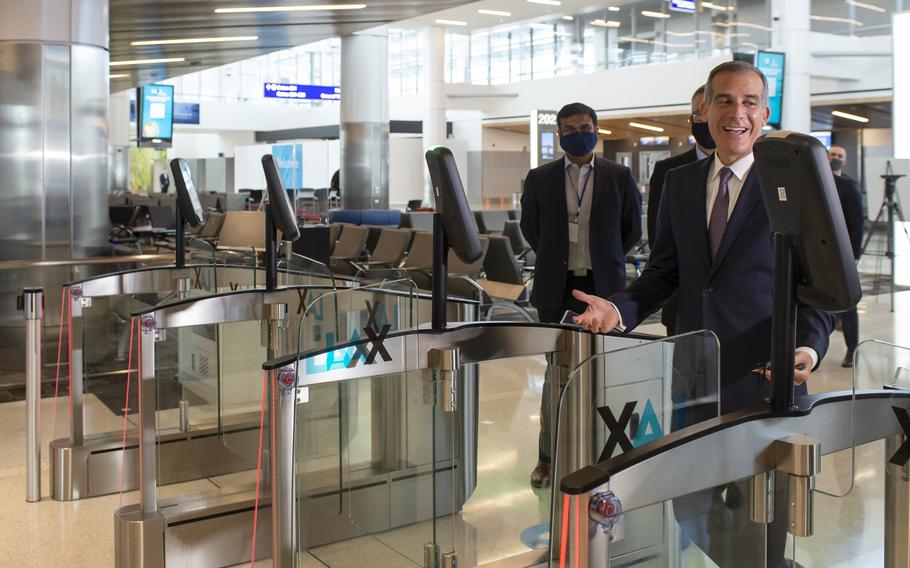 LAX is also aiming to make it possible for a passenger to control their entire airport journey through their phone, including a smart parking system that guides drivers to an open spot, the ability to reserve a time to go through the security checkpoint instead of queuing, and mobile food ordering so passengers can skip the line at Starbucks, Erbacci said.

At Orlando International Airport’s new terminal, each gate has biometric screening devices. That means all international passengers can use facial recognition technology instead of showing boarding passes. Thibault said the airport has been working with the TSA and Customs and Border Protection with the goal of using the same technology for domestic flights.

At TSA checkpoints, bins are automatically brought to the screening area and returned. If someone leaves anything inside after going through a checkpoint, a sensor will not allow it to return.

“All that has streamlined the processing so we are efficiently putting passengers through the security lanes,” Thibault said.

One factor limiting airport modernizations across the country is space, especially at city airports like LaGuardia.

To solve that problem, engineers for LaGuardia’s new Terminal B built vertically, with food and shops on the fourth level down to ground transportation on the first.

Osbaugh said LaGuardia will be a “test bed” for future terminals which might be even taller.

“It’s kind of like the Guggenheim, where you start on the upper level and you just kind of spiral down,” he said. “You can then start to use the verticality of the space to create different zones for passengers and let them choose what they want to do.”

In the first project of its kind for an airport terminal, Dallas built its new High C gates using modular construction, meaning the building was constructed elsewhere at the airport, carried on modified NASA transporters overnight and set onto a foundation, Naja said.

The construction process — which Naja said has been used for airport bridges and connectors, but not a terminal — allowed the airport to finish the new gates four months early and under budget. It also never had to shut down existing parts of its terminal or impact flight operations.

To meet a Biden administration goal that the aviation industry reaches net-zero emissions by 2050, the FAA is offering grants to U.S. airports to put clean tech projects in place, develop sustainability plans and buy zero-emissions cars, buses and other vehicles.

New building projects are turning to solutions like reflective glass for energy efficiency and different sources of fuel for air conditioning and heat, Burke said. On the airfield, more are using battery-powered vehicles than those powered by diesel.

Dallas is already the “largest carbon-neutral airport in the world,” and is aiming to have net-zero emissions by 2030, Naja said. LAX is aiming for net-zero by 2045, according to Erbacci.

On a smaller scale, the Orlando airport now has 360 floating solar panels, which it calls “a first step in the evaluation of using renewable energy.”

LaGuardia’s new Terminal B has earned LEED Gold certification by the U.S. Green Building Council, a measure for sustainable construction. According to a news release, nearly all of the debris recycled from the terminal’s garage demolition went to new construction.

The terminal was designed in such a way as to reduce energy costs 18% and reach water savings of more than 43%.