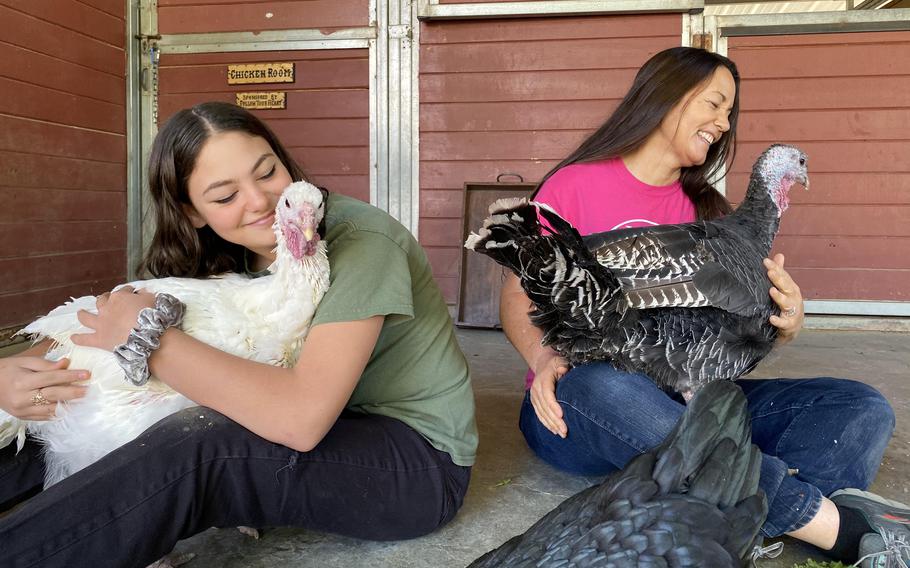 Turkeys have sharp claws, pointy beaks and red saggy bits on their necks. Snuggle might not be the first word that comes to mind when seeing a feathered turkey waddling across a farm.

But Barbara Slaine was sitting on the ground at a California farm last year when a turkey named Sun shambled over and climbed into her lap.

Slaine, 63, was visiting the Gentle Barn animal sanctuary from New York and had never had an encounter with a live turkey before.

“She nuzzled up into my chest and sort of bended into me, and I was struck by how soft she was, especially the top of her head,” she said.

“It was just the sweetest moment — I could have sat with her forever,” she said. 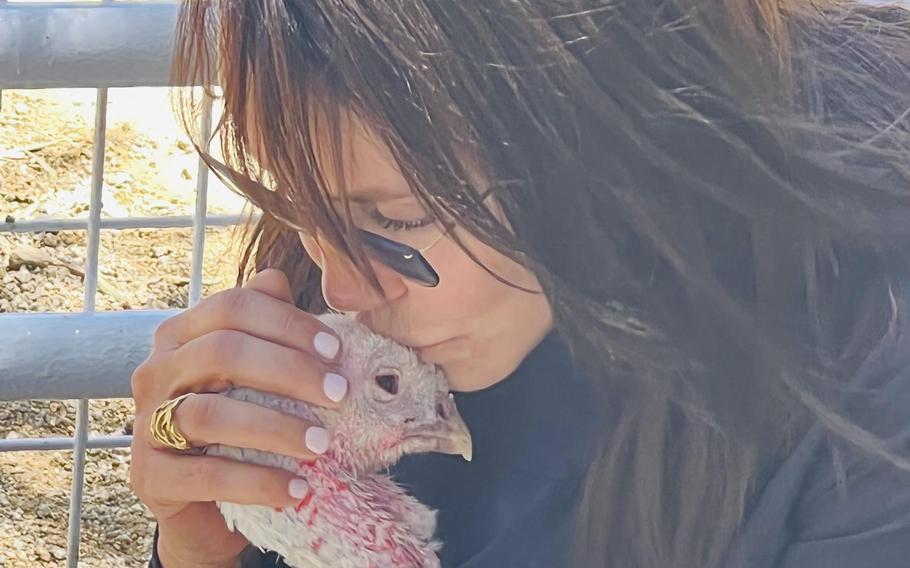 Ellie Laks sees surprised visitors like Slaine warm up to her turkeys most days of the week at her animal sanctuary in Santa Clarita near Los Angeles.

“This place was my dream since I was 7 years old,” said Laks, 54, who founded Gentle Barn 20 years ago and now has about 200 rescued cows, horses, donkeys, pigs, sheep, goats, llamas and a variety of birds, including chickens and turkeys.

Laks said she rescued her first female turkey, a sociable hen named Spring, in 2002. It was few years after she opened her barn doors to visitors.

“Every morning I would do my chores and Spring would follow me around and talk to me,” she said, explaining that by ‘talk’ she meant the turkey made small chirping noises. “One day when she talked to me for a longer time, I put down my rake and sat on the ground.”

Spring climbed into her lap and fell asleep, Laks said.

“I sat there for a good 25 minutes, and she closed her eyes and we had a good cuddle,” she said. “I was singing her little songs and telling her how beautiful she was, and it was just a special moment.”

Laks thought other people might enjoy turkey cuddling, so she put up fliers around town that year inviting anyone to come to the Gentle Barn on Thanksgiving Day to snuggle a female turkey and have a piece of pie.

“I didn’t know if anybody would show up, but we had a line of 100 people,” said Laks, who runs her sanctuary as a nonprofit and relies on donations.

She decided to make the event an annual tradition and call it the “Gentle Thanksgiving.”

“I wanted guests to walk away knowing they were sweet and kind creatures,” she said of the turkeys. 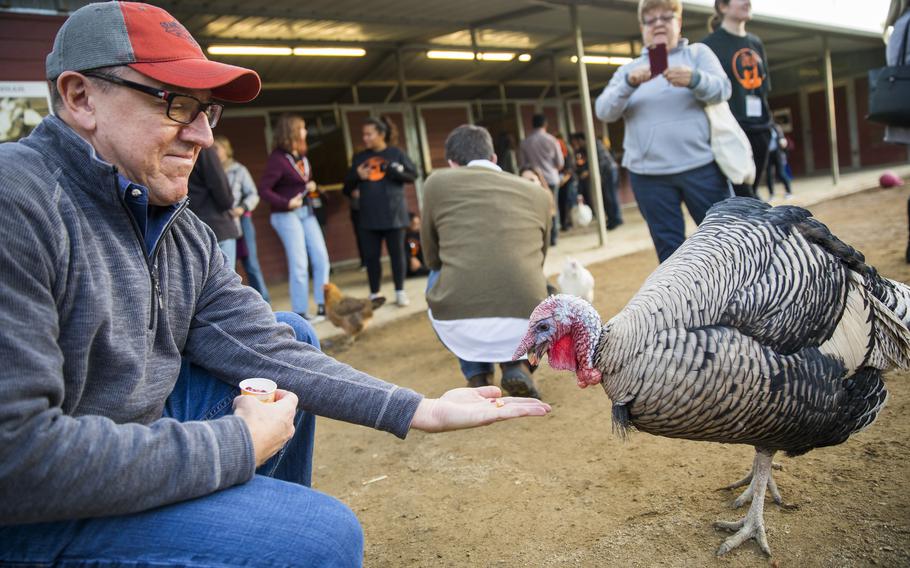 Thanksgiving Day visitors at the Gentle Barn are encouraged to feed the turkeys in addition to cuddling them. (Michelle Shiers)

For a $50 donation in California and $25 at Gentle Barn’s Missouri and Tennessee locations, visitors on Thanksgiving Day get to tour the farm, enjoy pie and hot cider, cuddle with the turkeys and feed them treats such as cranberries and grapes, Laks said.

“We’ll also be giving the turkeys pie,” she said. “Last year, they really liked apple pie. We cut it up into little pieces for them.”

Laks said she usually keeps up to a dozen turkeys at the six-acre Gentle Barn location in California that she now runs with her husband, Jay Weiner. Guests are encouraged to cuddle the birds any time, even if it’s not Thanksgiving, she said.

“Most of them were rescued, sometimes from live markets where customers buy them to take them home for eating on Thanksgiving,” she said. “Other times, we’ll work with authorities to shut down cruelty situations and bring the turkeys here.”

The majority of the turkeys are female, Laks noted, but she has also taken in a few noisy and elegant gobblers.

“My first rescue male was named Tommy, and he came from a family that had raised him for Thanksgiving dinner and they couldn’t go through with it,” she said.

“They told me he was aggressive and stupid, but I found the opposite,” Laks said. “He was a handsome and smart gentleman, and he loved posing for pictures with kids who came to visit.”

Laks said she has never had a problem with turkeys acting aggressively toward visitors at her farm, but wildlife experts generally don’t advise getting cozy with the birds, especially in the wild. 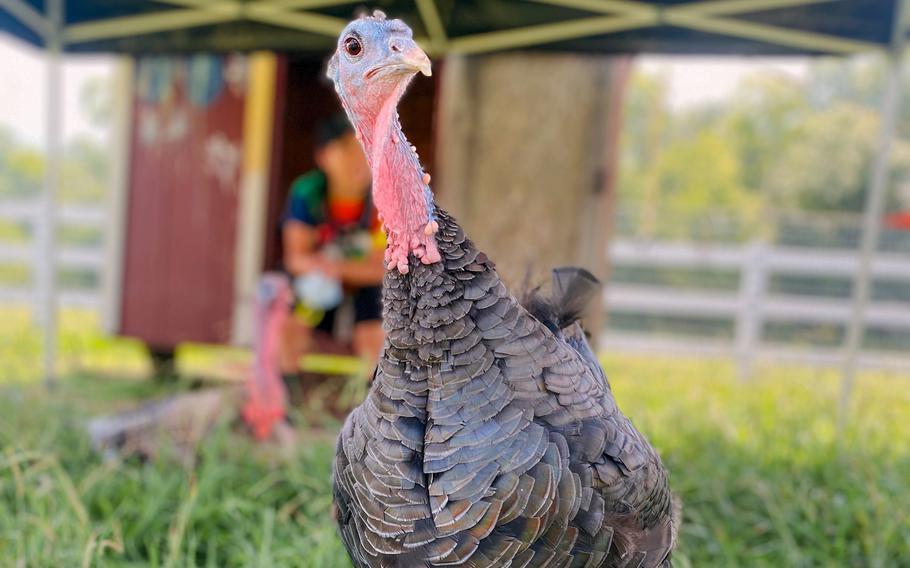 “There’s a big difference between a wild turkey and a domesticated turkey,” said Mark Hatfield, a wildlife biologist who is the director of conservation services for the National Wild Turkey Federation in Edgefield, S.C.

During breeding season, wild turkeys can be territorial and aggressive, he said, noting that “they’re wild animals and should be treated as such.”

Kevin McGowan, an ornithologist at the Cornell Lab of Ornithology in Ithaca, N.Y., said he admires and appreciates turkeys and he calls their ornate feathers “works of art.”

But he has never considered hugging one.

“My sister-in-law had turkeys, and I was followed around by one that seemed to be in love with me a number of years ago,” he said.

“I imagine that if one lets you get close enough, it might be more comfortable and tamer than most — and might let you hold it,” McGowan added. “But most are scared of people to some extent, especially if they don’t know you.”

Gentle Barn turkeys are accustomed to having people around and seem to enjoy mingling with guests of all ages, Laks said.

Slaine said that happened to her last year.

“I was known for having turkey on rye with mustard three times a week,” she said, adding that she no longer does.

Laks said she encourages anyone to come to her farm and learn more about the turkeys.

She also realizes that snuggling a turkey isn’t for everyone, so she now offers an alternative for her guests, something that became popular in the pandemic: