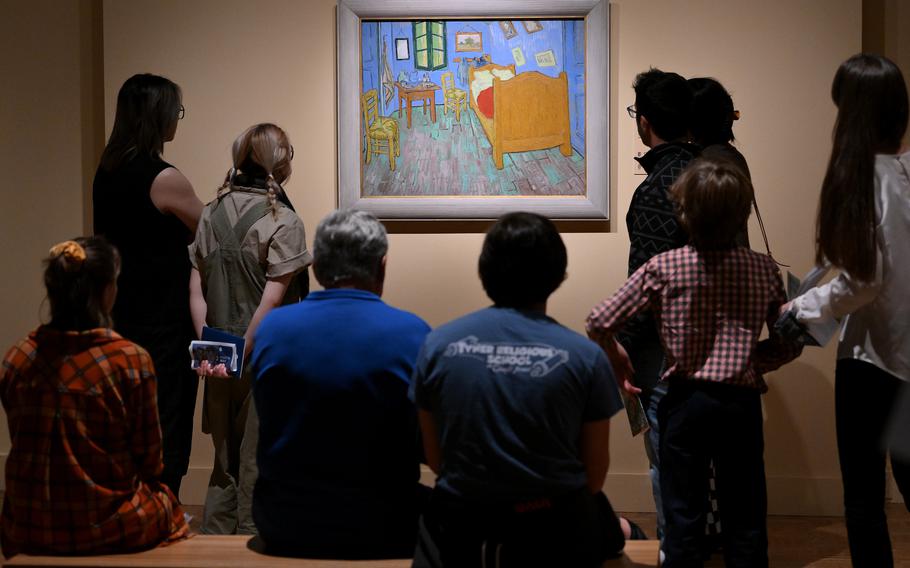 People look at “The Bedroom” at the Van Gogh exhibit at the Detroit Institute of Arts in Detroit on Oct. 2, 2022. (Robin Buckson, The Detroit News/TNS)

DETROIT — Patrons stood in awe at the recent opening of the multibillion-dollar collection "Van Gogh in America" exhibit at the Detroit Institute of Arts.

The exhibit brings together 74 of Vincent Van Gogh's most famous works from 60 locations across the globe, including Paris' famed Musée d'Orsay, Madrid's Museo Nacional Thyssen-Bornemisza and Amsterdam's Van Gogh Museum.

Mary Beth Romak of Leonard said she hasn't seen one of Van Gogh's works in person since she visited Amsterdam's Van Gogh Museum over 40 years ago.

"He's my favorite artist," she said. "The different styles (of art) and the amount is just amazing. I just want to get up close and (analyze) the brush strokes."

Cassidy Moore, 23, of Madison Heights said she was excited for the opportunity to look at Van Gogh's famous brush strokes and textured paint up close.

"My favorite I think is The (Bed)room, there's just something about it that feels so nostalgic," Moore said.

The exhibit, featured across four main galleries, runs through Jan. 22. It includes a guided audio presentation and essays written by scholars and exhibition curators.

"Van Gogh in America" explores how Van Gogh's work was received in the United States and how the DIA became the first U.S. museum to buy one of his paintings, "Self-Portrait" (1887), for its permanent collection in 1922.

Several of the works featured in the exhibit also come from museums closer to home, such as "The Bedroom," on loan from the Art Institute of Chicago.

Some are from private collectors, such as "Harvest in Provence," which Van Gogh painted in 1888, inspired by the landscape and colors of Arles, France. It's on loan to the DIA from Heather James Fine Art in Palm Desert.

Canadian resident Joanna Maruszak said she makes an effort to attend each of the DIA's special exhibits, but knowing it was Van Gogh brought her down on opening day.

"I've been sending pictures to my sister in Poland the whole time," Maruszak said. "She tells me that (Van Gogh) is the master of creating artwork out of anything, even just a room."

What: Van Gogh in America, featuring 74 authentic Van Gogh works, including paintings and drawings, from all over the world

Where: Detroit Institute of Arts