Sampling the hikes — and hops — in Bend, Ore. 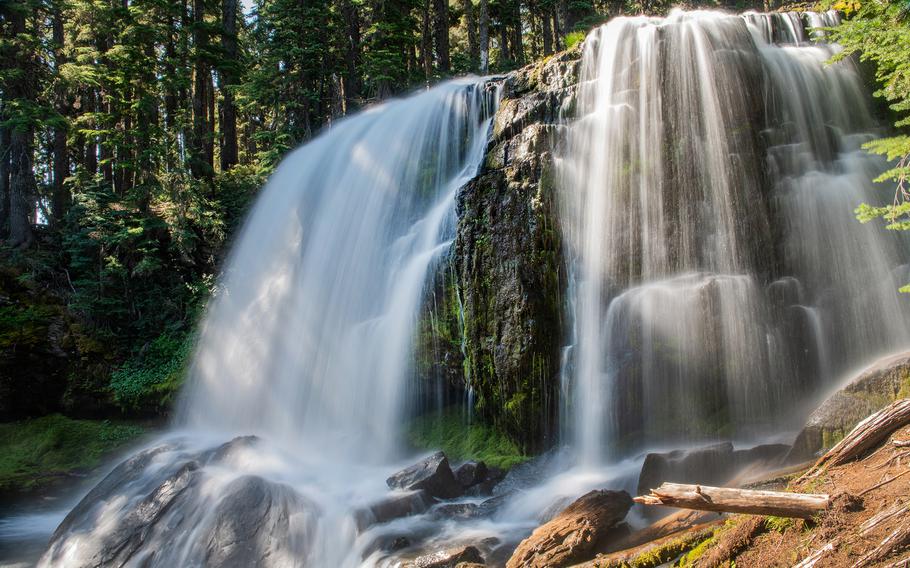 A waterfall on Tumalo Creek near the Tumalo Falls Trail. (Anna Mazurek/For The Washington Post )

The paved road turned to gravel, and the potholes increased in size and frequency as we drove toward the trailhead in late July. We parked by two other cars and changed into our hiking boots. The trail snaked upward on a steady incline through a forest of mountain hemlock and western white pine trees until the deep blue waters of Three Creek Lake below came into view. After walking roughly 2 ½ miles upward, we reached the top of Tam McArthur Rim. The wind whipped through our hair as we absorbed the view of Oregon's Central Cascades.

This hike was one of the highlights of my 10-day hiking trip to Bend, Ore. I was visiting two friends — Christy and Jools — who moved to Bend after a pandemic-inspired 18-month recreational vehicle trip around the United States. Bend is a year-round outdoor playground strategically located between the Cascade Mountains and Oregon's high desert region. Nestled along the crystal-clear Deschutes River, Bend (population 99,178) is one of only a handful of cities nationwide with a volcano inside city limits. The extinct cinder cone at Pilot Butte State Park provides a panoramic view of the region's landscape, shaped by centuries of volcanic activity and glacial carving. The 1.6-million-acre Deschutes National Forest lies to the west and south of town and boasts 212 hiking trails, adding up to more than 2,000 miles for trekking. My goal was to hike as many trails as possible and to discover why this town persuaded my friends to trade their RV for a house.

Tissue-paper-like clouds were scattered across the blue sky at Tam McArthur Rim with near-perfect visibility. The Three Sisters and Broken Top, all stratovolcanoes dotted with patches of snow and ice, dominated the skyline across the valley. More peaks — Mount Jefferson, Mount Washington, Mount Hood and Mount Adams (in Washington state) — loomed in the distance. After snapping some photos of the view, we decided to keep hiking, curious whether we could make it to the isolated No Name Lake. Scenic views from the Tam McArthur Rim Trail on the edge of the Three Sisters Wilderness near Bend, Ore. (Anna Mazurek/For The Washington Post)

The region's interconnected web of trails made it easy to customize our adventures. Combining trails for a better workout and to maximize scenery, including Alpine lakes, gushing waterfalls and mountain peaks, was a constant theme of the trip. Undeterred by a wooden "Trail Not Maintained" sign nailed to a tree, we kept walking. Each viewpoint was more stunning than the last and made me wonder why I'd even bothered to take photos at the previous one.

One mile led to another, and we reached Broken Hand, a towering, rugged outcrop where large, steep patches of ice and snow prematurely ended our hike. Before turning back, I followed another trail around the south side of Broken Hand, hoping to get a glimpse of No Name Lake. After scrambling over rocks and squeezing between a rock wall and a patch of trees, I was rewarded with a view of the lake — a blue patch of water peeking out of the valley below.

After every hike, we headed back to Bend for a celebratory beer at a brewery or two. The Bend Ale Trail, described as the largest beer trail in the West, includes 31 stops: a series of drinkable diversions (wineries, distilleries and cideries) and activities to enjoy in the surrounding area. I sampled the offerings at 14 breweries during my 10-day visit. As an India pale ale and hazy beer lover, my favorites were GoodLife Brewing Co.'s Sippy Cup hazy pale ale, Craft Kitchen and Brewery's the Juice is Loose hazy IPA, Boneyard Beer's RPM IPA and Bend Brewing Co.'s Halfway to Sanity hazy IPA. 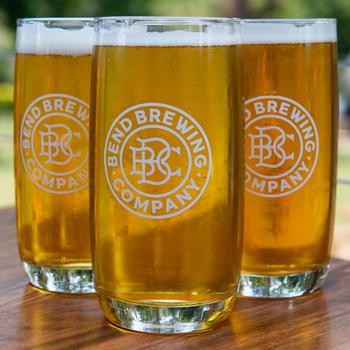 The most surprising brew was from Monkless Belgian Ales. Admittedly, I'm not a fan of most Belgian beer, but I loved the Hazy Day in Brussels, a double dry-hopped hazy tripel. It paired well with the menu's delicious communal plates that I shared with my friends: the towering Belgian frites cone, Bavarian pretzel served on a plate of homemade bier cheese and the roasted Brussels sprouts with bacon lardon, goat cheese and a balsamic reduction. Monkless, along with Bend Brewing Co., had one of the best riverfront patios in town. Another post-hike culinary treat was the Ocean Roll, a giant pastry swirled with vanilla and cardamom, from Sparrow Bakery. The pastries were so beautiful that I did a photo shoot before devouring mine in one sitting.

The most challenging aspect of my visit to Bend was the weather. I arrived the same day as a sweltering heat wave of 105-degree temperatures that thwarted my hiking plans for the first five days. To survive the heat, we focused on shorter, early-morning hikes before moving on to longer hikes when the daytime highs finally dipped into the 90s. On my first day in town, we explored the Old Mill Reach and Pioneer Reach sections of the Deschutes River Trail, a 12-mile pathway that lines both sides of the river through the historic center of Bend and extends outward to canyons and forests. People and dogs were relaxing on paddleboards, tubes and kayaks in the slow-moving current.

Three smokestacks dominate the city's skyline in the Old Mill District, a reminder of Bend's history as a timber mill haven, now transformed into a shopping, dining and entertainment complex. The smokestacks sit atop the Brooks-Scanlon Mill B powerhouse building that now houses a two-story REI store.

I explored Shevlin Park, a nearly 1,000-acre green space frequented by trail runners and dog walkers, the next morning. Christy and I followed the 6-mile Loop Trail through the old-growth ponderosa pine forest to the edges of Tumalo Creek, which flows from the neighboring Deschutes National Forest. Farther upstream is Tumalo Falls, a popular Bend hike with a 97-foot gushing waterfall a short walk from the trailhead. The parking lot was overflowing when we visited the following day. The crowds disappeared as we hiked deeper into the forest, searching for more waterfalls, discovering a handful on our 8-mile adventure. In the Newberry National Volcanic Monument, we explored the unique landscape at the Big Obsidian Flow, the youngest lava flow in Oregon, dating back about 1,300 years, located in the Newberry Caldera, along with two crater lakes. Although an easy 1-mile interpretive trail provides an up-close look, the bird's-eye view from the nearby 7,984-foot Paulina Peak offers more context to the roughly 1-square-mile site of obsidian (black glass) and pumice surrounded by lush green forest. Hiking near Bend requires some advance planning, because passes and permits are required for certain hikes.

"Within the Central Cascades Wilderness permit system, which only applies to the Three Sisters, Mount Washington and Mount Jefferson wildernesses, there are 79 trailheads," says Jean Nelson-Dean, public affairs officer for the Deschutes National Forest, noting that a new permit system was implemented in 2021. "Day-use permits are required on 19 of the 79 trails, with the goal being to maintain the wilderness character of these areas. Overnight permits are required on all 79 trails." Nelson-Dean adds that an additional $5 day-use pass or an annual Northwest Forest Pass is also required at some trailheads. Day-use and overnight permits are required between June 15 and Oct. 15. Only two of our hikes required advance permits, the trails to Moraine Lake and the Tam McArthur Rim, which we snagged a few days in advance.

On the last day of my trip, I joined Christy and friends from her women's hiking group for a secret hike with a mystery destination. We met the group in the town of Sisters and drove to the Mount Jefferson Wilderness. We followed a portion of the Pacific Crest Trail before branching off and meandering through a tree graveyard left behind by a 2003 wildfire known as the B&B Complex, which destroyed about 90,000 acres. White skeleton-like trunks, silhouetted by the cloudless blue sky, towered over a lush blanket of small trees, wildflowers and shrubs, a reminder of the region's constant threat of wildfires and the resilience of nature.

After following several smaller trails, we arrived at our destination: a pair of deserted Alpine lakes. We sat on logs by the water's edge, eating snacks and gazing at the view of the volcano looming in the distance. Even though it was Saturday, we had not passed another hiker since turning off the main trail. Despite the region's growth, it was still possible to find solitude in nature on a summer weekend.

I joined my hiking crew at a picnic table at Eurosports, a bike shop with a bar in Sisters, for a celebratory post-hike brew. Another trip to Bend was already brewing in my head as I finished my beer and reluctantly left for the airport to catch my late-afternoon flight. After hiking almost every day of my trip, I understood why Christy and Jools moved to Bend: The endless supply of craft beer and the proximity to the mountains were unbeatable.

This beloved bakery serves a tasty menu of baked goods, breakfast, and classic sandwiches and drinks. Try one of its signature Ocean Roll pastries: croissant dough filled with a mixture of vanilla, sugar and cardamom. Open daily, Monday through Friday, 8 a.m. to 4 p.m., and Saturday and Sunday, 8 a.m. to 3 p.m. Sandwiches from $11.

This Belgian-style brewery has some of the best brews and food in town, along with a scenic riverfront patio. In 2020, it won the Great American Beer Festival's award for midsize brewpub of the year. Pork schnitzel and Bavarian pretzels are a few highlights of its European-influenced menu, which pairs well with its ales. Open Monday through Thursday, 11:30 a.m. to 9 p.m.; Friday and Saturday, 11 a.m. to 10 p.m.; and Sunday, 11 a.m. to 9 p.m. Mains from $17.

This locally owned brewpub opened in 1995 and is the second oldest in the city. Snag a seat on the shaded patio or the grassy lawn lined with picnic tables along the Deschutes River. Its tasty Tropic Pines IPA pairs well with the Cajun tots. Open daily, 11 a.m. to 11 p.m. Mains from $13.

Newberry Volcano is the largest volcano in the Cascades volcanic arc and covers about 1,200 square miles. The monument was created in 1990 to protect the area around the crater and covers about 54,000 acres. Highlights include lakes, lava flows, the Lava River Cave and the 7,984-foot Paulina Peak. Don't miss the short but impressive trail through the Big Obsidian Flow, the youngest lava flow in the state, dating back about 1,300 years. A National Forest Day Pass or annual Northwest Forest Pass is required at all sites in the monument, and timed reservation tickets are required to visit the Lava River Cave. Open year-round.