In Virginia, a weekend full of 'Dirty Dancing' 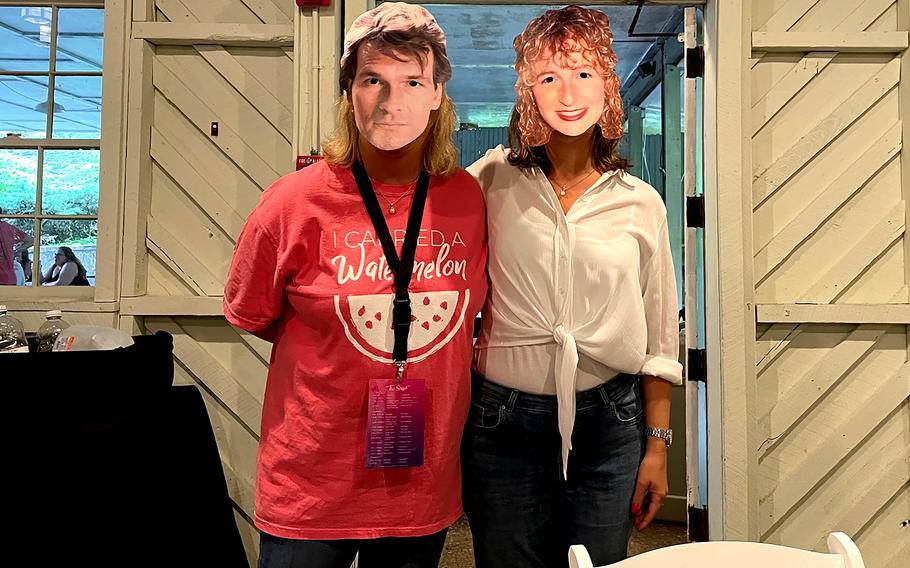 At Mountain Lake Lodge in southwestern Virginia, nobody puts any of the Babys -- or the guests dressed like their favorite "Dirty Dancing" character -- in the corner. Not Practice Baby, Watermelon Baby, Bridge Scene Baby, Didn't Do the Lift Baby, Finale Baby or Cardboard Corner Baby, a distant relative of Metaphorical Corner Baby.

"I need all of my White Top Babys," said a visitor corralling her costumed friends for a group photo by the Kellerman's Mountain House sign, the fictional summer retreat featured in the 1980s movie. "Peasant Top Babys, you're next."

During "Dirty Dancing" weekends at the resort, Baby is front and center, along with the rest of the cast who wriggled their way into the hearts and hips of millions of moviegoers. The flick was partly filmed at the 86-year-old lodge in the Blue Ridge Mountains, which, after Hollywood waved its wand, became Kellerman's in the Catskills circa 1963. (Other scenes were shot at a Boy Scouts camp in North Carolina that is no longer standing.) The sylvan property set on a 2,600-acre nature preserve has been hosting the tribute since 1988, a year after the movie's release. The themed event, held five or six times a year, sells out months in advance.

"It's an iconic movie. It brings you back to that time when you were a teenager and all those good feelings you had. Your first love, your first date, all of those fun things," said Heidi Stone, the hotel's president and chief executive. "I don't think it's going to go away anytime soon. The love is just continuing down the generations." 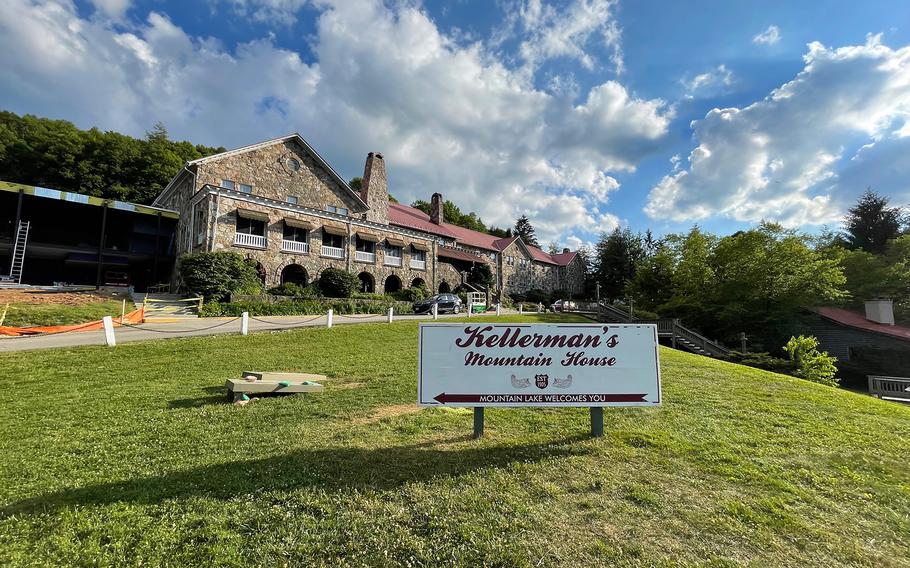 To prepare for the weekend, Heidi recommends screening the film in advance and paying particular attention to the settings: the arrival area outside the main lodge, the Houseman family's cabin and the entrance to the staff quarters, where the watermelon entered the picture.

"Watch the movie before you come, so that when you drive up, you are like, 'Oh my word! It's really Kellerman's,' " Heidi said from a table at Harvest, the restaurant where the Housemans dined and discussed deep issues. (It was the '60s, after all.)

The movie studio altered little of the resort that Texan businessman William Lewis Moody built in 1936 as a cool mountain escape for overheated city dwellers. It added a few flourishes, such as striped awnings on Harvest's windows and white bollards with chains trimming the driveway. The filmmakers, however, did not fill the lake: The body of water was swimmable in the 1980s but dried up more than two decades later. (The lake's level ebbs and flows; in 2020, it was two-thirds full, the highest point since 2008.)

When I pulled up to the stately sandstone lodge, I idled the engine, hoping the specter of Max Kellerman would materialize. It didn't. So I drove to the back of the building, accidentally re-enacting the scene in which Johnny, after breaking into his own car, steers his Chevrolet Bel Air the wrong way down the driveway. Clearly, Patrick Swayze was my co-pilot.

Mountain Lake Lodge offers a range of accommodations, including rooms in the main lodge and cabins named by the families who built and owned the getaways before deeding them back to the property. On any other day of the week, a room is just room. But on this weekend, the Virginia Cottage was a celebrity in its own right: The three-bedroom with the green roof and wraparound porch was Baby's Cabin. Room 232 also has a "Dirty Dancing" connection: Swayze slept here during filming. Scanning a printout of the hotel registry from Sept. 1, 1986, I noticed the name of another famous guest bunking on the same floor: Cynthia Rhodes, the Penny to Swayze's Johnny.

Before dinner, I dropped by the bar, where a pair of older gents with a small dog knew their audience. They hollered over to me, "Google He-Man and Skeletor dancing." I watched the advertisement spoofing the film's finale while draining a glass of Lisa's Strawberry Lemonade, which was spiked with vodka. At Harvest, the host led me to the most coveted table in the dining room. Behind my shoulder, a sign on a pillar showed a photo of the Housemans sitting at the same four-top and noted that the sconces, stone interior and tables were unchanged from 35 years ago. Chef Michael Porterfield deserved a plaque, as well, and not just for feeding upward of 300 diners a night. The word around the resort was that he gave Swayze a ride on the back of his motorcycle.

I had to chew fast to make the evening costume contest, which explained the inordinate number of petal-pink dresses, cutoff jean shorts and watermelon accessories at dinner. "I need any supporting cast members, including watermelons. Lisa, where are you?" called out Debbi Sheldon Richey, the dance instructor who was performing judging duties. "I need everyone except Baby and Johnny." (Lisa was Baby's older sister.)

Debbi approached each contestant with a simple question: "Who - or what - are you?" "We're the Schumachers. We have some wallets," said a couple dressed as the elderly kleptomaniacs. "I'm the corner," said an angle. "I'm the watermelon, and I came all the way from Scotland," said the trans-Atlantic fruit. There were several Pennys in leotards and tights, a Lunchtime Lisa and more Schumachers, including the winner: the mother of Finale Baby, a guest from San Francisco who was celebrating her 40th birthday with her own cast of nearly three dozen friends and family members.

For the Baby division, every outfit and scene was represented, including Baby dressed as a baby. (The prequel?) Debbi declared Magic Show Baby, who was carrying a stuffed chicken prop, the victor. "In my 16, 17 years of judging, this is the first time I've seen the chicken," Debbi said after the pageant. I asked about her most memorable Baby. "The mom was the corner and the daughter was the pouty daughter," she said, still amazed at the young girl's thespian skills, assuming she was acting.

Though the event clearly attracted more women than men, we had enough Johnnys to make a quorum. "What truly made Johnny was the dancing," said Debbi, upping the competitive bar. 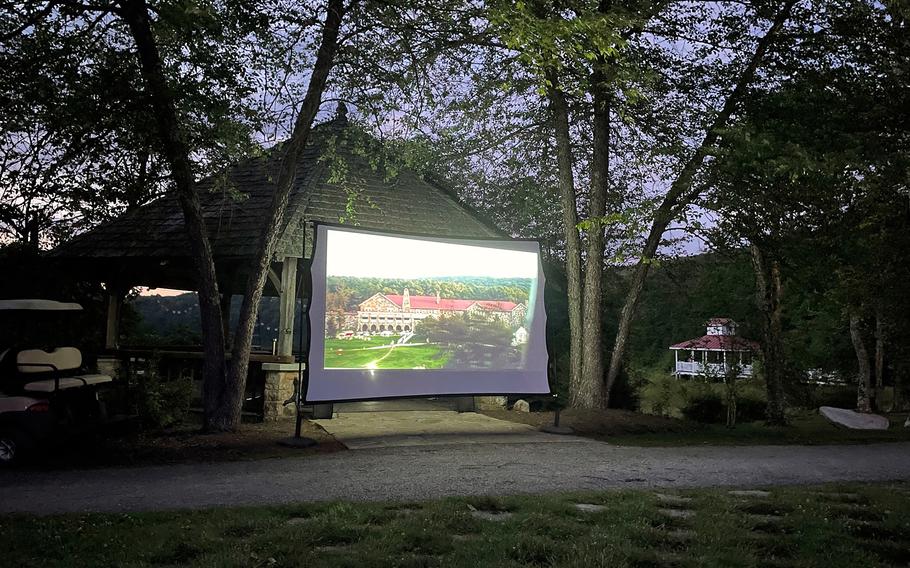 On the first night of a “Dirty Dancing” weekend, the Mountain Lake Lodge screened the movie that was partly filmed on its property. (Andrea Sachs/The Washington Post)

An outdoor screening of the movie followed. But before the lights went down, I introduced myself to Baby who carried a watermelon from England (Lucy Fellows) and her mother, 50th birthday Baby (Louise). I thanked Louise for the vegan birthday cake, a slice of which the waitress had served me. The next day, I joined their family in the Grand Ballroom for trivia. In between questions -- "Which 'Seinfeld' actor played Stan?" "What was Baby going to do after college?" "What was the first song Baby and Johnny danced to?" -- I asked Louise how she had heard about Mountain Lake Lodge.

On the game show, Louise told me, the host had asked the contestant how she planned to spend her winnings. She said she was going to a "Dirty Dancing" weekend in Virginia. Months later, they packed up their stuffed watermelon and flew to North America. During trivia, I noticed that Louise and Lucy were answering most of the questions. "Martin, are you a fan of the movie?" I loud-whispered to Louise's husband.

"As a bloke, I'm not really interested in it, but I appreciate it," he replied. "I am more of a 'Pretty Woman' guy."

We joined forces and tackled the eight challenges together, taking a mint from the place where Baby's father said his daughter was going to change the world (Harvest's hostess stand) and bunny-hopping on the springy green lawn. Martin gamely played all of the male roles.

"I'm sorry I lied to you, but you lied, too," Lucy said to her pretend father, Jake Houseman, imaginary tears streaking down her cheeks. Fake Jake rubbed his eyes. 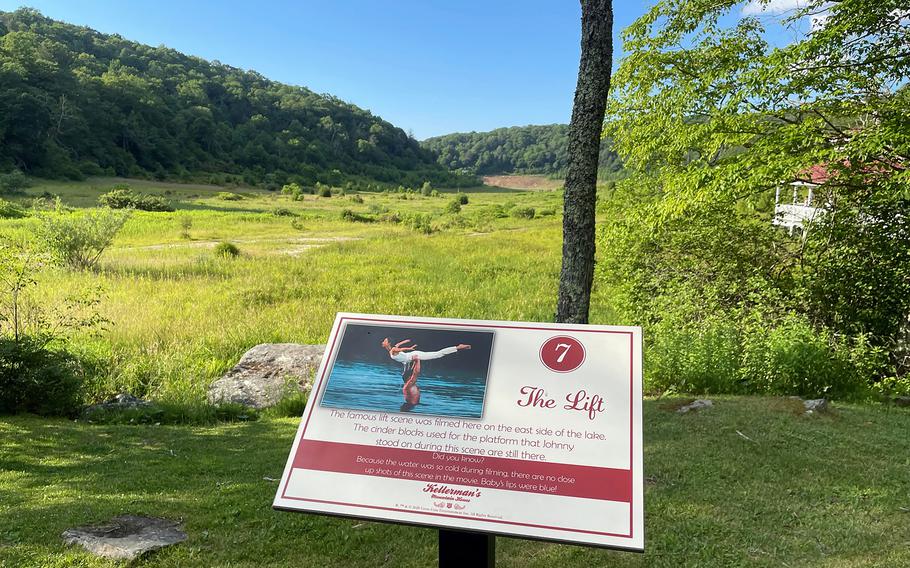 Signs around the lodge in Pembroke, Va., designate “Dirty Dancing” film sites, such as where Baby and Johnny practiced their lift. (Andrea Sachs/The Washington Post)

In the lake, we tromped through the overgrowth to find the cinder blocks Swayze had used as a pedestal during the practice lift scene. Louise raised her arms like Superman poised to take flight while Martin crouched down and feigned an attempt to raise his wife by her hips. No knees popped, nor did any lips turn a shade of hypothermia. "Because the water was so cold during filming, there are no close up shots of this scene in the movie," a plaque stated. "Baby's lips were blue!"

At the afternoon dance lesson, Debbi made an important announcement, probably crafted by a team of lawyers: "We do not do lifts." Instead, we learned several flightless dances, including the merengue, solo salsa and swing. "Hitchhike, hitchhike, hitchhike, toe, heel, flick, step, right, rock, recover, step, hold," Debbi directed. "Now do that twice."

I had my moves down for the evening dance party. However, a torrential downpour threatened to cancel the fete. I was chatting with Dennis Williams, a dance instructor, in the lobby when he was pulled away to test the water levels of the dance floor. The outdoor nightclub was deemed safe and, after dinner, guests started trickling in.

The dance felt a bit like a prom attended only by the wallflowers and parent chaperones, but then the 40th birthday celebrants arrived and blew life into the party. A cardboard cutout of a diminutive Johnny showed up. He slow-danced with a few guests and crowd-surfed several times. When the DJ played the movie's final song, Johnny was kicked to the sidelines and we all jumped into place on the dance floor. Many of us had been training for this moment, this time of our life, for 35 years.