The little-known Boston Harbor Islands have a lot to offer 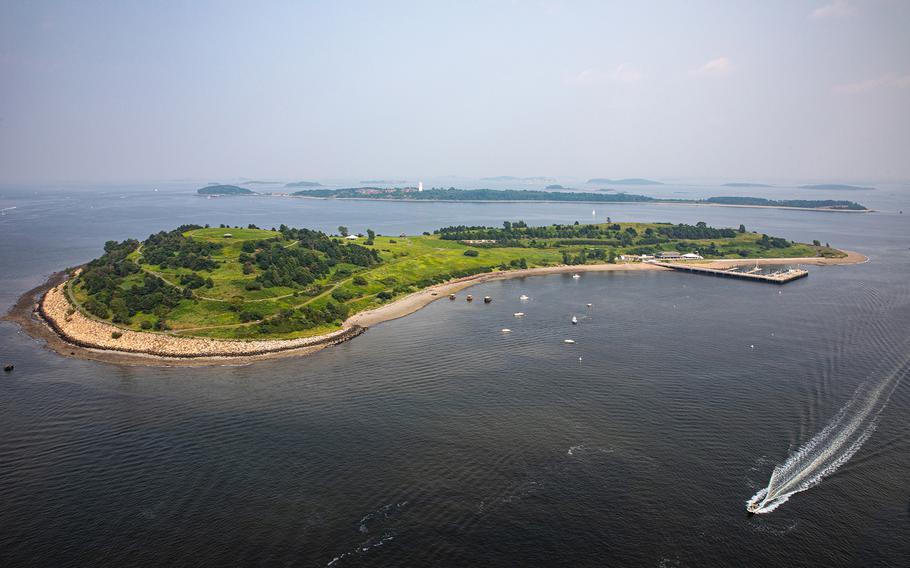 When I, a native New Yorker, suggested to my husband, a born-and-bred Bostonian, that we take the kids on a day trip to the Boston Harbor Islands, he told me in his rich accent that he'd "nevah heahd" of them. That was 10 years ago, when our kids were ages 7 (twins) and 4, and since then, our family has made almost yearly visits to these little-known yet fascinating islands.

"I have always blamed that [lack of awareness] on the topography of our city," said Kathy Abbott, president and CEO of Boston Harbor Now. "Unless you're lucky enough to be working in one of the high-rise buildings on the southeast corner" of the city, you don't see the islands.

The Boston Harbor Islands consist of 34 islands and peninsulas, seven of them usually accessible by two three-deck passenger public ferries that make several rounds a day. You can purchase a ferry ticket (online or at the terminals in Boston or Hingham) that allows you to hop on and off as much as you like for one day. Because of the pandemic, the ferry schedule has been modified this year, and they stop only at Spectacle, Georges, Peddocks and Thompson islands - three times a day at Spectacle and Georges, six times a day at Peddocks, and once a day at Thompson. (If you have a private boat or kayak, there are public moorings available at Peddocks, Spectacle, Georges and Gallops islands.) You can hike, swim, attend special events and experience history on the islands; four of them - Bumpkin, Grape, Lovells and Peddocks - have campgrounds. (Only Peddocks is open for camping.)

This year, the Boston Harbor Islands National and State Park is celebrating its 25th anniversary as a national park and 50th anniversary as a state park. It awarded grants to 12 nonprofits to create meaningful events for the community; you can check the calendar at bostonharborislands.org/calendar before visiting.

Each island has its own personality. "Every one of them has a different story and a different feel," Abbott said. Three of our family of five's favorite islands are Bumpkin, Georges and Peddocks, because these islands enable us to have an adventure, explore history and have a spooky experience. Before we visit the islands, I always double-check the schedule at each stop to avoid getting stranded. Before the pandemic, we could visit three islands in one day.

Bumpkin Island is small but has a rustic and adventurous feel. Instead of taking the ferry, some people kayak there from the nearby town of Hull. We appreciate the crowd-free, serene setting. When we visit, we bring either breakfast or lunch and have a peaceful picnic at one of the tables there. We love the matted-grass trails that are wide and enable us to easily stroll by the staghorn sumac shrubs and successional trees. Butterflies usually fly around us as we follow the wildflower-dotted path around the island. At the highest point of 70 feet elevation, we can always see the skyline of Boston, about 10 miles from Bumpkin.

When we visit, we always go to the island's main attraction, the remains of a stone house, and pose for a picture underneath the archway. According to the self-guided pamphlet provided by a park ranger at the entrance, the structure dates to the early 19th century. After its use as a house, it became a heating plant for a children's hospital. There are remnants nearby of the hospital, which was leased by a local philanthropist from Harvard University for children who had severe physical disabilities. During World War I, the U.S. Navy used the hospital as a training station, abandoning it at the end of the war. It reopened briefly in the 1940s and later burned down.

Georges and Spectacle are the two most popular islands among tourists and Bostonians. We always take the ferry from Hingham, which is closer to Georges, so we usually visit that island. But one time we did make the longer trek to Spectacle to check it out. Spectacle is only about 30 minutes by ferry from downtown Boston, and visitors can appreciate the beach and five miles of trails with views of the Boston skyline. Every Sunday in July and August, Spectacle hosts bands for the "Jazz on the Porch" series, held at the visitors center. "You can spend an afternoon sitting in the Adirondack chairs on the porch on Sundays and listen to live jazz," Abbott said.

However, if you go to Georges Island, "then you have a day of history," Abbott said. The main attraction here is Fort Warren, which held Confederate prisoners and was a training facility. She cited Fort Warren's importance as a military installation that was actively engaged in the Civil War.

When we visit Georges, we try to allow at least two hours on the island, so we have time to explore the prison cells, cannons and lookout tower. Even though we are familiar with the story, we enjoy reading about the Lady in Black, the ghost of Melanie Lanier, who tried to free her imprisoned Confederate husband but was caught and killed, and is said to haunt the fort. The dark tunnels in the enormous stone buildings of the fort always give us a creepy and haunting vibe, but the kids love it.

Peddocks Island is celebrated for its biodiversity. The habitats on Peddocks include closed canopy forests, woodlands, shrub thickets, old fields, salt marsh and a brackish pond, and we enjoy walking around and noticing as the habitats change. The island supports about 220 plant species, including more than 100 each of native and exotic species.

Being in the middle of the Boston Harbor Islands, Peddocks also is a crossroads for many of the animal species that use the islands, such as deer and coyote that swim between the mainland and other islands. Birds that use the island as a stopover include the American oystercatcher, for which the Boston Harbor Islands are one of their northernmost breeding sites, and the islands host several colonial nesting species, such as the least tern. More than 2,000 species of insects and terrestrial invertebrates have been documented across the islands, as well as 451 intertidal and marine species, and more than 200 bird species.

The most famous aspect of this island is that some scenes of the 2010 movie thriller "Shutter Island" were filmed there. Look for Peddocks in the movie's opening scene. The author of the book that inspired the movie, Dennis Lehane, based the novel on his childhood visits to Long Island, a Boston Harbor Island that is now restricted from visitors.

When we visit, we explore the fort and scenic hiking trails. The boarded-up structures and overgrown vegetation give the spooky impression that Martin Scorsese was probably hoping for in the movie.

Abbott said that when tourists come to Boston, she hopes they'll think of the islands as well as the Red Sox, Fenway Park and the Freedom Trail.

"Our vision is for a vibrant, welcoming, resilient harbor that benefits everyone," Abbott said. 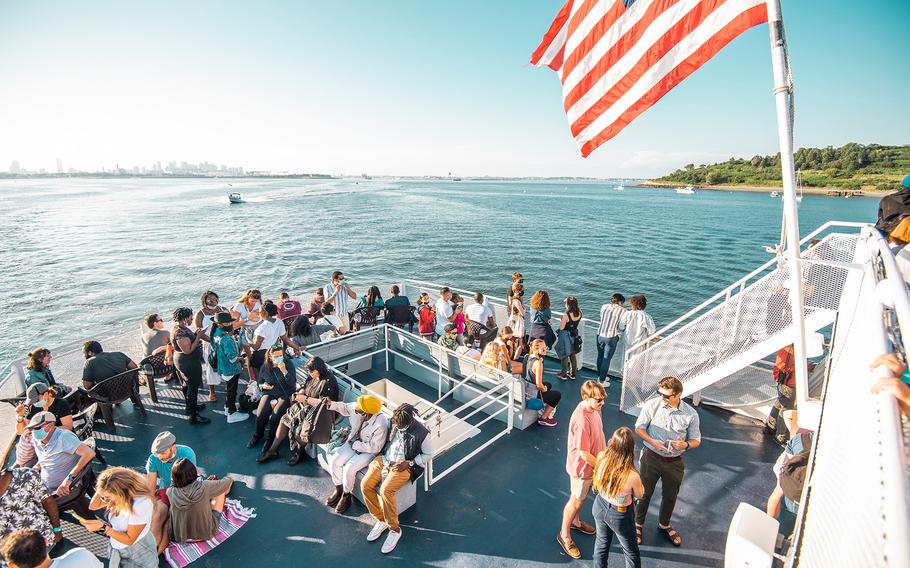 Get to the Boston Harbor Islands from ferry terminals in Boston (66 Long Wharf) and Hingham (28 Shipyard Dr.). Costs $24.95 per adult; $17.95 per child; $22.95 for seniors, students and military; and free for children under 3. Visit bit.ly/boston-islands-ferry for schedules.

Camping is available Thursday, Friday and Saturday nights through Labor Day weekend. Bring your own tent and camp overnight or rent a yurt. Advance reservations required. Campsite fees at Boston Harbor Islands are $8 for Massachusetts residents, $20 nonresidents; yurts $55 for residents, $140 nonresidents. There is also a $4.50 reservation charge.

"Be a Junior Ranger" program

Before your trip, download a booklet with activities for children to complete to become a junior ranger. Once there, rangers also lead programs, which include guided tours, arts and crafts, and more. Free.

"Jazz on the Porch"

This series is held on Spectacle Island and runs on Sundays in July and August. Free. The other islands also host events, which can be found at bostonharborislands.org/calendar.

People can volunteer to maintain island trails and habitat areas, or to welcome visitors and answer questions. Check website for opportunities.