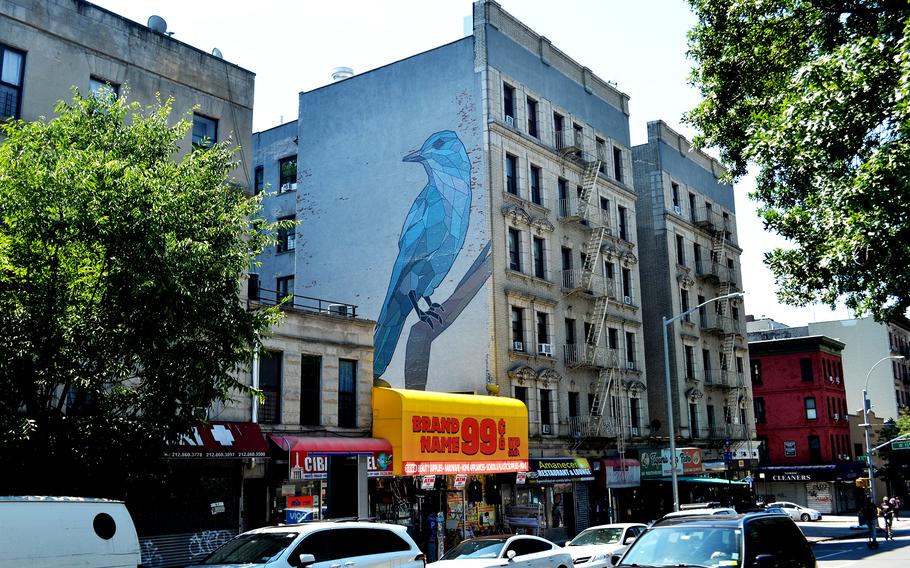 Two warblers peeped over the scaffolding. Our guide pointed out the vibrant orange coat and black crown of the Blackburnian warbler and the gold neck and white "eyebrows" of the yellow-throated warbler.

The warblers weren't in trees, though. They were in murals.

Viewing bird murals in Manhattan is not entirely dissimilar from birding: You never know exactly what you'll find. A mural could be hidden by scaffolding, or a new one may suddenly appear, or one you expect to see may be gone.

My wife, Carol, and I experienced all the joys, discoveries and challenges of birding on our walking tour of the Audubon Mural Project in Hamilton Heights and Washington Heights, vibrant New York neighborhoods of low-rise apartment buildings, corner produce markets, street vendors and people enjoying a sunny Sunday morning. On the streets, car horns and roaring engines mixed with the sounds of lively music.

"Birds are like the proverbial canaries in a coal mine," said Jennifer Bogo, the National Audubon Society's vice president of content. "While many animals and also people will suffer from the impacts of climate change, birds will be among the first to show it."

At this writing, 102 murals depicting 140 species were on view: Some are massive and painted on the sides of buildings, some are spray-painted onto security screens, and others pop up in unexpected corners. And all of them appear in the neighborhood where John James Audubon spent the last 10 years of his life.

Our group of 12, most of them in the city for the day, met at 10 a.m. at Chipped Cup Coffee & Victuals in Hamilton Heights and were greeted by our guide, Leigh Hallingby, who offers tours of the mural project.

Leigh said all the murals we would see that day were of birds threatened by loss of range, depletion of food sources, or habitat loss due to climate change. The walk would take us up Broadway from West 148th Street, crossing over to Amsterdam Avenue, then back to Broadway. We ended at West 164th Street east of Broadway. In all, the tour took a little over two hours.

One of our first stops was at a pediatric clinic at 3612 Broadway, where Australian artist Jacinta Stewart's mural celebrates baby birds. On the front wall, a pair of Bullock's orioles feed three chicks, and a red-breasted sapsucker feeds two. In a corner, an American three-toed woodpecker sits in a tree.

As the group admired this mural, Leigh looked over her shoulder and gave a shout: a new bird mural sighting across Broadway. "'I literally have never seen it before," she said with delight. "It's always exciting to see a new mural go up." But more on that later.

On the corner of West 149th Street and Amsterdam Avenue, an enormous grosbeak emerges above the treetops on the wall of an old movie theater, now a church. This evening grosbeak sits perched on a cherry tree, the branches of which spread along the wall facing 149th Street. A black-headed grosbeak appears on the back wall of the building.

Ouizi's mural was a favorite of tour member Abigail Rosen. "I love cherry trees and liked that it is so huge, and the cherry tree is extending all the way to the corner [of Amsterdam Avenue]," she said.

The muralists' styles vary as much as the birds themselves. Heading back toward Broadway, we came upon a giant mural on the side of an apartment building featuring male and female hooded warblers perched on a bird's-foot violet plant. The mural - by artist Gera Lozano, also known as Geraluz - is styled like a page from a volume of Audubon's paintings, complete with title and identifying numbers.

We made our way back to Broadway and West 149th, where Leigh had made her discovery earlier. Two new barn swallow murals by Harlem artist Marthalicia Matarrita had replaced ones badly damaged by graffiti. 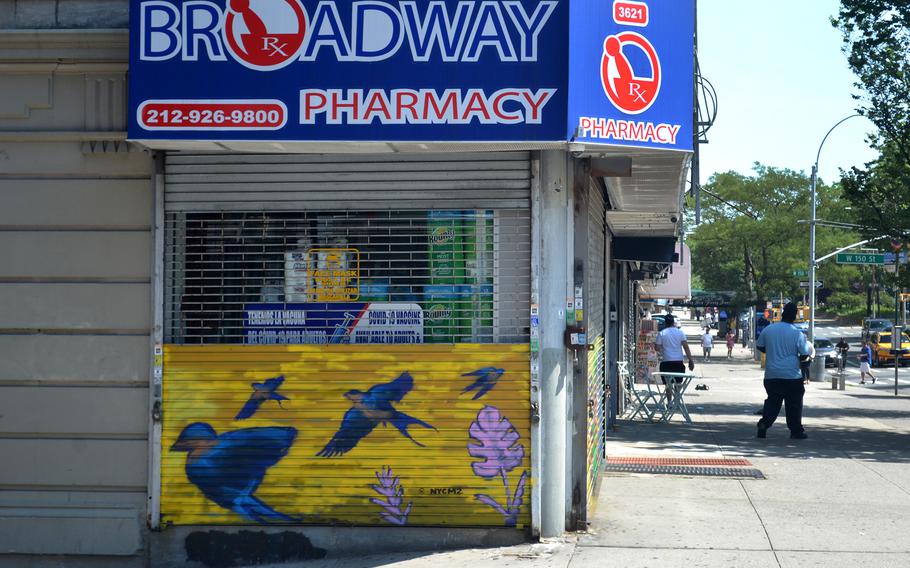 Leigh told the group that, to some, the murals represent an unwelcome change in the neighborhood, whereas others applaud the attention they generate. "The urban dynamics of doing the project in a city of vast income inequality is complicated," she said.

Nearby, another mural by Matarrita, this time painted on a security screen, celebrates an unpopular bird: the black vulture. The bird plays an essential role in the environment, as the artist notes in the mural, "Bird That is Often Misunderstood."

As the walk progressed, I found that I could identify artists by their style. One is Snoeman, whose whimsical and vibrant murals appear throughout the neighborhood. A few doors down from the vulture, we came to a whiskered screech owl, a gray owl with large yellow eyes spray-painted on a black security screen. More yellow eyes surround the bird, and beneath it are the words, "Have a Nice Night."

My favorite mural was on the wall of an apartment building on the east side of Broadway between West 151st and West 152nd streets, a huge blue pinyon jay perched on a pinyon pine that was visible from the tree-lined median strip dividing Broadway. The artist, Mary Lacy of Vermont, painted the bird in mosaic-like patterns.

At 575 W. 155th St., my jaw dropped when I saw the gigantic mural of a swallow-tailed kite by artist Lunar New Year covering the side of a five-story apartment building. Its brilliant white head stands out starkly against the dark backdrop of the building, and it clutches a garter snake in its claws. Embedded within its body and wings are 12 other endangered birds, creating a dazzling montage. Across the street in the Trinity Church Cemetery, we paid our respects at Audubon's grave. This tree-filled quiet respite offered a break from the noise of the city. His monument, a Celtic cross, is appropriately carved with the images of birds.

Walking northward toward Washington Heights, we came upon another Snoeman mural, of a bird that I was surprised to find faced loss of habitat: the seemingly ubiquitous Canada goose. The cool goose - he's wearing bright yellow sneakers, a Yankees cap and a necklace reading "Too Fly" - stands out against a red-and-white background on a security gate in front of a former shoe store.

On West 163rd Street west of Broadway, Guatemalan artist Juan Carlos Pinto and Brooklyn artist John Sear have created a mosaic of trumpeter swans using recycled glass, mirrors, tiles, porcelain and other materials. The swirl of whites, yellows, reds and blues evoke movement and flight. Leigh pointed out details such as shards of willow ware and a snaking row of dominoes embedded in the sky. "There's so much going on here," Carol said. 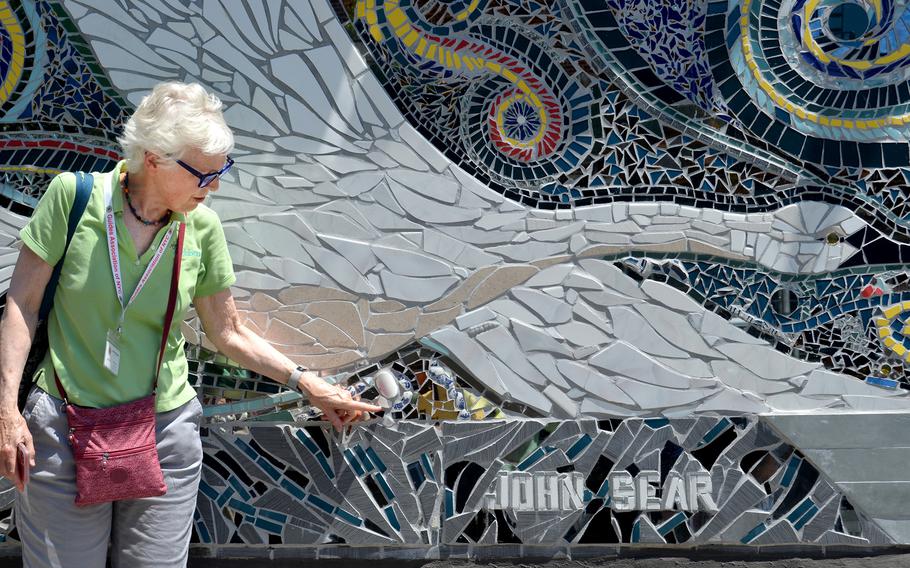 Walking-tour guide Leigh Hallingby points out details on a mosaic of trumpeter swans by Carlos Pintos and John Sear on West 163rd Street in Manhattan on June 26, 2022. (James F. Lee/For The Washington Post)

After coming back from near extinction, trumpeter swans face drastic habitat loss from climate change. We saw a sign of hope painted on a security screen at 3898 Broadway, where a mural by James Alicea, a.k.a. BlusterOne, depicted a blue-headed vireo and two northern parulas. "Every Little Thing Gonna Be Alright," it reads, invoking the Bob Marley lyric from the song "Three Little Birds."

Painted by artist BlusterOne, this mural at 3898 Broadway in Manhattan, seen on June 26, 2022, was inspired by the Bob Marley song “Three Little Birds.” (James F. Lee/For The Washington Post)

Over the past eight years, the mural project has grown beyond expectation, extending now to Vashon Island, Wash., and Rockford, Ill. Project co-producer Avi Gitler has come a long way, too.

"I don't look at birds the same way I did before," Gitler said.

Nor do I. I thought of the diversity and sheer beauty of the birds we saw, and the talent of the artists. Our planet would be barren without them.

Audubon Mural Project tours are typically offered one Sunday a month, from 10 a.m. to 12:15 p.m. The tour passes through an urban neighborhood over flat terrain. Expect to see about 30 murals. Limited to 20 people. Costs $30, or $20 for NYC Audubon members. Check nycaudubon.org for details and to register.