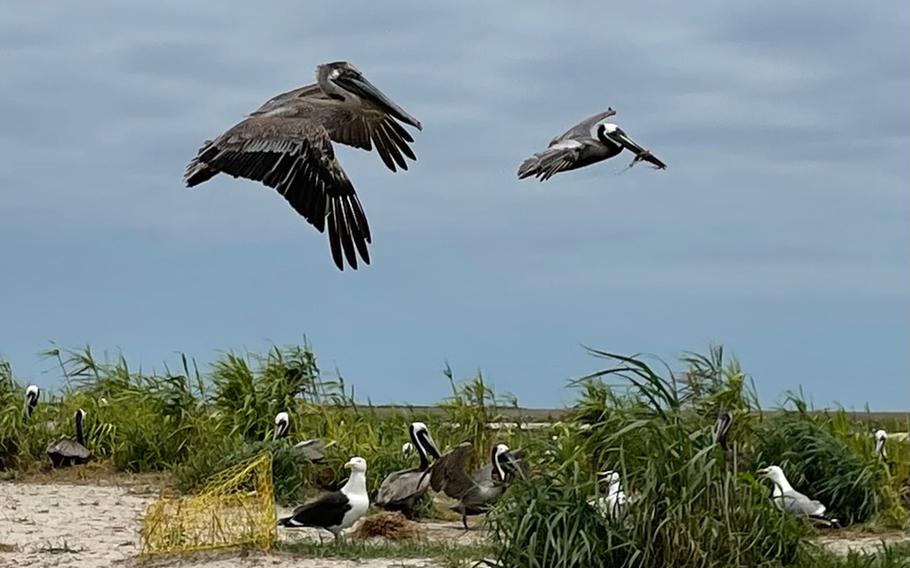 On a sunny mid-June afternoon with a tickling breeze, dozens of brown pelicans soared overhead like an avian Cirque du Soleil. Some birds carried nesting material in their comically long bills; others scanned the light chop for a meal. On shore, expectant parents tended to their eggs, standing as still as statues. While the performers swirled around him, Wes Bradshaw remembered a time when there were no pelicans on the Chesapeake Bay, a period that covered about three-quarters of the waterman's life on Smith Island, Md.

"I had seen pictures of them, but I didn't see my first one till 24, 25 years ago," the 77-year-old retired crabber said from inside the skiff he uses to transport guests to the island's pelican rookery. "Now, I enjoy looking for them and seeing what they're up to."

The arrival of nesting East Coast brown pelicans on the Chesapeake Bay, the northernmost point in their spring migration, is an uplifting chapter in the often bleak tale of climate change and declining wildlife diversity. Though pelicans - and their deep throat pouches - have existed for at least 30 million years, they do not appear in the Eastern Shore's historical records. Neither the region's Native Americans nor English explorer John Smith, who mapped out the waterway in 1608, mention the prehistoric-looking bird.

"It's a recent thing," said Jim Rapp, an avid birder and conservationist who leads pelican tours on Smith Island with Delmarva Birding Weekends. "In 20 years, this place could look like Florida, bird-wise." 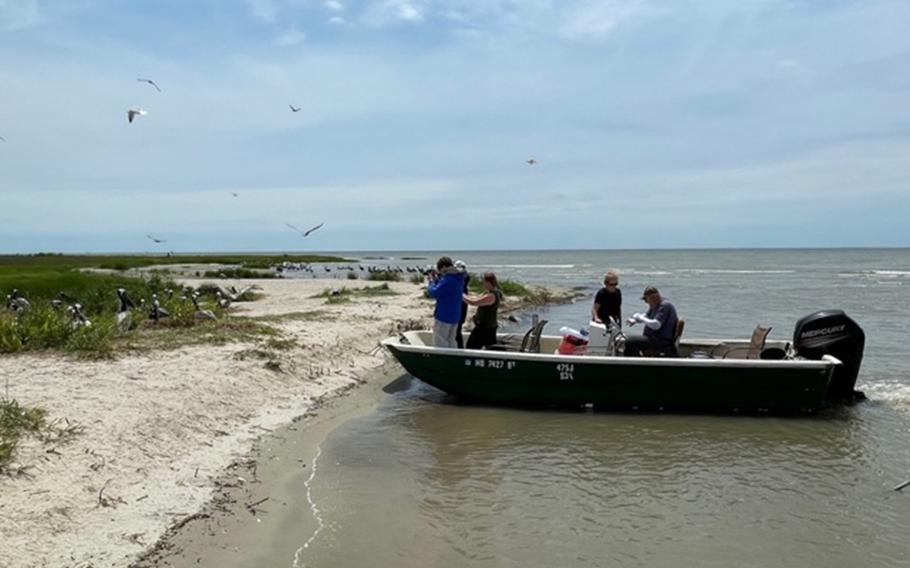 Previously, brown pelicans, like many Washingtonians, summered on North Carolina's Outer Banks. However, Jim said disruptive storms may have forced the birds to relocate their breeding grounds about 130 miles up the East Coast. Nesting brown pelicans, the smallest of the eight species, were first documented on Chincoteague Bay, near Assateague Island, in 1987. Since then, the once-endangered birds (DDT, the toxic insecticide banned in 1972, was a culprit) have formed robust colonies in the central and lower sections of the bay. Their numbers have rocketed, from about 60 pairs in the early 1990s to more than 2,500 couples today.

"There's no better real estate on the Chesapeake than on this estuary. There are no land predators and loads of fish," said Jim, who once assisted scientists in banding 1,600 pelicans in an afternoon. "The Chesapeake has become a pelican factory."

During winters down south, brown pelicans have as many responsibilities as Florida spring-breakers. However, for their roughly six months in the Mid-Atlantic, the birds are all business: mating, building nests, laying and incubating eggs, teaching their offspring life skills, securing the future of their species. The bulk of these activities take place in rookeries that are often inaccessible to the flightless or boatless.

On Smith Island, resident watermen such as Wes will scoot visitors over to the colonies during high tide, when their vessels can inch close to the action. Delmarva Birding also organizes day-long excursions during peak weeks. The fee covers all water transportation, including the round-trip ride from Crisfield, Md., to Smith Island, plus a crab-cake lunch with a slice of pinstriped Smith Island cake, Maryland's official dessert. 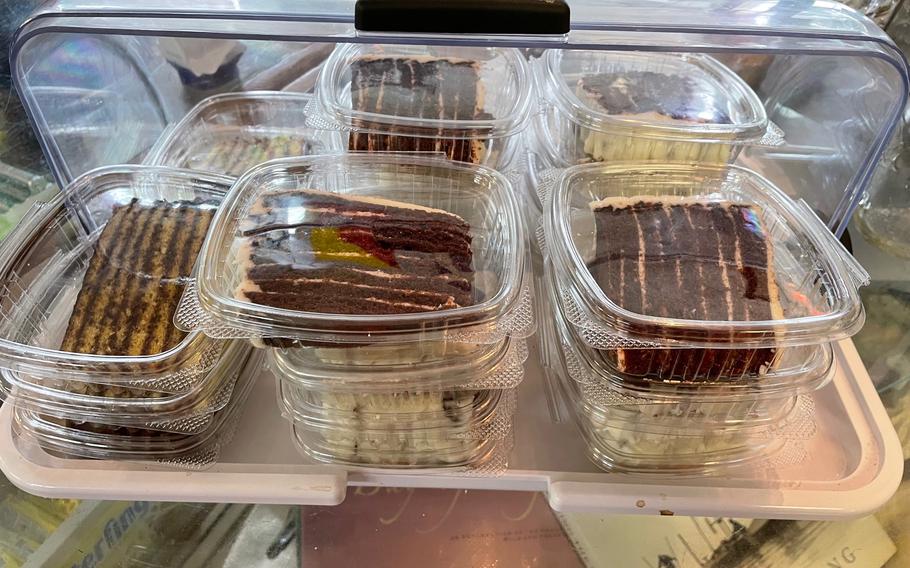 On a Thursday morning with ponderous clouds and rumbling thunder, our group boarded the Barbara Ann II from Crisfield. Captain John Asanovich was at the helm, and his first mate, Barry Chew, was everywhere else, zipping the plastic flaps when the rain started to fall, wiping off the wet seats when the sun peeked out and chasing a fly that had hitched a ride to the island. Our group's primary motive was to see the brown pelicans, but we still jumped up - or at least cocked our heads - whenever Jim pointed out a flying object.

"There's a glossy ibis," he exclaimed, followed by a tricolored heron, a night heron, another glossy ibis, a snowy egret, two bald eagles, an osprey and a great black-backed gull, the largest member of the gull family. "Pelican behind us!" Jim called out excitedly.

I came late to the party - I was deep in the Audubon Bird Guide app trying to learn the difference between egrets and herons - but looked up in time to see a little splash marking the pelican's entrance to the live fish market. Seconds later, it burst through the waves, a winged jester among graceful acrobats. "They have a massive beak and a slow wing beat," Jim said, "but they turn into a torpedo in the water."

The pelican sightings became more frequent as we neared Ewell, the largest of Smith Island's three villages. The Barbara Ann chugged past a jetty heavily occupied by pelicans standing around like teens outside a Starbucks. Jim explained that these birds were juveniles, too young to start their own families but too old to pal around with their parents. "They're just hanging out," he said, "or learning adult skills, like nest building." 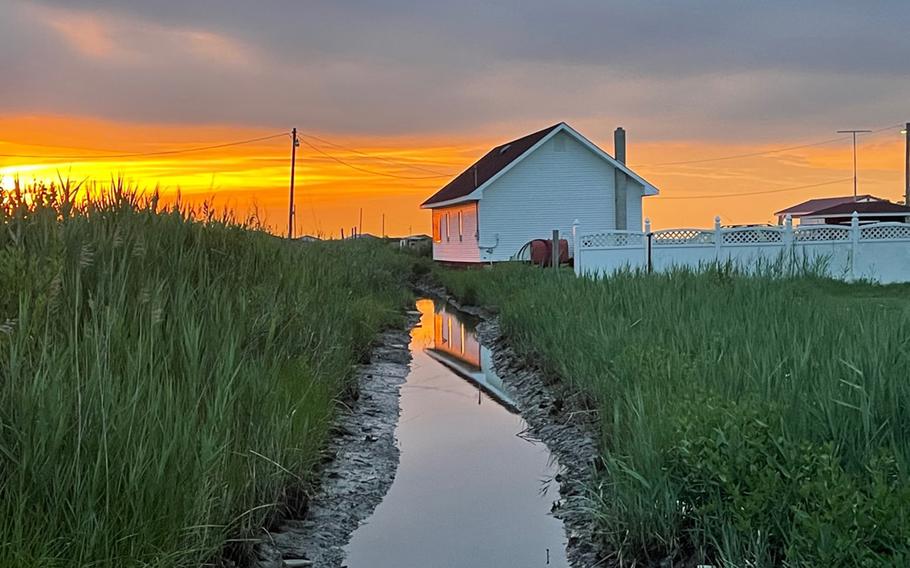 We docked in Ewell and, after quick stop at the Smith Island Cultural Center, walked along a road that was light on car (and golf cart) traffic but heavy with bird jams. More than half of the main island is salt marsh, and the knee-high cordgrass and black needlerush seemingly stretched to the Earth's curve. Jim peered into the distance and trained his 10-times-magnification binoculars on a yellow-crowned night heron with plumes that fluttered down its back like ribbons. A seaside sparrow with mustard-colored smears on its face flew by. "They're [mainly] found in salt marsh," he said. "They're not as charismatic as pelicans." As if on cue, a pelican banked around a curve and plunged into the water. The bird was probably fishing for its mate, who was stuck at home patiently waiting for Junior's shell to crack. 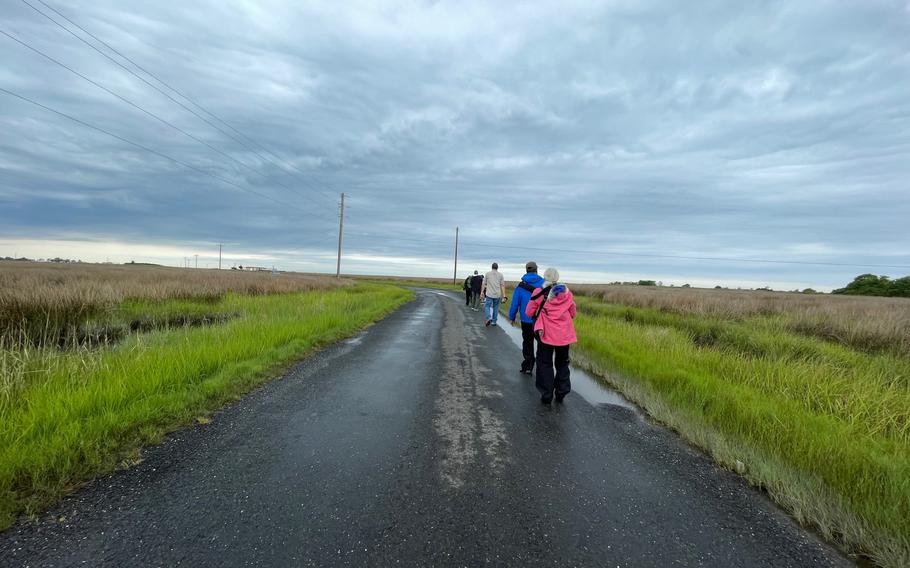 In June and early July, the rookery would typically resemble a nursery overrun with featherless black-skinned newborns with pterodactyl features or weeks-old hatchlings with heart-shaped brown patches on their backs. However, a Mother's Day storm had wiped out the nests around Smith Island. The birds left Drum Point, a recurrent breeding site, and the ones on South Point Marsh in Virginia, a few miles from Tylerton, started over, several weeks behind schedule.

"They lay eggs in May, and incubation takes 28 to 32 days. The babies can't fly until they're 75 days old," Jim said. "If you do the math, we could have baby birds till October."

In Tylerton, our group piled into three skiffs captained by islanders who could read the private thoughts of the sea and sky. I claimed the co-pilot seat next to Wes, who was clearly intrigued, if not smitten, by the pelicans. Before we set off for the colony, he told me that he had previously dropped by the library to further his education on pelicans. (Unfortunately, he found only a short paragraph about their nesting behaviors.) His daughter searched for information online and learned about a membrane, or third eyelid, that protects the birds' peepers in-flight and on fishing expeditions. She shared the discovery with her dad, who passed it along to his passengers.

"I thought they were just another bird," he said, "but later on, I got interested in them, especially when I started bringing people out to see them."

Wes piloted the boat across the Maryland state line and into Virginia and rounded a bend partially obscuring the rookery on Chesapeake Bay Foundation land. "You can smell them before you can see them," Jim said. "Enjoy the show." I switched my breathing from nose to mouth, and settled in for the spectacle.

The boats parked within close range of a scrubby berm dotted with nests and the white-capped heads of pelicans warming their eggs between their webbed feet. Incoming birds landed on the beach with blades of grass dangling from their beaks like cigarettes. Behind us, pelicans cooled off in the water.

The rookery was mainly populated by adults, with a few youngsters in the mix. "See those real dark birds?" Wes asked, pointing at what looked like chocolate-dipped pelicans. "They are last year's babies." The pelicans also intermingled with other colonial nesting birds, including herrings and great black-backed gulls. The double-crested cormorants, which had set up a maternity ward behind the pelicans, were also relatively new to the area. 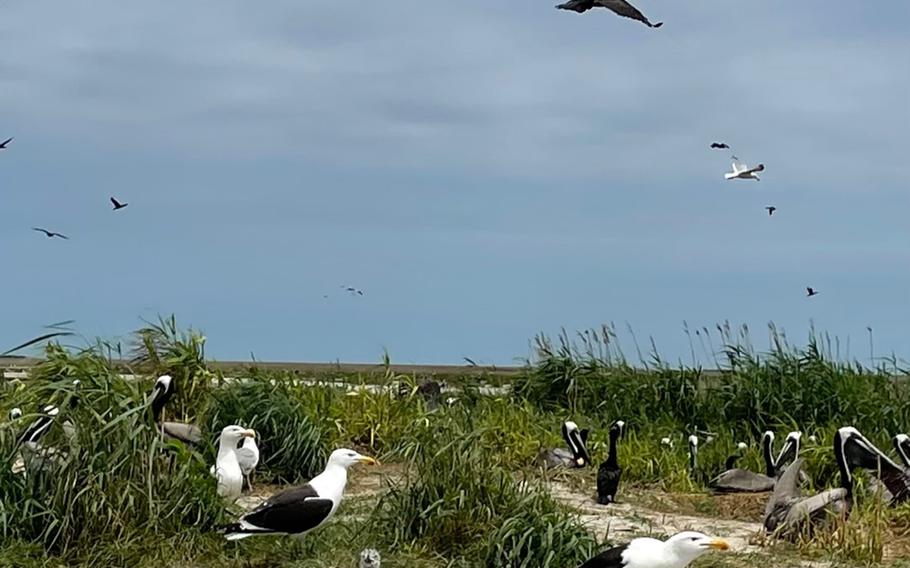 "I've been out here a bunch of times and I still ask myself, 'Am I really on the Eastern Shore?' " Jim said.

For a moment, we forgot about the pelicans as we watched a floofy gull chick hobble down the beach and stand apprehensively on the water's edge. Its parents, bobbing on the waves, squawked encouragement. The baby took one tentative step, then another, and was soon floating toward its life coaches. Our boat erupted in quiet cheers. Soon, it would be the pelican chicks' turn. Better late than never.

The Smith Island Inn rents three rooms in a restored Eastern Shore farmhouse, plus cottages, within walking distance of the main dock and the Smith Island Cultural Center. Guests have free use of canoes, kayaks and bikes. The inn provides a list of activities and local tour guides, such as Wes Bradshaw, who takes visitors out on his boat to see the pelicans ($30 an hour; 410-425-2250). Restaurants close at 4 p.m., but guests can preorder dinner for $45 per person, which includes an entree (crab cakes, for instance), sides, bread and a dessert choice of Smith Island cake or apple crunch pie. ​Rates from $139 a night, including breakfast.

The Maryland-based tour operator offers birding excursions around the Chesapeake Bay, such as Smith Island pelican tours, which are held throughout June. Jim Rapp, who organizes and leads the outings, could add more dates for July, so visitors can see the chicks, which have not yet hatched. The all-day tour costs $325 per person and includes round-trip transportation from Crisfield, Md., to Smith Island, skiff excursion to the nesting colony, crab cake and Smith Island cake lunch at the Drum Point Market, admission to the cultural center and bird guide.