Two years before we had kids, my wife, Cathleen, and I were on the Big Island of Hawaii, where we met a 25-year-old Colorado man and his partner, both of whom seemed relaxed, happy and sane as their toddler ran roughshod in the jungly vegetation between a rainforest hiking trail and the beach. Because I saw children in my future but dreaded the lifestyle shift they would bring, I asked this guy how he was managing it.

"If he sleeps when he needs to and eats when he wants to, we can bring him anywhere," he replied. "So we get to do pretty much what we want, and everyone's usually happy."

Over the intervening years, during which Cathleen and I had two kids and dragged them along on a suite of outdoor adventures, we discovered that getting our children into natural environs indeed benefits us all.

Numerous studies support our experience, finding that time in nature reduces stress and negative thoughts and correlates with higher self-reported happiness among adults and children.

That makes sense, says Patricia Hasbach, a psychotherapist in Eugene, Ore., author of "Grounded: A Guided Journal to Help You Reconnect with the Power of Nature-and Yourself." "We evolved as part of the natural world, but at this time in our history, we have never been more removed from it," she says, with about 80% of Americans living in urban environs and our society-wide dependence on technology. "It's all very primal, . . . and we need this re-engagement with the natural world."

I never analyzed it to that degree, but I knew that I was happiest when out in the wild and that I wanted to share that transcendental joy with my family. Here are some tips gleaned from my 13 years of trying to shape outdoor-loving kid travelers.

Toting infants and toddlers outdoors is as much about sustaining your own outdoor travel cadence as it is about engendering a love of nature in them. Because if you start using your spawn as an excuse to loll around sidewalk cafes, malls or (gasp!) your house, you might forever lose your mojo. 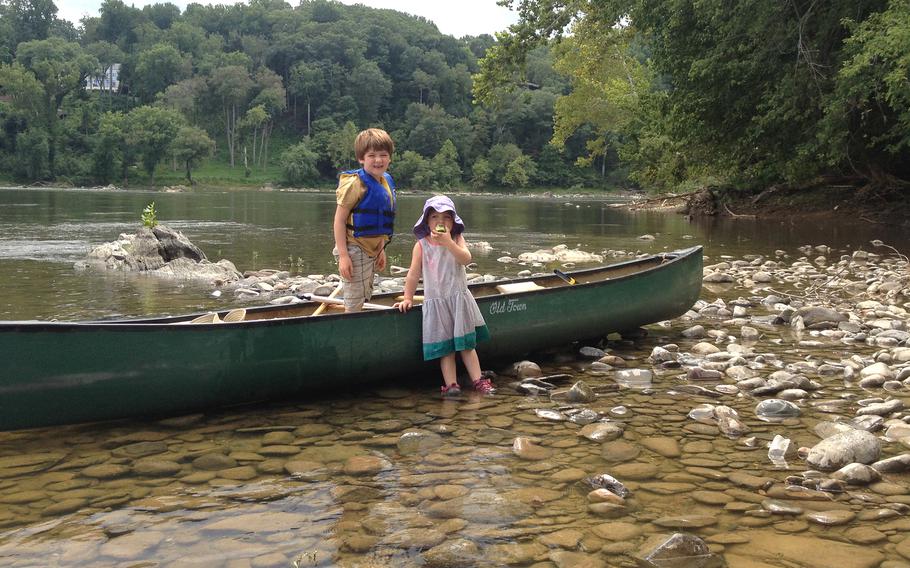 Kai and Christina - then 5 and 2 - take a break from canoeing below Offutt Island on the Potomac River in 2014. (John Briley/For The Washington Post)

The path to 1,000 awesome trips starts within reach of the panic button. Which is to say, when your baby still has that shiny new maternity-ward smell, get your nature reps nearby. For us, that meant walks in Rock Creek and Great Falls parks, during which we realized that Colorado Man was right: Babies have very simple needs.

Thus emboldened, when Kai was 5 weeks old, we slung him out to southern Arizona, where we cradled his tiny mass on numerous hikes, including one into the depths of Kartchner Caverns. Over the ensuing years, Kai, now 13, and his sister, Christina, 10, have dug in (and surely eaten) sands from such disparate locations as Cape Hatteras to St. Martin, hiked and skied all over the country, surfed waves in Hawaii, and biked, canoed, caved and rock-scrambled throughout the Mid-Atlantic.

They might not vote to repeat it all, namely the 2010 camping trip to a music festival outside Cumberland, Md., when hurricane-force winds and hail drove Cathleen and Kai into a sponsor's RV for refuge. Or the time 5-year-old Christina rocketed down a natural waterslide in a Shenandoah streambed, lost her footing and disappeared around a blind corner. (By the grace of Mother Nature, she landed in another pool, unscathed, just after I lost sight of her.) 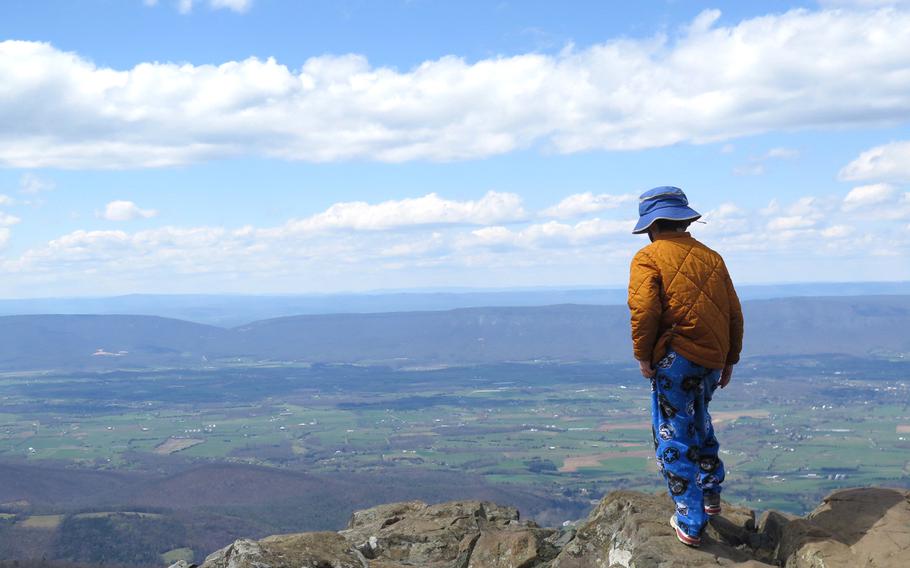 The author’s son, Kai, pauses on an overlook during a hike in Shenandoah National Park in 2016. (John Briley/For The Washington Post)

I shudder every time I recall that episode, but, as Hasbach says: "Our species has always been adventurers and risk-takers. That's part of our deep memory, and when young people don't get those opportunities to have close calls in the wild, they're going to seek other channels of risk: drugs, promiscuity and other things. If a kid falls out of a tree and breaks an arm, it can be set. But what if the kid never gets to be in a tree? What are we missing?"

Still, it can be tough to pry children away from sedentary entertainment, which is why you must . . .

Maxims such as "We'll all feel better after we do this," "No pain, no gain!" and "GET IN THE CAR THIS INSTANT SO WE CAN GO HAVE FUN!" don't resonate well with the under-10 set.

One tactic: Channel your inner child. On an early-pandemic Saturday, as Kai and Christina were upending our living room in a medieval battle and fiercely resisting our plans for a hike, Cathleen suggested relocating the drama to the evil lord's fortress - in George Washington and Jefferson National Forests. By midday, armed with foam axes, plastic swords and a convoluted storyline, we were powering through an eight-mile tromp with nary a complaint.

When all else fails, invite their friends. Kids would rather crawl across broken glass in a vacant lot with their friends than ski in Aspen, Colo., alone, so recruit accordingly. And once you're out there . . .

Don't push it too hard

My cousin Timmy, a former ski patroller in Utah, recounts the time he led his 4-year-old son, Griffin, down a double-black-diamond run after Griffin had successfully skied a couple of single-black-diamonds. "I knew he had the skill to ski it, but he just freaked out," Timmy said. "I had to carry him down. He refused to ski for three years after that." Although now, Griffin, at age 16, is a world-class competitor in the grueling sport of ski mountaineering, so make of that what you will.

In general, it's best to open the door to possibility and let the child determine the intensity level. Have patience, grasshopper: They'll ramp it up soon enough.

But definitely push it

Children are factory-set for adversity, insulated with fast-healing bodies and an innate sense of adventure and danger. "Things rarely go as planned out in the wild," Hasbach says. "So kids have to learn flexibility, problem-solving, resilience, and all those things contribute to self-confidence."

A couple of years ago, we found ourselves pedaling mountain bikes up a seemingly endless Appalachian fire road, and the long, flowy, downhill trail we'd heard about was nowhere in sight. With a mutiny brewing, I recalled the Navy SEAL tactic of assessing a big challenge as a series of smaller ones.

"If we make it around that next bend, it'll get easier," I lied to Christina. (Cathleen, with far more sincerity, promised her a cookie.) When the next bend, and the three after it, revealed only more uphill and Christina summoned curses upon my soul, I pushed both of our bikes while singing show tunes with her until we crested the ridge and rolled, to her audible woo-hoos, down a laurel-lined, three-mile trail and back to our campsite.

Never show you're worried - especially when you are

Lost in the Adirondacks? Out of water in the desert? Fighting upriver in a canoe as a thunderstorm bears down on the gorge? Been there, and even as the hair on my neck sprang to attention, I managed a cheery, all-in-a-day's-fun demeanor. Ask my children for the first rule of adventuring, and you'll hear, in two-part harmony: "Never panic."

What matters most to children is the same thing that matters to us: sharing invigorating experiences with the people we love. And for that, I have yet to find anything that measures up to the outdoors. One day way too soon, Cathleen and I will be excluded from many of our children's adventures. But until then, they're stuck with us, somewhere outdoors, living wild.