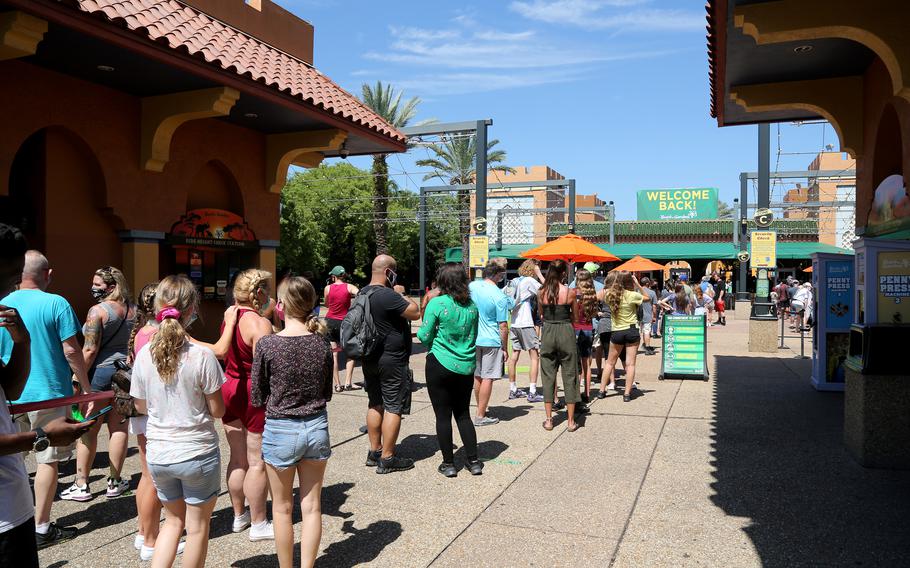 Visitors line up at Busch Gardens in Tampa, Florida, in June 2021. The park has a Quick Queue pass that starts at $14.99 to skip the line at least once per ride and up to $39.99 for unlimited rides, plus the new Iron Gwazi coaster. (Douglas R. Clifford/Tampa Bay Times)

As the noon sun bore down on Epcot, the line for one of its newest attractions, Remy’s Ratatouille Adventure, stretched around the block in the France pavilion with a posted wait time of 50 minutes. Meanwhile, other guests strolled into the ride’s Lightning Lane with no wait, boarding the swirling mouse adventure in less than 10 minutes.

On this recent afternoon, Kelly Urso, an ultrasound technician from Illinois, had ponied up $9 to check out the ride in the Lightning Lane, a new system Walt Disney World has implemented that charges for front-of-the-line access. It replaces FastPass+, the parks’ previous system of giving every ticket holder three free passes to reduce wait times.

Urso visits Disney World with her grandkids every few years and follows Facebook pages like Disney World Junkies for tips on the Genie+ trip planning system that includes Lightning Lane. For this trip, she decided to pay extra to avoid some lines, but not at every park.

“I feel bad for people. They took away a lot of the little perks, like the free shuttle, and added charges here and there.” She shrugs. “But I’m still coming. My kids and my whole family is coming to Disney at Christmas.”

In October, Disney ditched its free FastPass+ system and put in Genie+, which charges $15 per person per day to make reservations on select rides. Each park, however, has at least two attractions for which guests need to purchase a separate Lightning Lane ticket to skip the lines. That can cost an extra $7 to $15.

Few Disney fans are happy about it, but some are paying it: Disney has had record quarters in its earnings reports since it rolled out the new system.

“Get used to it,” said theme park expert Dennis Speigel, president of Cincinnati-based International Theme Park Services. “Our industry is moving towards the upcharge. Magic Mountain is doing it. Six Flags in California and others are experimenting with it. Within three or four years, you will see every park having a surcharge to get ahead of the line.”

The rest of Florida’s theme parks already have line-skipping add-ons. Universal Orlando’s Express Pass starts at $79.99 per person per day to skip the lines at most of its popular attractions, at least once per ride. The Quick Queue at Busch Gardens starts at $14.99 to skip the line at least once per ride and goes up to $39.99 for unlimited rides plus the new Iron Gwazi coaster. At Adventure Island water park in Tampa, the Quick Queue is $9.99 for one time on each ride and $24.99 for unlimited rides.

Len Testa, president of the vacation planning site Touring Plans, uses data to predict wait times at theme parks. He often advises his customers to get the express pass at water parks, since capacity is limited and lines can be long. His other tip: Stay at one of the three premiere Universal hotels — Royal Pacific Resort, Hard Rock Hotel or Portofino Bay Hotel — that offer an Express Unlimited Pass with the price of a room, because it gives a line-skipping pass to each person in the room.

Testa has been studying closely the changes at Disney. For those who can’t afford the extra $15 per person per day, “it’s a vastly worse experience than it was with FastPass,” Testa said.

Testa’s researchers collect wait-time data. They found on average that Disney will overstate its wait times 75 percent of the time, which can make it hard for customers to decide what attraction is worth the wait. He said he doesn’t think they are fudging the times intentionally, but it is a difficult thing to accurately estimate, “and there’s no financial incentive to get it right.”

“This is all because FastPass wasn’t explicitly monetizing the short waits in line,” Testa said.

The biggest drawback, he said, is the bottleneck that is created when a ride is down.

High-tech and very popular rides such as Star Wars: Rise of the Resistance and Mickey and Minnie’s Runaway Railway at Hollywood Studios, as well as Epcot’s Test Track and Remy, all averaged 45 minutes to two hours of down time per day in their study, he said.

When the ride goes back online, all those Lightning Lane customers get first priority, making the standby line even longer.

“So now everyone in the standby line has to wait not only for the people who have valid Lightning Lane passes, but now there’s the make-goods for everyone who had a pass while it was down,” Testa said. “It’s an astonishing amount of down time.”

Testa said a good 95% of his customers have been complaining about Disney’s new system.

“I found two people who liked it, because it just happened to work out for them that day,” Testa said. “People don’t like being nickel-and-dimed. The biggest complaint is you are stuck on your smartphone all day.”

Testa’s recommendation is that if it’s a once-in-a-lifetime Disney trip, the add-ons may be worth it, as is staying in a Disney hotel that lets you get into the parks early and log on to Genie+ earlier than other guests that day to reserve rides. He suggests using Genie+ for second-tier rides like Peter Pan and the Jungle Cruise that often have long lines, but aren’t a first pick for most people. Then use your early park admission for the A-list rides like Space Mountain, and use your Lightning Lane for the others.

For locals and park pass holders, Testa suggests paying the one-time fee of $7 to $15 to ride a particularly popular attraction instead of using Genie+, since you aren’t guaranteed to get the rides you want.

Donna Beech of Alabama, who was in Orlando recently for her daughter’s cheerleading competition at the Wide World of Sports, filed into an Express Pass line to see the new Bourne Stunt Spectacular show at Universal Studios. The group was at the front of the line and got to pick their seats a full 15 minutes ahead of the others waiting.

Since they are usually in the area at least once a year, “we always get a hotel that has an Express Pass,” Beech said. “It saves us so much time. When you average it out it actually saves you money to stay on property.”

Though many Disney parkgoers are grumbling, one veteran theme park blogger said Genie+ saved three hours in line in one day.

“For Seven Dwarfs Mine Train, every $1 that I spent saved me more than seven minutes of waiting in line,” said Summer Hull, a travel writer with The Points Guy travel advice site. But she did not like how much time she had to spend on her phone. “If you don’t want to mess with Genie+, consider buying up to two individual Lightning Lanes per day. That alone saved me almost two hours in line.”

Despite the grumbles from customers, Speigel said that, in his estimation, “it’s a win-win.”

“Like anything new, people will complain, but it is going to help guests plan their day better and prevent them from standing in line longer.”