At 80, Bob Dylan finally gets a museum 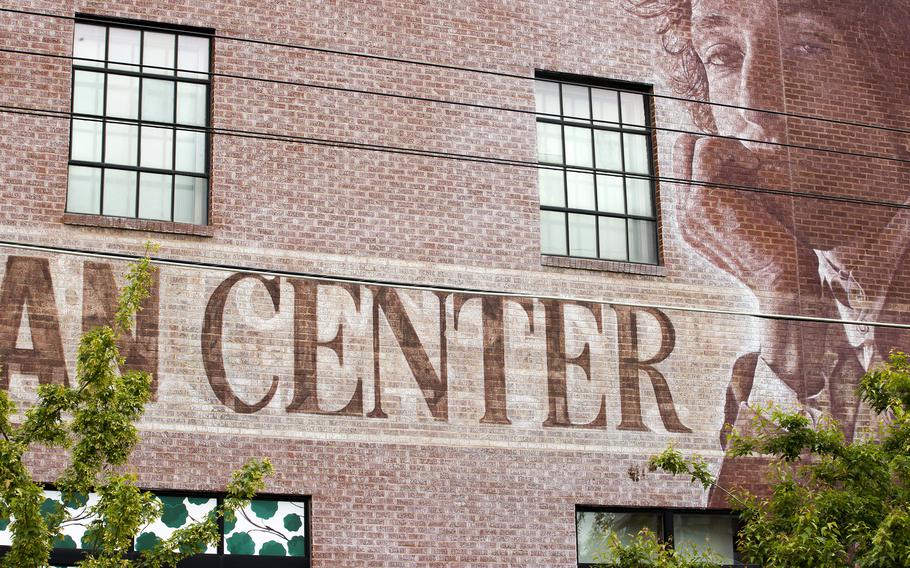 The exterior mural at the Bob Dylan Center in Tulsa. (Shane Bevel/For The Washington Post)

True to form, Bob Dylan was nowhere to be found as a construction crew put the finishing touches on his museum this week. The smell of fresh lumber lingered in the air, the fire marshal was checking emergency sprinklers and workers were setting up a jukebox with Dylan's greatest hits - in lieu of the reclusive genius himself.

A new museum and archive dedicated to Dylan and his work is set to open in Tulsa this month, the culmination of a six-year journey that began when local banking and oil billionaire George Kaiser's foundation bought Dylan's voluminous personal archive and pledged to create a home for it.

When the center opens Tuesday, the public will for the first time be able to see some of more than 100,000 items in Dylan's personal archive - including multiple song drafts, rare recordings and videos, and historic artifacts such as the battered Turkish drum that inspired the classic song "Mr. Tambourine Man." It promises a historic new look into the creative engine that has driven the singer's 60-year-career.

Organizers hope the 29,000-square-foot, $10 million center will become a cultural touchstone in Tulsa, offering both fans and hardcore Dylanologists a greater understanding of the famously enigmatic and guarded musician, who at age 80 is widely considered the country's greatest living artist.

"The scope of the material and its impact is almost without equal," said Steven Jenkins, the Dylan Center's director. "But we have no intention of trying to explain the Bob Dylan mystery. No matter how hard we try, the man at the core of all this somehow continues to remain elusive."

Historian Douglas Brinkley, a patron of the center, said it will provide a deeper understanding of the artists' body of work at a time when there has been a resurgence of interest in Dylan, who won the Nobel Prize for literature in 2016 for creating "new poetic expressions within the great American song tradition."

"The Nobel Prize caused skeptics - those who didn't like Dylan's voice or thought his artistry was only related to folk and rock 'n' roll - to wake up and realize he's one of our greatest literary masters, a national treasure," Brinkley said. "He's one of those artists like Louis Armstrong, Hank Williams or Woody Guthrie who embodies the best of the American spirit and is loved around the world." 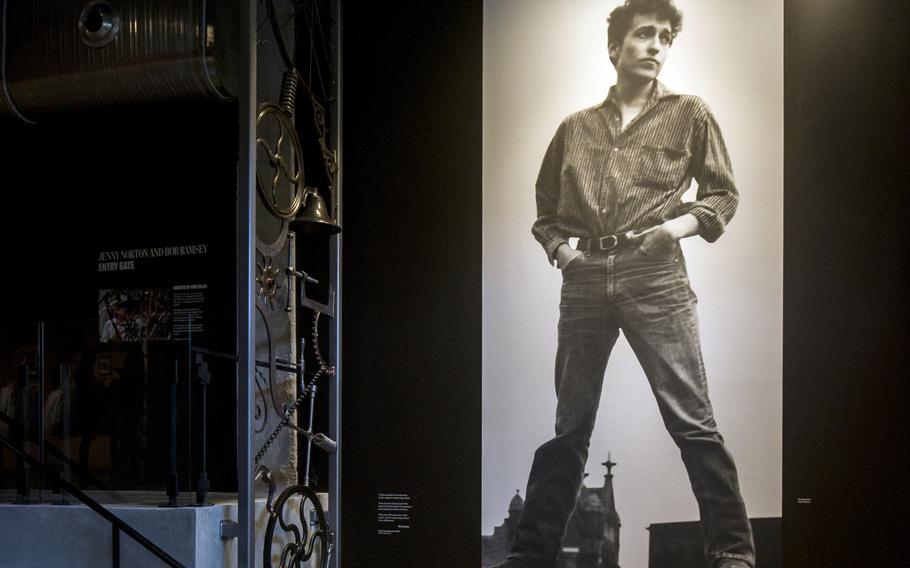 The 16-foot iron gate welded by Dylan at the entrance of the Bob Dylan Center in Tulsa. (Shane Bevel/For the Washington Post)

A mural of Dylan's moody visage from a 1965 photo now soars above the Tulsa arts district, on the side of an old brick warehouse complex that also houses the museum of Guthrie, the Oklahoma folk singer who was Dylan's early musical hero.

The Dylan Center's foyer is marked by a playful gate, a 16-foot swirl of iron castoffs and mechanical implements that Dylan welded and gave to the center - one of several nonmusical artworks he has exhibited in recent years. In a wink to the city hosting his museum, he used a salvaged iron piece marked "Tulsa Oklahoma."

In the main gallery, Dylan's life is portrayed chronologically on the walls, with photos, reproduced concert bills and album covers showcasing his life - from his birth in 1941 in Duluth, Minn., to his current status as Nobel laureate, a traveling troubadour who is "Still on the Road," as the exhibit puts it. Listeners with audio guides can stop to hear key performances, such as from his 1966 tour of Europe, when he scandalized some acoustic-loving fans by bringing out an electric guitar. Visitors can also listen to Dylan's early influences such as Little Richard at listening stations, or remix some of his famous tracks in a mock recording studio.

Six concrete pillars showcase key Dylan works such as "Tangled Up in Blue" and "Like a Rolling Stone," where fans can follow the songwriting from first spark to the album release. A Dylan quote in the entry was the key inspiration for the project, according to Sean Wilentz, a Dylan biographer who helped shape the bio wall.

It reads, "Life isn't about finding yourself or finding anything. Life is about creating yourself and creating things."

The "Tangled Up in Blue" exhibit shows the lengths to which Dylan labors over a song: rewriting lyrics again and again, years after he first put pen to paper and despondent over the failure of his first marriage. Viewers can listen to an early version so intimate and spare it sounds like a diary entry.

And then there are the "Blood Notebooks," which Archives Director Mark A. Davidson called the "collection's crown jewels."

For decades, Dylan scholars traded rumors over the existence of a "little red notebook" with scribbled lyrics for the album "Blood on the Tracks" that few had ever seen. Rolling Stone dubbed it "the Maltese Falcon of Dylanology." Believed to have been stolen from the singer decades ago, it eventually surfaced and made its way to the Morgan Library and Museum in New York.

When Dylan's archive was purchased in 2016, Davidson said, scholars discovered two other tiny notebooks that also contained draft lyrics from the 1975 album and persuaded the Morgan Library to send the red one to Tulsa under heavy security. All three are now on display together for the first time.

"They show Dylan in an incredibly strong point in his songwriting career," Davidson said. "He's writing in these little pocket notebooks microscopically, frantically. It is as much of a sort of unconscious brain dump as you can get."

A small reading nook rounds out the first floor, with books curated by Joy Harjo, the U.S. poet laureate and a Tulsa native who will be the center's first artist in residence. Upstairs, there is a private area for scholars and a public viewing gallery for key objects from the archives, such as the famous "tambourine," really a Turkish drum.

Sean Latham, a University of Tulsa English professor who oversees the school's Institute for Bob Dylan Studies, said his favorite item is an unopened sack of fan mail that had lain moldering and forgotten for years in the singer's house in Woodstock, N.Y. Latham and his graduate students have been opening and cataloguing the letters, which were written in 1966, shortly after Dylan had a motorcycle accident and stopped touring for eight years. 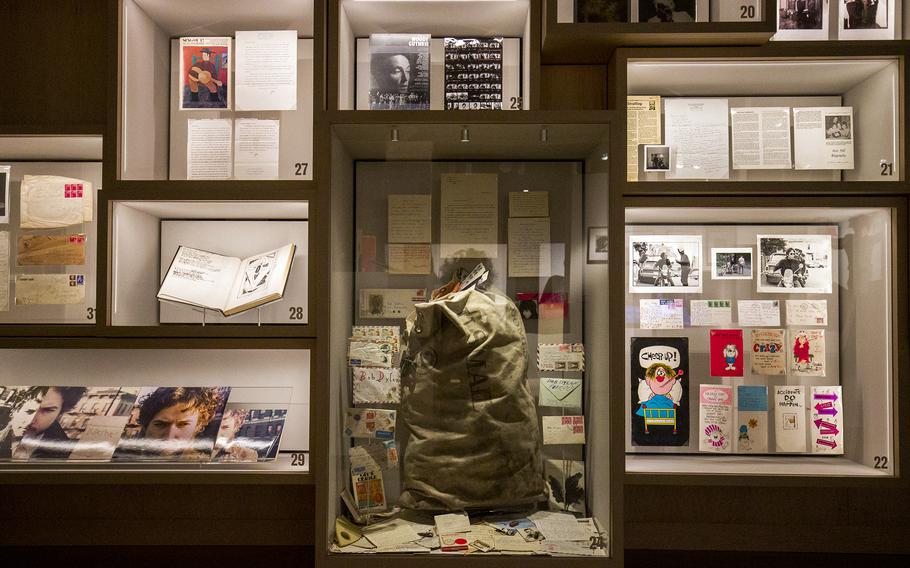 A wall of archive items contains, among other things, the bag that was found full of unopened mail from fans. (Shane Bevel/For The Washington Post)

"It's a time capsule of a time when Dylan was one of the world's most famous rock stars and an astonishing look at what his fandom looked like at this pivotal moment," Latham said.

His team found plenty of letters smeared with teeny-bopper lipstick, now a half century old, but also a poignant letter from a machine-gunner in Vietnam who had lost three friends in combat. The soldier loved the song "Blowin' in the Wind," he wrote.

"We've been in this Blood drenched country for 5 months," the soldier wrote. "I want to live so bad, just to see and touch my family & friends again." Davidson is still trying to find the man and determine whether he survived. A view of a massive interactive video display during the opening of the Bob Dylan Center in Tulsa, Okla. (Shane Bevel/For The Washington Post)

In September 2014, a tempting email arrived in the inbox of Ken Levit, the executive director of Tulsa's George Kaiser Family Foundation, the philanthropy of a low-key local billionaire that had expanded its programs from early-childhood education and development to the arts and creating public spaces.

The note was from a rare book dealer in New York whom Levit had worked with when the foundation purchased Woody Guthrie's archives from the folk singer's surviving children in 2011 and brought them back to Oklahoma, not far from the town of Okemah, where Guthrie was born.

"He said, 'I have got a set of materials for you of global significance - you need to call me back,' " Levit recalled. "I figured it was either the Beatles or Dylan."

As Levit described it, Dylan and his staff had seen how the foundation built a museum and center in downtown Tulsa around Guthrie's archives - thousands of scraps of paper, song notes, drawings and diaries. They hoped they could do the same for Dylan's personal collection.

Dylan had been an early acolyte of Guthrie, who was a pioneer of American folk music. He memorized all Guthrie's songs as a young man. After he moved to New York, Dylan often visited his icon in the hospital, where Guthrie was slowly dying of a degenerative nerve disease. Dylan would bring his guitar and sing Guthrie's songs to him.

So despite his scant connection to Tulsa, Dylan said it made "a lot of sense" to sell his archives to the foundation that built the Woody Guthrie Center when the $20 million deal was announced in 2016.

"There's more vibrations on the coasts, for sure," Dylan told Brinkley in an April 21 column for Vanity Fair, referring to his decision to choose Tulsa over more obvious choices such as his home state, or near his home in Malibu. "But I'm from Minnesota and I like the casual hum of the heartland."

Civic leaders hope the Bob Dylan and Woody Guthrie centers fuel an ongoing cultural renaissance in a metro area of 1 million people, with side-by-side archives transforming Tulsa into an emerging hub for the study of American music. The state historical society plans to open a museum devoted to Oklahoma pop culture and country music next year. And a local business executive, Teresa Knox, recently restored the historic Church Studio, a recording studio once owned by native son and musician Leon Russell, where Tom Petty signed his first record deal. The blues musician Taj Mahal and the Celtic punk band Dropkick Murphys are among contemporary artists who have dropped by to record.

"Tulsa has always been a crossroads, now it's going to be a crossroads for Americana culture," Brinkley said.

When Dylan came to Tulsa for a concert last month, he did not visit the center being created in his honor, although his longtime bassist, Tony Garnier, did stop by.

Nostalgia is "not his thing," Brinkley said. (The Bob Dylan Center was set to be inaugurated with concerts from his longtime friends and collaborators Patti Smith and Elvis Costello this weekend.)

An avid baseball fan, Dylan instead made time to quietly attend the season opener for the Tulsa Drillers, the town's minor league baseball team, according to Brinkley. The next night, he hung a Drillers pennant on his piano before he sat down to play.

The stage was nearly bare, save the upright piano facing the audience and two bright lamps. Along with VIP guests such as Olivia Harrison, the wife of the late Beatle George Harrison, many locals who worked on the Dylan Center looked on in rapt attention. Those in the closer-up seats could see only a tendril of his curly hair sticking up above the instrument.

"It was this disembodied voice of age and experience acting like an oracle form behind these lights onstage, said Latham. "I loved it."

Dylan, who will turn 81 this month, ended with a haunting performance of "Every Grain of Sand," his 1981 song about a man grappling with faith and mortality: "Onward in my journey I come to understand ... That every hair is numbered, like every grain of sand."