A guide to volunteering in the outdoors 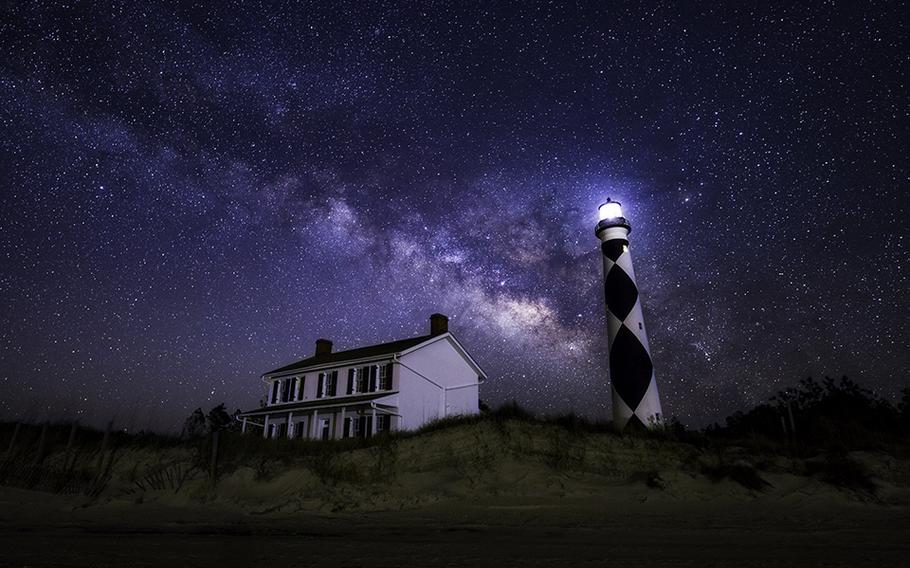 Wanted: Camp hosts to serve one month or more at Hart Mountain National Antelope Refuge in south-central Oregon. Duties: welcoming campers and visitors; sharing information about the area; and light maintenance, repairs and cleanup at campgrounds and restrooms. Applicants should be outdoorsy, outgoing and open to living in a remote setting. (The closest Walmart is about 160 miles away.) Camp or hook up your RV at no cost in exchange for 32 hours of service a week. In your free time, hike amid rugged cliffs and sharp ridges, soak in hot springs and spot wildlife - namely, 3,000-plus pronghorn antelope, along with sage grouse, bighorn sheep and hundreds of other species.

If that sounds tempting, it is, indeed, a real opportunity every year via the U.S. Fish and Wildlife Service (FWS). "It's one of the most beautiful places you'll be," says Shannon Ludwig, refuge manager for Hart Mountain. "Many things haven't changed in our part of the world," even after settlers arrived. "That's what's so special about it." (The 2022 camp host roles were recently filled but will be posted again for 2023 at volunteer.gov.)

In 2021, more than 16,000 people volunteered for duties that kept FWS national refuges and national fish hatcheries across the country running smoothly. And that's just one of the many agencies and nonprofits connecting volunteers with the great outdoors, whether they're working on organic farms, living in lighthouse keepers' quarters, building "castles" for oysters, welcoming campers to campgrounds and so much more. Travelers interviewed for this story say they've found meaning and community in exchange for their time and talents through volunteering.

In 2005, Keith and Brenda Krejci retired and traded their home in Dayton, Ohio, for the RV life. Along the way, they've found that volunteering offers a nice change of pace in their travels, allowing them to meet people and learn while hooking up their RV at no charge. They've done stints with FWS, the Bureau of Land Management, the Nature Conservancy and state park systems, sometimes for months at a time.

Since May 1, they've been volunteering with the Oregon Coast National Wildlife Refuge Complex, where, as interpretive hosts, they talk to visitors about marine mammals, shorebirds and tide pools.

"We're issued these wonderful $3,000 spotting scopes - binoculars - and given all the equipment we need. And we'll set up where we think there's an opportunity for people to see seals, sea lions, oystercatchers, things like that, and let people get a really close view," says Keith, 75. "And then we'll explain to them what they're seeing and answer any questions they have." They'll do this for about six hours a day, four days a week, in exchange for an RV hookup until Sept. 1. "We find we work more hours than required, because it's just so enjoyable," Keith says.

Donna Carmon, 53, and Kevin Wade, 58 aren't quite ready for the RV life; they both work full time and are engaged to be married, but they live in separate households. Still, they've been able to sample camper cohabitation for the past two years through a volunteer opportunity with the U.S. Army Corps of Engineers. Every weekend for six months out of the year, they commute about 30 miles west of Carmon's home near Kansas City, Kansas, and live in their camper at a campground near Clinton Lake, at no charge, in exchange for 20 hours of volunteering per week. Carmon works at the visitor center, while Wade handles maintenance duties around the park. In their free time, they boat, fish, hike and make friends at the campground. "There's farm fields, quiet, cows, the lake, and it's just beautiful," says Carmon, who learned about volunteering during a camping visit. "And we see deer every evening. Oh, it's just spectacular." 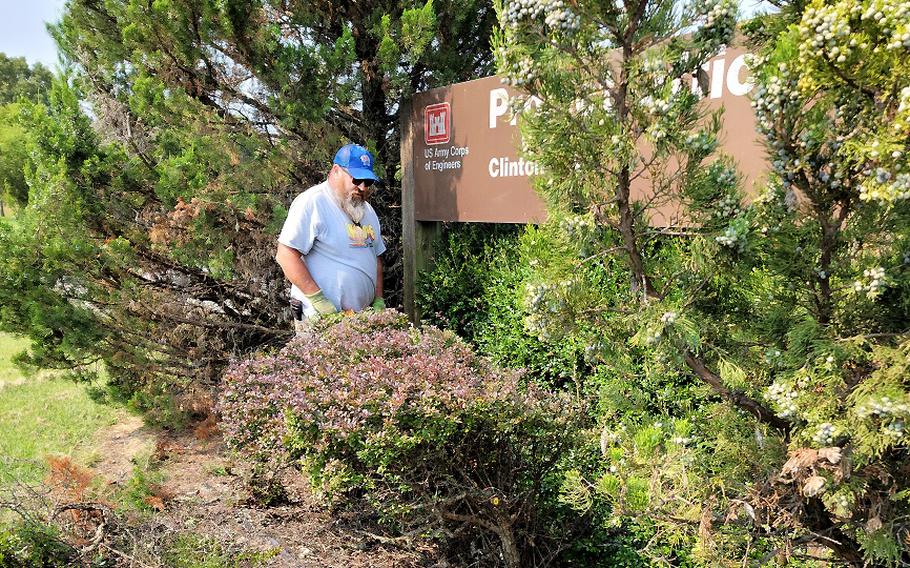 Kevin Wade volunteers with the U.S. Army Corps of Engineers outside of Kansas City, Kansas. (Donna Carmon/For The Washington Post)

Heather Burke, the national partnership and volunteer program manager with the U.S. Army Corps of Engineers, says volunteers are critical to the agency's sites in 43 states. They help with interpretation and education programs, fish and wildlife habitat improvements, invasive species management, trail construction and maintenance, photography and more. "Last year, we had more than 18,000 volunteers serving 1.56 million hours," Burke says. "And that equates to about 750 full-time employees."

As a volunteer at the lighthouse keepers' quarters at Cape Lookout National Seashore in North Carolina, Susan Burke, 74, says the most common question she gets is, "How did you get your job?"

It's actually a gig through the National Park Service that she found while perusing volunteer.gov four years ago. For two to three weeks a year, she travels to the undeveloped barrier islands and lives in a historic home where lighthouse keepers lived called the keepers' quarters. By day, she greets visitors who arrive by ferry and boat and talks about the history of the lighthouse and lightkeepers. When the last passenger ferry leaves, she embraces the quiet. "It's the best of both worlds," she says. "When the ferry comes and the visitors come, they're all excited to be here, and they're having fun. And then they all leave at 6 o'clock at night. And I have the place to myself."

The volunteer opportunities available through the National Park Service are as different as the parks themselves, including both run-of-the-mill duties (picking up trash) and intriguing endeavors (babysitting turtle nests on a beach). Shari Orr, the national manager of the agency's volunteer program, says nearly 300,000 volunteers a year play an essential role. Because of the pandemic, many regular volunteers have been unable to serve. "A lot of parks are actually rebuilding their volunteer programs right now," Orr says. "There's a huge need for new volunteers to come in or previous volunteers to reengage." Visit nps.gov/getinvolved/volunteer or volunteer.gov to see what's available.

Imagine rising with the sun - and roosters - to a farm-fresh breakfast and spending your day in nature, learning to milk cows and tend crops. The nonprofit Worldwide Opportunities on Organic Farms (WWOOF, at wwoofusa.org) connects the farm-curious with agricultural activities, including on urban farms in Detroit or biodynamic vineyards in Northern California. Volunteers work about a half-day approximately five days a week alongside the host in exchange for meals and accommodations, which can include whimsical treehouses or modest rooms in a farmer's home. Aside from an annual WWOOF membership fee ($40 single, $65 joint), no money is exchanged.

Most new members haven't set foot on a farm before, and they're often surprised but energized by the experience, says Tori Fetrow, outreach and marketing manager with WWOOF. "I think people go into it with their own idea of what farm life might look like, but when they get there, it's a little bit dirtier, it's a little bit harder than what they expected," Fetrow says. "But it's really exciting, and you find yourself doing these things that you never expected to."

The Nature Conservancy (nature.org) is an environmental conservation nonprofit founded by volunteers, and it continues to depend on them. "It's really rooted in our DNA," says Karen Tharp, director of Nature Allies, the conservancy's volunteer and community program.

Some of the outdoor opportunities inspire intense wanderlust - such as the chance to spend six months conducting research and helping out at a remote research station at Palmyra Atoll in the Pacific Ocean, about 1,000 miles south of Hawaii. Or, on Virginia's Eastern Shore, near the town of Wachapreague, building "oyster castles," which are structures made of concrete where oysters can live that help to protect the land from storm damage and waves.

Tharp says volunteering in nature gives people a sense of satisfaction and meaning. "We live in a time where we've got climate change looming, we've got environmental justice issues brimming, and people are just looking for tangible ways to do something, to give back," she says. "So they feel like they can be part of that solution."