A blooming cherry tree is seen not far from the Tidal Basin on Sunday in Washington. (Matt McClain/The Washington Post)

For the past two years, Taylor Busse, a newly minted nurse in Indianapolis, has marked time in pandemic surges.

She enrolled in nursing school in January 2020 just before coronavirus overtook the nation. A year later, she started working as a patient care tech during the first winter surge in a hospital crammed with COVID-19 patients.

On short-staffed days when Busse felt exhausted, she sustained herself with the knowledge that she was saving lives. But she knew she needed a break to help her feel human again.

Last week, Busse spread out a colorful cloth on a patch of ground with a commanding view of the Potomac Tidal Basin ringed with shimmering cherry trees. She stretched her legs out, smoothed her long red hair back from her face and tilted her head toward the sun. Like the cherry tree buds beginning to flower, the moment felt full of yearning and possibility.

"Obviously, it's almost spring literally right now, but it also feels like the spring of COVID," Busse, 25, said. "We're coming out of winter. You feel the sun, and you feel so awake and alive."

Busse was joined by thousands of people from around the Washington region, the country and the world who are swarming the Tidal Basin for the National Cherry Blossom Festival, raising cameras, sprawling beneath bowing branches and sitting in contemplation on the basin's banks. There was much to contemplate, after two years of sickness, isolation and death that had canceled one of Washington's signature events - the festival drew 1.6 million people in 2019 - due to fear of contagion. Even so, the symbolism of the cherry tree, rooted in the Buddhist theme of the transience of life, is made for this pandemic moment.

As he stood alone on the other side of the Tidal Basin mesmerized by the ethereal glow of the pale pink blossoms, Chris Cheng, a Buddhist who immigrated in his youth from Taiwan, searched for the words to express its meaning.

Cheng, 67, had journeyed from his home in North Potomac, Md., to see the cherry blossoms every year he was able before the pandemic prompted the cancellation of the festival. For him, its beauty has always gone beyond the sheer visual delight of the flowering trees.

"You really enjoy the moment here. You look at each blossom and you think this one is pretty, that one is not pretty, this one is the most beautiful," said Cheng, a retired computer scientist. "And at the same time, you also sense that the blossoms are blooming not because you are watching but because the time is right and that after a short period the petals will fall everywhere. Sometimes you feel they are like lives, floating down from a tree to the ground."

The cherry blossoms' perennial lesson on the impermanence of life is underscored this year, he said. 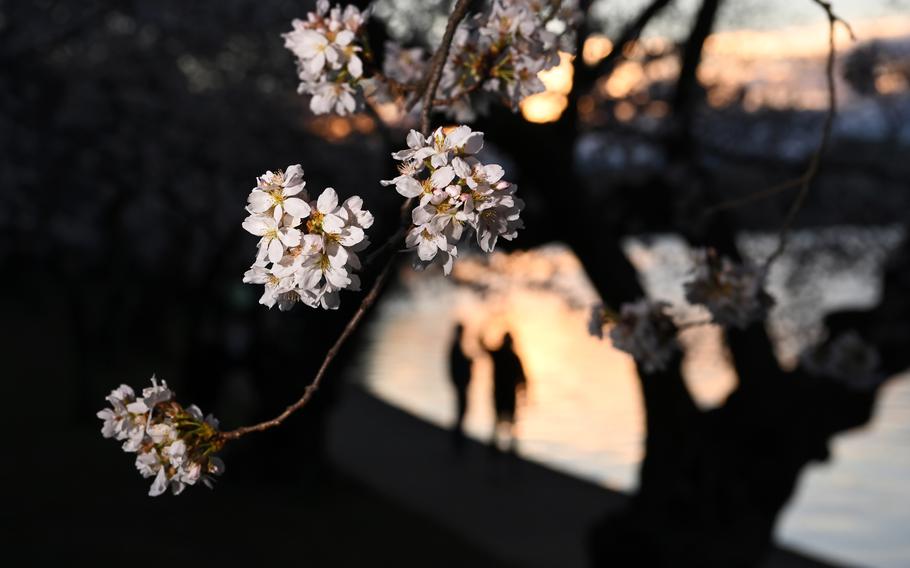 People gather at sunrise at the Tidal Basin to view the blooming cherry blossoms on Sunday in Washington. (Matt McClain/The Washington Post)

"You cannot say I just watch the cherry trees as usual because you have encountered the pandemic for so long, and you still feel pain," Cheng said. "But maybe you also feel you cherish every moment because you never know what will happen in the future."

Geoffrey Axe, 72, visiting from Bucks County, Pa., did not need to be a Buddhist to feel the symbolism of the cherry trees. "It's an ephemeral beauty," he said. "The blossoms open and within a short period of time, they are done. The trees are still here, but the blossoms are no longer. But fortunately, they come back every year."

"You don't know when the cherry blossoms will bloom," his daughter, Jennifer Axe, added. "It's a reminder that you're on nature's time. So get on board or you'll miss it."

Around the basin curve again, not far from where Busse was sprawling, a young Black woman in a striking, long pink flowered kimono smiled beatifically, an antidote to lingering pandemic sadness.

Lianne St. Jules, a 32-year-old from Gaithersburg Md., had lost no person dear to her to COVID. She quit her job as a supervisor at a pet resort due to an injured shoulder, then relished the time spent at home cooking and organizing with her longtime boyfriend, keeping guard over her health. But there was one thing she did miss: attending the Cherry Blossom Festival, which she had been doing annually since she was as a teenager.

St. Jules became so enraptured by Japanese culture that she joined the Japan-America Society of Washington D.C. and paid for lessons from a Japanese sensei, or teacher, in the proper way to wear a kimono. The festival had become an opportunity to demonstrate her knowledge and share it with the public. She has a clear preference for the casual Yukata, made of unlined, summer-weight fabric with shorter sleeves, despite the urging of her sensei to up her game.

"I didn't want to go into formal kimono because of how much I run around. The more formal your kimono gets, the less you move," said St. Jules, who credits her West Indian heritage for her interest in foreign cultures.

"The present is a gift," she said, fan tucked in her obi - the wide kimono sash - pink and white parasol in her Hello Kitty shoulder bag. "Every day of your life should be a celebration. ... I'm not going to wait for the proper occasion to have a special glass of wine. We are only here for so long, and you never know when it's going to end." 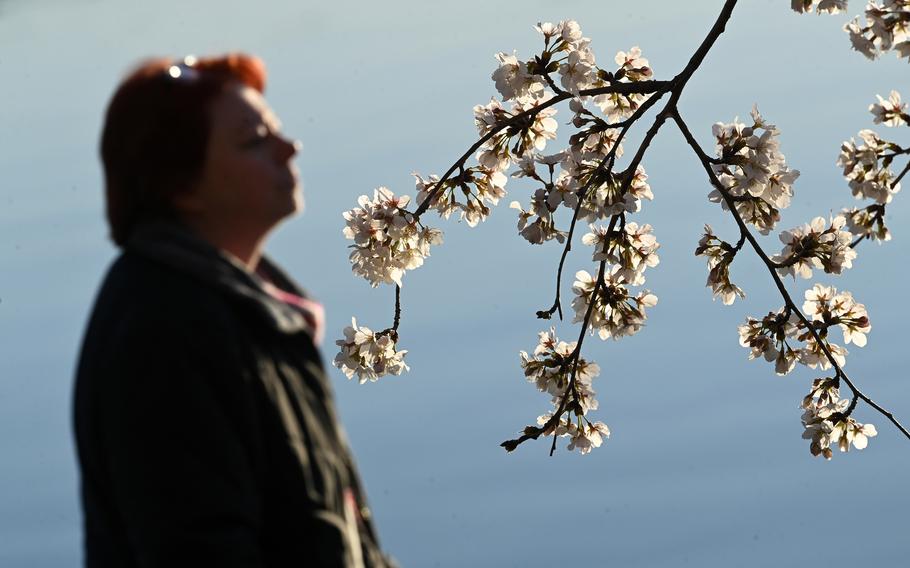 A pedestrian walks by blooming cherry blossoms along the Tidal Basin on Monday in Washington. (Matt McClain/The Washington Post)

For Ro Sood and Natasha Sidhu, the festival marked the beginning of what they hope will be the rest of their lives together.

Sood, 35, a growth manager at a small start-up in the San Francisco Bay area, saw his opportunity when Sidhu was scheduled to speak at a conference in Baltimore before beginning her medical residency in psychiatry.

Nearby D.C. is one of their favorite cities, he said, so it was easy enough to tag along. In late February, Sood started compulsively checking cherryblossomwatch.com to find the perfect day to carry out his plan. He purchased a round-cut diamond solitaire and hired a photographer to scope out an ideal spot.

The couple had known each other since they were children growing up in California and began dating a few years ago. Cooped up in their parents' houses, which happened to be just a mile apart, their deepening love for one another was an unexpected pandemic gift.

Sidhu, 32, observed the way Sood was quick to pick up on their parents' needs without being asked, grocery shopping to protect them from infection, making them elaborate treats to ease their isolation - overnight baked French toast, homemade biscuits with gravy, blueberry coffee cake.

"I learned that he is deeply loyal and makes sure his family is taken care of," Sidhu said.

Sood admired Sidhu's gift for nurturing plants, monstera and aloe vera, cilantro and sage. "She has such a caring hand," Sood said. "She would understand when a plant was sick and what it needed. . . . I really learned how caring she was."

So a proposal in nature made delightful sense. As the expected peak bloom day of March 23 approached, Sood suggested they visit the Tidal Basin to view the cherry trees. After a bit of a detour to explore, the couple wound up at the predetermined cherry tree near the Thomas Jefferson Memorial, not far from where Cheng had looked out on the basin. Behind them, the Washington Monument pierced the sky.

Sidhu bent to pet two passing dogs and when she rose and turned around, Sood was on one knee, looking up at her.

"She smiles with her eyes very big and she had had a huge smile on her face," Sood said. "She knows me very well, and I didn't have to say anything. She just held my face and said 'Yes.' "

The photographer snapped away.

Later, after the newly engaged couple returned home, the image would linger indelibly in their minds. In a matter of days on the Tidal Basin, though, the petals would begin their gentle fall to the ground.