Winter is a wild time along the San Diego coast. How to spot whales, octopuses and more 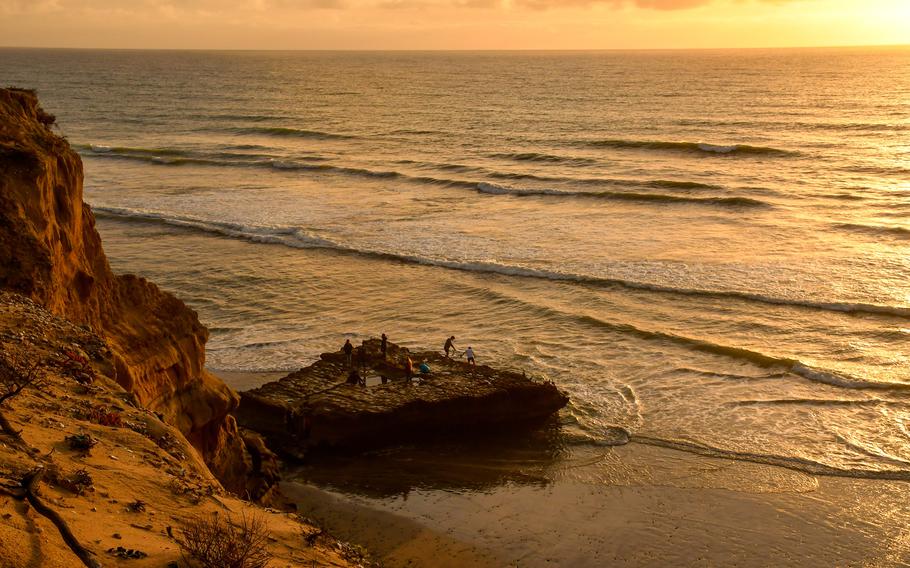 There’s something special about a Southern California beach in winter — something restorative about bundling up in a heavy jacket to take in the waves and the often-showy January sunsets.

Nature seems to agree: Winter is a prime time to visit tide pools and spot migrating gray whales off Southern California. There are ways to get up close and personal with the Pacific during the chilliest months of the year in San Diego.

As the omicron variant of the coronavirus continues to spread in Southern California and beyond, exercise caution (and wear a mask) if you choose to travel. Here are some tips for staying safe.

The tide pools at Cabrillo — considered one of the state’s best-protected rocky intertidal areas — are a haven for animals, algae, sea grass and more. When the tide pulls away from the coast, seawater and marine animals get left behind in the tide pools, where they can easily be seen by park visitors.

What kind of animals might you spy? Barnacles, crabs, mussels and anemones, to name a few. The low zone of the pools — which visitors are able to see only during the lowest tides — is home to sea stars, fish, spiny lobsters and even octopuses.

With the opportunity to glimpse some of these seaside stunners comes the responsibility to help protect the marine life native to Cabrillo.

Visitors are strictly prohibited from collecting any natural items, including living or dead animals, shells and rocks, and absolutely no organisms attached to a surface should be removed — force can harm animals such as urchins and sea stars. The Marine Mammal Protection Act also forbids approaching or engaging with any marine mammals.

Fall and winter are the perfect time to visit, when park hours best overlap with low tide. Generally, it’s best to visit the tide pools within a four-hour window — two hours before low tide and two hours after. The park’s tide pool area closes at 4:30 p.m. each day. If possible, I’d suggest staying late into the afternoon. The sight of the tide pools at golden hour is spectacular.

Entrance for those arriving on foot or on bicycle costs $10. If you’ll be driving to the tide pools, expect to pay $20 for your vehicle (this price covers the entry fee for all passengers). If you have no idea what I’m talking about, you probably haven’t visited this network of seven sun-dappled caves along the San Diego County coast.

Almost all of the caves are inaccessible by land, but you may be able to visit them on a kayak tour of the San Diego-La Jolla Underwater Park.

Outlets such as La Jolla Kayak and La Jolla Sea Cave Kayaks offer guided tours, where kayakers have the chance to see pelicans, sea lions and many other types of marine animals while learning about the ecological reserve.

Entrance to the sea caves is not guaranteed and depends on safety conditions. Rentals start around $44, though pricing varies based on date.

Learn from oceanographers at the Birch Aquarium at Scripps

For those who would prefer to keep their feet firmly on land, the Birch Aquarium — part of the Scripps Institution of Oceanography at UC San Diego — offers an excellent alternative to time spent on the water.

Visitors to the aquarium have the chance to learn about discoveries made by Scripps Oceanography scientists while getting an up-close look at different marine habitats and the animals that call them home. The two-story giant kelp forest mirrors many of the kelp forests divers encounter in the waters off San Diego: In this exhibit, visitors can spot leopard sharks, moray eels and more.

Sea dragons and sea horses are the stars of the aquarium’s new permanent exhibition. The aquarium’s experts have successfully bred weedy sea dragons as part of this initiative, a feat achieved by only a few aquariums around the globe.

Coming soon in summer 2022: an exhibition dedicated to little blue penguins and their conservation.

Scores of gray whales journey from Alaska to Baja California each year, making one of the longest annual migrations of any mammal. Many pass by San Diego’s 70 miles of coastline, making the city’s cliffs, beaches and bluffs ideal for whale watching from December through April.

According to San Diego tourism officials, prime whale-watching spots include:

The Birch Aquarium at Scripps

Those hoping to dive even deeper into gray whale migration might consider driving 65 miles from San Diego to Dana Point, which in 2021 was named the first Whale Heritage Site in the U.S.

Another reason to stop by Dana Point on your way to or from San Diego? A bronze statue of surf icon Joyce Hoffman will be added to Waterman’s Plaza on Jan. 27. Starting in late January, you’ll be able to spot Hoffman — and hopefully some whales — in the coastal city.