I walked between the rusting tire-less cars at the Bombay Beach Drive-In, snapping photos with each step. Arranged in four rows, the vehicles were all facing the screen: the white body of a semi-truck trailer. Two rows of Ferris-wheel seats were positioned directly in front. Like many things in the small Southern California town of Bombay Beach, the drive-in was an art installation.

The town was the focus of a day trip from Palm Springs to the Salton Sea, the largest lake in California, in late October. My friend Miles and I drove 64 miles into the desert to explore one question: How did a small town along a shrinking lake become an arts destination?

The Salton Sea is both an ecological disaster and a miracle. The current lake was formed in 1905 when the Colorado River flooded the low-lying basin, and it later became an important nesting site for an estimated two-thirds of the bird species in the continental United States because of the loss of other wetlands in California. During the late 1950s and early 1960s, the lake and surrounding towns became a popular recreation and sport fishing destination.

Starting in the 1960s, the terminal lake (meaning it has no outlet) faced rising salinity levels, pollution from irrigation wastewater and chronic incremental flooding. Nearby towns were affected when property values and recreation revenue dropped. These factors, combined with the 2003 Quantification Settlement Agreement, a rural-to-urban water transfer that caused the lake to shrink rapidly, have led to severe environmental concerns. According to Audubon, the ecosystem is on the brink of collapse, which would devastate the approximately 400 bird species that nest there. Nevertheless, there is some hope: Various entities, such as the Salton Sea Authority and the California Natural Resources Agency, are working on mitigation efforts.

At first glance, Bombay Beach, population 231, looks like a partial ghost town, a flat eight-by-four-block grid partially surrounded by a tall dirt levee. Abandoned lots stand next to sleek modern homes. There are no chain stores or billboards in town, a refreshing lack of corporate presence.

As we drove around, the line between reality and art blurred. The installations included a yellow-and-orange life-size cow sculpture peering down from a rooftop and a very realistic faux Sotheby's International Realty office, complete with a desk and chairs inside.

A 50-foot metal tower built from a 1942 military jet, decorated with handblown glass flowers, dominates the skyline on the east side of town. The sculpture, "Lodestar" by Randy Polumbo, has been exhibited at both Burning Man and Coachella art and music festivals. At the corner of 4th Street, I jumped out of the car to photograph a colorful arrangement of more than 60 painted TVs stacked haphazardly beside an old wooden garage. Every shade in a box of crayons was on display, with designs of city skylines, faces and more. On the far left sat an enormous unpainted TV - a new addition - that looked as if it belonged in the living room of a 1990s sitcom. As we were taking photos, the artist, Jack Parker, walked up with a can of spray paint and a stencil. 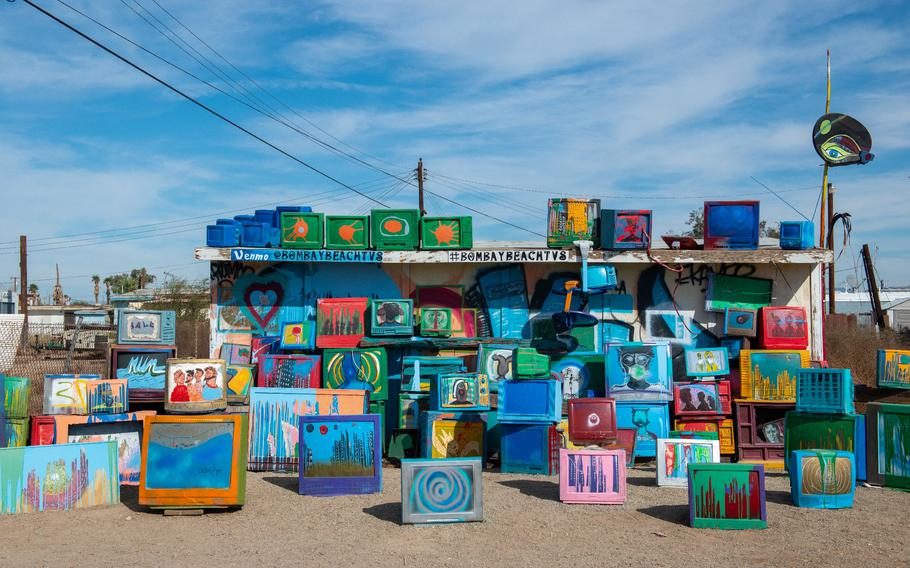 When the local dump wouldn't take his old TV, Parker put it outside across the street from his house and painted it. The next day, two more TVs appeared beside it, and the collection grew. "Every one of these TVs came from Bombay, because nobody brings their dead TV into [the] desert," says Parker, who named the project "Bombay Beach TVs." "I've given them a new life."

Parker pointed us toward the beach. We drove across the tall dirt levee, built in the late 1970s after two hurricanes flooded the region, then we set out on foot. Dozens of art installations and the ruins of old homes covered the lakeshore. A wooden sign that read "Help Our Sea" painted in white caught my attention; a small piece of wood dangling from the bottom read "- 70 meters."

A young woman with a tripod was taking photos in front of a mailbox beside a wooden frame of a building front that led to nowhere. Closer to the water stood a large metal sign that read: "The only other thing is nothing." A wooden swing stood alone in the lake and looked appealing, unlike the water.

The air smelled slightly sour; air quality along the drying lake was an issue in a recent study. According to one of the study's co-authors, Shohreh F. Farzan, assistant professor at the Keck School of Medicine at the University of Southern California, a day or two of exposure is not a concern for visitors, except for those with chronic conditions. "However, the greater concern is for the vulnerable communities surrounding the Salton Sea that are chronically exposed to elevated air pollutant levels," she says.

Farther down the shore sat a pastel blue-and-yellow metal newspaper dispenser with the word "news" painted in black capital letters. We meandered around old pier pilings and discovered the largest piece of artwork on the beach: a large concrete star suspended in the air by steel rebar. Adjacent to the star stood an abstract eight-columned outline of a waterslide made from rebar with a lone swing on the end, which I couldn't resist trying out.

Like most of the structures on the beach, this art installation was from the Bombay Beach Biennale, an annual celebration of art, music and philosophy that is held every spring and focuses heavily on permanent artwork.

"It's not an event, and it's not a festival," says Tao Ruspoli, who co-founded the Bombay Beach Biennale with Stefan Ashkenazy and Lily Johnson White in 2016. "It's more a movement of artists who are using their work to effect tangible change in a place that so desperately needs it. We want to bring creative, intelligent and thoughtful people to the town to interact with it sensitively and meaningfully, and to interpret the spaces in ways that provokes and tries to bring attention to everything that's happened here, both historically and in the present."

Many artists, including Ruspoli, have also bought homes in town and have become part of the community. And they have contributed to the local economy by hiring residents to build art installations and even remove more than 40 dumpsters worth of trash from abandoned lots. "The town has gone from being kind of accidentally weird to purposefully weird," he says.

Art has made the town a low-key tourist destination in the winter. (There are more than a dozen Airbnb listings.) Parker even had to move his TV installation around the corner when cars started blocking traffic to take photos.

On our way out of town, Miles and I stopped at the Ski Inn. It was the dive bar of my dreams: The walls were lined with red vinyl booths and covered with $1 bills scribbled with dates and names of previous visitors. Behind the bar was a photo of celebrity chef Anthony Bourdain from when he stopped by for a patty melt. 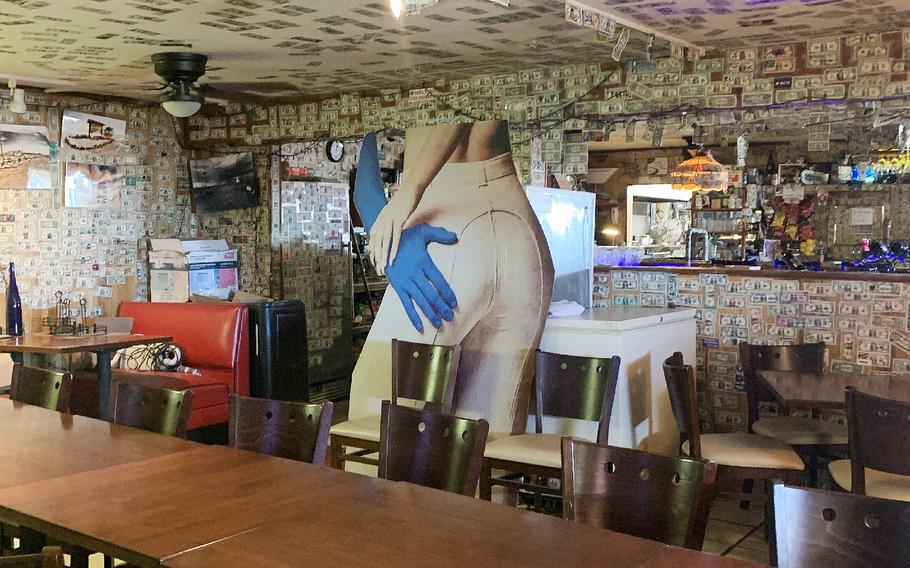 The Ski Inn, a dive bar and restaurant that features $1 bills scribbled with names and dates, is seen in in Bombay Beach, Calif. on Oct. 22, 2021. (Anna Mazurek/For The Washington Post)

We ordered two beers and walked past the pool table to the spacious, leafy outdoor patio. Our conversation turned to the interesting claim on the sign outside: the lowest bar in the Western Hemisphere.

The bar's owner, Sonia Herbert, offered clarification. "We are 230 feet below sea level, and we are the lowest bar in the Western Hemisphere," says Herbert, who bought the bar four years ago. "Badwater [Basin in] Death Valley is the lowest spot, but they don't have a bar there." Herbert is also quick to point out that artists have brought world recognition to the area, especially to the Salton Sea, and are an asset to the town.

We waved to the bartender as we left. He and the two locals at the bar waved back.

A few weeks after my trip, I couldn't stop thinking about Bombay Beach and how art had revived the town as a tourist destination and shined a light on the environmental concerns. The unique aspect of the town was that it didn't remind me of anywhere else, which is a rarity for someone who travels for a living. Inspired to visit again, I sent a text to Miles asking whether he would like to go back in the spring and spend the night. The Event Horizon by Martin Taylor is seen in Bombay Beach, Calif., on Oct. 22, 2021. (Anna Mazurek/For The Washington Post)

According to the sign outside the Ski Inn, the bar and restaurant in Bombay Beach is the lowest bar in the Western Hemisphere, at 230 feet below sea level. The classic dive bar has an expansive shaded outdoor patio that's perfect for an afternoon drink. The menu includes a variety of tasty burgers, patty melts and pie. Lunch entrees from $4.75. Open daily 10 a.m. to midnight.

Every spring, Bombay Beach hosts an annual celebration of art, music and philosophy called the Bombay Beach Biennale. After a two-year hiatus because of the pandemic, the event is scheduled to resume in 2022. Dates are traditionally not posted publicly; check website for details.