My rental car shook violently as it slowly crept down the bumpy dirt road along the southwestern tip of Puerto Rico. When the road ended, I set out on foot up a dirt path that led to the gray-and-white Los Morrillos lighthouse, built on the edge of a cliff in 1882. The windows and doorways were the same shade of turquoise as the water crashing into the rust-red sandstone cliffs below.

The lighthouse was my first stop along Puerto Rico’s west coast in early November. After spending a few days of my first trip to the island exploring Old San Juan and nearby tourist sites, I fled the cruise-ship crowds and congested highways for the remote west coast’s narrow two-lane roads and secluded beaches. My goal was to explore this less-crowded part of the island, known for surfing, hilly terrain and an endless surplus of sunny, 80-degree days. Learning to surf was another priority, but rough seas with waves too big for my novice skill level crushed those plans. Instead of a surfing trip, this would become a relaxing 10-day beach and hiking trip.

From the eastern side of the lighthouse, I could see stretched out below a pristine, crescent-shaped beach that belonged in a Jimmy Buffett song. I walked across the undeveloped, tree-lined beach and followed a trail up another set of cliffs to photograph the lighthouse from across the bay. Then, I couldn’t resist a dip in the water to cool off. Even though a dozen people were on the beach, it still felt isolated. It was only Day 1, and I had already found my favorite beach in western Puerto Rico: La Playuela.

After another bone-rattling drive, I stopped at the Cabo Rojo Salt Flats and walked along the catwalks between reddish-pink salt ponds. The 1,249-acre area was added to the Cabo Rojo National Wildlife Refuge in 1999 and includes trails for biking and hiking around the two main lagoons, Fraternidad and Candelaria. A private operator harvests the salt, which is left behind when the water evaporates from exposure to the sun, wind and heat. The lagoons are home to a variety of microorganisms, including Dunaliella salina, an alga responsible for the red hue. The water of the Cabo Rojo Salt Flats has a reddish hue because of an alga called Dunaliella salina. (Anna Mazurek/For The Washington Post)

“Although it is a green alga, it creates a large amount of carotenoids (beta-carotene) to survive and protect themselves against the intense light,” Ana Roman, deputy project leader at the Caribbean Islands National Wildlife Refuge Complex, said in an email. “High concentrations of carotenoids (red-orange pigment) are what creates the pink color effect in the salt flat ponds.”

This alga is a critical food source for brine shrimp and other salt-tolerant species, which attract migratory shorebirds. The salt flats, with their prevalence of food, are one of the most important stopover points for these birds in the entire Caribbean. Cabo Rojo’s lucrative salt-collection business has resulted in several historical conflicts, according to Roman. There have been numerous ownership and exploitation issues involving not only the Spanish, who colonized the island after the arrival of Christopher Columbus in 1493, but also the British and Dutch, among others. In 1769, a bloody fight broke out between local communities over land ownership of the salt flats, leading the area to be named El Combate, which translates to “the battle.”

For another history lesson, I visited the sleepy town of San Germán, the second-oldest city on the island, after San Juan, known for its well-preserved colonial Creole architecture. Founded on the coast in 1511, it was moved inland to avoid plundering pirates in 1573 and is listed on the National Register of Historic Places. The centerpiece is the 1692 Iglesia de Porta Coeli, one of the oldest church structures in the Americas, which was originally used as a monastery chapel but now houses a small museum.

After a morning of exploring, I drove about 13 miles to Joyuda, a three-mile strip of seaside seafood restaurants known as the Gourmet Golden Mile, for lunch. I snagged a table on the shaded waterfront patio at Náutica by Poly’s and ordered a delicious conch mofongo relleno, fried mashed plantains stuffed with conch and served in a tomato-based sauce. By the time I finished my meal, there wasn’t an empty seat on the patio, and the hum of both English and Spanish conversations filled the air. 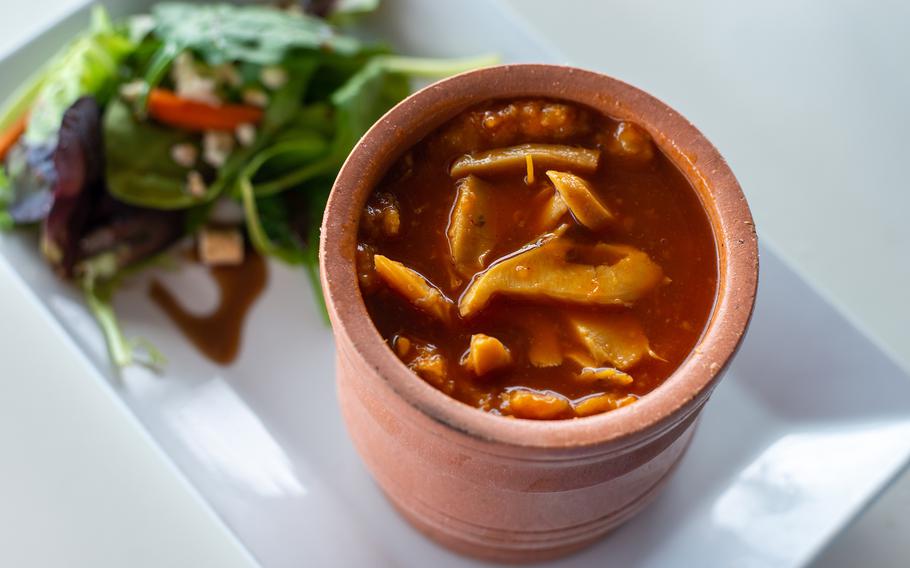 The conch mofongo relleno from Náutica by Poly’s in Joyuda, a three-mile strip of seaside seafood restaurants known as the Gourmet Golden Mile. (Anna Mazurek/For The Washington Post)

The ocean got rougher as I headed north to Rincón, where the Caribbean Sea meets the Atlantic. The surfing haven covers about eight miles of coastline and skyrocketed to fame after hosting the 1968 World Surfing Championships, which earned it a mention in a Beach Boys song.

Because winter is peak surfing season, I watched experienced surfers ride large waves at Domes Beach, named after a defunct, dome-shaped nuclear facility that dominates the skyline. By 8 a.m., the parking lot was already overflowing, and there were 27 surfers in the water. Like many of Rincón’s beaches, Domes is a small, secluded, palm-tree-lined strip of golden sand stretched between cliffs and rocky outcroppings. One of the few exceptions is the seemingly endless Sandy Beach, which is bordered by rows of hotels and restaurants. Domes Beach, named after a defunct, dome-shaped nuclear facility that dominates the skyline, is a popular surfing spot in Rincón. (Anna Mazurek/For The Washington Post)

Another highlight was the Tres Palmas Marine Reserve, home to the endangered reef-building elkhorn coral, as well as colorful marine life including parrotfish and blue tangs. The reserve encompasses three beaches and is an excellent snorkeling spot during the summer, when the water is calmer. The most photogenic of the three beaches is Steps, known for a mysterious set of concrete stairs sitting at the edge of the beach.

The beaches weren’t the only thing worth visiting in Rincón; the craft beer at Rincón Beer Company, fish tacos at Jack’s Shack and Sunday brunch at the English Rose were also pluses.

Despite congested parking lots, the Rincón beaches never felt crowded. That changed when I drove about 14 miles north to Aguadilla’s Crash Boat Beach, famous for a uniquely shaped blue pier once used to dock rescue boats that were sent out to save downed pilots from the nearby U.S. air base. Food stalls filled the parking lot, and speakers were blaring. This was the party beach packed with locals and a few tourists. The farther north I went, the rougher the water got; a riptide warning kept me out of the ocean for the rest of my trip. I decided to hike from Surfer’s Beach to Survival Beach, a sliver of shoreline accessible only by foot. I started my hike at the Surfer’s Beach parking lot and meandered through the tropical forest along a makeshift trail that spiderwebbed in all directions, staying on the path that hugged the coast. I shared the trail with a retired New England couple who moved to the island to perpetually escape winter. 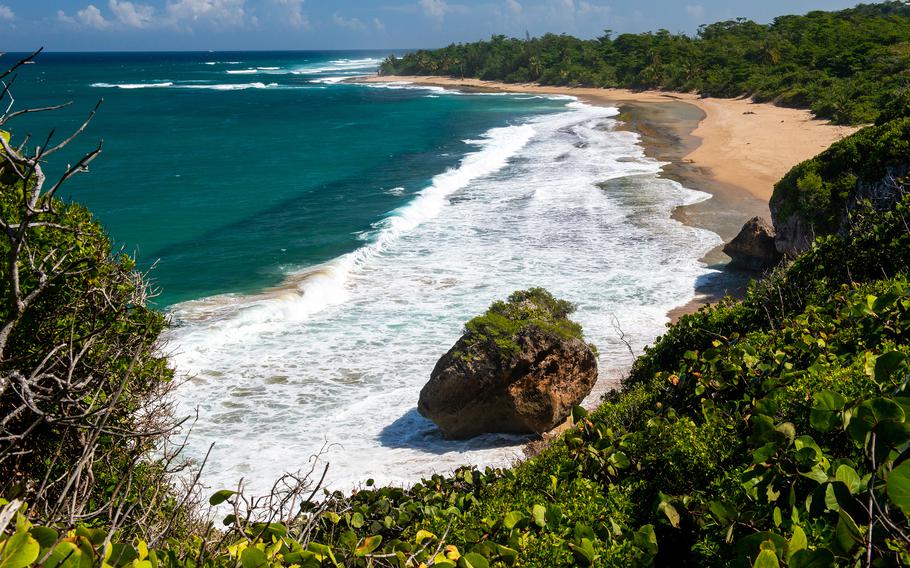 The beautiful Survival Beach is only accessible by foot. (Anna Mazurek/For The Washington Post)

Lizards scurried into the bushes as I made my way to a section of beach filled with giant rock formations and caves reminiscent of a scene from “The Goonies.” Then I entered the forest again and climbed upward along a tree-root-lined path until I caught a bird’s-eye view of the windswept sands of Survival Beach. Despite trying numerous trails, the tide prevented me from reaching it. Regardless, these beachside trails and secluded coves became one of my favorite aspects of Puerto Rico.

After the hike, I treated myself to the mango salad at Ola Lola’s Tiki Bar & Grille, a mint-green, open-air eatery on a narrow, tree-shaded road that became my regular lunch spot. It was the exact kind of bar my 20-year-old self dreamed of opening on a tropical island.

On my last morning in Puerto Rico, I went for an hour-long sunrise walk on the beach in Isabela, on the northwest coast. Aside from a lone jogger’s, my footprints were the only ones in the sand as I walked along the water’s edge, past towering hotels that soon faded into trees. The gently sloping shore was one of the most expansive beaches I had visited, wider than many roads. Every day of my west coast road trip was spent at a different beach, and the island’s large size - about 3,500 square miles - made it easier to escape crowds and find solitude than the smaller Caribbean islands I’ve visited, such as Saint Martin, Anguilla and Saint Barthélemy.

After my walk, I reluctantly climbed in my rental car and drove to the airport listening to Jimmy Buffett. As a beach lover who loathes cold weather, I could envision many more winter trips to the island’s laid-back west coast.

This expansive beach resort offers a variety of spotless rooms that sleep one to six people. Amenities include private beach access, pools, a sand volleyball court and a half basketball court. Kayak and bike rentals available for a fee. If you stay for three nights, the fourth one is free with their year-long promotion. Rooms from about $109 per night.

Located in a colorful town square, this brewery serves up delicious bites, such as burgers and fish tacos, as well as tasty craft brews. Open Tuesday to Saturday, noon to 8 p.m. Bar food from about $9, beers from $5.

The fish tacos from this food truck across from Pool’s Beach are some of the best in town. The owners focus on fresh, local ingredients. Open daily 8 a.m. to 4 p.m. Food about $9 to $12.

The go-to brunch spot in Rincón is a villa on a hilltop that serves up breakfast favorites and mimosas with fresh-squeezed juice. Reservations recommended. Open 8:30 a.m. to noon Tuesday to Friday and 8:30 a.m. to 1 p.m. Saturday and Sunday. Entrees from $10.50.

This mint-green, open-air tiki bar is a great place to grab a drink or a bite after a long day at the beach. Reservations recommended. Open 2 to 9 p.m.; closed Wednesday and Sunday. Cash or digital payment only. Entrees from $9, cocktails from $6.

A bumpy dirt road leads to a parking lot that’s a short walk to the historical lighthouse, which is closed for remodeling. Also accessible by foot. Road open 9 a.m. to 5 p.m. daily, but hours can vary unexpectedly. Free.