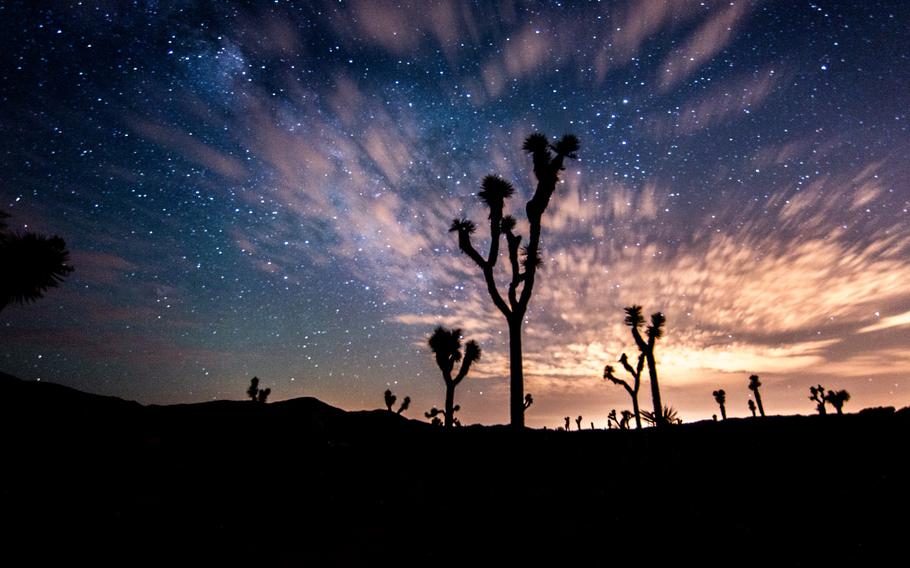 The Ancestral Pueblo people of Mesa Verde, like many communities long ago, were eager observers of the night sky. By tracking the lunar cycles and travels of the stars, they read the passage of the seasons to know when to plant, to harvest and to conduct ceremonies.

They probably would be surprised by what they would see in the sky today - largely because it's not possible to see the stars in most places. Today, light pollution has obscured that starry heritage; 80 percent of North Americans can't see the Milky Way over their homes.

However, that's no longer true at Mesa Verde National Park in Colorado. In recent years, the park has overhauled its lighting system, so that after the sun sets, visitors can experience a naturally dark sky - one swimming in stars, planets and meteors.

In doing so, the park became the world's 100th International Dark Sky Park and part of a rapidly growing collection of locales seeking to preserve and capitalize on their night sky.

"We at Mesa Verde have been thrilled by the excitement of visitors and local community members in recognizing that half the park is after dark," said Spencer Burke, a park ranger.

"This year will have the highest number of designations on record, as we already have 30 certified places, with a few more scheduled for the remainder of 2021," said Ashley Wilson, director of conservation for the Arizona-based association.

Wilson theorizes that the increase in the program's popularity has to do with the presence of astrotourism, a branch of travel that has a disproportionately high economic impact because it necessitates an overnight stay and benefits from the long nights in winter, which is typically the offseason for many tourist areas.

"Visitors need to stay up late to see the stars, which means they will most likely invest in more accommodations, lodging and dining," Wilson explained. "This can especially be attractive to rural communities searching for a new way to boost their local economy based on an existing and pristine resource."

Already, Burke said, he and his colleagues have heard visitors say they came to Mesa Verde, at least in part, to stargaze.

Beyond bringing in dollars to less-visited regions, it spreads the footprint of travelers to popular spots, like Grand Canyon National Park and Joshua Tree National Park, out to a greater swath of the day. Before, visitors might largely come during the same chunk of hours during the day, but now, at least some come at night. While it's far from a shift in the majority, it helps spread out the burden on the landscapes.

Nebraska's tourism board is in the process of applying for the dark sky designation for Merritt Reservoir State Recreation Area, a project started in winter 2018. Although many parks and communities are vying for, and getting approved for, the designation, it's no easy task (Mesa Verde took more than five years). Nebraska's application had people completing a comprehensive lighting survey of all outdoor fixtures; retrofitting noncompliant fixtures, ensuring that all bulbs were 3000 Kelvin color temperature or less and fully shielded (directing light downward); doing several sky quality surveys in the main visitor areas throughout the park at different points in the year; and planning dedicated educational programming related to the negative effects of light pollution on wildlife, ecosystems and human health, as well as how excess lighting leads to energy waste, crime and safety issues, and a loss of human connection to the night sky. 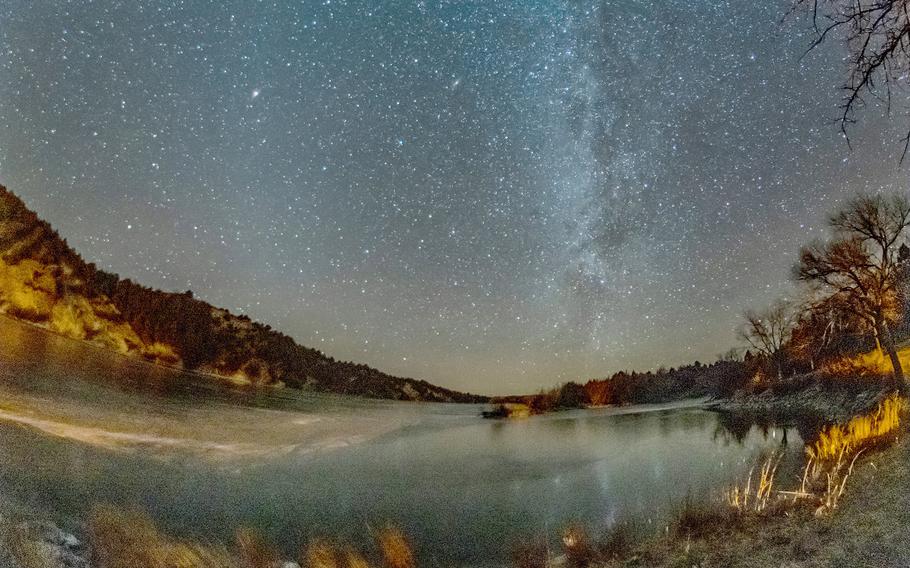 The Merritt Reservoir State Recreation Area in Nebraska at night; the state’s tourism board is in the process of applying for a dark sky designation for the spot. (Justin Haag/Nebraska Game and Parks Commission)

The board is hoping all the work will qualify Merritt for a sanctuary designation, meaning it's one of the darkest places on Earth (15 sites have the designation). However, due to a record number of applications, IDA cannot accept any more until next year, so Nebraska plans to submit its application in the first review cycle of 2022.

"Based on market research from three years ago, we found that, perhaps unsurprisingly, Nebraska wasn't really on anybody's bucket list," said Jenny Bartja, the adventure travel specialist at the Nebraska Tourism Commission. "Our hope is that an award of this kind, from an organization with international reach, will help elevate Nebraska's visibility as a destination."

Although there hasn't been a wealth of research done on the impact of IDSP certifications on tourism, some studies and sentiment surveys show dark skies are increasingly becoming a factor of consideration for people when planning trips. And Merritt has a case study that may show rising traveler interest in dark skies. For the past 28 years, the park has hosted the Nebraska Star Party. The week-long event's activities attract astronomy hobbyists and newcomers to the park, filling its campgrounds as well as hotels in the closest town, Valentine, to capacity. The Star Party, which usually attracts upward of 200 attendees, had registrations surpassing 300 this year, making it one of the strongest years of attendance on record.

Even if the designation doesn't put heads in area beds in the same way the Star Party does, the cause is still worthwhile from a conservation standpoint.

"Dark sky designations are something reasonably within (communities') ability to achieve that has real meaning in terms of environmental protection," said John Barentine, principal consultant at Dark Sky Consulting. "In a world straining under the influence of climate change and other environmental problems, resilient ecosystems are key to healthy communities. Darker conditions on the ground than we see in many cities now would benefit urban wildlife and the biological connections in and near these places, increasing resiliency."

Communities and urban areas are the centers of the greatest concentration of light pollution - we need light at night for safety and enhancing the areas where we live, work and play. However, by using overly bright fixtures that direct light up into the sky, our actions contribute to glare, light trespass and sky glow, which are all types of light pollution, Wilson explained.

"This light pollution does not exist only within the community's boundaries; it branches outward and can be seen for hundreds of miles away from the source," Wilson said. "Sites that were once dark, quiet and pristine are now exposed and susceptible to a shroud of illuminated skies from a source that is out of their control."

In turn, reducing the wasteful use of light helps keep funds in communities in the form of energy savings, lower maintenance costs and longer-lasting fixtures. Tucson, for example, now saves an estimated $2.16 million annually thanks to a project that retrofit its streetlights.

A focus on dark skies is also a way for the parks to connect with their local communities in new ways. Recently, Mesa Verde's team took the park's mobile story lab to area libraries to do presentations of the Dark Sky Park process, Ancestral Pueblo astronomy, and stargazing with professors from the University of Colorado at Boulder.

"More people are becoming aware of our innate and deep-rooted connection with the night sky and acknowledging that connection is at risk of being lost forever if we do not take action to preserve it now," Wilson said. "There can be a balance between nature, our night skies, and our modern way of life. We can keep our view and connection with the universe and contemplate our place in it as our ancestors have for millennia."

You'll be able to see the most stars during a new moon or when the moon is below the horizon (its light can make the stars faint), so plan accordingly. The park recommends stargazing from Morefield Campground, Far View Lodge and scenic overlooks along the park road, including Geologic Overlook, Mancos Overlook, and the Montezuma Valley Overlook. The park is always open, except during emergencies. Many sites, picnic areas and trails are open from 8 a.m. to sunset. Some ranger-lead tours and food and lodging areas are available seasonally, so check the website for availability. Download a map to plan your visit. Entrance fees required; prices vary by transportation mode and time of year. Private vehicle entry for seven days from $20 per vehicle; motorcycles from $15; bicyclist/individuals from $10 per person.

While the stars are good throughout the recreation area, the Nebraska Star Party usually observes the sky from Merritt Reservoir's Snake River Area Campground - a good spot for newbies. Just remember, it can take between 20 and 30 minutes for your eyes to adjust to the darkness, so don't be discouraged if you don't see constellations right away. Download a map to plan your trip. Open all day, every day. Permits required for entry; apply online. Day permit $8 per non-Nebraska licensed vehicle.