Why more hotels are making galleries part of the guest experience 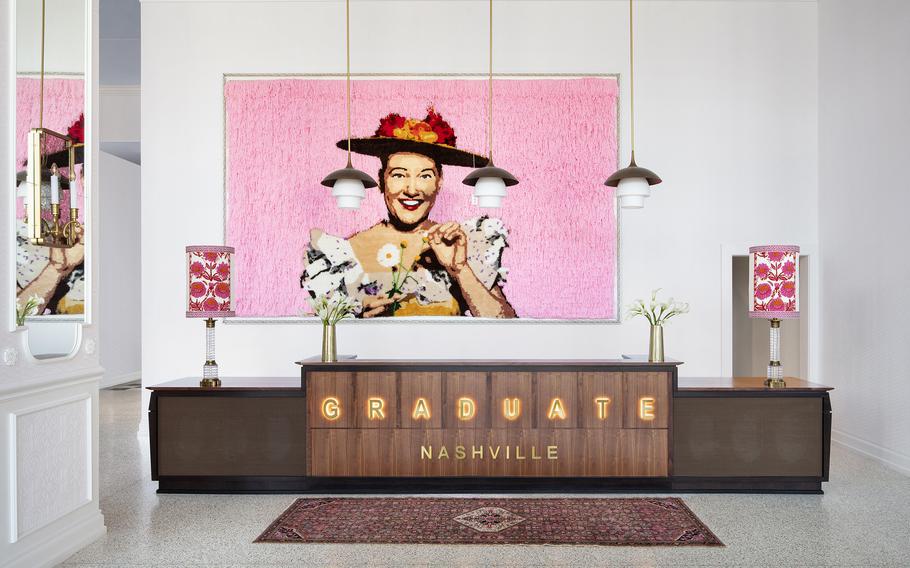 The first thing you notice when you walk into the Graduate Nashville hotel is an 8-by-15-foot portrait depicting the Grand Ole Opry star Minnie Pearl. Although images of country favorites aren’t out of the ordinary in Music City, the medium used for her likeness in this case is. She’s a latch hook rug with a shaggy bubblegum-pink background.

“It’s definitely surprising,” said general manager Greg Bradley. It’s hardly the only unexpected art piece on the property. The art adds a storytelling element to the hotel. Its design is inspired by a fictional female singer-songwriter’s journey trying to make it big in Nashville, from crashing on a friend’s couch (hence the multitude of mismatch, vintage-inspired sofas in the lobby) to the top of the charts (depicted by the all-pink, Dolly Parton-inspired fever dream that is White Limozeen, the rooftop bar).

Though it may seem over-the-top to those used to crashing in hotels where each room features the same mass-produced painting or print, the Graduate Nashville is actually in line with a growing trend. More and more hotels across the country are striving to bring the gallery into the guest experience, in an effort to share and start conversations, to make art accessible, to educate and to inspire.

Many of the art-forward hotels, such as the Art in Denver and the Alexander in Indianapolis, work with local artists to either showcase their portfolio for a specific amount of time or commission one-of-a-kind pieces to display on-site indefinitely.

Lifting local talent has also been part of the lifeblood for Saint Kate, a hotel in Milwaukee. Curator Samantha Timm said that the owners have long been patrons of the area’s art scene and that they wanted to share their passions with others.

“We believe that the arts encourage conversations with others and that everyone should be able to find something that they connect with,” Timm said, adding that her job is to make the art in the hotel fun, exciting and accessible for everyone, including both hardcore fans and casual observers.

Timm said Saint Kate tries to celebrate the visual arts, the performing arts and everything in between. In addition to the permanent collection, found in all public spaces on the first and second floors, six different gallery spaces rotate in new art every three months or so, all of which are free and open to the public. Although there are works from very established artists, such as sculptor Deborah Butterfield, many exhibits are meant to showcase and uplift early-career Midwestern artists, such as current exhibitor Anwar Floyd-Pruitt.

For a deeper dive into the collection, guests can opt to stay in one of the four “canvas rooms.” Each was commissioned to a local artist to decorate as they saw fit. (Lon Michels’s “Leopard Room,” for instance, has floor-to-ceiling animal prints in a multitude of patterns and colors.) Whenever a guest stays in one of the canvas rooms, the hotel donates a percentage of the profits to local art organizations. 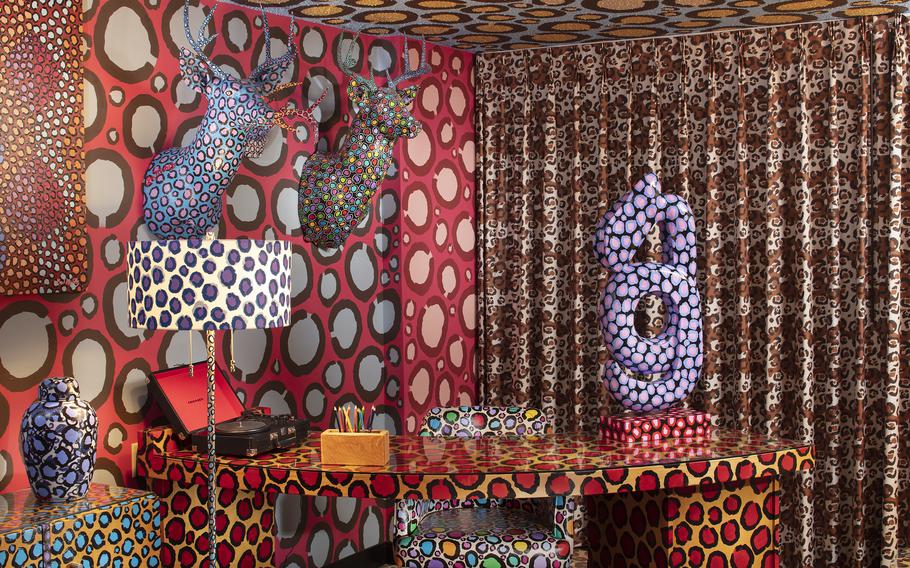 Guests at the Saint Kate hotel in Milwaukee can opt to stay in one of four “canvas rooms,” including Lon Michels’s “Leopard Room.” (Noah Wolf/For The Washington Post)

Although actual museums can carry a hefty price tag, the vast majority of art hotel collections are free and open to the public.

The Aspen Meadows Resort, like Saint Kate, also has curators on staff to oversee the resort’s numerous art pieces within the hotel (including various outdoor sculptures) and help answer questions.

Guests can arrange for a private tour with a curator or take a self-guided tour of the open galleries, as well as the outdoor art installations spread throughout the 40-acre campus in Aspen, Colo., following routes listed in pamphlets available throughout the grounds. (Saint Kate and the Graduate Nashville also have self-guided tours, though theirs are linked to apps.) 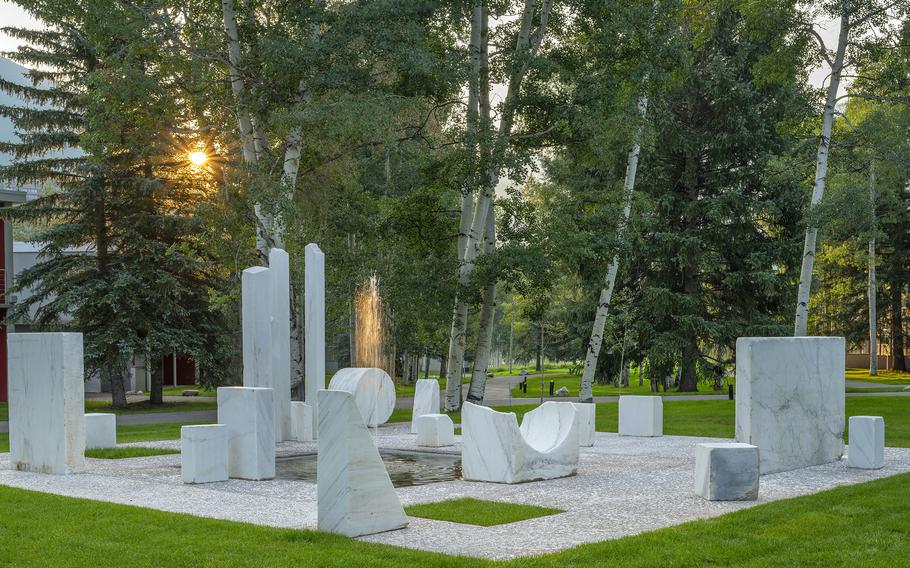 Much of the resort’s Resnick Art Gallery focuses on the work of Herbert Bayer, who also designed Aspen Meadows in the 1950s, whereas the Paepcke Art Gallery displays a rotating collection. Construction is also underway on the new Resnick Center for Herbert Bayer Studies, which is scheduled to open in 2022 and will include 11 galleries spread out over approximately 7,500 square feet.

Other hotels that help make art appreciation more attainable include Hotel Indigo in Santa Barbara, Calif., which serves as a satellite space for the Museum of Contemporary Art, and 21c Museum Hotels. (There are nine of these in the United States, with two more in the works.)

Perhaps what is most notable about the art hotels is that, very often, there aren’t the “do not touch” signs you would see in a traditional museum. (However, that’s not always the case, especially with fragile pieces.)

“When we were coming up with the concept for what the Gordon guest experience would be like, I wanted the hotel to be a place where art could not only be displayed but made,” said Brian Obie, president and principal owner of Obie Companies, which includes the Gordon Hotel in Eugene, Ore. “I believe anyone can be an artist if they just have a chance to tap into their creativity and are given the tools, and sometimes the permission, to sit down and make something.”

One of the ways that manifests at the Gordon Hotel is in the lobby Art Bar. Hotel visitors can create their own masterpieces. The bar isn’t just stocked with Jack, Jim and Jose, but also myriad supplies, such as pencils and watercolors, along with an all-important industrial sink for cleaning up afterward. Similarly, each of Saint Kate’s 200-plus rooms contains a ukulele, a record player and colored pencils.

Also in the lobby of the Gordon Hotel is the large-scale digital art installation titled “The Great Wall.” That installation is actually 21 constantly changing pieces (they’re on television screens) and was undertaken in partnership with the Harmonic Laboratory, an award-winning art collective also based in Eugene. Many of the works displayed were created by art students from the University of Oregon. There are also more than 160 pieces from 84 local artists (along with 75 additional pieces created by Obie Companies employees). Obie said he hopes all these mediums and makings inspire the work of his guests, even if it’s only for the short time they’re within the hotel’s walls. 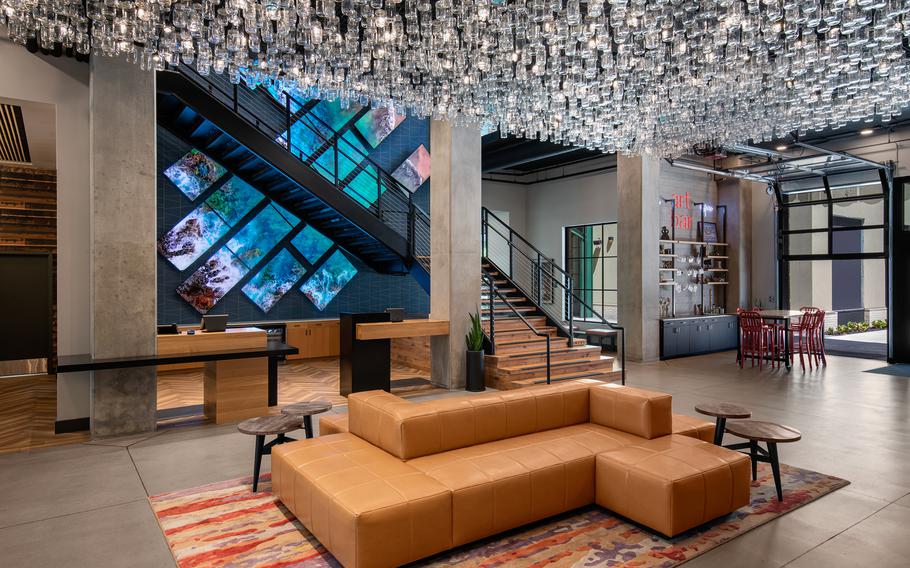 Behind the stairs in the lobby of the Gordon Hotel in Eugene, Ore., is the “Great Wall,” a large-scale digital art installation that was undertaken in partnership with art collective Harmonic Laboratory. (The Gordon Hotel)

“When we’re traveling, we’re often more open to trying new things,” Obie said. “I think having a guest experience that not only shows people art and visually stimulates them but also actively encourages them to tap into their own individualistic expression is important.”