Would going off Google make for a better vacation? We tried it for a day 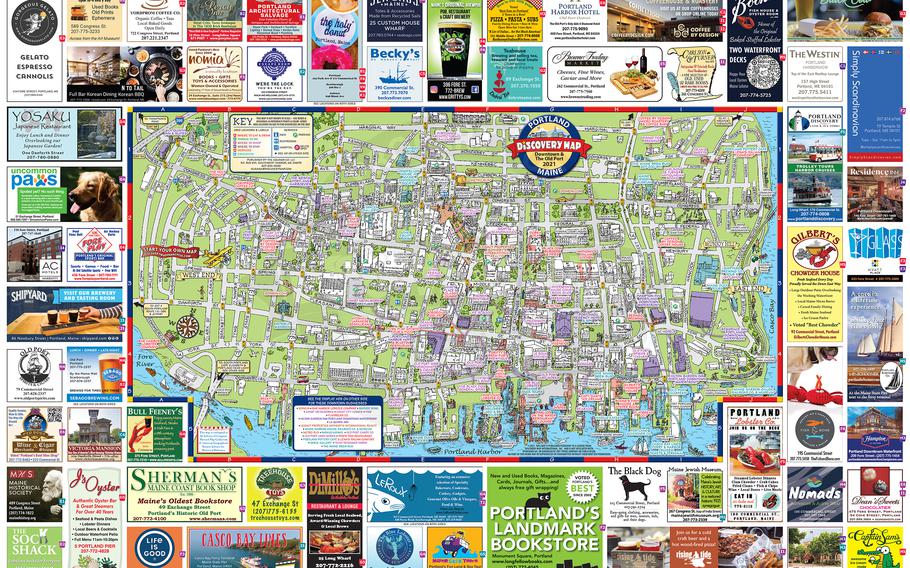 On the first morning of our vacation, I looked up from my phone - and saw my wife on hers.

Before we set off 24 hours earlier, I vowed to go on a tech diet. Since the start of the coronavirus pandemic, I've spent an increasing amount time with my phone, laptop and television. Vacation was the chance to scale back and reconnect with the people who matter to me, especially my wife, Sally.

But there we were in our Airbnb in Portland, Maine, Googling away. I wanted to know how to turn on the fancy countertop range. Sally was looking for instructions on using the old-fashioned espresso maker. Google and YouTube had the answers. But did they have to be such a big part of our vacation?

"Hey," I said, "how about we promise to stay off Google today?"

She looked at me, puzzled.

"Look at us: We're engrossed in our phones, and we haven't even had breakfast," I said. "Let's just take a vacation from Google for one day and see how it goes."

Sally agreed. But if she hadn't already figured out how to brew her cup of coffee at that point, she probably wouldn't have.

We had left Arlington, Va., 24 hours earlier for our first vacation since February 2020. Our goal was to relax and leave our work behind. We stopped in Portland to explore the city and the islands of Casco Bay on our bicycles before heading up the coast to visit friends for eating lobster on docks, unwinding with meandering walks through the Coastal Maine Botanical Gardens, and sitting in deck chairs overlooking the water.

For the drive, we had Google Maps open all day, watching our projected arrival time get progressively later as we ran into traffic. At the start, our estimated trip time was nine hours and change. All was going well until we hit the Bronx. As traffic slowed, the friendly voice of Google Maps announced that the app was redirecting us because of a traffic jam on Interstate 95. It led us into traffic jams on I-84 instead.

We pulled into our Airbnb 11 hours later, not knowing whether Google's artificial intelligence led us astray or bailed us out. We still had enough time to eat gourmet hot dogs and sample some Maine beers on the touristy strip along Commercial Street. On the walk home, we struck up a conversation with a jazz musician outside a club where he had just finished a set. We'd missed his show, but he invited us to a weekly session at a kombucha brewery the following afternoon.

In the morning, we left the car behind and rode away on our bicycles. We decided to bike along Casco Bay on the Eastern Promenade and head inland to ride around Back Cove. We had no set plans aside from making the late-afternoon jazz session. 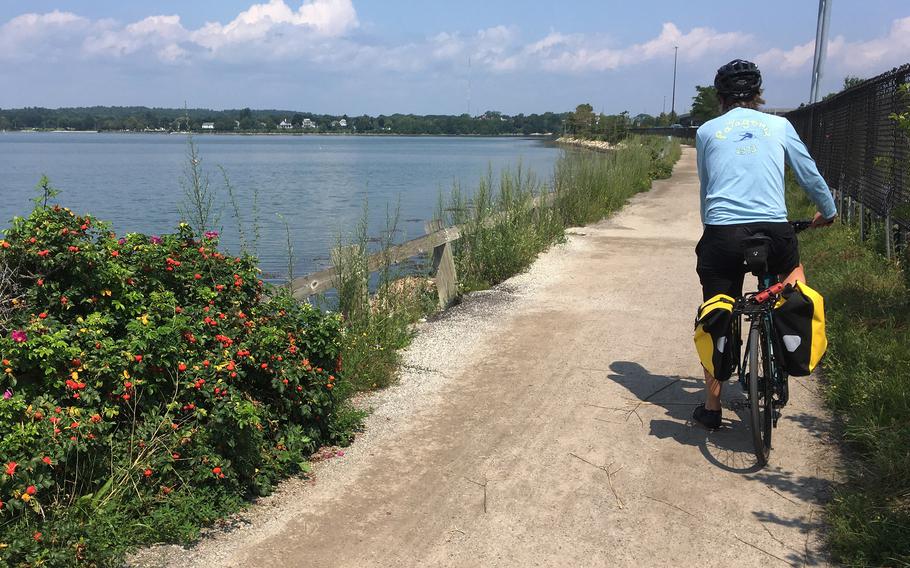 The author gets ready to push off his bike as he heads toward downtown Portland, Maine, from the Back Cove Trail. (Sally M. Davis/The Washington Post)

Without Google Maps to guide us, we took a copy of the city's free Discovery Map, which has illustrations of the streets of downtown on one side and of the city's outer perimeter on the other. It identified several stores and restaurants, and we decided to take a detour off the Back Cove bike trail to get a snack at one of them, Rosemont Market and Bakery.

Finding the Eastern Promenade was easy enough, because we'd been exploring Commercial Street the night before. But getting to the bakery itself almost derailed our experiment.

Once we got to Back Cove, we stopped to plan our route. I held the admittedly limited tourist map, and Sally leaned over my shoulder to look. I noted that the bike path didn't connect to the road that headed directly to the bakery. As I looked for alternate routes, Sally took out her phone and opened Google Maps.

"I thought we agreed we wouldn't be using Google today," I said.

"I thought we couldn't figure this out without the Maps app," she replied.

When we compared notes, we discovered that Google had recommended the same route I'd found on the map. But without consulting Google further, we struggled to get there: Although the paper map got us to the approximate area, it couldn't give us step-by-step directions to the front door. We would have asked for help, but there weren't any pedestrians on the busy road. We did finally stumble upon Rosemont, only to find that it wasn't a retail outlet at all; it was where people baked the goods served at its cafe locations throughout the city.

Turns out we'd also stumbled upon the key to going without Google: Be flexible. Things won't always work out the way you expect them to.

Later, we were reminded that technology can fail, too. After we made it back to town for lunch at Flatbread Company, the hostess took my name and cell number and said it would be a 30-minute wait. The restaurant texted me a link I could use to download its app and monitor our wait time. Rather than hopping on our phones while we waited, we wandered down to the ferry terminal to look at the schedules for the week. I took a picture of the schedule on the video board so I wouldn't have to Google it as we planned the next day's itinerary.

After 40 minutes, we still hadn't gotten a text about our table. I tried to download the app, but the network was overloaded, so I gave up and walked back to the hostess stand. They couldn't find my cell number in the restaurant's computer system. Fortunately, the lunch rush had subsided, and an outdoor table overlooking the dock was ready for us in five minutes.

As Sally and I ate, we discussed our experiment. Even though we'd used our phones to take pictures and text our family, we'd avoided getting lost in them. Once you start Googling, it's easy to go down a rabbit hole. Even a few minutes of that distracts from the purpose of vacation: having a shared experience.

The size of a cellphone is another barrier to shared experience. When one person is using a phone to navigate, it creates a power differential. But when Sally and I looked at our map together, we both had a say in how to go forward. We could each hold one side, and our fingers touched when we pointed to the same spot. You won't have that kind of experience with a small screen.

I also appreciated that abstaining from Google had helped me stay off my phone in the moment. We agreed that the best way to use the Internet was for advance planning, while we were at home and able to set aside time to do research, make reservations and create itineraries. If you have a specific question, Google is almost always better than even the most informed local. Looking for a vegan restaurant? Good luck finding someone on the street to name one, give you directions and tell you whether it's open.

Sally observed that our experiment would not have worked if we had been traveling with our adult sons, who don't appreciate our tendency to wander in search of unexpected pleasures or have much tolerance for wrong turns and dead ends - especially at mealtime.

When we stopped at the Sock Shack to buy a birthday present for our niece, we asked the clerk for directions to our final stop: the jazz session our chance acquaintance had recommended. She told us everything she knew about the venue, the Urban Farm Fermentory, adding highlights about the local music scene. She also knew founder Eli Cayer, who launched the socially conscious fermentery that now produces kombucha, cider, beer, gruit, mead, vinegar and jun with seasonal and locally sourced ingredients. In asking for directions, we had learned more about the city than a turn-by-turn course from Google Maps could ever tell us. 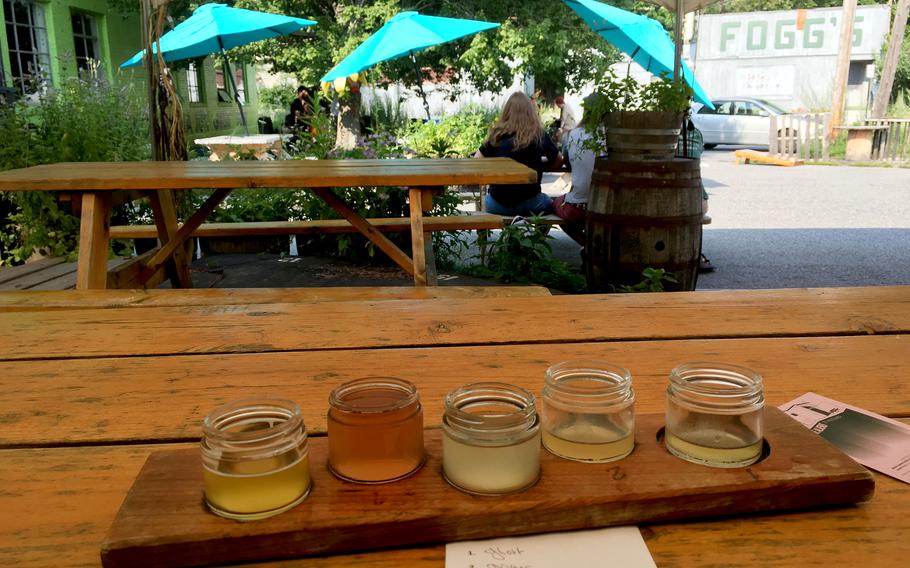 A sampler of kombuchas and ciders at the Urban Farm Fermentory. (Sally M. Davis/The Washington Post)

We wound our way through Portland's neighborhoods, stopping a couple of times to consult our map, which eventually became useless. Even without detailed directions, we knew we'd be close if we found a cluster of breweries. We may not have taken the most efficient route, as we passed buildings such as Portland High School, a stately century-old brick building the length of a city block.

At the corner of Gould and Anderson, we noticed several eateries with crowded patios to our left. We knew we were close, and then we heard live music, faintly at first, then more loudly as we moved toward it. We had arrived.

Ensconced at the fermentory, we settled in under the patio tents and ordered samples of its kombuchas and ciders. As we enjoyed the live music - something we'd both missed during months of isolation - we reflected on our day. The weather had been perfect. We'd met interesting people. And despite our missteps, finding our own way had been more satisfying than following directions from our phones.

Would we continue the experiment? Nah, but we'd think twice before pulling out our phones to ask Google for solutions.