Trail builders pave the way for thrilling treks in nature

by
Christine Negroni
• Special To The Washington Post • September 22, 2021 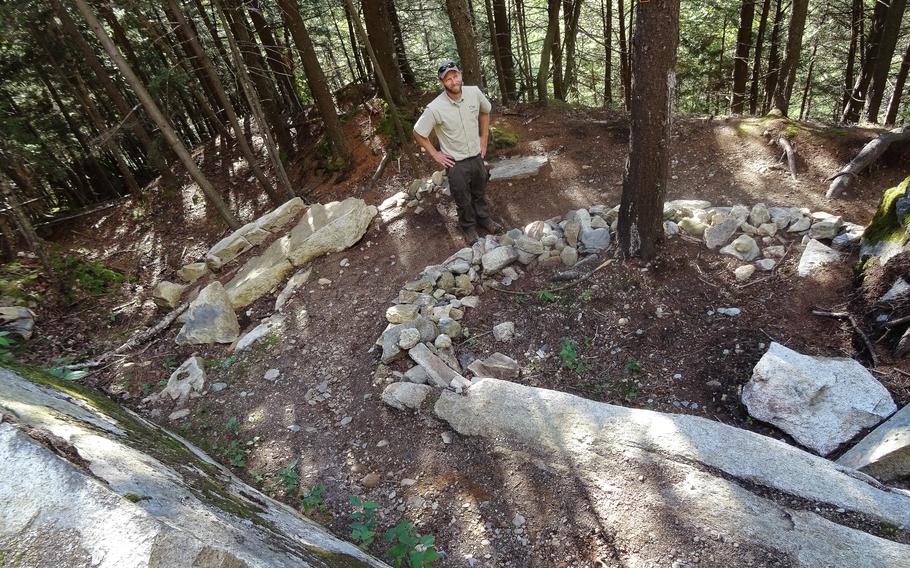 You don’t see them as you kick through the leaves on your hike. You won’t see them as you squeeze through an inviting crevice between two boulders to discover what’s beyond. Don’t look for them as you pedal toward a perfectly placed berm or you may tumble off your bike. Just know that the people responsible for the thrilling ride and the beckoning passageway, the people who plan where you will step and what you will view - they see you. These trail workers are the unseen architects guiding your interaction with the great outdoors.

In North America, trail designers and maintainers come from public and private groups, government agencies and community programs, and sometimes, they’re simply private landowners. Combined, their work over the past century has resulted in nearly 200,000 miles of trails on federal lands alone as of 2015. That is four times the mileage of the American interstate highway system.

“They are weavers when they weave a trail around this rock and that tree and over that hill,” said Erik Mickelson, an independent trail consultant who hosts Trailism, an informational website for trail users. “They are sculptors when they carve a long, drawn-out, twisty bench from dirt or masons or exterior designers in the way they move or shape stones just so.”

Mont-Mégantic National Park in Quebec is known for its all-season trails and spectacular views of the 3,000-foot peaks of Mégantic and Saint-Joseph.

When infrastructure and conservation manager Camille-Antoine Ouimet set out to design the park’s newest Des Escarpements trail a few years ago, he wanted to focus not on the grandiose, but on the mountains’ wide variety of microenvironments. The rock-hewn multilevel path begs hikers to linger at every turn. It was at a point where the trail squeezed me between two boulders that I started to wonder: Who designed this?

“The main feature,” Ouimet told me, “was all these little cliffs and rocks and the diverse terrain which creates a feeling of being on a big mountain but also with an intimacy with this forest and assemblage of rocks.”

“The diversity of the place was a blessing for the experience, but it was a big challenge,” Ouimet said. Upon discovering a protected species of fern, for example, Ouimet had to alter the path’s route to make sure hikers didn’t affect the plants.

An important part of trail work is indulging our love of nature while making sure we do not smother it with ill-advised affection. So, if the hard work Alexa Sharp puts into her job as leader of an all-female maintenance crew in the Southeast Conservation Corps working in Kentucky’s Daniel Boone National Forest goes unobserved, Sharp, 27, is OK with that.

“People go to these places to be in a space that is as natural as possible, to find peace in the natural world,” Sharp said. “It’s not about us as trail workers leaving our mark or anything like that. It’s about respecting the place and leaving it how we found it - but just a little bit more maintained and taken care of.”

Trail usage has increased threefold in the United States since the coronavirus pandemic hit in early 2020, according to data from AllTrails, a provider of crowdsourced information on trails of all kinds. Even before that, tens of millions of Americans were enjoying a trail system that was kick-started in 1965, when President Lyndon B. Johnson told Congress that hikers, those on horseback and bike riders were “forgotten outdoorsmen.” “For them,” he said, “we must have trails as well as highways.”

Still, all those explorers can’t help but affect the environment - and not always in a good way.

“There’s a double-edged sword when you create a trail,” said Kathryn Kolb, executive director of the Atlanta-based environmental group EcoAddendum, which has as its mission teaching good stewardship of wild places.

“Green space is positive, wonderful for public access. The problem can be if that public access is done in a way that is harmful to the exact resource that they are trying to enjoy.”

Overuse can “degrade the ecosystem and introduce invasive species,” Kolb said. An afternoon spent with a dog in the woods seems bucolic, but it may not be so pleasant for the wildlife whose living spaces were tromped through.

This is why building trails involves complex and interlocking decisions intended to minimize the path’s environmental effect while maximizing user experience. Once a trail is built, maintainers deal with flooding, erosion and problems created by humans, who have a pernicious tendency to wander off a trail and muck about in fragile forest understory.

“It’s like an ongoing battle,” Firme said. “Land managers are trying to figure out how to mitigate it.”

Lynn Cameron was a 31-year-old research librarian at James Madison University in Harrisonburg, Va., when she started hiking the AT 40 years ago. It wasn’t long before she and her husband, Malcolm, started volunteering to care for trails in the George Washington National Forest and on the AT.

They would trim back vegetation and clean out the ditches built to divert water away from the trail. But her favorite job was clearing fallen trees.

One day, her four-person crew hiked three miles into the woods toting a crosscut saw.

“Two of us were sawing and my husband said, ‘Hey guys, there’s a rattlesnake on this log.’ We all stopped and looked, and there he was in a cavity.”

Cameron said the crew continued the work, but the up-close look at the rattler thrilled her. It was something she would only have experienced as a trail maintainer.

“If we were hiking through there, we would not have seen it, let alone spent an hour in her or his company,” she said.

There was a time when a story like that would have made Joseph Dobbins queasy. A 26-year-old from Dyersburg, Tenn., Dobbins joined one of the nation’s many youth conservation corps, which are modeled on the 1930s Civilian Conservation Corps established by President Franklin D. Roosevelt.

Back then, about half a million young men worked in forests, camps and on trails, according to the CCC Legacy website. The program ended around the time World War II began.

The various state and regional conservation corps that have started since operate along the same lines as the CCC and rely on young people looking for a challenge. In California, recruits are promised “hard work, low pay, miserable conditions, and more” on the homepage of the corps website. Trail workers travel deep into the woods, stay in tents for weeks on end and sometimes are supplied only by what can be carried in.

This kind of life was completely foreign to Dobbins when he started trail work in 2019.

“I didn’t know what to expect. I knew I would be outside all the time, but I wasn’t mentally prepared to sleep in a tent, have a hand-washing station or poop outdoors. At first, I said, ‘This is too much.’ “

As a leader of the Blue Ridge Parkway Black, Indigenous and people of color crew, Dobbins has come to appreciate an outdoorsman’s life. He takes pride in knowing the effect he and his co-workers have on someone else’s nature hike.

“We definitely design trails to go around big trees, boulders, a stream. If you deviate from the path, it takes you away from the experience we want you to have,” he said.

Not every trail creator needs a big budget or an army of volunteers. Debra Pearson of College Park, Ga., entered the world of nature trails quite unexpectedly.

The 70-year-old retired schoolteacher lived in a house with a half-acre of natural growth forest in the backyard, but she confesses that she didn’t think much about the trees until her neighbor sawed down the ones in his yard. At the time, Pearson said, the neighbor thought the trees were diseased and dying. Pearson asked an arborist for an opinion and said that assessment changed her life.

She was told she had a thriving and biodiverse forest on her property, so she built a small trail through her newly discovered treasure.

“I appreciated the tree canopy, but in 2014, I could not distinguish one tree from another,” she said. Unprompted, she then ticked through the names of trees, bark structures, and flowers and plants thriving in her backyard. “It’s been such a lovely ride, a lovely evolution.”

Over the past decade, Pearson has hosted forest camps and art installations. The neighborhood children have built more trails. Now, she does as trail workers everywhere do: She welcomes others to visit and enjoy.