On Blue Ridge Parkway, autumn is for reds 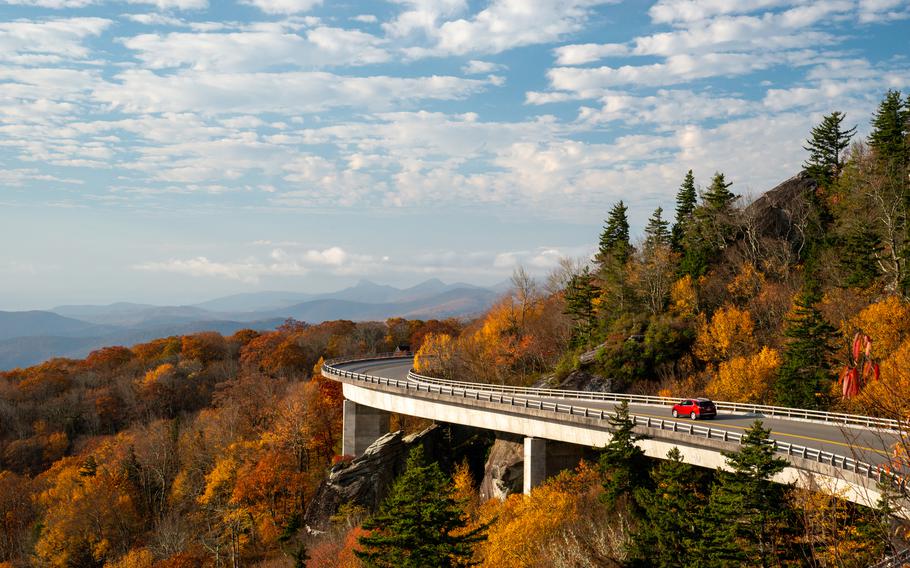 The Linn Cove Viaduct - an S-shaped elevated roadway that hugs the side of Grandfather Mountain in North Carolina - was one of the last portions of the Blue Ridge Parkway to be completed. The structure is a National Civil Engineering Landmark. (Anna Mazurek/The Washington Post)

With more than 100 species of trees, the Blue Ridge Parkway is a prime spot for a fall getaway and leaf-peeping. The 469-mile roadway passes through six mountain chains in the Appalachians in Virginia and North Carolina. Operated by the National Park Service, the parkway is a planned landscape, unlike most national park areas. In 1933, President Franklin D. Roosevelt initiated a plan for a "park-to-park" highway to connect Shenandoah National Park to Great Smoky Mountains National Park. Construction started Sept. 11, 1935, and was completed in 1987.

The parkway's 45 mph top speed limit allows visitors to slow down to enjoy the scenery. There is a plethora of opportunities to get out of the car and hike the parkway's 369 miles of trails, along with places to bike, camp and explore cultural sites. Due to efforts to preserve historical structures, including log cabins and railways, the scenic roadway is considered a museum of the American countryside.

"We usually tell folks to expect peak leaf color in mid-October," says Amy Ney, communications coordinator for the Blue Ridge Parkway Association, the marketing partner for the parkway. She adds that multiple factors can affect the timing of the leaves changing.

The parkway's elevation, which ranges from 670 feet to 6,053 feet, is one of the main indicators. "Leaves start turning first at higher elevations and on the northern slopes," Ney says. "So the lower elevations and drier southern slopes experience fall color change later. The amount of rainfall, daytime sunshine and nighttime temperature also add to the equation, and fall storms can often blow the leaves right off the trees."

She recommends that travelers visit a long section of the parkway with a variety of elevations: "Any trail or overlook that has a long-range view will be great in fall, because you can see foliage at different elevations and have a greater opportunity to see fall color in some level of progression." Elevation can change dramatically in just a few miles. From the lowest portion of the parkway at the James River in Virginia, the elevation increases nearly 3,300 feet over a 13-mile distance to Thunder Ridge.

How to avoid crowds

During the pandemic, the Blue Ridge Parkway was extremely popular, with 14 million visits in 2020, the highest number in the national park system. "Weekdays and early in the day are both good options to avoid crowds," Ney says. "But I also recommend looking for less-busy places along the parkway, like Wigwam Falls," near Montebello, Va.

She also suggests starting a trail in an atypical location and downloading the Blue Ridge Parkway Association's free travel planner app. The app works offline for Android and iOS devices, and it provides a detailed list of attractions and services.

The parkway is divided into four regions, and all sights are labeled by numbered mileposts starting near Waynesboro, Va., and ending in Cherokee, N.C., with limited entry and exit points.

To assist with travel planning, the Blue Ridge Parkway Association website and free app offer a detailed guide of each of the four regions, with interactive maps, and include lodging information for nearby communities. Along the parkway, there are two lodges, Peaks of Otter Lodge and the Pisgah Inn, and several campgrounds.

Two sections of the parkway are closed for construction near Roanoke and combined into one detour. The road is closed from Milepost 112.2 to 115 and Milepost 121.4 to 135.9. A list of all road and facility closures can be found at nps.gov/blri, as well as regulations about masks and occupancy limits for indoor spaces.

Here are some of the most photogenic spots for fall foliage, organized by region from north to south:

In the 1840s, a rock-formation landmark guided wagons over the Howardsville Turnpike. This rock outcrop, known as Humpback Rocks, is a popular hike and provides views of the Rockfish and Shenandoah valleys. To avoid crowds, consider starting your hike on the Appalachian Trail from the Humpback Rocks Picnic Area (Milepost 8.5) rather than at the busy Humpback Rocks trailhead (Milepost 6). At Milepost 5.8, there's a visitor center and an outdoor farm museum with a late 19th-century log cabin and outbuildings.

One of the lesser-known photography spots in the Ridge Region is Yankee Horse Ridge, the site of the Irish Creek Railway, a logging railroad that operated from 1916 to 1939. Part of the narrow-gauge track has been reconstructed near the overlook of a small stream. A 0.2-mile trail leads to Wigwam Falls, one of the easiest waterfalls to access between Waynesboro and Roanoke. Although the waterfall is small, it's tucked into a hemlock forest and is extremely photogenic. Picnic tables and a large parking area make this a great rest stop.

Rocky Knob is one of the more rugged areas of the parkway with four major hiking trails, ranging in difficulty from the strenuous 10.8-mile Rock Castle Gorge Trail to an easy one-mile loop at the picnic area. The 4,800-acre area includes a campground and visitor center.

One of the most-photographed spots on the parkway is Mabry Mill, built in 1908 by Ed Mabry, an entrepreneur who built and operated it for 25 years. The site overlooks a pond and includes a sawmill, wheelwright and blacksmith shop, along with a two-story house. The best time to photograph the mill with the reflection in the pond is roughly an hour before sunset.

The Linn Cove Viaduct - an S-shaped elevated roadway that hugs the side of Grandfather Mountain in North Carolina - was one of the last sections of the parkway to be completed. The 1,243-foot-long viaduct was delayed for 20 years while officials struggled with how to build a road at 4,100 feet without damaging the environment. The structure is now designated as a National Civil Engineering Landmark. To reach the viaduct, which is best photographed in the morning, park in the lot at Milepost 303.9, then follow the trail that parallels the outer edge of the guardrail to the start of the viaduct. For an elevated view, cross the road and climb the large rock, where photographers will probably be gathered.

The headwaters of the Linville River begin at Grandfather Mountain and form the tiered Linville Falls, which plunges into Linville Gorge, known as the "Grand Canyon of the Southern Appalachians." The two main hiking trails lead through a hemlock forest mixed with white pine, oak, hickory and birch trees that cover the trails with a colorful blanket of leaves every October. There are four miles of trails; the best views of the falls are from the Chimney View and Plunge Basin overlooks.

This high-altitude portion of the parkway has two short but beautiful trails located a half-mile apart. Due to the harsh environment, both trails are lined with twisted and gnarled trees. The 0.7-mile Craggy Pinnacle Trail leads to a panoramic 5,892-foot viewpoint, while the Craggy Gardens Trail leads through the forest from the visitor center to a picnic area with a short spur trail that offers views of the nearby town of Montreat and the Black Mountain Range. Even if the weather is clear at lower elevations, fog and clouds can obstruct views on both trails.

Towering at 6,684 feet, Mount Mitchell is the highest peak in North Carolina and the Eastern United States. The mountain is located in a 1,855-acre North Carolina state park and is accessible only from the parkway via a state highway. Visitors can hike or drive to the observation deck for 360-degree views. The expansive picnic area at the top is a wonderful lunch spot to socially distance.