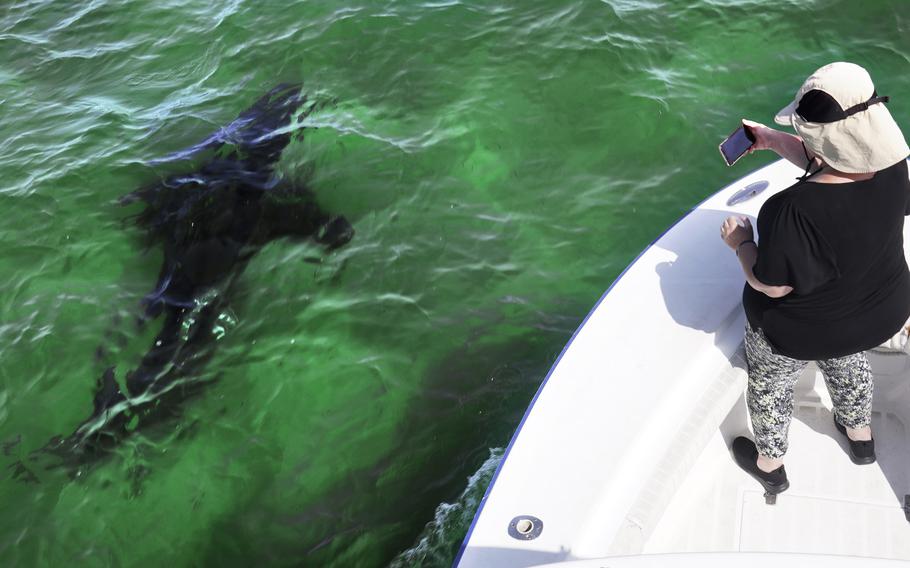 There’s no ominous music, no telltale fin breaking the surface as the powerful silhouette of a great white shark glides alongside the small tour boat off Cape Cod in Massachusetts.

Michael Simard crouches low and points a finger in the direction of the roughly 10-foot (3-meter) predator cruising in the glassy water below.

The 48-year-old construction foreman from Cambridge, Massachusetts, glances back at his partner, Penny Antonoglou, who dutifully pulls out her smartphone while he holds the pose. Smile. Click.

“It’s awe-inspiring, really,” Simard said after the tour, where they spotted at least six great whites. “I didn’t realize how graceful they were. It does put it into perspective that this is their element, and we just share it with them.”

A small but growing group of charter boat operators are offering great white shark tours in a region where whale and seal watching excursions have long been a tourist rite of passage.

The Atlantic White Shark Conservancy, a prominent nonprofit shark research organization, is among those that have jumped into the shark ecotourism game. It's also renovated its Shark Center, a family-friendly museum showcasing its research into the local shark population, and is building another educational outpost set to open next summer in the bustling tourist center of Provincetown.

Elsewhere, local shark-themed merchandisers are reporting brisk businesses, even as the coronavirus pandemic has disrupted parts of the region’s tourism industry. Cape Cod hosts about 4 million visitors a year, who bring in more than $1 billion in tourism spending and support thousands of jobs.

“It feels like we’re on the trajectory of it being a point of pride for Cape Cod,” said Patrick Clarke, owner of the jewelry company Cape Clasp, of the region’s white sharks. “A lot of the initial fear and hysteria was the fear of the unknown, but we’re learning more and more about them every year.”

Clarke makes a range of jewelry featuring whales, turtles and other marine life, but says the shark-themed pieces — specifically a bracelet made from marine-grade cord held together by a great white shark-shaped sterling silver clasp — are consistently his top sellers.

In Chatham, a hub of the local shark tourism industry, a company that started selling popular stickers of Cape Cod in the shape of a great white shark some seven years ago has taken off as the local shark population has also come into its own.

Kristina Manter says Cape Shark, the apparel company she co-owns with her boyfriend, opened a brick-and-mortar storefront on Main Street last summer to sell a range of hoodies, sweatpants, T-shirts and other clothing adorned with the logo.

“We’re not just popping up because we saw the tourism. We’ve been around because we’ve loved the sharks and believed in their conservation,” Manter says. “It just kind of fell together perfectly.”

There’s no definitive tally for how much shark-related tourism contributes to the roughly 65-mile (105-kilometer) peninsula's economy, but its growth is helping stretch the tourist season into the fall, as peak shark sightings happen in August and September, says Paul Niedzwiecki, CEO of the Cape Cod Chamber of Commerce.

Indeed, dozens of beaches have temporarily closed in recent weeks after sharks were spotted as close as 30 feet (9 meters) from some of the Cape's most famous stretches of sand. Shark researchers say they expect to be out tagging and observing the predators into November, if the weather permits.

“Several years ago, there was a concern that it might have a negative impact on tourism,” Niedzwiecki said. “But we’ve been working to educate people about sharks and what we’ve actually seen is no negative impact.”

“There’s always been sharks, but there hasn’t always been the opportunity to interact with sharks in this fashion,” said Bosley, whose Dragonfly Sportfishing started offering shark tours in earnest this summer in between its regular fishing and whale watching excursions. “They’re part of our ecosystem.”

Since the 2018 attacks, Cape officials have invested in better training and equipment for lifeguards and first responders to keep beachgoers safe as great white sharks migrate in ever larger numbers to feast on the region’s bountiful seal population.

But a group of concerned residents, vacationers and other advocates have formed a nonprofit to push for more sophisticated and proactive shark safety measures, such as undersea detection, land-based warning systems and drone surveillance.

Local surfers, meanwhile, have taken to arming themselves with shark repellents, including personal devices that emit electrical fields that supposedly deter but don't harm sharks.

Concern about great whites is growing elsewhere in New England, especially after a New York woman was fatally bitten by one in Maine last July, becoming the first person to die by shark attack in the state. Dozens of marine organizations and state agencies from Rhode Island to Canada formed a consortium to collaborate on shark research in response.

Greg Skomal, a state marine biologist currently studying the hunting patterns of the Cape's great whites, says shark tours could prove beneficial, so long as they continue to be done responsibly.

There are currently no licensing or registration requirements for the tours, but those and other regulations should be considered if more join the fray, he said.

The state banned the use of bloody chum, decoys and other bait to lure sharks in 2015, meaning the kinds of shark cage diving operations that are common in Australia, South Africa and other shark-rich destinations aren’t allowed in Massachusetts waters, unless they’re more than 3 miles (5 kilometers) offshore, where state jurisdiction ends.

But it's a relatively costly outing: The nearly three-hour tours, which rely on an overhead “spotter” plane to locate sharks, range anywhere from $1,600 to $2,500 per boat, and the vessels typically carry six passengers at most.

Antonoglou, a 47-year-old civil engineer, says the eye-opening experience is worth the expense.

“When people think of great whites, they think of ‘Jaws,' but it’s not like that at all,” she said. “It’s pretty cool that we know they’re out there. The populations are thriving, and I think it’s a great asset for the Cape.”