Chincoteague: Just a pony paradise? Neigh, it's much more.

by
Nevin Martell
• Special to The Washington Post • September 2, 2021 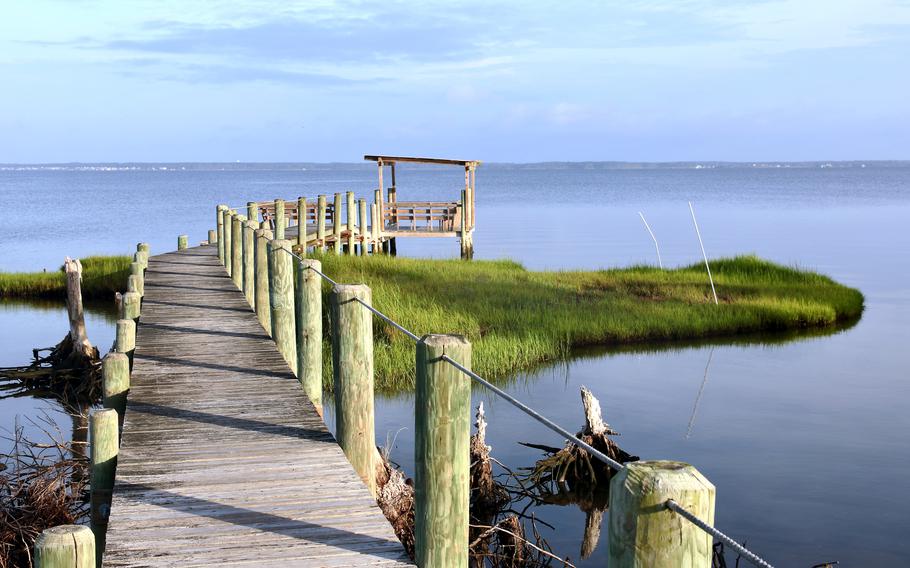 Chincoteague Bay stretched before me, golden flecks of sunlight glinting off its smooth waters. In the distance, the Virginia mainland stayed low to the ground, a dark green strip underlining a pale lapis blue sky, empty except for a few shreds of cotton candy clouds. It was pure peace, and it was our view for the next week.

My wife, 8-year-old son and I had rented a house with friends on the quiet northern end of Chincoteague Island perched off Virginia's Eastern Shore. A long wooden walkway wended its way from our front porch to a partially covered dock in the bay. By the time we got there, our friends already had crab traps in the shallow waters and had dug up palm-size clams from the sandy bottom, earning enough fresh shellfish to fuel several meals. Soon enough, the elementary-school-age children on our trip would be in the water, playing a freewheeling maritime version of King of the Mountain with a paddleboard. There wasn't a wild horse in sight.

When most people think of Chincoteague, they think of its fabled mares and stallions galloping through its marshy, wild lands and grazing along its shoreline. Sometimes, they are fondly reminded of Marguerite Henry's 1947 children's book, "Misty of Chincoteague," a tender tale that popularized the origin story of the horses surviving a Spanish shipwreck (perhaps more convenient myth than historical truth) and the tradition of their annual roundup and auction, which continues to this day, though the auction has been virtual the past two years because of the coronavirus pandemic. However, the island is so much more than the horses, a tranquil and tantalizing getaway only about a 3 1/2 hours' drive from D.C.

Seven miles long and just about 1 1/2 miles wide, Chincoteague boasts roughly 2,900 permanent residents, but the Chincoteague Chamber of Commerce estimates that four or five times that number of visitors are on the island during the height of the summer tourist season. After Labor Day weekend, though, those numbers drop precipitously, except in October, when hordes flock back for the annual Chincoteague Oyster Festival. Generally, the tourist season starts in the spring and doesn't end until the late fall, and many of the island's attractions are fully open throughout that time.

The slender slip of an isle is dotted with one- and two-story homes, mostly painted in demure natural colors: windswept sand, dusky gray, pale robin's egg blue. These usually belong to locals, and some are available to rent. There are also lots of newer residences built specifically with visitors in mind. Either way, travelers have plenty of lodging options, because there are also plenty of inns and motels, many with sea views.

To get a quick history lesson on the area, stop at the Museum of Chincoteague Island, but save your visit for a rainy day, and don't plan on spending more than an hour there. The compact exhibition space brims with artifacts and information on the Assateague Lighthouse, the first colonial settlers and the Native Americans who were there before them, the oyster industry and, of course, the Misty legend. In a separate building, there's a re-created woodworking shop of a famed local duck decoy carver. 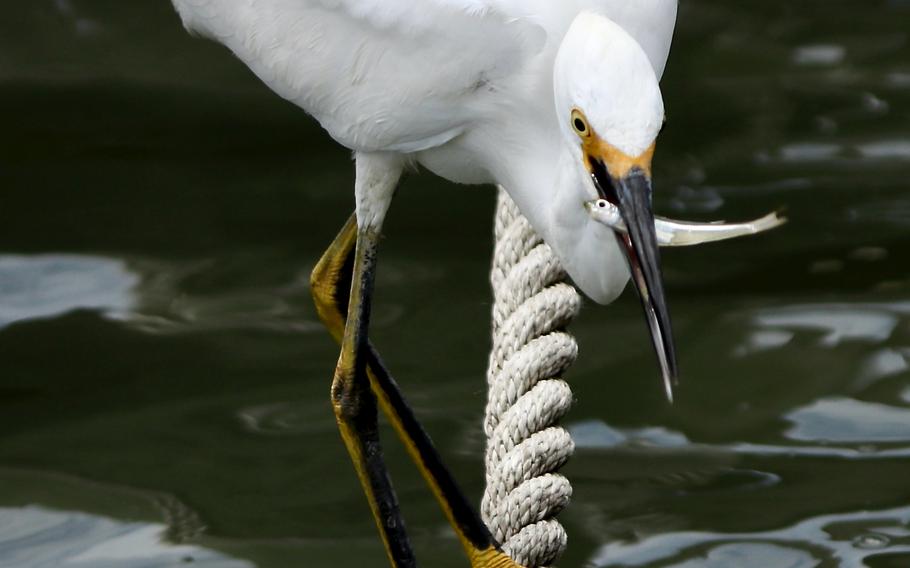 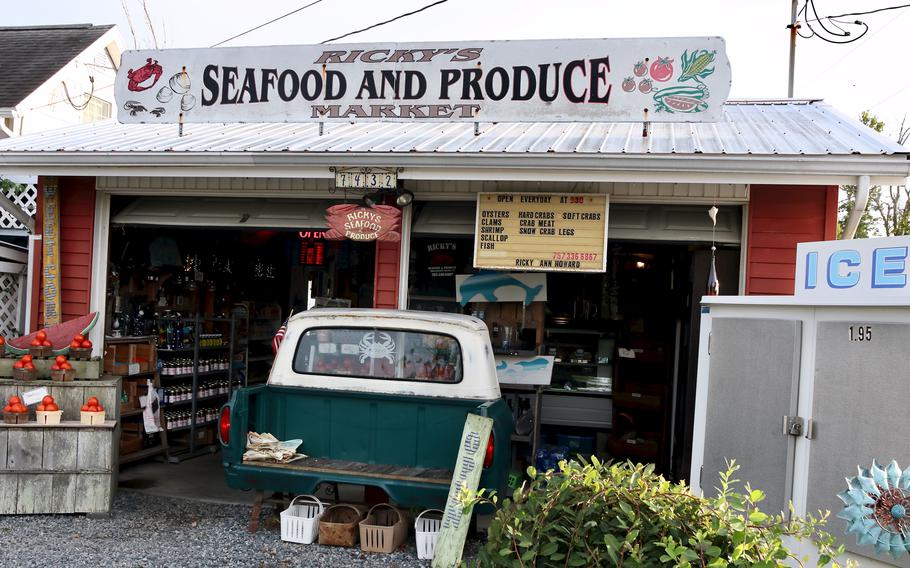 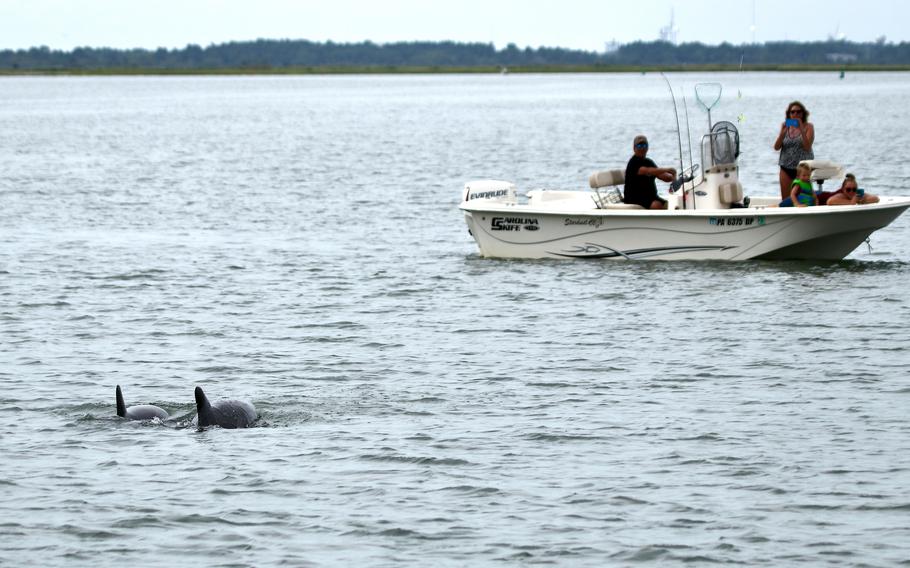 It's best to get groceries on the mainland, where you'll have a greater selection. However, if you do need something offshore, Island Foods has most staples, while two produce markets, Church Street Produce and Whiteraven's Nest, carry a limited variety of fresh vegetables, fruits, herbs and locally produced foodstuffs. Want seafood? Drive about 15 minutes off the island to Ray's Shanty, which sells just-caught fish and shellfish. Trust me: It's worth the trip. If you'd rather eat out, stop at Ricky's Seafood and Produce for a soft-shell crab sandwich or Poseidon's Pantry for a gourmet sandwich, then go to Island Creamery for ice cream.

Those seeking quietude - like we were - should stay away from the main drag. Driving onto Chincoteague, Maddox Boulevard unfurls across the island's midsection. This strip is overpopulated with tourist traps, such as mini-golf courses, scooter rental spots, souvenir shops and eateries. Ignore your GPS and explore the side streets, which will help you circumvent traffic and the gaudy clamor. You'll find that, no matter where you go, people drive slowly, often below the already low speed limit of 25 mph. Don't try to pass unless someone pulls over to let you by. Remember: You're on island time. And where do you have to be that you must drive so quickly, anyway?

Chincoteague is cozied up alongside the slender 37-mile-long Assateague, a barrier island running up Virginia's and Maryland's coastlines. It's home to the Chincoteague National Wildlife Refuge, an epic preserve of more than 14,000 acres that the horses call home. Though camping is allowed, there are no hotels or homes for rent there.

Extending across the horizon at the end of the refuge's access road, Assateague Beach is a gem. No matter how many people were there, it was never difficult to find parking or a socially distant place for ourselves. The water was warm, the surf just rowdy enough to playfully tumble the kids. There are shells and some sea glass to be found along the shoreline. The best time to go looking is after a storm, when the ocean tosses up all sorts of unexpected treasures.

The refuge is a paradise for birders. Since tallying began in 2008, more than 300 species have been spotted there. Its Woodland Trail and Wildlife Loop are both popular hikes for bird nerds. It's common to see multiple duck and heron species, bald eagles, ospreys and an array of songbirds. Put on bug spray before you go out. The islands can be beyond buggy, especially early in the day and in the evening. Use industrial-strength repellent made with picaridin or DEET. The natural alternatives just don't pack enough punch.

Many days, an afternoon trip to the refuge's beach was our only goal. One morning, we did an obligatory pony-focused tour with Daisey's Island Cruises. Not only did we get within mere yards of the horses, but we also saw bottlenose dolphins and a bald eagle, and we got a quick rundown of the island's history.

On our last day, we booked seats on Captain Barry's Back Bay Cruises, a hands-on tour of the waters and marshlands off the island's western coastline. It rained shortly after dawn, leaving the skies an ominously gunmetal gray, but the pontoon boat tour was still a go. We arrived at the dock to find our guide raring to go. Dressed in well-worn white shorts and a dark hoodie with a brimmed gray hat atop his shoulder-length white hair, a hawkish nose stuck out over his scraggly circle beard. It took only a second to realize Captain Barry was a character.

Actually, he was several characters, pitched somewhere in between a fast-talking educator who seamlessly switched from lecturing to hectoring, a piratical space case who wouldn't be out of place hawking tickets in the parking lot of a Phish concert, and a bar-stool philosopher whose no-frills pronouncements focused on why people, but especially kids, need to stop looking down at their screens and start looking up at the natural world. In short, he was engaging, educational and esoteric beyond the sixth degree - an utterly delightful tour guide.

At first, our son, Zephyr, was grumpy and unenthusiastic. Slowly, though, Captain Barry got them excited. There was a stop to do some shelling for materials for their future art projects. Then Zephyr plucked periwinkles from marsh grasses and watched them unfurl, looking like alien snails. They got to touch a beached jellyfish before dragging a net through the water to capture a glistening, flip-flopping mass of minnows. The last stop was a crab trap, where they learned how to hold a blue crab by its rear paddle fins so it couldn't pinch them.

With each new experience, Zephyr was more and more excited. When Captain Barry announced we were heading back to the dock, Zephyr began good-naturedly booing. "No, no, the tour should be longer," they demanded. "That was so fun," Zephyr gushed as we piled back into the car. "Can we come again next year?"

"Sure," I agreed. We were all already looking forward to coming back to Chincoteague for more idyllic calm - and another spin around the bay with Captain Barry.

The beloved roadside stand's best offerings are its no-frills fried soft-shell crab sandwiches and fried seafood baskets with a choice of hush puppies or fries. Open daily 9:30 a.m. to 7 p.m. or until food runs out. Sandwiches $8, baskets from $12.

It might be best to peruse the store's colorful flavors online before going in, because there's a lot of them, including several vegan options, and people in line have no patience for wafflers. Open daily 11 a.m. to 10 p.m. Cones from about $3.

Walk in or drive through at this island mainstay, which offers classic coffee and espresso drinks alongside Vietnamese iced coffee and milk teas, as well as plenty of fresh pastries. Open daily 7 a.m. to 5 p.m. Drinks from $2.45, pastries from $2.95.

A small but solid selection of gourmet groceries, including condiments, cheeses, drinks and small nibbles, are complemented by some of the best sandwiches on the island, including a generously packed Italian hoagie and several plant-based options. Open Wednesday to Sunday 10 a.m. to 5 p.m. Sandwiches from $7.50, sides from $3.50.

The sprawling park of more than 14,000 acres includes a primo beach, plenty of hiking and biking trails (don't forget bug spray), many birdwatching opportunities and the Assateague Lighthouse. Open daily 5 a.m. to 10 p.m. May through September, 6 a.m. to 8 p.m. April and October and 6 a.m. to 6 p.m. November through March. All pets prohibited. Day pass $10 per car, week pass $25 per car.

The compact exhibition space brims with artifacts and historical information on the island's inhabitants, the oyster industry and the Misty legend. Next door is a re-created woodworking shop of a famed local duck decoy carver. Open Tuesday to Saturday 11 a.m. to 5 p.m. General admission $5. Children 12 and under, active-duty military and members free.

Esoteric, engaging and educational, Captain Barry has a goal of getting people (especially kids) off their screens and into nature. His jam-packed two-hour boat tour includes opportunities to see, touch and even taste the wildlife around the island. Reservations required. Cash or checks only, no credit cards. Adults $55. Children under 12 $45.

The two-hour Southern and Northern Pasture Tour on a pontoon boat is a great way to see the famed wild horses from a close (but still respectful) distance, along with other wildlife, and to learn about the island's history. Adults $55. Children 12 and under $45.

A family-owned shop features eye-catching, hand-dyed yarns in distinctly Chincoteague hues, such as Foggy Morn, Seagrass and Jewelweed. Open Monday and Wednesday 10 a.m. to 3 p.m. and Tuesday 10 a.m. to 8 p.m.

A broad, well-curated range of new and used books, as well as the best postcard selection you can find on the island. Open Mondays and Wednesdays to Saturday 10 a.m. to 6 p.m. Open Sundays 10 a.m. to 5 p.m.

A fantastic array of used books, especially maritime-related titles, as well as vintage vinyl, mostly from the 1960s and '70s. Open daily 11 a.m. to 9 p.m. Operates seasonally between May and September; exact dates vary.