Ruining the Roller Coaster: Can the Appalachian Trail survive its pandemic popularity? Hikers along the hilly stretch of the Appalachian Trail known as the Roller Coaster take in the view at Bear's Den Scenic Lookout in Virginia this month. (Amanda Andrade-Rhoades/The Washington Post)

The beautiful days are the worst at the Roller Coaster.

When the skies are blue and the weather is cool, day hikers descend on this rolling 13.5-mile section of the Appalachian Trail, which cuts from Ashby Gap to Snickers Gap in Virginia. By 9 a.m., the gravel lots are crammed with cars. And by noon, the stragglers - anxious to get on the trail - park on the highway shoulder, or illegally on residential streets.

Sometimes the day-trippers carry loud stereos in their backpacks, or discard paper coffee cups, dog poop bags and other trash on the trail. When they run out of food and water or get lost, the paramedics are summoned.

Even before the worst public health crisis in a century, more than 3 million people a year hiked parts of the 2,200-mile Appalachian Trail, which rambles from Springer Mountain, Ga., to Mount Katahdin, Maine. But the pandemic has transformed the world's longest hiking-only footpath from a bucolic refuge to a linear version of Costco on a Saturday.

"The popularity of the Appalachian Trail has grown, but with the coronavirus, it just exploded," said David Weiss, chair of the board of supervisors in Clarke County, Va., home of the Roller Coaster. He described what's happening along his county's stretch of the trail as a "pretty severe crisis situation."

The onslaught of pandemic hikers has overwhelmed other places, too. On Reddit threads - "How bad are crowds on Franconia Ridge?" in New Hampshire - and on TripAdvisor, Yelp and outdoor apps like Guthook Guides and AllTrails, day-trippers trade horror stories about hours-long waits to park and how to avoid the hordes.

Sandi Marra, the president and CEO of the Appalachian Trail Conservancy, said the increased usage is most obvious on the trail itself: abandoned banana peels and aluminum cans, four-foot-wide trails that have suddenly doubled in size, the overflowing parking lots.

And then, Marra said with a sigh, there's Max Patch.

"It actually looked like a field at a music festival," Marra said of the popular Appalachian Trail campsite, located in North Carolina's Pisgah National Forest. "It was insane. People were up there with their dogs and tents and coolers and pavilion tents. That's why it got shut down."

It will be two years before the damage is repaired and campers can again pitch tents there.

All of this has created a headache for the army of volunteers who keep the Appalachian Trail as pristine as possible. Devotees of the gospel of "leave no trace," they're quick to say they're glad the newbies are embracing the outdoors. "The trail is for everyone," they intone.

But their sincerity is being tested. Unlike other national parks with a limited number of entry and exit points, the Appalachian Trail runs through 14 states and offers hundreds of access points, making crowd control challenging.

Yellowstone, Zion and other big national parks have experimented with timed entry tickets, reservation and shuttle systems, and closed entrances to handle the crush of visitors.

In June, the National Park Service reported that more than 31 million people had visited its 423 sites that month - so many that it warranted a Senate Energy and Natural Resources subcommittee hearing on congestion and overcrowding.

At the July hearing, photos were blown up and displayed on stands of cars wedged into lots and lines at Arches and Yosemite national parks.

Subcommittee Chairman Angus King (I-Maine) said he didn't have any immediate solutions other than to consider pointing visitors to less-crowded places.

"We can accidentally love our parks to death," said King, who invoked the throngs at Acadia National Park in his home state of Maine. "Watching the sun rise from the top of Cadillac Mountain is a wonderful experience. Staring at the taillights of the car in front of you as you're trying to get up the mountain and find a parking place? Not so much."

The Roller Coaster is not as renowned as Cadillac Mountain, but the path has still experienced its share of overcrowding. On a recent weekend, the trailhead at Snickers Gap reeked of sunscreen and insect repellent. A cluster of hikers blasted "Pumped Up Kicks" by Foster the People from a stereo. Families with small children - babies hanging from carriers, pudgy legs kicking - navigated the steep incline as orange butterflies flitted overhead.

A man in a white T-shirt leaned over, scooping a pile of dog poop into a bag, which he then left on the side of the trail. 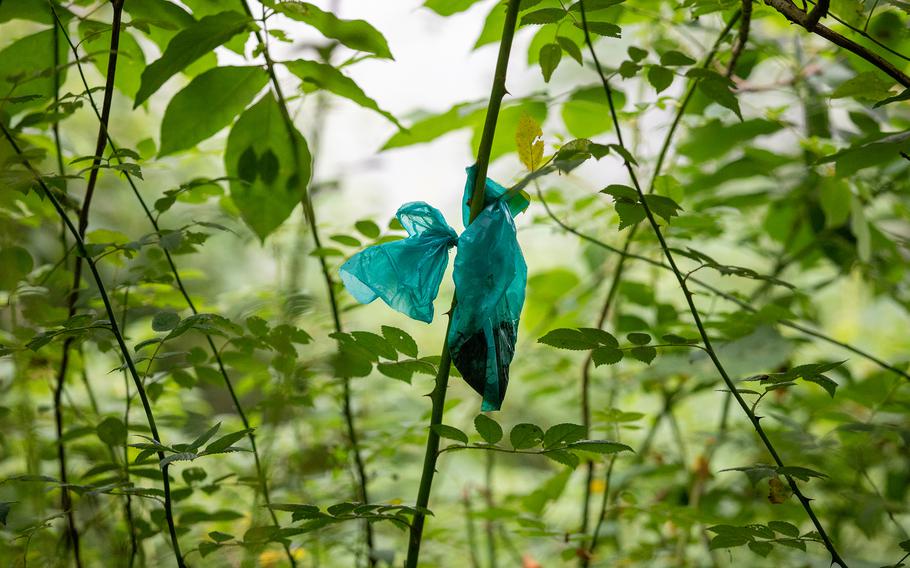 In the parking lot, Karen Balaban loaded her backpack with snacks. The 68-year-old said she hasn't been out hiking as much as she used to. She generally knows which trails everyone goes to and tries to stay away. But she was in the area for her niece's wedding and wanted to introduce her sister and a friend to the Roller Coaster. Balaban slammed her trunk - full of coolers and hiking gear - closed.

"So many people," Balaban said, stretching one pink-hiking-pants-clad leg. "You can really see the wear and tear on the trail."

The Roller Coaster is made up of nearly 3,800 feet of ups-and-downs near the border of Clarke and Loudoun counties. It wasn't opened until 1989 and got its unusual name from the registry used by the Appalachian Trail's famed thru-hikers, who spend months walking the entire trail.

"Today was a roller-coaster ride," thru-hikers continuously remarked of the stretch. The name stuck, eventually making its way into guidebooks and enticing more hikers to come out and see what the hype was about.

"Covid seems to have woken everyone up to the outdoors," said Chris Brunton, the crew leader who helped construct the Roller Coaster. "We get hundreds of hikers here on the weekend. It's really - let me say this first, I am really happy to see new people coming on the trail, especially kids - but I do wish they would learn to leave no trace. In 30 years, I've never had to pick up so much trash."

The area ridge runner - tasked with tending to the section of trail between Harpers Ferry National Historical Park and Shenandoah National Park - likens the Roller Coaster to the "Wild West."

For the past three years, Witt Wisebram has made $13 an hour picking up after other hikers. He sleeps in a camouflage tent and walks the entire trail weekly, tallying people and picking up used toilet paper "blossoms," cigarette butts, disposable masks, dirty diapers and, once, two pounds of uncooked shrimp left in a fire pit.

Increasingly, he has also encountered more and more soiled pants. He considers it a great mystery. How do these people make it off the trail without pants?

Wisebram, 37, theorizes they probably carry extra shorts in their backpack. His preferred method for collecting this manner of trash is spearing the cloth with "chopsticks," or two twigs, and dropping it into a Ziploc bag.

"My job is really making sure hikers are okay on the trail," Wisebram said. "But I also say I'm making sure the trail is okay from the hikers."

Ironically, eight months before the pandemic began, Clarke County had worked with the National Park Service to print thousands of brochures featuring six local day hikes, including the Roller Coaster. The agencies had hoped to lure more people outside. Now, faced with too many hikers, they have too few solutions.

"It's been a big shift, definitely," said Alison Teetor, Clarke County's natural resource planner. "We've had a lot of phone calls and discussions about there being too many people, and what are we going to do about it? But there's not a lot you can do."

Though they've discussed building another parking lot, space is limited. It is, after all, a mountain. Besides, ​​Teetor explained, "we don't want to build a parking lot for 100 cars, because then you'll get that many people for that spot."

Instead, they've focused on regulating parking, which she said has posed the biggest issue.

"Don't park illegally," she warned. "If there's no parking, go somewhere else. You can't just park where there isn't any parking."

Travis Sumption, chief deputy at the Clarke County Sheriff's Department, said people have even left their vehicles near Highway 7 and walked with their children across all four lanes to reach the trailhead - despite the 55 mph speed limit. To combat this, the state Department of Transportation staked "no parking" signs on the roadside.

Yet people have continued to park - this time, beneath the signs instructing them not to do so. At first, the only way to enforce those signs, Sumption said, was to tow vehicles in violation - but that could cost more than $500 and cause a great inconvenience to everyone, including the towing companies who sometimes refused to drive up the pass. Instead, Clarke County enacted a parking violation ordinance for the area of the Roller Coaster. The cost of a ticket is $30.

That seemed to solve the issue on Highway 7, Sumption said, but not on secondary roads. Those are still a problem.

On a recent morning, though, hikers seemed blissfully unaware of the dilemma their presence posed.

A mile up the trail, Anju Singh, 42, settled on a rocky outcropping with her sister, Anita Singh, 46, who was visiting from Florida. The horizon was hazy, the valley below dotted with green trees and bald lawns, the gray highway looping through tilled fields.

A woman in a black backpack took a photo with two toddlers. A family of four shared a small bag of grapes. Anju adjusted the sunglasses perched on her head and drank from a blue water bottle.

"My sister picked out this place," said Anju, who lives in Fairfax County. "She just Googled things to do and it popped up."

"I love to hike," Anita added. "But there are no mountains in Florida, so beach walking is what I'm used to. I love how much hiking is here. It was a great pick."

As they turned to leave, returning downhill to the trailhead, another car turned off the highway and into the parking lot.