How the Big Easy is making its big comeback 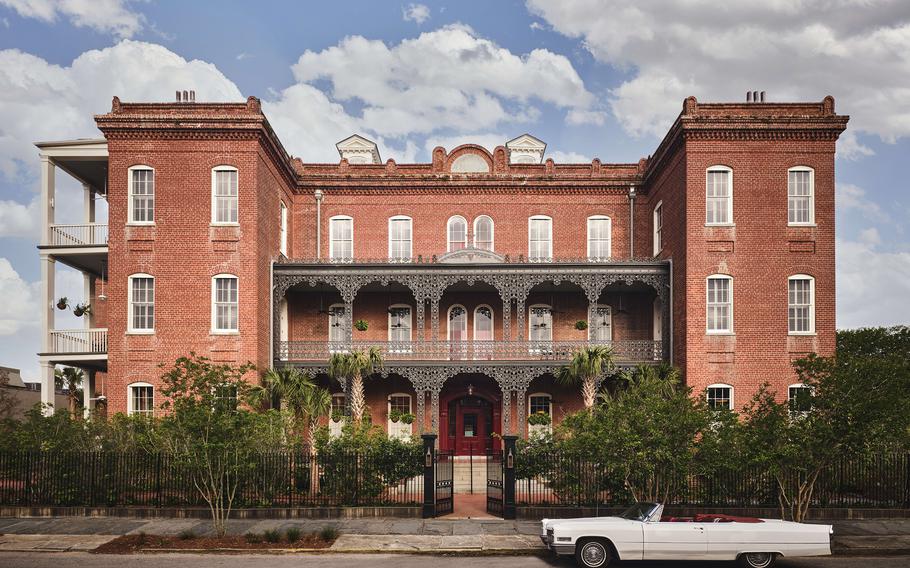 The Hotel Saint Vincent, which opened in the Lower Garden District of New Orleans in June. (Douglas Friedman/The Washington Post)

"In New Orleans, everything is a good idea," wrote Bob Dylan, offering the city's architectural quirks as evidence. It's still true, and a flurry of new hotels there blend whimsy, eclectic grandeur and funky design to charming effect. And after a crushing year for tourism, a steady stream of visitors is now coming back to enjoy them.

"It's probably improving faster than we thought it would," said Mark Romig, chief marketing officer of New Orleans & Company. Two of spring's musical highlights have been rescheduled for fall - New Orleans Jazz & Heritage Festival and the French Quarter Festival - and Romig's organization is fielding inquiries for trips well into 2022.

That's cause for hope in a city that runs on hospitality; Romig estimates it accounts for 40 percent of New Orleans' revenue. Average hotel occupancy has risen each month in 2021, reaching 56.8 percent in May, according to global hospitality data and analytics company STR. Vaccinating hospitality workers is key to safely sustaining the revival, Romig said, adding that Orleans Parish vaccination rates outpace statewide numbers. (Among the least-vaccinated U.S. states, Louisiana is seeing a spike in coronavirus cases.)

For now, visitors have uncrowded access to fresh art destinations and a new museum, and they can enjoy their pick of recently debuted hotels, such as the 75-room Hotel Saint Vincent, a fantasia of marbled wallpaper and red velvet bed frames that became a design landmark when it opened in the Lower Garden District this June. Lacy ironwork adorns a stolid brick exterior, giving way to an inner courtyard pool fringed with tropical plants.

Dark woodwork and tangled greenery abound inside the Chloe, a 14-room boutique hotel that opened in October in a 19th-century Uptown mansion. A maze of rooms and private nooks suggest languid afternoons indoors, but non-guests can sip tropical drinks (with no reservation) at the pool bar or book a palmetto-shaded pink lounger for daytime swims.

Blocks away is the 20-room Columns, carefully renovated and reopened in December with an abundance of patterned wallpaper and original artwork throughout. Cocktail service for guests extends to a rooftop sun deck and garden seating; anyone touring nearby mansions can stop by the clubby bar, whose gleaming mahogany and red leather are invitingly dim.

More hotels are forthcoming. The Four Seasons Hotel, with a combined 341 rooms and suites, opens in late August in a 34-floor tower designed by mid-century New Formalist architect Edward Durell Stone. A rooftop pool deck overlooks the Mississippi River below, and the lobby's Chandelier Bar will serve sparkling wine under a glittering chandelier that measures 20 feet across.

Even a luxe hotel is just a home base in New Orleans, where there's plenty to keep travelers out late. Music fills the French Quarter once more; in June, historic Preservation Hall held its first live show in 15 months.

With a mission to spread joy, art and music, JAMNOLA art gallery opened in August across the street from artist Brandan "B-mike" Odums's landmark Studio Be. "It's 12 exhibits that take you on an upside-down, topsy-turvy stroll through the city's cultural gems," said JAMNOLA founder Jonny Liss, who worked with 29 local artists and creators to design the experience. A visitor poses for a photo at the JAMNOLA art gallery, which opened in August. (JAMNOLA/The Washington Post)

Surreal elements abound in photo-friendly gallery rooms: Climb into a bathtub with a giant crawfish, or take a bite from an oversize po' boy sandwich. (Find more social media fodder at the French Quarter's ARTmazing Selfie Gallery, which opened October with a colorful array of interactive photo backdrops.)

A less-known side of Southern culture is on display at the Museum of the Southern Jewish Experience, which was founded at a Jewish summer camp in Mississippi, then closed for nearly a decade before reopening this May in New Orleans. "It was started in an effort to preserve the disappearing small-town Jewish communities all over the South," said executive director Kenneth Hoffman. After watching an introductory film, visitors browse treasures, including an 1885 crazy quilt made by the Jewish Ladies' Sewing Circle in Canton, Miss., who raffled it off to fund its local synagogue.

Not everything is old-timey. Among Hoffman's favorite exhibits is a parade favor, or "throw," made by Krewe du Jieux, New Orleans' first Jewish Mardi Gras organization. It's a gold-painted bagel adorned with a glittery, blue menorah.

Most bagels are ephemeral; this one is an artifact. "We'll see how long it lasts," Hoffman said. "If it gets funky, we'll ask the krewe to make us another one."