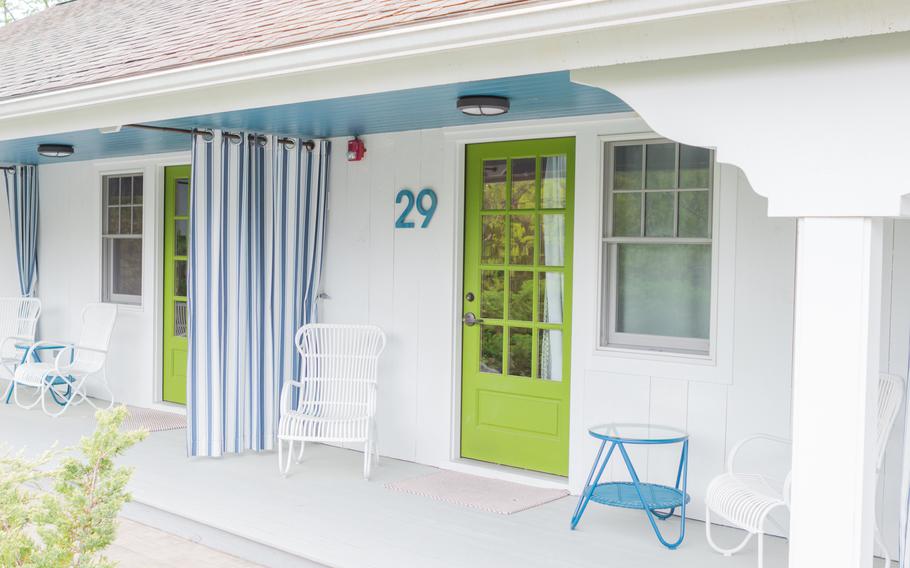 Who says roadside pit stops have to be boring? This summer, road-trippers looking for stylish accommodations that won't break the bank, something between upscale luxury and side-of-the-highway corporate chains, are discovering a new trend: neglected mid-century motels that have been transformed into affordable, hip places to stay.

Motels, also referred to as motor lodges, evoke an era of optimism when gas was cheap and families piled into cars and hit the open road. Indeed, nostalgia and wanderlust seem to be - ahem - driving the trend to develop these properties.

"Nostalgia evokes a simpler time, a time of Polaroid cameras and memories of what it's like to be a kid," said Krista Stokes, the creative art director who spearheaded the project to transform the Lodge on the Cove in Kennebunkport, Maine.

"When you drive up to a motor lodge, you can't help but feel like you're in a different era. It's a place to daydream," Stokes said.

Daydreaming was a vital pandemic activity for Rob Blood, founder and president of Lark Hotels, who - while isolating at home - experienced a compelling urge to get out on the road. Blood's memories of summer vacations in his parents' Grand Wagoneer led him to create a sister brand, Bluebird by Lark, a midpriced collection of motels, surf shacks and ski lodges inspired by road trips of bygone days.

"Driven by social isolation after the past year, people are looking for spots to go to spend quality time together. Places that are family-friendly, friend-group friendly," Blood said. "Providing beautiful spaces to use as waypoints makes the journey as important as the destination," said Blood, adding, "It feels of this moment."

Jayson H. Seidman, founder and managing partner of the Drifter Hotel in New Orleans, also remembers staying in motor lodges on family road trips. Even as a kid, he loved the social aspect of seeing people coming and going. After spending most of his adult life "traveling all over the world," he confesses, "motels are my passion."

The Drifter is the second of three motel conversions that Seidman has undertaken within a larger hotel development portfolio. (The other motels include the Thunderbird in Marfa, Tex., and the Ranch Motel, in development in San Antonio.) Located in a rapidly growing mid-city neighborhood, the Drifter sits at the end point of the old Highway 61, known as "the Blues Highway."

"Everyone in town thought I was crazy to open on the outskirts of town," Seidman said.

Nevertheless, he was drawn to develop the property, a continuously operating hotel since the '50s, and named it as an homage to the Beat Generation of postwar America.

During the year-long project, Seidman ripped out carpeting, put in tile floors, retiled bathrooms, beautified finishes and added new bedding in all 20 rooms. In the former lobby, a stunning terrazzo floor underneath a 1980s renovation "revealed itself."

"I'm into preservation more than renovation. There are so many great stories in those walls," Seidman said.

To "shake things up a bit," Seidman removed concrete and converted parking areas into a tropical landscape. He excavated the dirt-filled swimming pool and brought it back to life, creating a Swim Club where locals and hotel guests can mingle while enjoying specialty coffee, Japanese beers and sakes, cocktails, and international cuisine from local food trucks. The result is an atypical New Orleans experience, designed to "remind people of other places they have traveled."

During South Florida's period of rapid growth in the 1950s, Biscayne Boulevard was described as "The Motel Capital of Miami." A drive today from 50th Street to 77th Street in the designatedMiami Modern Historic District - known locally as MiMo - still offers glimpses of the flamboyant and optimistic postwar architecture.

In addition to the renovated 1953 Vagabond Motel, listed on the National Register of Historic Places, the strip is home to the sprawling Selina Miami Gold Dust. Retro signage, tropical neon and playful decor capture the spirit of the original 1957 Gold Dust Motel, a location poised for popularity when Hugh Hefner opened his first satellite Playboy Club directly across the street in 1961.

"We wanted to stay true to its origins as historical landmark on Biscayne Boulevard, combining iconic retro vibes from the past with today's cultural diversity that looks to the future," said Victoria Winter, the "experience director" for Selina hotels in the United States.

Utilizing the existing space and structure, Selina (a company that operates more than 70 hotels around the globe) did a full property rehab, including changing the layout of the pool. Room types, from shared community spaces to private suites, are designed to accommodate many varieties of travelers. 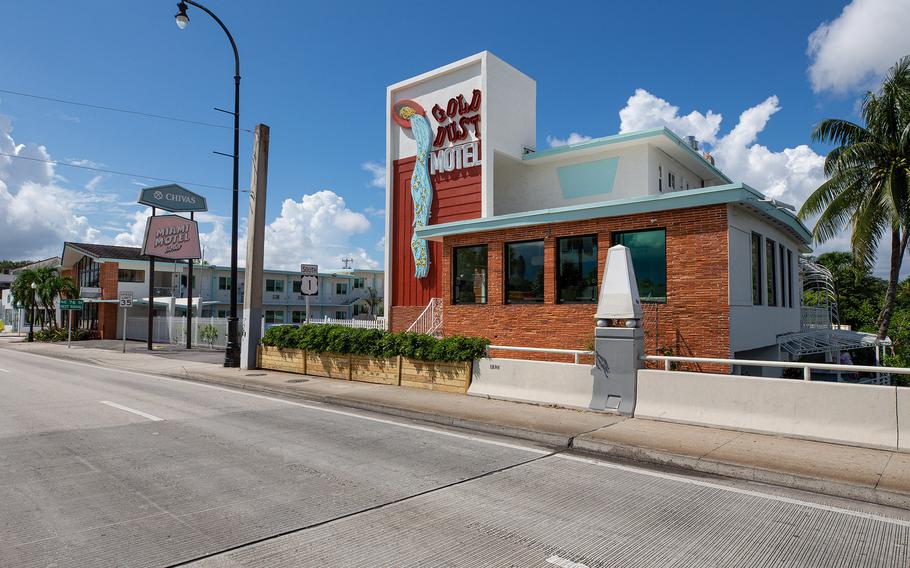 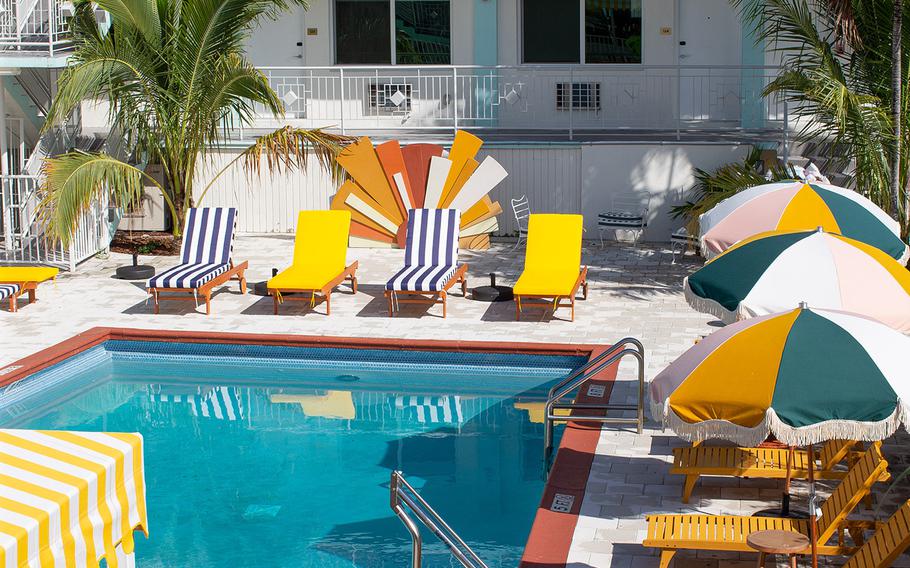 "It's a place where CEOs can meet backpackers from South America while sitting at the pool," Winter said.

A revitalized dining space with a river view, helmed by Miami chef Matt Kush, retains a funky vibe while serving diverse bistro dishes such as croque-monsieurs, Kush classic burgers, chicken and waffles, and key lime pie. Signature cocktails, international wines and local brews can be had below the cafe at Don's 5 Star Dive Bar.

In Nashville, a 1956 motor inn collides with 1970s disco and romantic nostalgia in the Dive Motel, a 23-room eye-popping wonder where each uniquely designed accommodation might contain any of the following: '70s wallpaper, vintage furniture, shag carpets, wood paneling and soaking tubs in a variety of bright Pantone hues.

The one thing all rooms have in common is a custom-made disco ball - crafted by Yolanda "Yo Yo" Baker, famous for her work for Studio 54 - that spins to the tunes of "Dive Radio," offering four channels: sex, drugs, rock-and-roll and sleep.

"The design is anything goes, with decor from all eras. It doesn't have to make sense as long as it's fun," said Lyon Porter, owner and designer of the property.

Porter, who also founded and operates the Urban Cowboy portfolio (with hotels in Nashville and the Catskills), discovered the run-down motel in an area of town undergoing transformation while looking for a place with a pool.

"A motel means different things to different people. Guests in their 80s say, 'Oh, I remember staying in motels.' In their 40s, it means something else. And people in their 20s may never have stayed at a motel," Porter said.

Because of the pandemic, it is the first full season that the pool and Swim Club are open for swimming, partying and dancing. The just-launched Dive Taqueria features meat and vegetarian tacos, quesadillas, tamales, pupusas, ceviche, and frozen and classic cocktails.

"Nashville is the capital of a good time in the U.S. After the pandemic, it's the Roaring Twenties again," said Porter, who expects a busy summer season. "Everyone is excited to be alive right now."

The Lodge on the Cove

Family-friendly resort with 30 rooms and swimming pool in rehabbed classic motor lodge, nestled in a wooded cove in Kennebunkport. On-site bar and restaurant. Rates from $389.