Inspired by nomads' shelter, yurts take the edge off camping 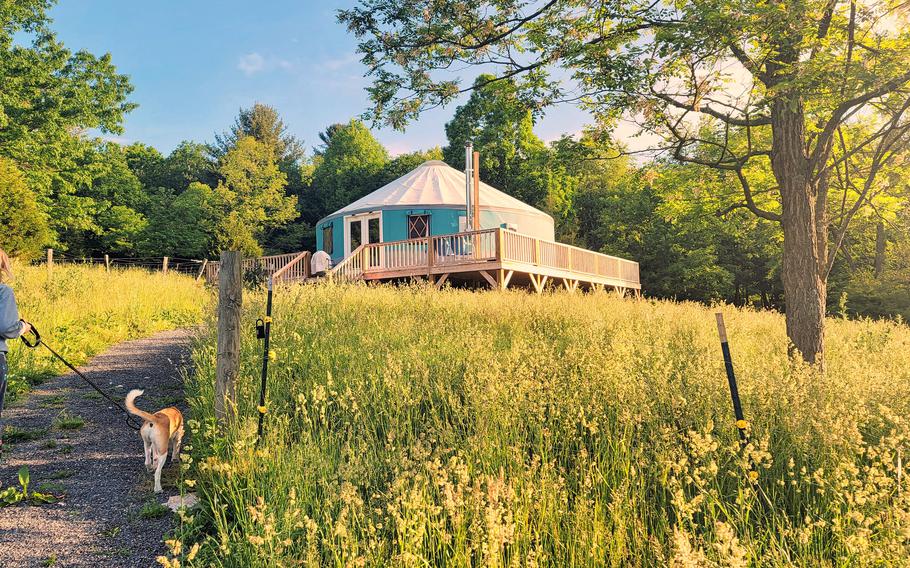 Yurts date from thousands of years ago but are now part of the glamping trend. Russell Prechtl and his husband, Craig Freeman, built Solar Solitude last year and started renting out the West Virginia property in March. (Christian Arriola/The Washington Post)

On a spring afternoon deep in West Virginia, Frankie ran around and around and around the deck of Solar Solitude, a rental yurt. To the uninformed observer, the Puerto Rican rescue dog, a guest at the property, was chasing an imaginary squirrel. But I knew better. Frankie was embracing one of the hallmark traits of the yurt: its roundness.

The pandemic has pushed us outdoors, but when it's time to come in, we don't want the same old four walls. Unusual lodgings have become commonplace, and few more than the yurt. The Airbnb Report on Travel & Living, which the company released in May, noted a 31% increase in the number of unique accommodations since 2019; the collection now exceeds 170,000 listings. Demand has risen with supply: According to the study, searches for rentals in this category has grown 94%, and interest in yurts has surged by about 1,700% — more than earthhouses, barns and tiny homes. Campspot has noticed a similar upswing. The booking site for outdoorsy stays features more than 100 yurts in a variety of settings, such as a gnome-themed campground in Pennsylvania and the grounds of a reproduction fort along Colorado's South Platte River. Over the past year, the company noted a 13 percent higher occupancy rate for yurts than for other types of accommodations at vacation spots with mixed lodging styles.

"Yurts are having their moment. They have that cool factor," said Dana "the Yurt Girl" Hendel Morgan, a design and sales consultant with Seattle-based Rainier Outdoor, which builds the structures. "It's just blown up, especially with glamping on the rise."

Ah, yes, glamping, where "roughing it" means having to flick the bug off your duvet cover or throw another Duraflame log on the fire. The muffin-top-shaped dwellings are part of this trend, which is still going strong more than a decade after landing on our shores from Europe. Last year, 4.8 million households with first-time campers tried glamping, up from 1.3 million in 2019, according to Kampgrounds of America's 2021 North American Camping Report. Travelers are clearly seeking nature-centric escapes that feel more like a snug cashmere throw than a scratchy wool camping blanket.

"Yurts remind me of being a kid again," said Colin Sternagel, who lived in Mongolia for seven months before founding SunTime Yurts, which imports the shelters from the Central Asian country. "They are like the ultimate fort made of blankets and have the coziness of a [Volkswagen] Westfalia, but are better insulated." 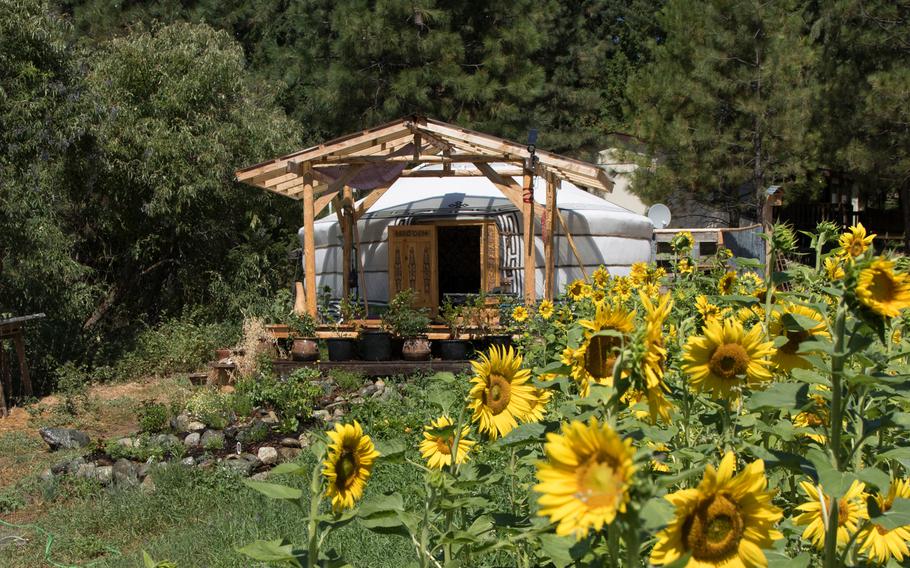 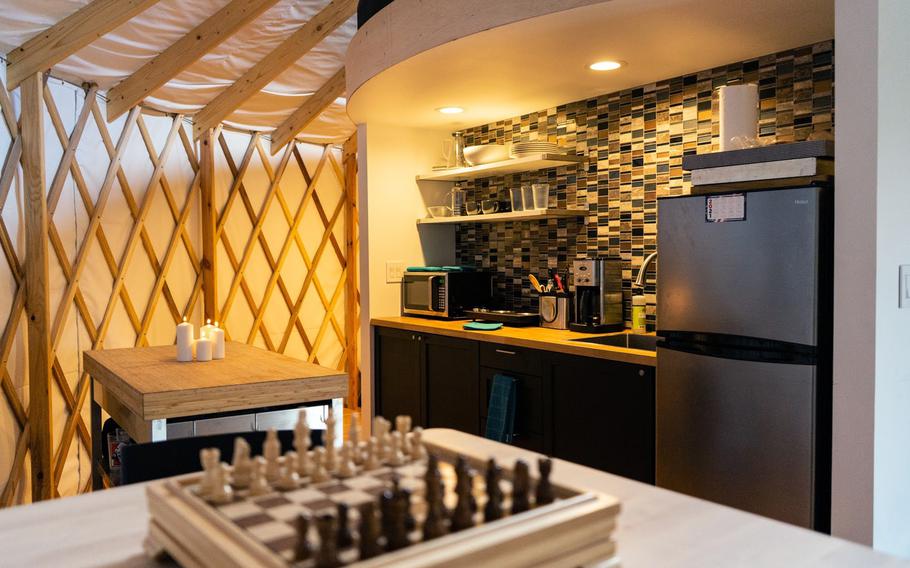 From the outside, Solar Solitude resembles the round homes of Mongolian nomads. Inside, it has all the amenities and conveniences of an urban dwelling. (Emily Prechtl/The Washington Post)

Much like tents and cabins, yurts weren't — and still aren't — always cushy affairs. The felt-and-wood homes originated in Mongolia several thousand years ago as mobile lodging for nomadic herders living and working on the Gobi Desert steppes. Mongolian ruler Genghis Khan used gers, the local word for the structure, on his military campaigns. The yurt's main selling points are its portability, durability and quick assembly. Paula Sabloff, a political anthropologist who curated the traveling exhibit, "Modern Mongolia: Reclaiming Genghis Khan," said a Mongolian family can break down and erect a yurt in less than an hour. (By comparison, Solar Solitude took five months to build. Blame the contractor.)

"A friend once said that one is not a true Mongolian man if he cannot assemble a yurt," Sabloff said. "He was, of course, Mongolian."

The yurt's simple structure belies its sophisticated engineering. The latticework walls, door frame, rafters and center ring all work together to create compression, tension and balance. The canvas or vinyl cover helps keep the yurt warm, cool or dry, depending on the weather. Of course, you would never know the genius from a passing glance. When I first drove up the long gravel driveway to Solar Solitude, I wondered if I had booked a circus tent or, based on its color, Papa Smurf's mushroom house.

"Everybody is really curious about it, even if they don't know it's called a yurt," said Russell Prechtl, who with his husband built Solar Solitude last year and started renting the property in March. "They want to know why it doesn't get blown away in high winds." (This is why: The wood frame is bolted down, and the fabric is attached to the foundation via a large metal coil on the perimeter.)

A neighbor I met puzzled over an interior decorating detail. "It must be hard to hang pictures in there," a guy in a pickup truck observed while I was walking Frankie. It isn't: Pretchtl and his husband, Craig Freeman, attached prints from the Lost River Trading Post in nearby Wardensville to the wood frame. And no, the artwork isn't curved.

To be sure, one of the yurt's most defining — and charming — characteristics is its roundness. The circular space feels open and airy, with no hard corners or sharp divisions to disrupt the flow. At Solar Solitude, I felt as if I were riding on a self-propelled carousel that frequently stopped in the kitchen, bathroom, office and den. I only had to leave the sphere to climb the staircase to the bedroom loft. But the domed skylight restored the harmony.

"Every pre-modern culture has celebrated the circle. It's very powerful," said Peter Forbes, who rents nearly 20 yurts on his Knoll Farm in Vermont. "There are few right angles that exist in nature and tons in human culture. You are more connected to nature in a yurt."

Forbes was a longtime friend of Bill Coperthwaite, who is to yurts what Henry David Thoreau is to one-room cabins on ponds. The Maine homesteader, who earned a doctorate in education at Harvard, introduced the country to yurts after reading about the Mongolian buildings in a National Geographic article from 1962. He experimented with the traditional model, replacing the felt with wood panels, for instance, and adding multiple stories to the typically ground-level structure. Coperthwaite, who died in a car crash in 2013, explained the purpose of his yurt mission in his 2002 book, "A Handmade Life: In Search of Simplicity." "The main thrust of my work is not simple living — not yurt design, not social change, although each of these is important and receives large blocks of my time," he wrote. "My central concern is encouragement — encouraging people to seek, experiment, to plan, to create, and to dream."

The octogenarian left behind more than 300 yurts around the country, plus a number of disciples — intentional and accidental — who are carrying on his legacy. Prechtl is among the latter group. "The yurt is a great low-cost alternative to camping that brings you closer to nature," he said. "It's absolutely required for your sanity."

My yurt count is nowhere near Coperthwaite's. My first experience was in the motherland itself, Mongolia. Our entourage of Americans and Mongolians bundled into sleeping bags set atop animal hides. We arrayed ourselves around a fire that none of us stoked during the night. I awoke with an icy nose, the only body part exposed to the frigid air. My next stay was in a New Jersey state park that rented yurts with bunk beds — an upgrade in comfort but still thin on amenities. I stargazed through the skylight, inches closer to Orion than my friend who chose the bottom bunk.

The West Virginia property was gilded luxury compared with the other two. Everything we needed — sectional couch, kitchen island, French press, rain shower head, WiFi — was under one conical roof. When the temperature dropped, we lit the wood-burning stove and plugged in the space heaters. When the sun came out, we rolled up the flap windows and pulled out the deck lounge chairs. When it started to rain, we moved our activities inside. I read under the dome while Frankie resumed her laps, running around and around and around the indoor track.