The Royal Hotel looks innocent enough from the outside, but looks can be deceiving. (David Allen / S&S)

The Royal Hotel looks innocent enough from the outside, but looks can be deceiving. (David Allen / S&S) “The Ghosts of Okinawa,” by Jayne A. Hitchcock, is one of the best guides to Okinawa’s haunted sites. () 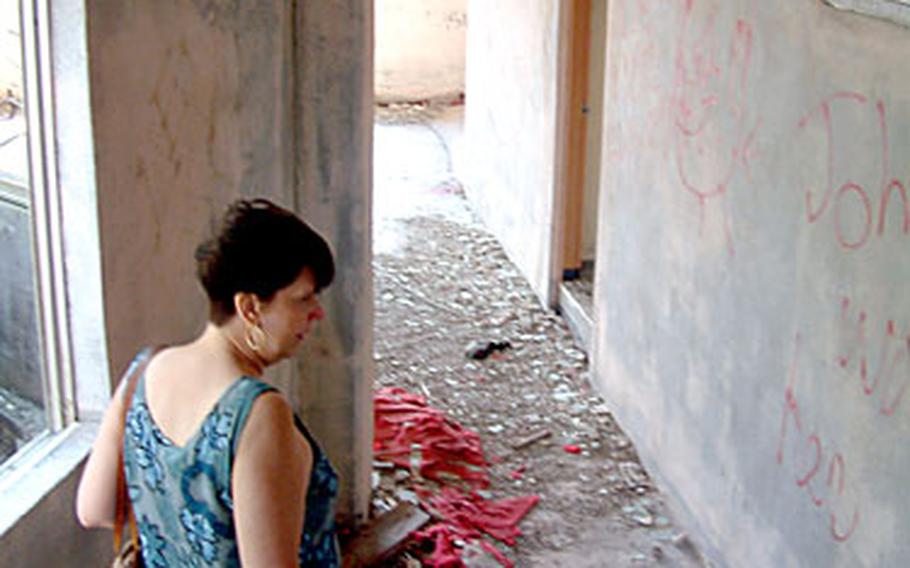 Is that a trail of blood leading down a hall in the haunted Royal Hotel ruins in Nakagusuku, Okinawa? Nah, it’s just a moldy old carpet. But spirits are said to still slink around the complex, which was left unfinished when workers mysteriously died during construction and the developer went insane. (David Allen / S&S)

The island of Okinawa is one scary place.

Okinawa is haunted. All you have to do is drive around and see buildings left unfinished because some spirit has made its presence known, or a house abandoned because some ghost scared its occupants. There are so many such spooky sights on Okinawa that both Kadena Air Base&#8217;s 18th Services Squadron and Marine Corps Community Services have special Halloween tours that sell out weeks in advance.

Want a good fright on Halloween night? There&#8217;s plenty to choose from.

Kadena Air Base has two creepy haunts. There&#8217;s a small house, number 2283, behind the Kadena USO that is now used for storage because few people could stand to live there. It is said it was built over an ancient burial ground and the souls of those once buried there can never find rest.

The house is smaller than the others in the area because one room was so cold that no one could sleep there and it was torn down. And, to add to the horror, an officer beat his wife to death inside the house sometime in the early 1970s.

Or was it a teenage girl stabbed to death by her stepfather? No one is sure anymore, and the tour guides like to tell both stories &#8212; and the one about the Samurai warrior who rides his steed through the living room.

Hitchcock was so taken with the stories of the spooky Kadena house that she held a s&#233;ance there on Oct. 31, 1994. She claims she saw the ghosts of two children who talked about being afraid of a man on a horse.

The other chief haunted site on the air base is the golf course, where legend has it that 17 high school girls pressed into the service of the Japanese Imperial Army committed suicide when the Americans landed on nearby beaches on April 1, 1945. Some people have reported hearing wailing coming from the area late at night.

And don&#8217;t count the Marine bases out. Hitchcock&#8217;s book mentions her own personal spook, a sailor in a peacoat she called Mike who lounged around her Camp Foster home, playfully pitching pennies and guitar picks at unsuspecting guests and her husband. She never did find out why he was there.

Then there&#8217;s the samurai warrior who is said to trudge uphill toward Futenma Housing on Camp Foster from Stillwell Drive. He looks mean, but seemingly never pays attention to the cars that pass by.

Perhaps the best-known Okinawa haunt, though, is the skeletal remains of the Royal Hotel on the ruins of Nakagusuku Castle, near Camp Foster.

The story says a Naha businessman convinced villagers that he could attract tourists to the castle ruins by building a zoo next door. Admission fees were to go toward restoration of the 13th-century castle. Then came the 1975 Okinawa Memorial Exposition, and the greedy promoter expanded the plans to include a luxury hotel on the hillside.

Villagers warned him that the grounds were sacred, but he ignored them. Soon, the project, designed as an elaborate resort village with a casino and water park, began to take shape. The man poured millions of dollars into the project, but work was hampered when monks at the nearby Buddhist temple told him he was building too close to a cave inhabited by restless spirits.

Some of his workmen left when they heard the warnings, others abandoned the site only after several workmen died in mysterious construction accidents

Setsuko Inafuku, a tour guide from Kadena Air Base, notes that the businessman went bankrupt, fell ill and later went insane. The haunting at the hotel was so severe that one of the monks decided to live for a while in one of the hotel&#8217;s unfinished rooms and built a small altar to appease the spirits.

Some people say the businessman went insane long before construction halted. The hotel is a maze of stairs that go nowhere and dead-end, graffiti-filled corridors leading to rooms where old mattresses, moldy tatami mats and broken pieces of furniture lie scattered about.

Today the site is a popular spot for teens playing &#8220;dare me&#8221; games on moonless nights and urban warriors stalking each other with pellet guns.

Small shrines set up to appease the spirits can be found throughout Okinawa.

For example, near Kadena Air Base, there is an altar built alongside the Okinawa Expressway where it goes through a hill in the Chibana district of Okinawa City. When the national government designed the toll road that stretches from Naha to Nago, no one paid much attention to the &#8220;fairy&#8221; tales told about the hill, which had been used since ancient days as a place of prayer.

However, after several construction workers died after dynamiting a pass through the hill, the shrine was set up. According to a local historian, the accidents stopped soon thereafter.

There are many tales of ghosts hailing cabs to take them on their ghostly journeys. Shoji Endo, a former professor of Japanese literature at Okinawa International University, collected thousands of such tales before he retired recently.

One of his favorite stories was the tale of a woman holding a small baby who hailed a rickshaw one night in 1931 in Naha, the prefecture&#8217;s capital. The rickshaw man took her across the city. He dropped her off at a new home and waited patiently while she went inside, promising to return with his fee. After a few minutes he knocked on the door of the home and a man answered.

When the rickshaw driver explained what had happened, the man sighed deeply and handed him his fare, explaining that the woman and baby were his wife and son, who had died some years before. Every now and then, he said, they caught a rickshaw from their old home to the man&#8217;s new abode.