Doing my part to thwart the Roomba robot takeover 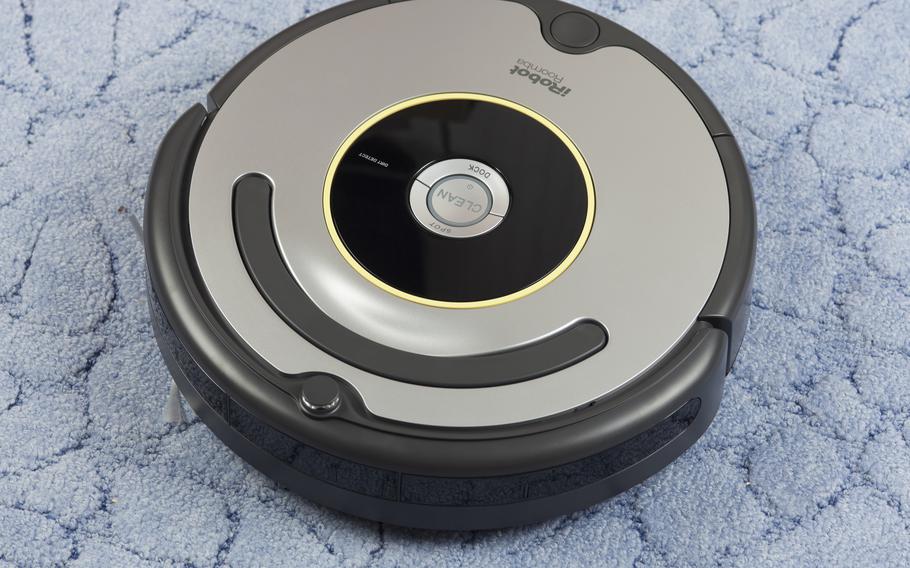 Before I sit down to write my column, I tap the button on my Roomba robot vacuum cleaner with my toe. It activates and emits a series of beeps before backing off its docking station and fastidiously following my unspoken orders. There’s something comforting about the soft whirr of its motor rambling, bumping and pivoting around my house.

My Roomba inevitably gets stuck under the buffet and calls out “Error!” for my assistance. After coming to its rescue, I plop onto our couch with a sense of security. “Things are being taken care of,” I think to myself.

Moby, our yellow lab, disagrees. While sitting at my feet, he side-eyes the suspicious object traversing our foyer, sucking up tiny tumbleweeds of carpet fuzz, dirt and dog hair. It soon enters the family room, making a beeline for my Birkenstocks. Just as I take a sip of my pumpkin spiced coffee, Moby leaps onto the couch beside me.

“Moby, it won’t hurt you, you blockhead!” I exclaim, grimacing at the fresh stain on my cotton sweater.

If you don’t own a robot vacuum cleaner, you probably find this scenario somewhat odd. You’re probably wondering why any sane person would assign human personality traits to a simple household appliance. I may be crazy for forming an emotional relationship with my Roomba, but I am not alone.

More than 40 million people around the world have purchased Roomba robot vacuum cleaners since an MIT professor and two dweeby students invented them two decades ago, not to mention others who bought robot vacuums made by competitor brands. Researchers have found that human owners tend to personify their robot vacuums, assigning them as male or female (we believe our Roomba is nonbinary), giving them names (my favorites: Meryl Sweep, Rosie, Lurch, Optimus Grime, Vlad the Inhaler, Dirty Hairy, Alice and Dustbin Bieber), and forming emotional bonds (one owner even introduced his Roomba to his parents as his new girlfriend).

Roombas have made their way into our hearts and pop culture, as evidenced by internet videos of Roombas terrifying dogs and transporting cats, and recurring “Parks and Recreation” sitcom character “DJ Roomba.” However, many robots are portrayed as scary machines programmed to kill, like HAL, Terminator and Ultron. No wonder there are disturbing internet posts of Roombas strapped with knives and chain saws, with captions like “Alexa, intruder alert, release the Roomba!”

Speaking of Alexa, Amazon’s Wi-Fi-connected smart speaker is not to be trusted. I refuse to upgrade my 600-series Roomba to a Wi-Fi-capable model that can scan, map and memorize my home’s interior layout and communicate with Alexa for optimal cleaning. My old-school Roomba can’t receive commands from our Alexa, which of course, prevents them from conspiring to kill me and conquer the human race. I’d much rather have my dim-witted Roomba bouncing blindly against my furniture and leaving swaths of dirty floors in its wake than risk robot world domination.

My phone, television, computer, microwave, refrigerator, thermostat, toothbrush and thermostat are Wi-Fi connected, but unlike my Roomba, they can’t move around the house. I certainly don’t want my mobile Roomba to buddy up with Alexa, turn against me and become a human battering ram.

“Police are looking into the mysterious death of housewife Lisa Molinari, who was found fatally pummeled on the kitchen floor of her home on Wednesday. No suspects have been named in the case. However, the medical examiner identified what appeared to be miniature tire marks on the victim’s body. No witnesses have come forward to make statements, although it was reported that an Alexa device on the victim’s kitchen windowsill emanated an evil snicker. …”

As I sit on my couch tapping away at my laptop, I hear my Roomba emit a familiar sing-song tune, indicating that it has finished its task and returned obediently to its docking station. I’m not sure if my robot is good or evil, male or female, threatening or harmless, high tech or low budget. All I know is that it sucked up a heckuva lot of dog hair while I wrote this column, and for that, I am grateful.